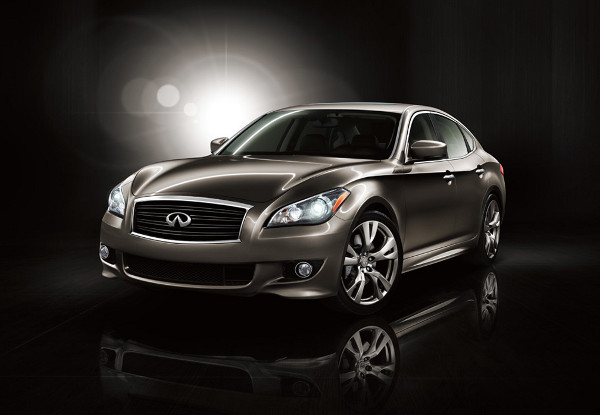 While the name Infiniti may not be the first the comes to your mind when you think of luxury cars, but the 2011 Infiniti M might bump up that trademark in your personal mindshare.  The new Infiniti M was revealed on Friday at the Concours d’Elegance in Pebble Beach, California.  M will optionally feature a 400hp V8 engine, giving this one the get-up-and-go to compete with most sports cars on the market today.  While this road kitten isn’t on the market just yet, luxury enthusiasts can enjoy a closeup below…  [thanks autoblog]

PEBBLE BEACH, Calif. (Aug. 14, 2009) – Infiniti today provided an advanced look at the all-new 2011 Infiniti M performance luxury sedan at the 59th Annual Pebble Beach Concours d’Elegance. This is the third generation of Infiniti’s popular M and the first to be sold across all of Infiniti’s 32 markets around the world, including Western Europe.

Like the current Infiniti M, the next-generation design will be offered with V8 and V6 engines. The 2011 M models will be designated the Infiniti M56 and Infiniti M37 respectively, reflecting their more powerful, larger displacement engines. The M56 V8 is expected to offer more than 400 horsepower. For Western Europe, the M56 will be replaced by a V6 performance diesel.

The 2011 Infiniti M also features a completely redesigned body, with authentic sports sedan proportions and evocative new styling with a low front end and deeply sculpted fenders inspired by the Infiniti Essence concept car. The new M interior promises to be pure Infiniti, highlighted by the use of innovative materials, an advanced climate control system, superior audio and an enhanced quality feel. Despite improved performance from the new engine lineup, fuel consumption will be reduced.

In addition, the 2011 M will continue Infiniti’s technology innovation leadership with a blind spot intervention system. This industry-first system is designed to help alert the driver if another vehicle is detected in an adjacent lane during an intended lane change, and then help assist the driver in returning the vehicle toward the center of the original lane of travel.

The 2011 Infiniti M, which is scheduled to go on sale across the world starting from spring 2010, was revealed through a unique “video mapping” process – in which a “virtual M” was created on a 3D form. It is the world’s first “virtual only” (no physical vehicle) automotive application of this cutting-edge technology. The 2011 Infiniti M will make its official public debut later this year.

Architecture
10 Re-habbed Homes That turned Ugly into Unbelievable
TheCoolist is supported by our readers. When you buy through links on our site, we may earn a commission. Learn more.
Let's connect
What’s Hot
Join TheCoolist
100% free, unsubscribe anytime.