Dan Hanebrink has the right stuff to build the all-terrain electric bike of tomorrow.  Not only is he a national champion cyclist and a bicycle innovator, he’s also a NASA aerospace engineer.  Hanebrink has fused these points of inspiration to develop the Hanebrink Electric Bike, an all-terrain pedal-assist vehicle that is one part bicycle, one part motorcycle and one part Mars rover.  The electric motor on the Hanebrink Electric Bike will serve up a steady 20 mph with pulses toward 40 mph while pedaling.  A single, 3-hour charge of the Hanebrink’s battery will get you a 100-mile riding range over concrete, sand, dirt or snow.

While the speed and range stats are impressive themselves, the style factor of the Hanebrink Electric Bike is just as drool-worthy.  A bold, mean fork and a pair of thick, chunky tires are as visually forceful as they are functional, giving this bike the absorbency and the terrain contact to hit the hills or the pavement.  The sleek black paint job and high seat complete the look for a bike that will turn heads on the open road.

The Hanebrink Electric Bike’s power train is centered on a mid-mounted motor that is mated to a pedal-assisted 14-speed gearing system.  Whether you’re cranking the throttle, hitting the pedals or both, a shift of gears provides easier climbs or declines in grade, with less of a toll on the bike’s battery.  That Hanebrink is designed to fit up to five Lithium Ion batteries at once, including one stock battery that will provide a 20-mile range of electric-only riding.

Dan Hanebrink’s company, Fortune Hanebrink, produces this hybrid electric bicycle for a starting cost of $5,500.  While this is a steep cost for a standard hobbyist, the Hanebrink Electric Bike remains an option for urban commuters, off-road enthusiasts and field researchers alike.  It has championship cycling and NASA engineering in its DNA, so it’s likely to fill any 2-wheeled need where gasoline is not an option. 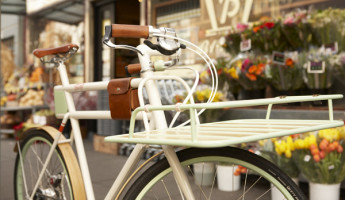 The Bicycle Revolution: Once and Future King of Transport