In the time it takes you to read this article, a jet powered by the Reaction Engines SABRE system could fly from NYC to Boston. That’s 214 miles in a flash — from a pair of aircraft concepts that could reach any destination in the world in just four hours. It promises to revolutionize air travel in the years ahead, and may even take passengers and cargo into outer space.

The Reaction Engines SABRE system is similar to most jet engines in how it produces thrust. The difference here is the SABRE’s ability to cool incoming air to previously unattainable levels. It uses a flash-cooling system that chills incoming air to -150 degrees Celsius, enough to keep engines running clean and cool at full throttle. This opens a new world of speed to commercial aircraft, where Mach 5 travel is sustainable for hours at a time.

The SABRE will first be used on two concept aircraft, the LAPCAT A2 for consumer transit and the SKYLON C1, a commercial space plane. The LAPCAT A2 by Reaction engines will be designed to travel up to Mach 5 between major airports around the world. It is said to be able to make the trip from Brussels to Sydney in 2-4 hours based on weather conditions. The SKYLON C1 is the all black bird seen below, an aircraft that will carry passengers and cargo to and from outer space while operated entirely from the ground.

To travel at speeds up to Mach 5, the Reaction Engines SABRE system will demand some design changes to its aircraft. Both the LAPCAT A2 and the SKYLON C1 are windowless, featuring elongated fuselages that can handle the wind resistance of supersonic travel. The lack of windows shouldn’t be an issue for the modern traveler, as new systems have been conceptualized that would replace windows with screens that wrap around the upper half of the cabin. We wrote about CPI’s windowless plane cabins back in October, and the Reaction Engines aircraft could be a great first application.

If this article took around 3 minutes of your time, the Reaction Engines LAPCAT A2 could have traveled from NYC to Boston in that time. Imagine that? It presents a great promise for the air travel of tomorrow, provided we’re not already preferring pneumatic tubes on the ground… 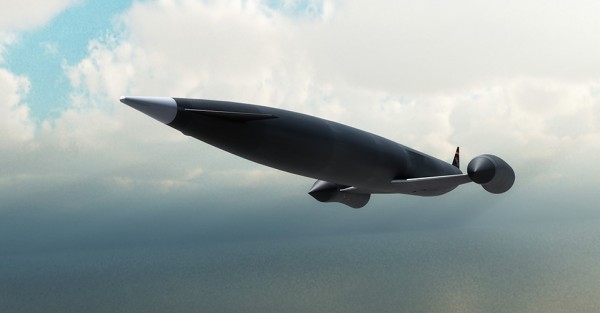