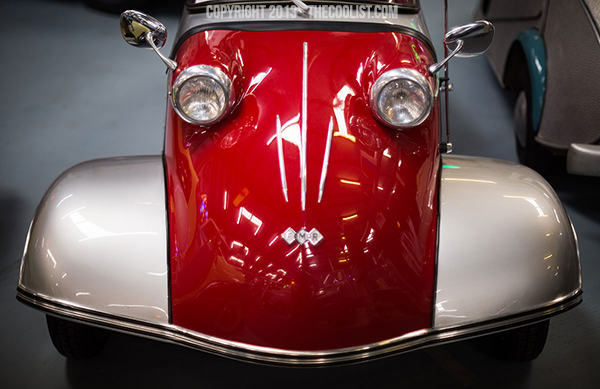 Decades before the new class of Mini Cooper, Smart Car and Fiat were in vogue, the microcar was a cult object amongst a progressive group of drivers in Europe.  This smaller-than-life vehicle was simple, economical and endlessly fun, a few points of interest which have come full circle today.  The original microcars of the 1950s and 60s have become revered classics, and the cult following of these tiny vehicles continues.  Recently, the largest collection of microcars in the world went under the gavel by RM Auctions, selling for princely amounts to eager collectors.  TheCoolist was there to explore this strange-world-of-small in person. 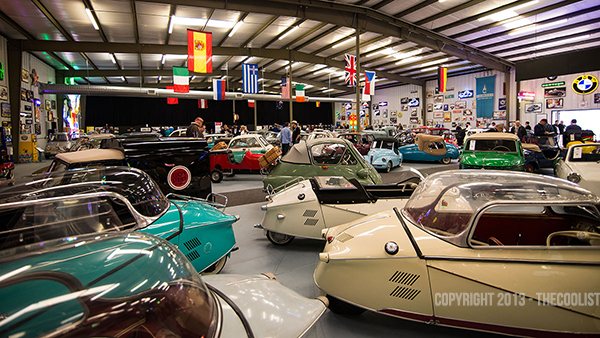 For lovers of the small and strange, it was hard to avoid the phrase “kid in a candy store” at this event.  Ironically, this collection of microcars is the pride of Bruce Weiner, an entrepreneur who made his millions with the Dubble Bubble candy company.  Having purchased his first microcar in the 1990s, Weiner ultimately assembled the largest collection of microcars in the world, over 200 in total.  This included single-seat three-wheelers, small-engine delivery trucks, four-person family cars and even a microcar with a camper trailer– most of which stood at hip level or lower. 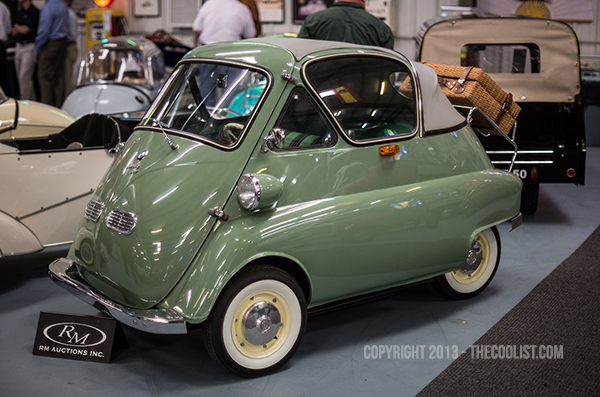 Two of the most common microcars in Weiner’s inventory were the BMW Isetta 300 and the Messerschmitt KR200.  The former is one of the most celebrated “bubble cars” ever made, an unusual-yet-appealing little car that appeared in many different forms at the auction.  There was the classic four-seater family car (above), an Isetta police car, a pickup truck and even a heavily-customized drag racer that Mr. Weiner himself commissioned (see: BMW Isetta “Whatta Drag”).  By comparison, the Messerschmitt KR200 (below) is a much more unusual microcar in its shape and seating layout.  This strange little vehicle has the appearance of a three-wheeled stingray with a glass dome cockpit, allowing two passengers to sit in a tandem configuration.  There appeared to be nearly a dozen Messerschmitts in Weiner’s collection, all of which seemed to garner a lot of attention from bidders and window shoppers alike. 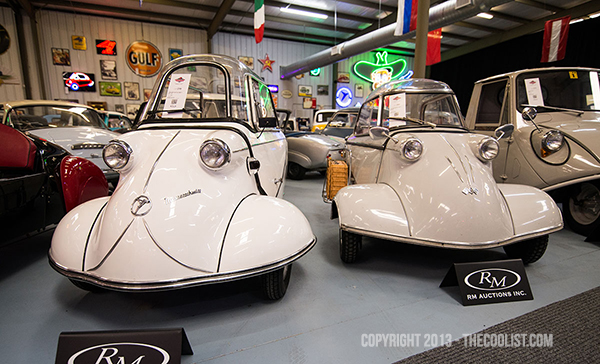 The microcars sold at the Bruce Weiner Microcar Museum auction ranged anywhere from $3,000 to over $100,000 based on rarity and condition.  Most of the well-preserved, working microcars were available between $20,000 and $45,000 in competitive bidding.  Several of the most desired vehicles, like the aforementioned “Whatta Drag”, the 1955 Fuji Cabin, the 1958 FMR Tiger, the Messerschmitt KR 201 Roadster and others were expected to fetch six figures during the event.  While these prices may seem high to the layman, these are surprisingly low sums for the one-of-a-kind vehicles included in this auction.  The auctioneers at RM Auctions has sold single vehicles in the seven figures at events like these, which puts the allure of microcar collecting in context. 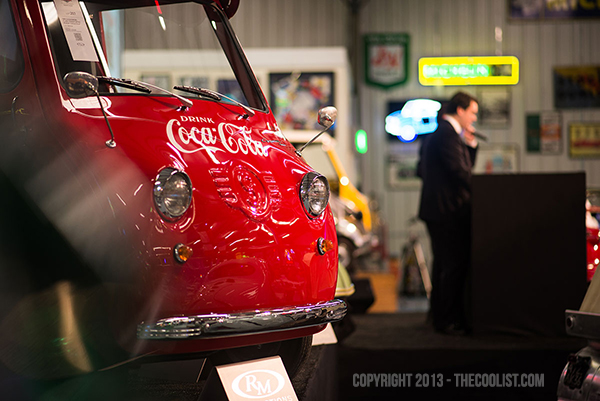 Beyond the 200 microcars sold at the Bruce Weiner Microcar Museum auction this weekend, a large collection of related memorabilia was available.  Everything from microcar toys to signage was included in this auction, making for a staggering event from a single seller.  It was the largest collection of microcars in the entire world, a once-in-a-lifetime event that may never be matched again.  While an interest in microcars has risen again thanks to some exciting small cars by Fiat, Mini and others, these classics will be remembered as the starting point of the world’s history of driving small. 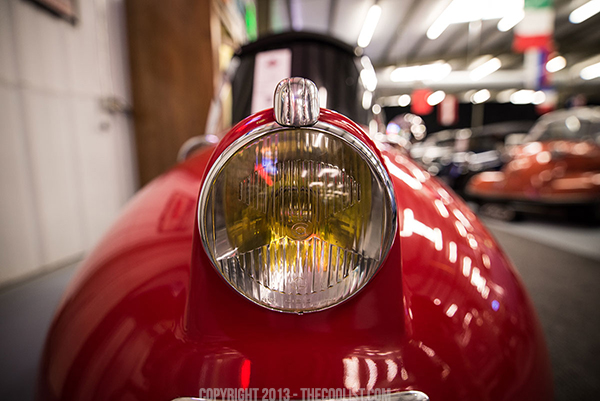 A sample of the amazing scenes we saw at the microcar auction are available below.  To see a full-resolution view of the event, visit our in-depth gallery on TheCoolist’s facebook page. 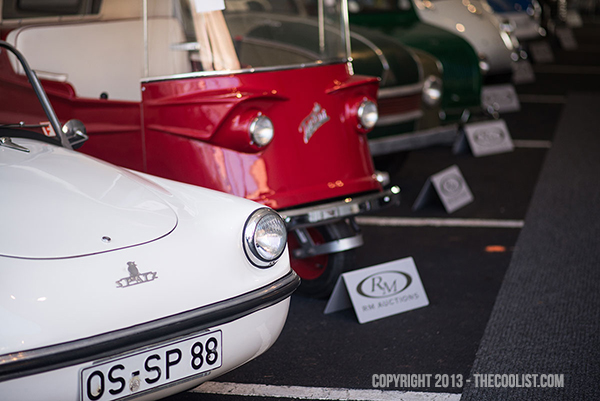 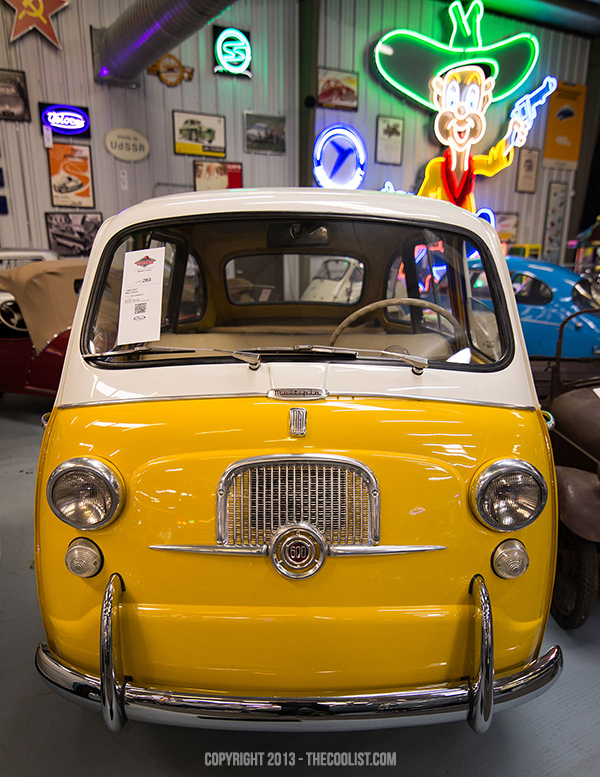 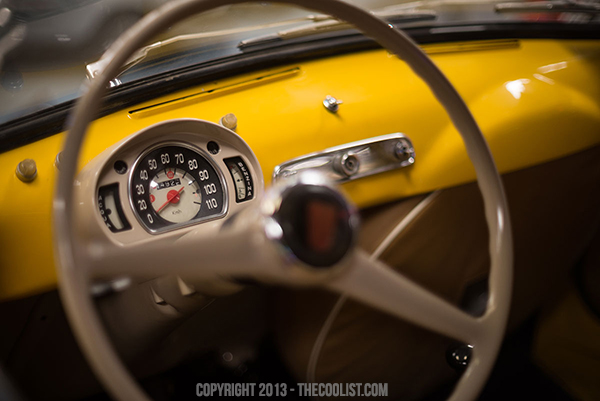 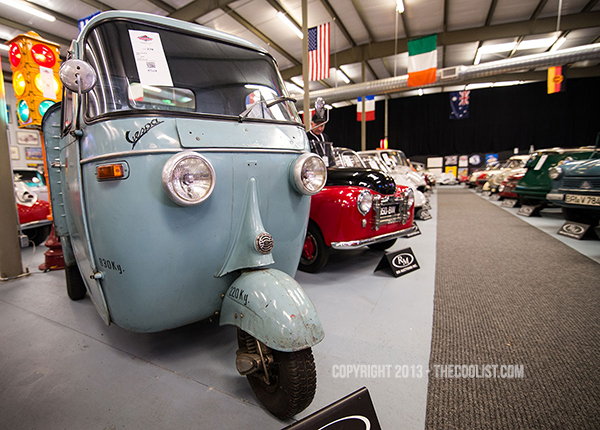 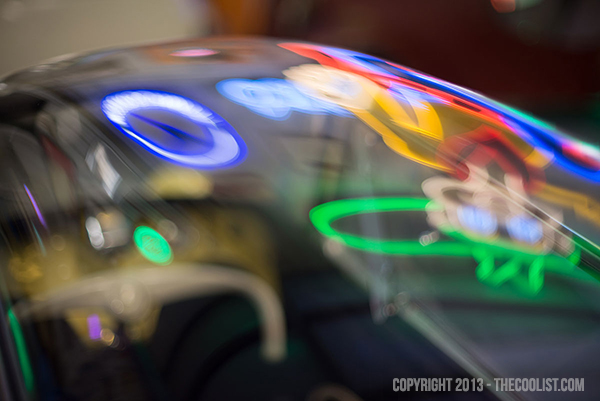 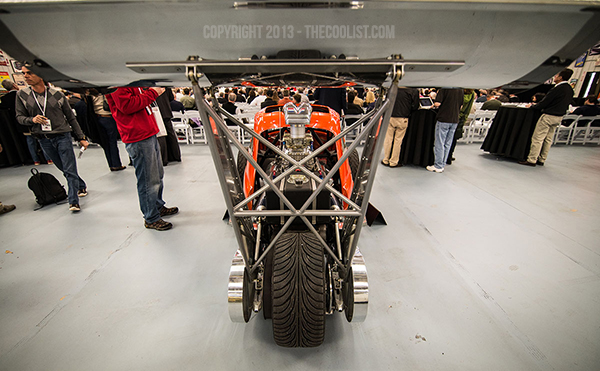 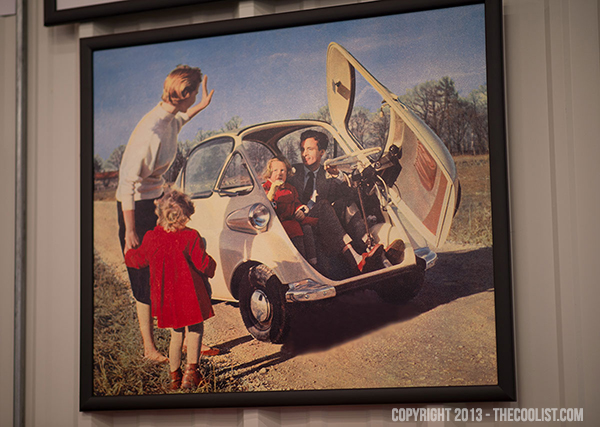 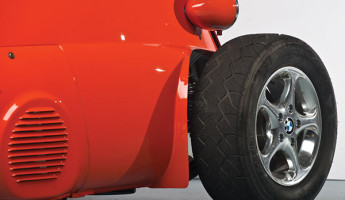 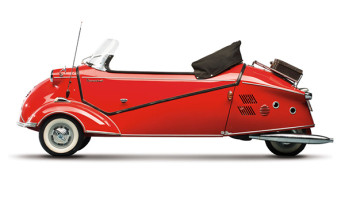