The Daily Skimm Review: A Friendly Newsletter for Busy Women 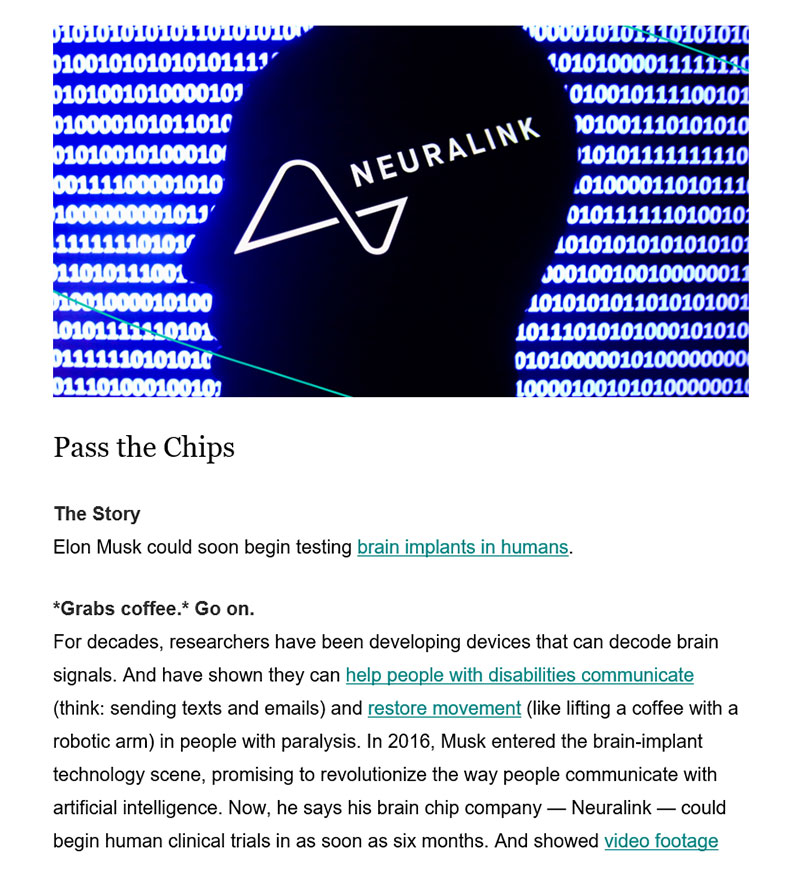 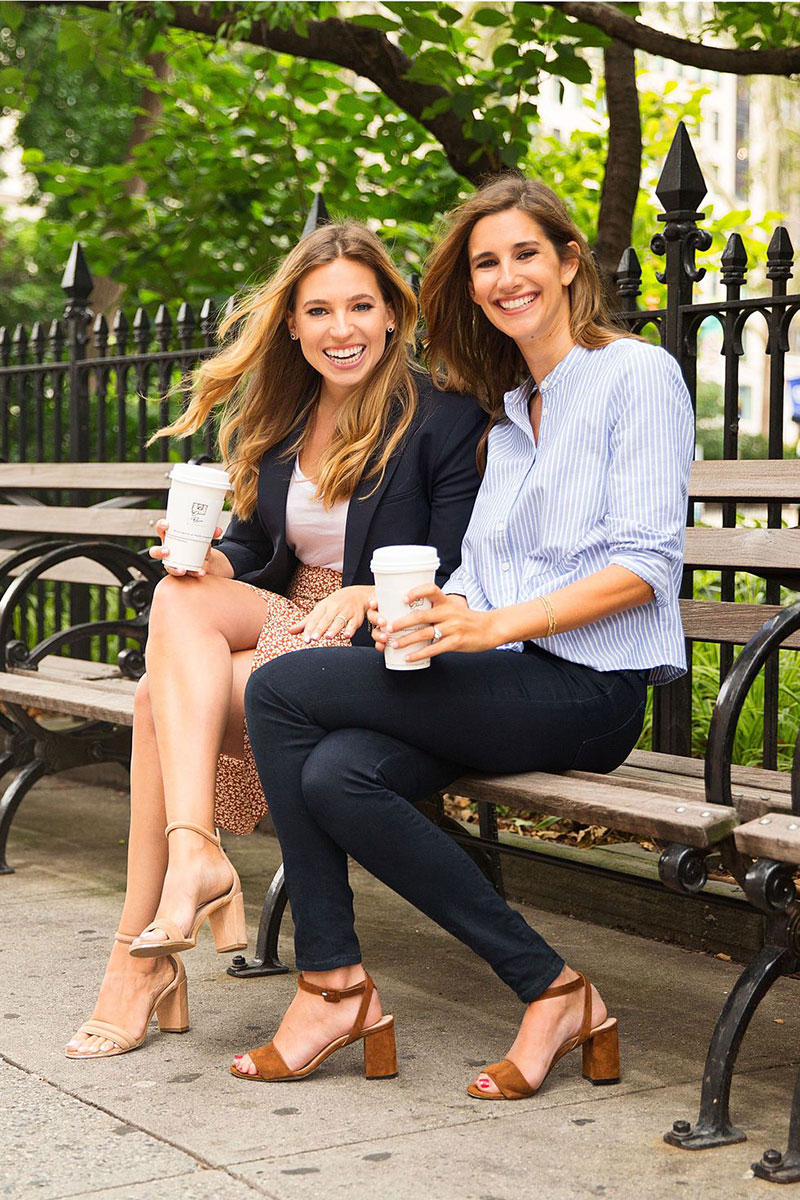 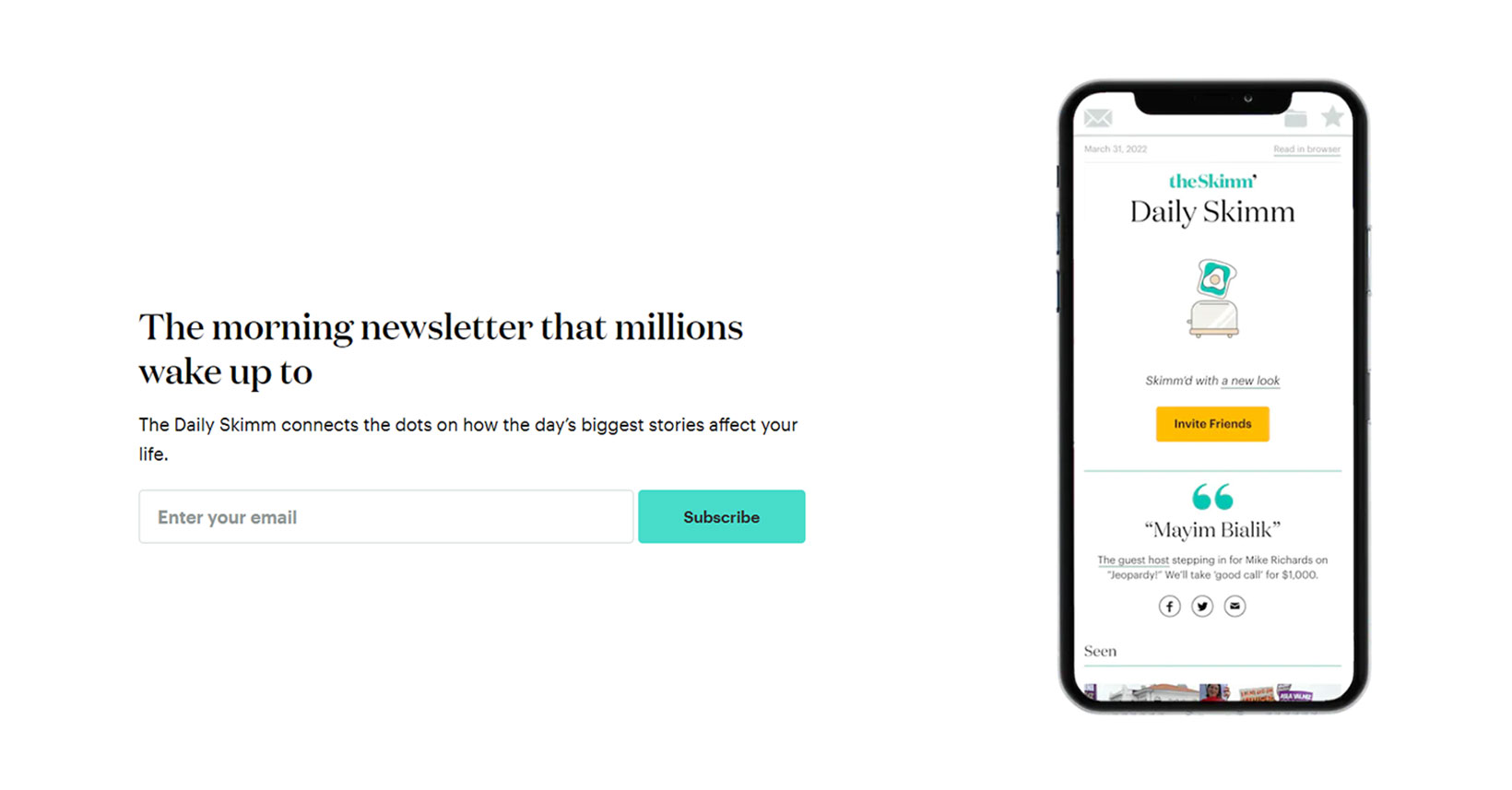 The Daily Skimm is a casual newsletter for professional women who want a non-pretentious breakdown of major stories. Our review tackles the effectiveness and appeal of theSkimm’s friendly tone and laid-back, skimmable format.

We followed theSkimm for over a week and found it conversational, cheeky, and simple to ingest. Cofounders Carly Zakin and Danielle Weisberg created the Daily Skimm to be the reader’s friend rather than a staunch authority on the news. The tone, style, and structure appeal to millennial women, but theSkimm is suitable for anyone who doesn’t mind occasionally left-leaning content. The newsletter introduces subjects, offers a slightly humorous breakdown, and links out to external sources if the reader wants more.

Below, we’ll dive deeper into theSkimm’s newsletter and our impressions of its digestible news delivery.

An overview of the Daily Skimm

An overview of the Daily Skimm presents a relaxed middle ground between observing and ingesting the news. TheSkimm’s primary goal is to deliver easily communicable topics impacting and concerning millennial women. TheSkimm’s second goal is to be your friend. The newsletter isn’t the first to prioritize camaraderie, but theSkimm’s attractiveness lies in its reliability and laid-backness.

TheSkimm positions itself as a nonpartisan news source, but it skews left according to Ad Fontes Media. At no point during the daily dispatch do the authors overextend into opinion or speculation, however. TheSkimm’s reporting is factual and favorably lacking in the cool neutrality of nonpartisan news. Tone and delivery play a major role in the digestion of any information. What we give up for impartiality leads to impersonality, which is its own caveat for independent news sources. Readers want to know there’s someone on the other side of the screen—but they don’t want to be preached to either. TheSkimm’s solution is to extend a personality and it’s not for everybody.

TheSkimm’s lax delivery of its main stories (called “skimms”) leaves little to debate, except a bad pun and perhaps a laugh. The newsletter tone is firmly casual, even while summarizing serious events. TheSkimm does away with informational headers and cold statistics in exchange for quips seemingly ripped straight out of a group chat. The appropriateness or tastelessness of theSkimm’s conversational tone will vary from topic to topic. However, theSkimm is neither trying to make a statement nor clickbait you with its verbiage.

The Daily Skimm is a chat around the water cooler condensed into a newsletter. In exchange for the office talk, the newsletter provides you with five or six short sentences of a breaking story your busy friend group hasn’t talked about. Every event is effectively distilled as casual conversation. The writers intelligently link out to external sources if you want further reading, and the product recommendations are buried at the bottom of the page.

What is the Daily Skimm?

The Daily Skimm is a newsletter created by Carly Zakin and Danielle Weisberg. Zakin and Weisberg initially met on an overseas program before reuniting at NBC News. Zakin and Weisberg left their position as NBC producers to start up theSkimm in 2012. TheSkimm now boasts over 7 million subscribers, composing newsletters like the Daily Skimm, several podcasts, a mobile app, and the New York Times Best Seller, How to Skimm Your Life.

TheSkimm’s team has expanded since its inception, but Zakin and Weisberg’s prerogative remains the same—to create news that fits into the daily lives and social groups of twenty- or thirty-something women. Zakin and Weisberg are industrious millennials themselves. By focusing on a newsletter that echoes their own experience, Zakin and Weisberg tapped into an audience that went under-appreciated in 2012.

Outside of their audience, Zakin and Weisberg unknowingly stumbled upon something else in 2012 that many news sources lack. TheSkimm is accessible. Any age group, gender, or political association can skim the Daily Skimm and gain the vital details of one or more major stories.

It’s true that Zakin and Weisberg’s casual narrative lacks nuance and is occasionally left-leaning. However, the cofounders’ preference for digestible snippets thwarts informational overload or hyper-moralization. The newsletter comfortably introduces you to topics regardless of your politics of identity, and offers deeper dives for those who have time.

Who is theSkimm for?

TheSkimm is primarily for busy millennial women on the go. The newsletter’s readership has limited time to catch up with major events, but they don’t want to be out of the loop either. Cofounders Weisberg and Zakin revealed during a 2015 Q&A that they found their solution by prioritizing the routine of urban millennial women.

“It’s a professional audience,” Weisberg said. “[We] looked at what they do first thing in the morning. Your alarm goes off, you grab your phone, and you read emails from friends and family first.”

TheSkimm’s casual format and friendly tone are appropriate for an early morning read. Whereas older generations simply turn on the news, younger generations seek quick and personalized information via email.

Choosing to communicate via email newsletter was ideal for theSkimm’s millennial readership for two reasons. Firstly, email newsletters complements the routines of millions of women. Close to 93% of US women use email, offering extensive outreach. Secondly, email enables neutrality. The anecdotal, biased nature of social media is tiring for women who want factual news. Newsletters like theSkimm offer a worthwhile reprieve before readers start their day, delivering a digestible format that is conversational at best and slightly left-leaning at worst.

What makes the Daily Skimm different?

An easy-to-read format makes the Daily Skimm different from other newsletters. The conciseness of the newsletter’s text is obvious at first glance, but the factors listed below are what make theSkimm’s delivery so effective.

Creates a tone that resonates with their audience

TheSkimm’s tone resonates because it’s “written as if it’s from a friend” according to cofounder Carly Zakin.

“We’ve been able to stand out and be in the top of people’s inbox because people feel like TheSkimm is a friend, and feel like that voice speaks to them.”

We found that Zakin’s words ring true. TheSkimm is news delivered by and for a busy but no-less-informed close friend. We previously compared the newsletter to a chat around the water cooler, but real-life conversations are often biased, misinformed, and lengthy. TheSkimm’s tone is effective because it appears casual and cheeky but in actuality prepares readers for conversations that fit into the large perspective.

The Daily Skimm’s pop culture grabs and lackluster puns aren’t always appropriate, but they aren’t trying to overwhelm, shock, or moralize you either. TheSkimm’s friendly voice discards formality so readers have a starting point for more nuanced topics.

TheSkimm provides factual reporting even right-leaning readers can appreciate. TheSkimm’s authors skew left, but it ranks highly in reliability on Ad Fontes Media’s Media Bias Chart. Furthermore, the newsletter authors link out to their sources intelligently and plentifully. By linking out, theSkimm provides both reliable and skimmable content that doesn’t eliminate nuance.

Readers across the political spectrum should be wary of humor because it can be a vehicle for false reporting. However, the Daily Skimm employs humor strategically in an effort to keep things honest. Humor is evident in tech or pop culture stories, and barred from more serious topics like death or war. TheSkimm also publishes articles of its own that mirror the same fact-based practices as the daily newsletter.

Connects readers to a larger narrative

The Daily Skimm condenses information and connects readers to a larger narrative through the use of citations. Linking your sources is a fundamental practice in online journalism, but theSkimm does itself credit by pointing to more descriptive knowledge for further reading. The newsletter’s conciseness would be a bigger point of concern if theSkimm claimed to be your end-all-be-all source of news—but it doesn’t. TheSkimm effectively summarizes, links out to credible publications (e.g. Reuters and NPR News), and sends you on your way.

How does the Daily Skimm deliver the news?

The Daily Skimm delivers the news through an email dispatch that runs Monday through Friday. TheSkimm additionally added a Saturday newsletter called the Daily Skimm: Weekend in April 2023.

The Daily Skimm’s skimms utilize a simple format. The newsletter opens with a quote that links out a larger story. After which, Skimm breaks down one major story into easy-to-read sections titled What’s Going On, What’s the Response, or similar. Additionally, the newsletter will include theSkimm, a three or four-sentence long summary of its top story for readers who want the bare minimum with the most information. There may also be a bullet list summarizing important figures or events related to the story.

The rest of the newsletter follows a similar structure. Scrolling down reveals three to four sections summarizing various topics, such as tech, sports, conflict, and more. theSkimm prefers to link out to external sources, so it uses witty headers to grab the readers’ attention in place of clickbait. For example, “Guess Who’s Back, Back Again” headlines the textual nugget “Brazil’s new-ish president has everyone talking.” Meanwhile, “Who’s stepping out?” refers to Anthony Fauci, Chief Medical Advisor to President Biden retiring after decades of service. theSkimm makes these pairings in a pithy but not self-indulgently witty way to keep eyes on the page.

True to its goal of condensing the news, the Daily Skimm’s selection of stories intentionally narrows as you scroll further. The rest of the page showcases advertisements, promo codes, recipes, and other offers that don’t water down the rest of the content.

The newsletter closes with a round of birthdays and honorable mentions among theSkimm’s community. For example, one issue mentioned a reader who was dog fostering and linked out to the organization they were fostering through. Acknowledging theSkimm community and including birthdays reminds readers that the writers behind the screen are human—further cementing theSkimm’s position as a casual and friendly news source and one of the best newsletters out there.

Final thoughts on the Daily Skimm

TheSkimm’s simple, skimmable news fits appropriately into a busy woman’s routine. We recommended theSkimm primarily for readers who want to learn more but don’t know where to start. The newsletter strives to be a friendly, non-offensive voice that fits into a larger narrative of news. Skimm writers definitely skew left, but they deliver factual, reputable reporting both sides of the political spectrum will appreciate. Concise text, ample use of external links, and generally accessible content are what make theSkimm different. Although the Daily Skimm’s use of humor isn’t for everybody, the newsletter is a suitable starting point for learning and discovering major stories.