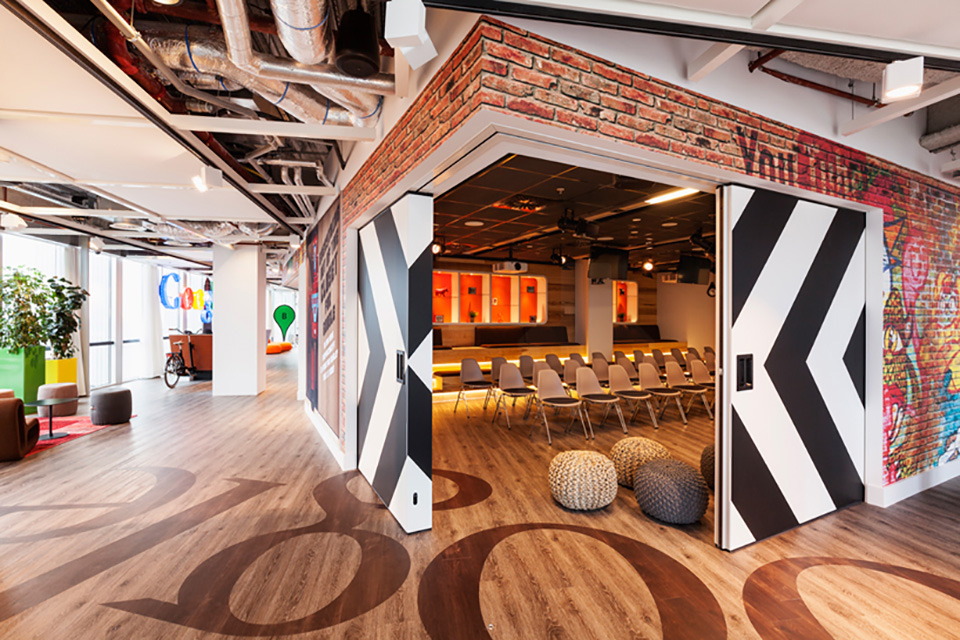 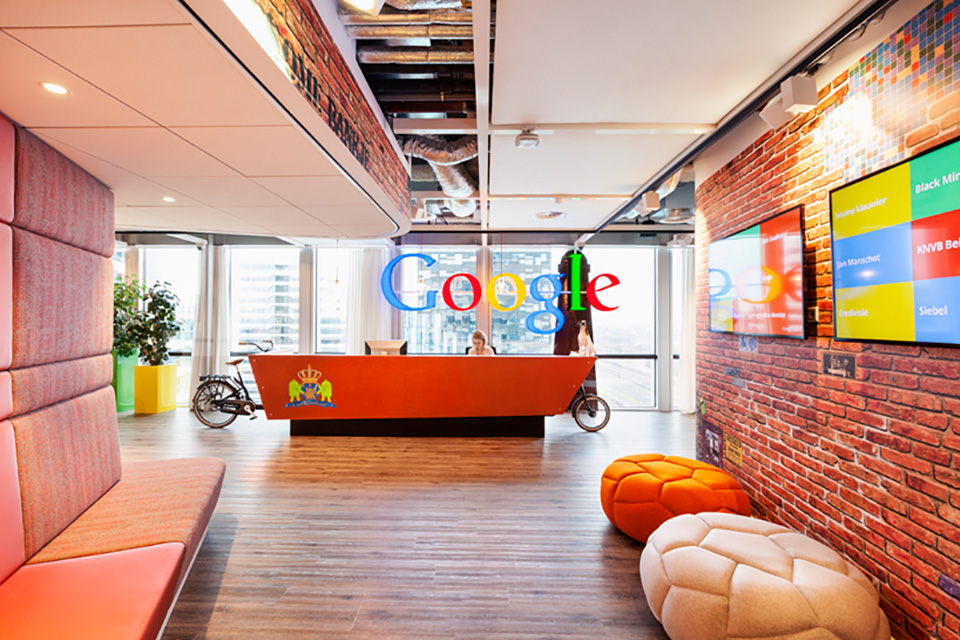 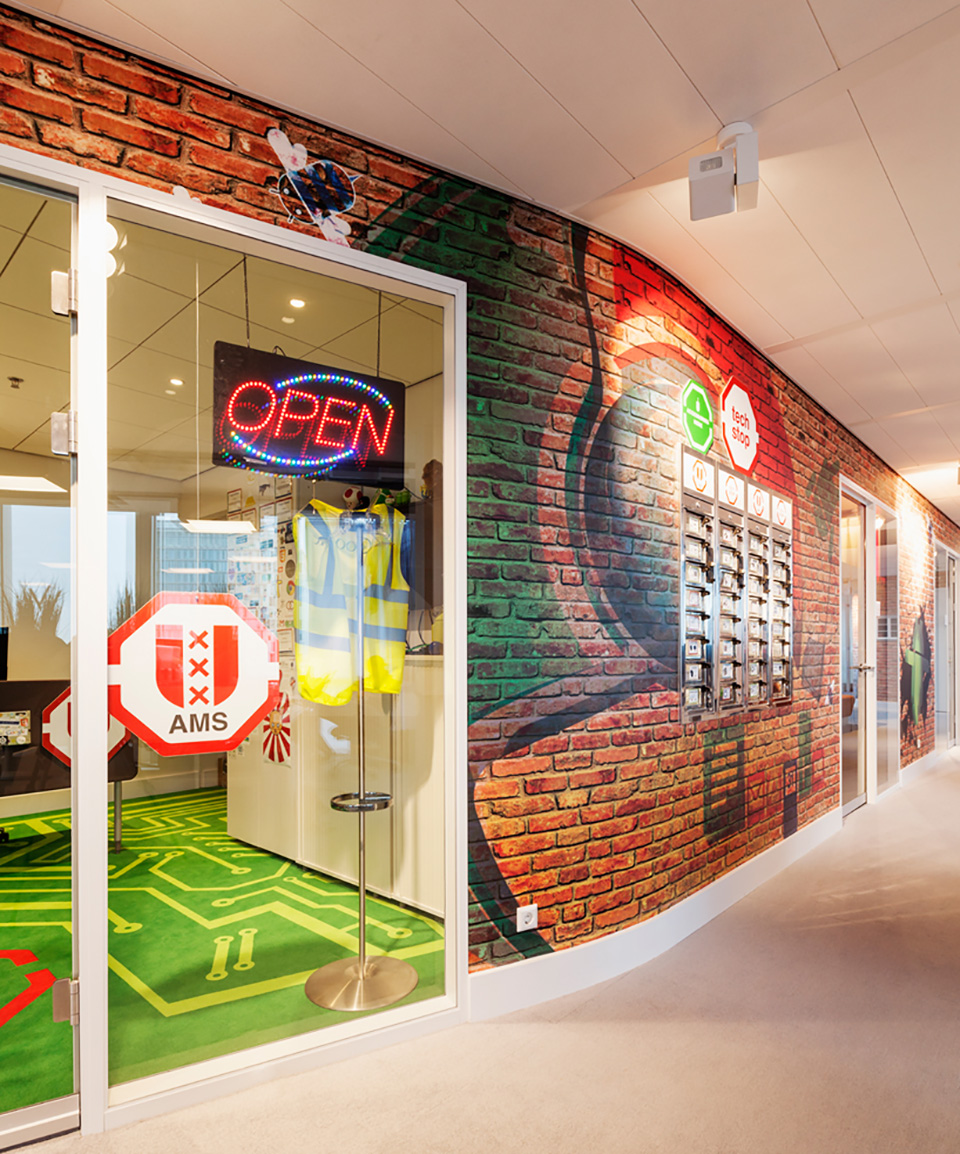 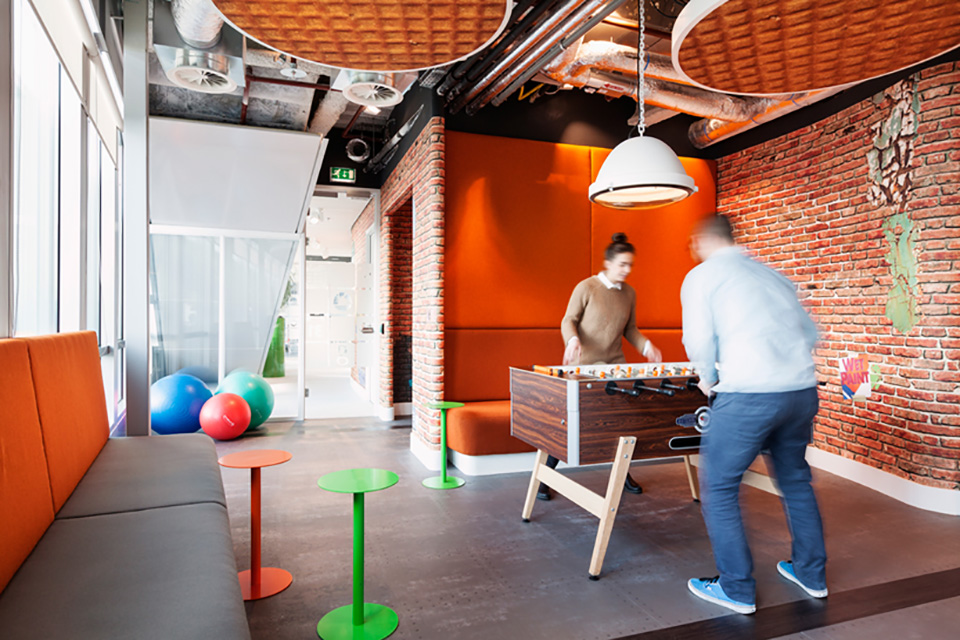 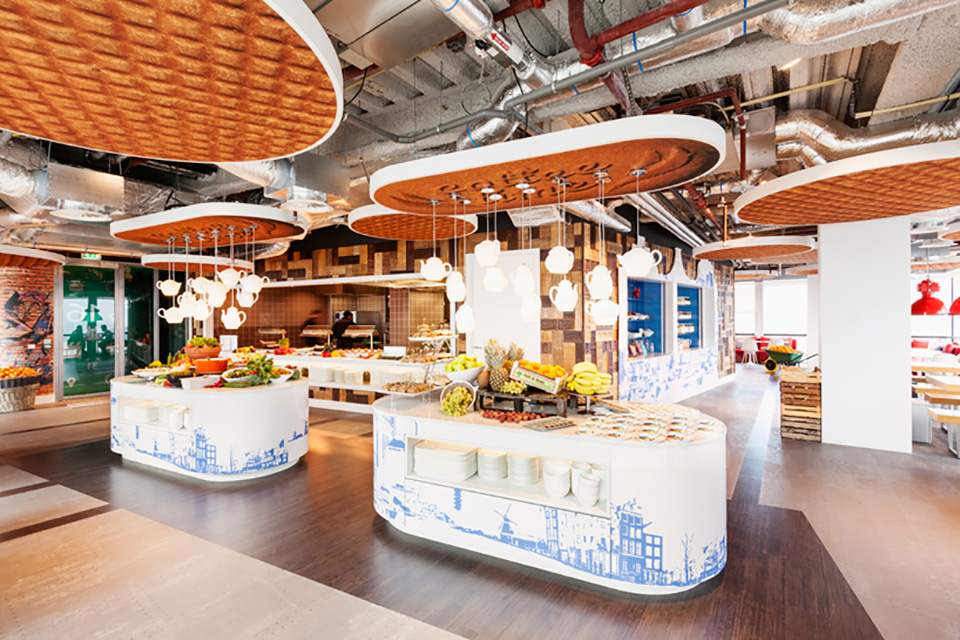 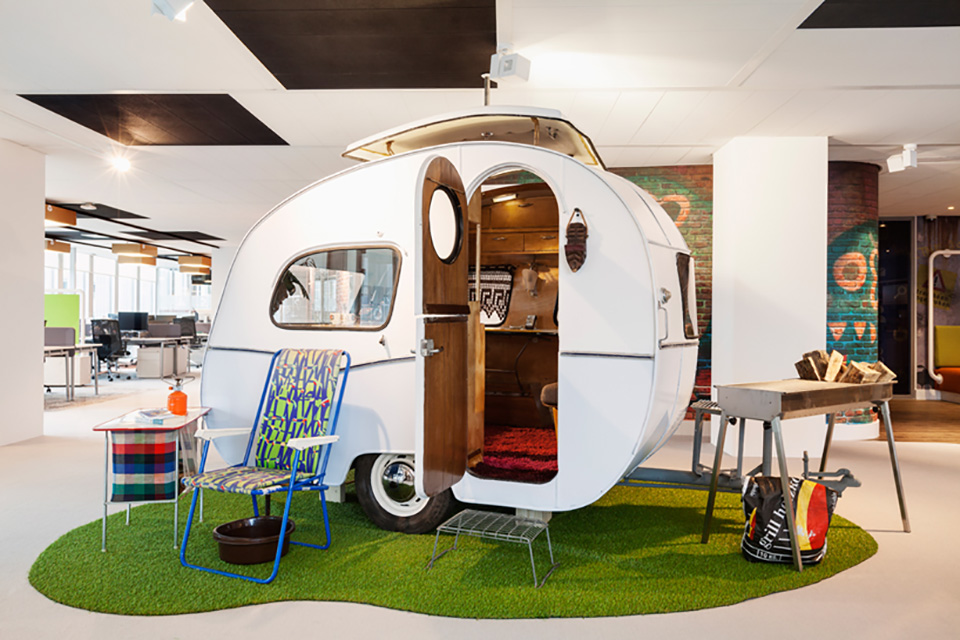 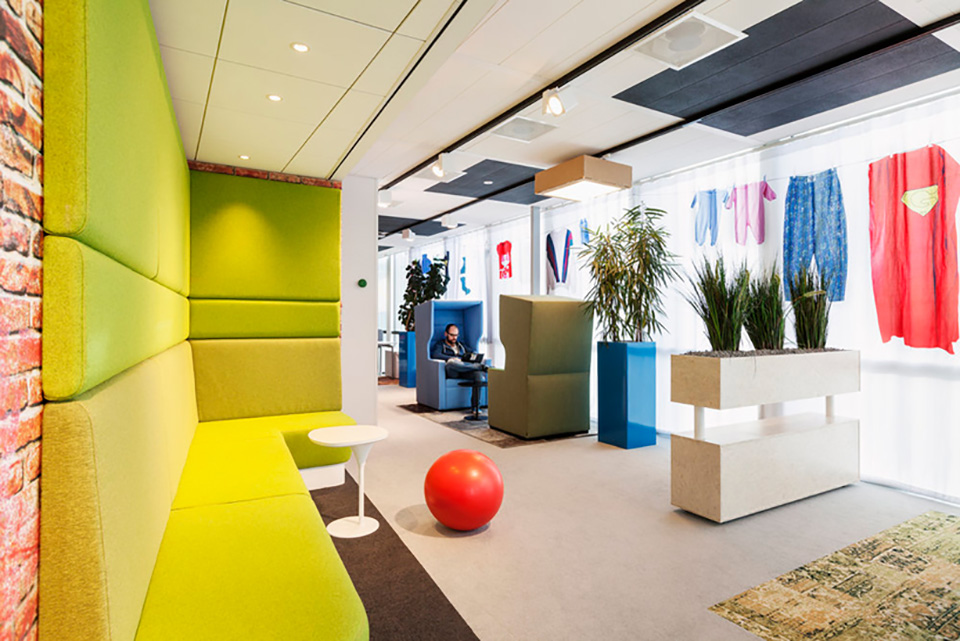 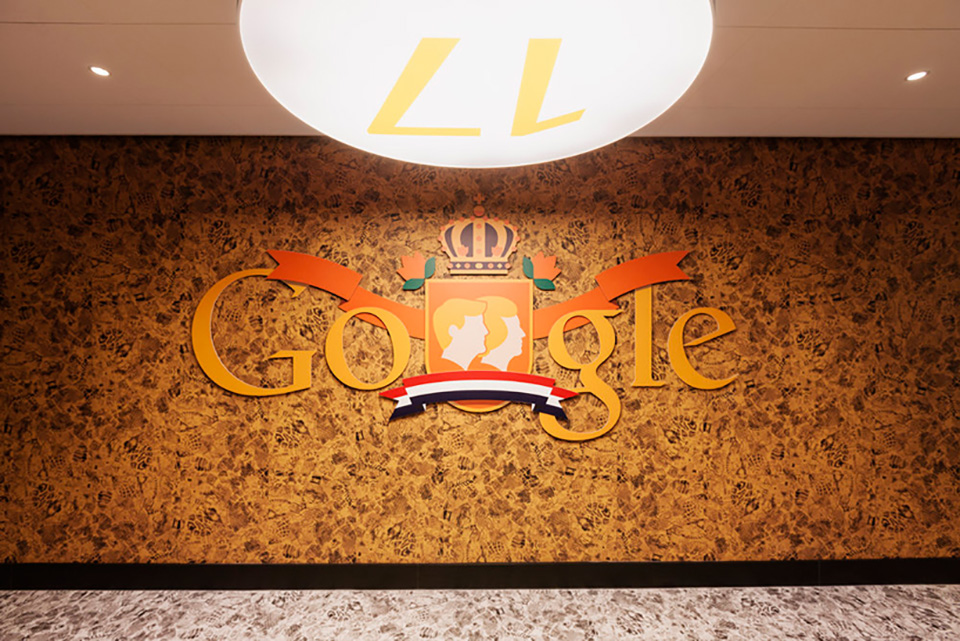 Thanks to Dutch interior design studio D/DOCK, Google’s Amsterdam office has received something of an awesome makeover. See, the firm thought it might be a smashing idea to take the company back to its roots, so it’s based the building’s aesthetics off the garage where founders Larry Page and Sergey Brin first conceived of the corporation. The office features a bunch of different cool and quirky design features, including graffiti walls, cardboard box lights and a container wall in the 70-seater auditorium. There’s even a bicycle carrier in the reception area.

The structure is located in the southern part of the city, and spans a total of three thousand square meters over multiple floors. Each floor features its own ‘cave,’ with huddle rooms, meeting areas, micro kitchens and video booths at the building’s core. Each work area is further themed after an individual ‘neighborhood;’ these work areas are further designed to give employees a 180 degree view of the city while they’re at their desks. Of course, Google’s swanky new Amsterdam offices don’t simply look like an urban artists dream come true – they’re also thoroughly sustainable. 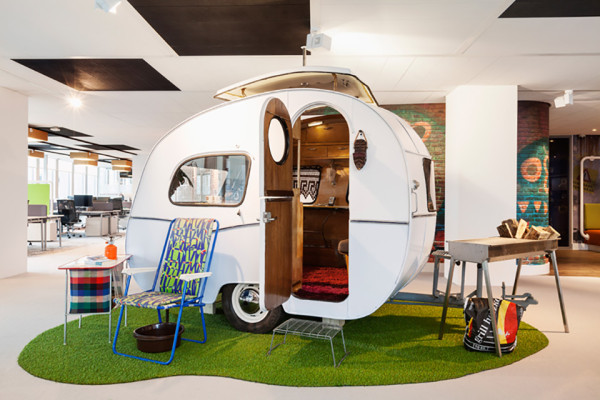 D/DOCK used only non-toxic materials for the project, with many major design elements focusing on reduced water and energy consumption. Most of the furniture in the building is actually re-purposed from other locations, and the re-used febo snack wall has been transformed from a cafeteria to a distribution point for computer accessories. 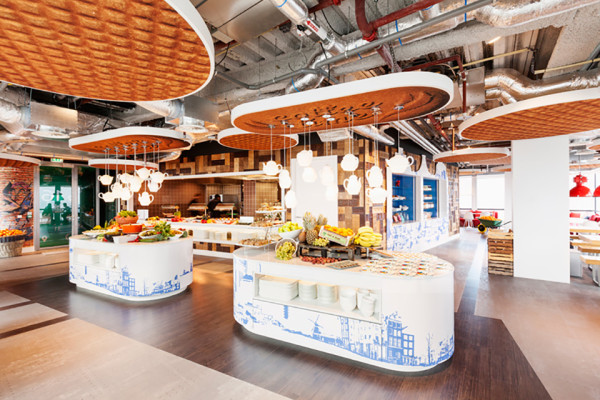 D/DOCK has tossed a bit of Dutch pride into their designs, too. In order to give the atmosphere a more local feel, there’s a carrier cycle at the reception desk, the texture of the Dutch dessert “Stroopwafel” has been applied to the ceiling panels, the restaurant is decked out in gingerbread wall covering and blue graphics, and real sixties caravans sit in the middle of the office to serve as private meeting rooms. As a whole, it looks like a relaxing, downright awesome place to work – which was probably the point all along.

After all, no one likes working in a stuffy, boring office, right?

“It is a place that makes the employee perform better by offering a work environment that meets their needs,” explained D/DOCK partner Coen Van Dijck. “Happiness, comfort, flexibility, relaxation, well balanced nutrition, exercise, daylight, freshair and visual stimulation are some of the fundamentals that make this office a healthy one.” 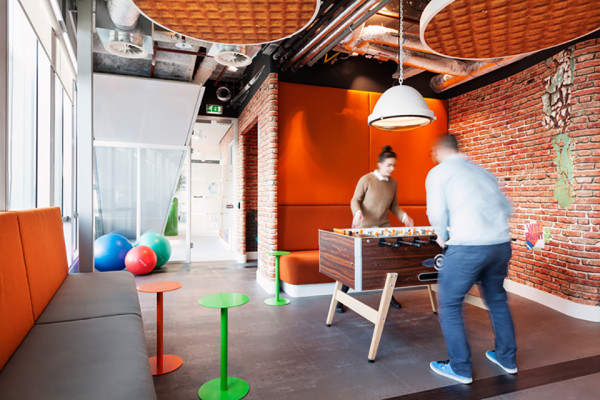