of 12
Mom holds a young photo of herself to her face
Mom gazes into a hand held mirror
Mom finds herself in a book
Mom has dinner with her shadow
Tony paints Mom
Mom pops out of a wall portrait
Mom holds a light bulb in her mouth
Mom wears a lamp shade on her head
Mom crawls through a painting
Mom caresses her own face from the pages of a book
Mom tunnels through a wall
Mom looks through binoculars
Artist Tony Luciani and His Elderly Mother Explore Memory, Aging, and Playfulness Through Photography
Buy Now 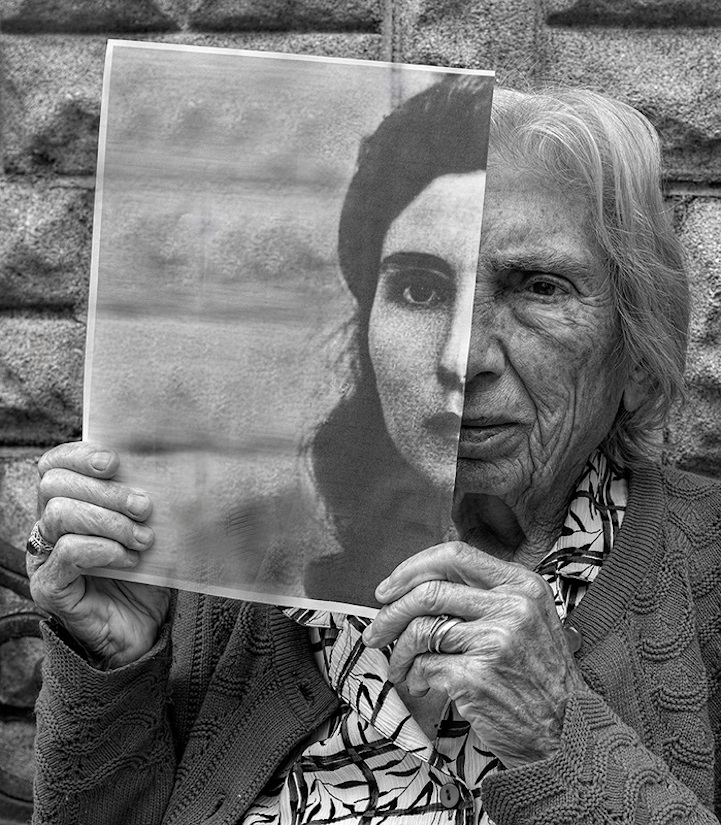 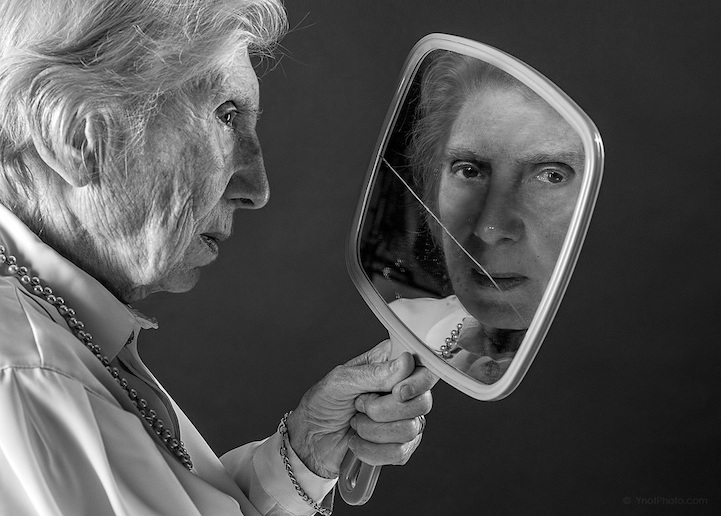 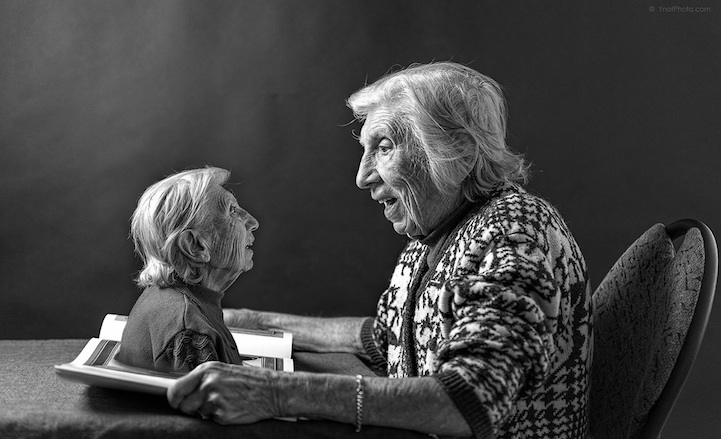 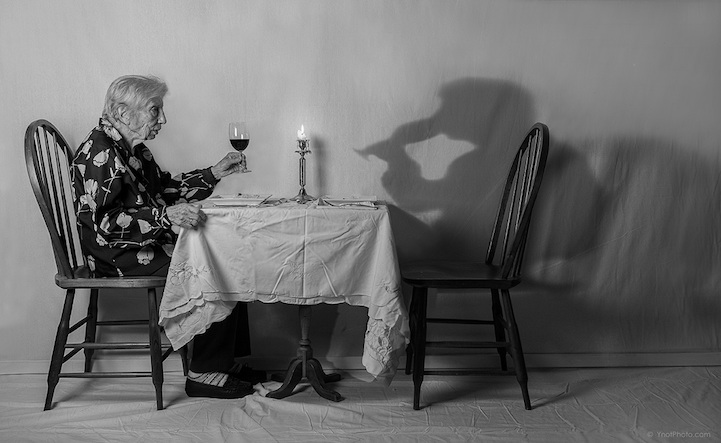 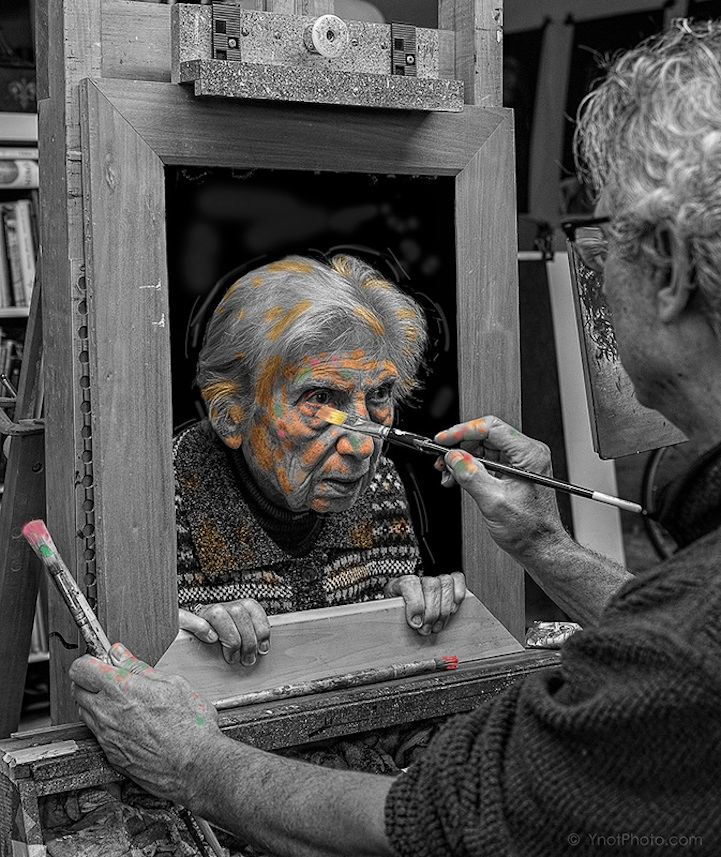 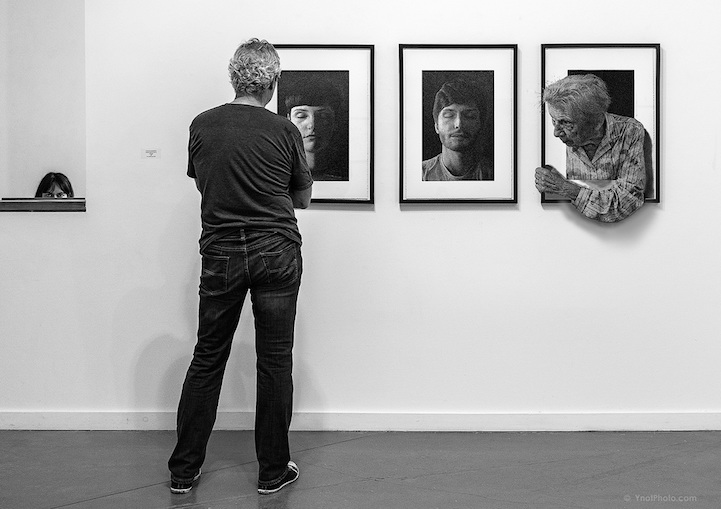 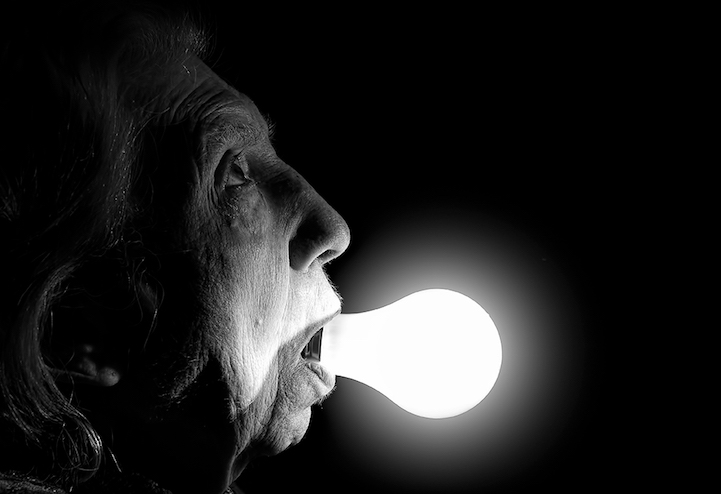 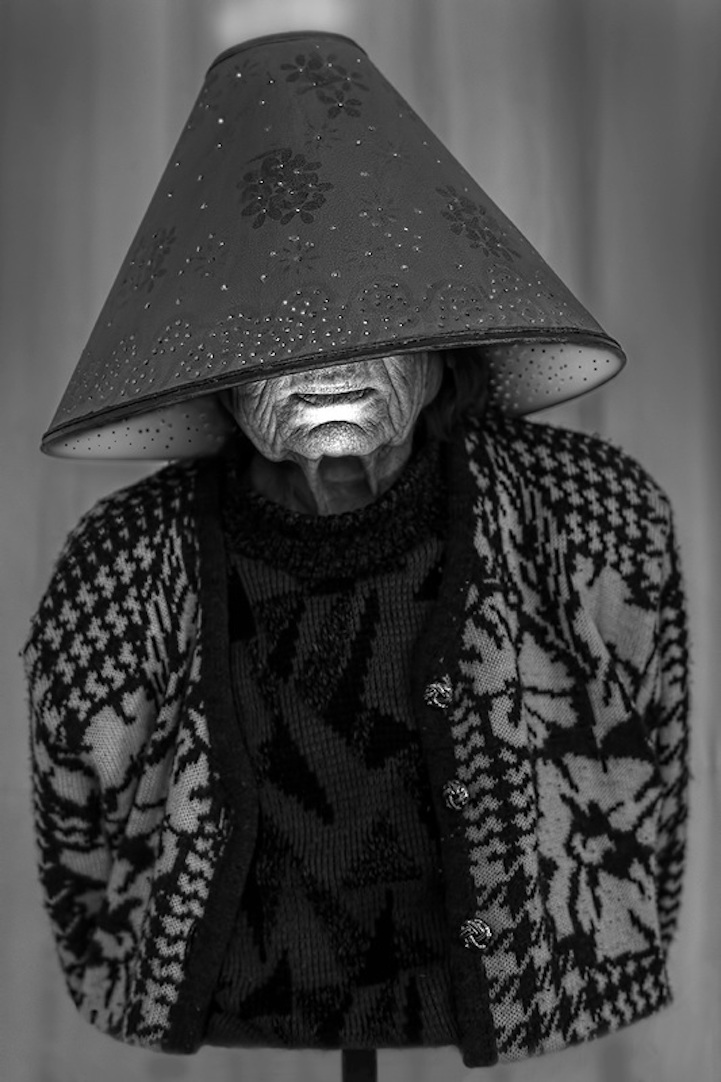 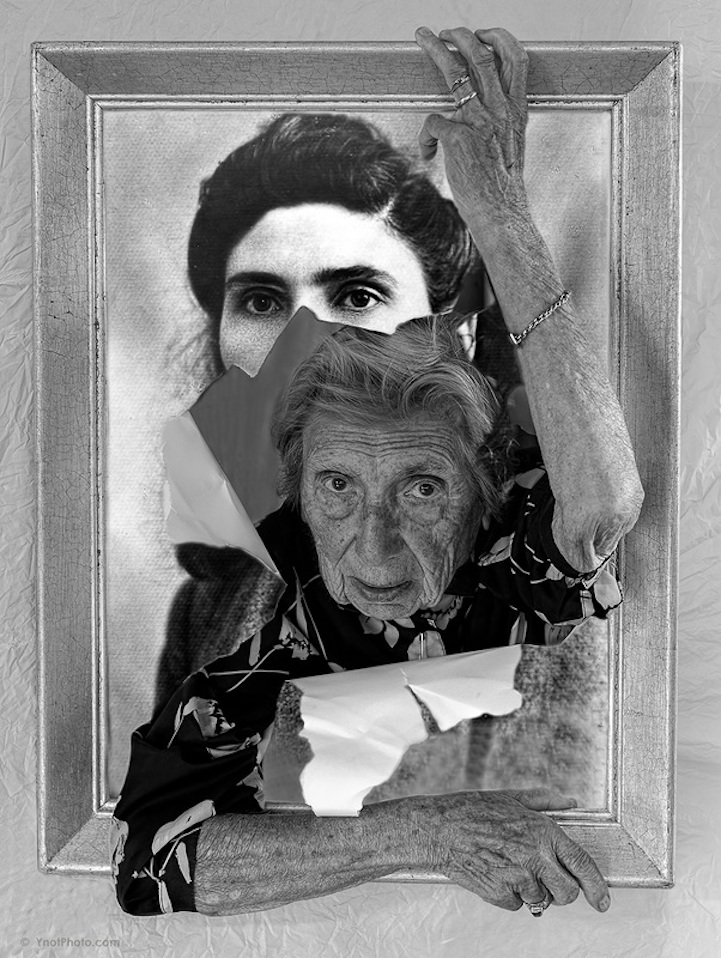 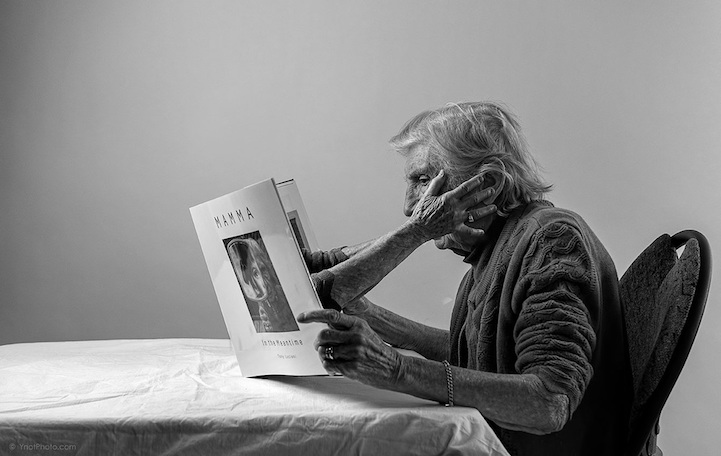 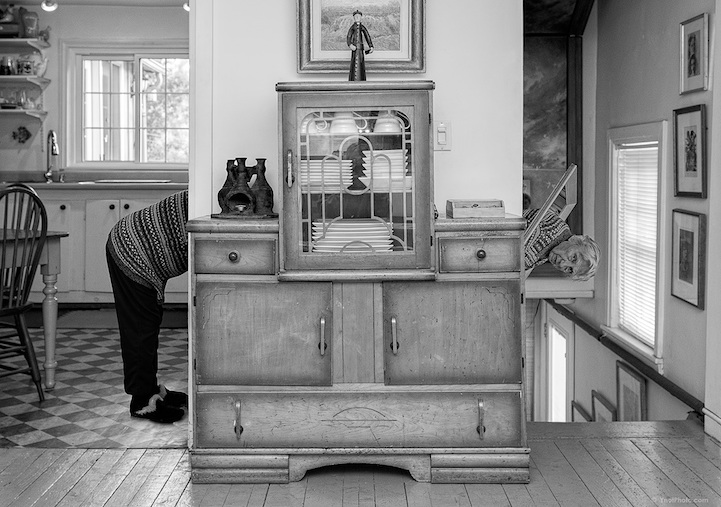 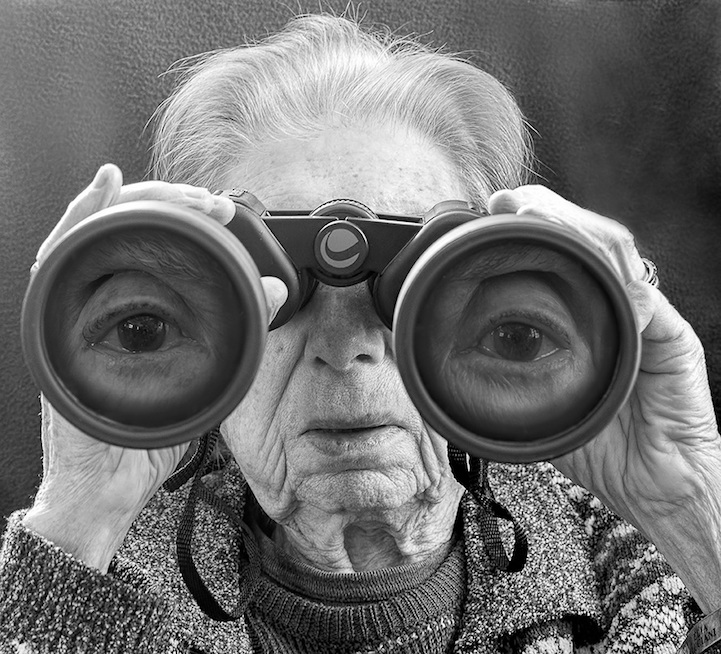 Dealing with aging and significant memory at once is a difficult experience for any individual, as well as their supporting family members, but it’s one than many if us will experience in one way or another. Artist Tony Luciani faced this emotional reality when his mother, aged 91 at the time, suffered a hip injury. Luciani brought her to live with him and, as she recovered, they worked together on coming to grips with not just her ailing physical condition, but also her onset of memory loss and dementia.

Instead of admitting defeat and succumbing to a boring routine, however, Luciani and his mother decided to seek solace and empowerment through a brand new creative element: photography. Around the same time that his mother came to live with him, Luciani had bought his first camera and was looking for inspiration for his first shot at photography. He found that in the way his mother’s playful spirit and attitude prevailed through her age-based challenges.

Luciani began asking his mother to recreate scenes from books or act our images from pictures and paintings. This achieved several things for both of them. Firstly, it let them loosen up, be silly, and have some fun together. It also let Luciani start practicing with his new camera as he snapped photos of his mom striking poses, while simultaneously experimenting with editing and Photoshopping techniques.

The Strange Ones, That’s How Luciani Named His Photography Collection

The funny photographs turned into something bigger, however, when Luciani began to realize the sense of happiness and fulfillment his mother got from participating in his photography. She began to have new ideas for funny poses and that inspired him to create new, rather unique photoshoot concepts for her. Luciani began working with his mother to photograph her doing funny or strange thins that typical old ladies wouldn’t normally be seen doing, like crawling out of a painting or pretending to be a house lamp.

As they worked, however, Luciani’s mother began recalling memories in a way that she wasn’t always able to do daily. He let the focus of the photos shift occasionally to recollecting her history, creating beautifully meaningful images of his mother gazing at younger versions of herself or sharing a meal and a glass of wine with her own shadow.

Eventually, Luciani decided to compile a series of his mother’s photos into a collection entitled The Strange Ones. He intended the series to portray his mother in a playful, albeit slightly odd, manner in order to explore the relationship between aging and identity. Although the two have worked on a number of other photo collections together since, this particular series calls to attention how inspiring it can be when we value our loved ones through their struggles and listen to their unique stories, experiences, memories, and desires at every opportunity.

If you’d like to see more of Tony Luciani’s work, including more work featuring his mother, take a look at his photography website. (All images © Tony Luciani)