The Architecture of the Auto Show: 2014 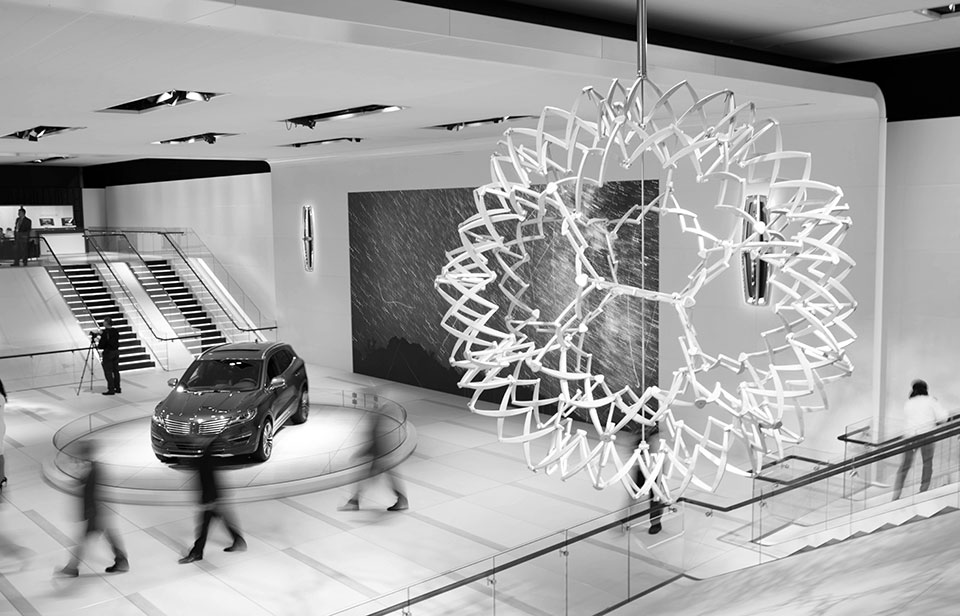 The Architecture of the Auto Show: 2014 – Behind the dream cars and the spokesmodels, there is more beauty to be seen at the North American International Auto Show.  Each year, the automotive brands spend time, effort and money to design grand stages upon which their new vehicles will be revealed.  Some are humble and restrained, others are monumental in design, but all of them have a deep allure to the photographer in me.  When I’m not managing TheCoolist or writing articles for this site, I work as a commercial food and architecture photographer.  It was hard to turn that part of my brain off when exploring the 2014 North American International Auto Show.  I saw marvels of architecture in Detroit, and I saw them behind what everyone came to Detroit to see.  Here’s a bit of my visual experience in Detroit, the architecture of the auto show.

Words and images by Michael Payne for TheCoolist.com 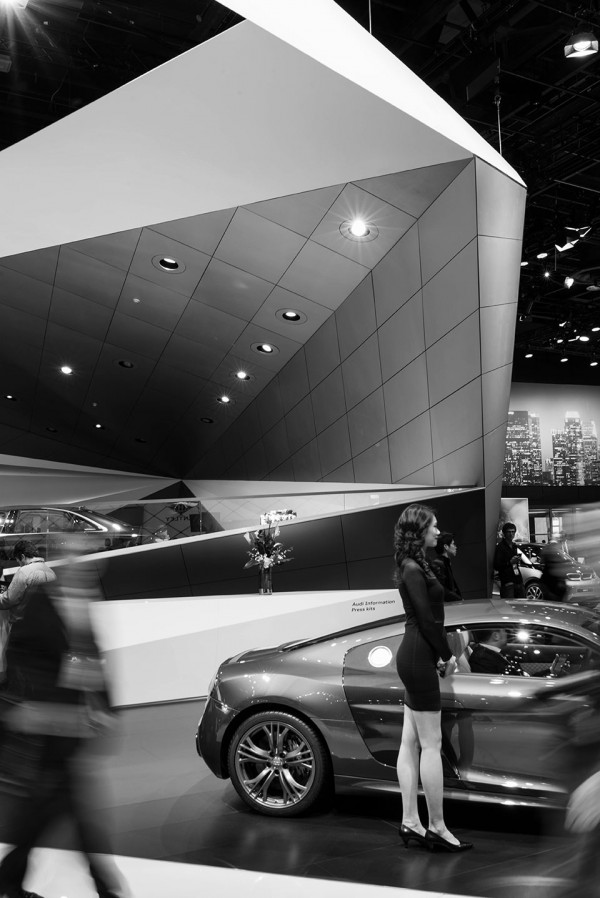 The architecture of the auto show must be understood in the context of its utility.  While the large, angular and faceted structures are stylistic and sculptural, they guide and direct visitors and share visual elements of the brands they represent.  To show them without the human element they are designed for would be cold and empty.  Above, the press flurry around a model, a vehicle and a stage, all of which stand stoic amongst the shuffle. 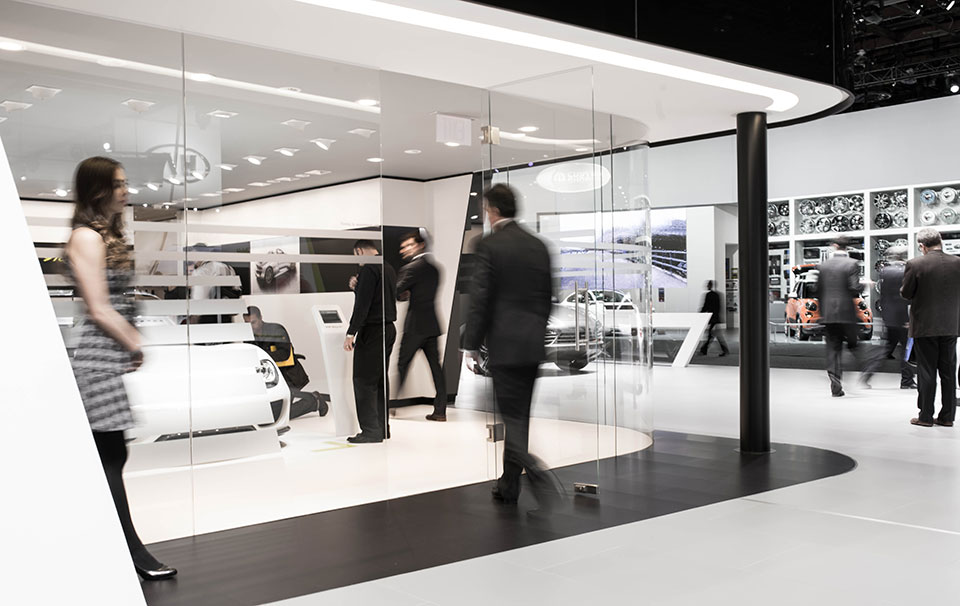 Glass, metal, wood and plastics combine to yield impressive structures throughout the auto show.  Some, like the curved glass “case” above, restrict traffic to vehicles in a way that communicates their exclusive nature.  The curves of the glass are also repeated in the vehicle within, another likely deliberate design decision. 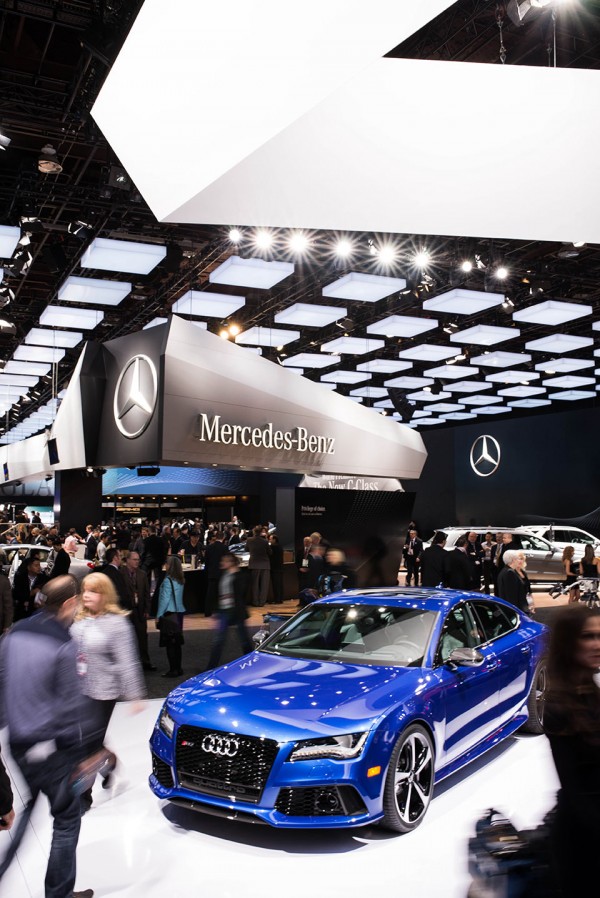 Light is everywhere at the North American International Auto Show.  There are spot lights in the ceiling, lit sections of displays, handing pendant lamps in meeting areas, and the guests themselves introduce a lot of light with camera flashes and TV/video lights.  All of these are reflected in the vehicles, and different designs have ways of controlling the light or introducing very specific reflections of their own. 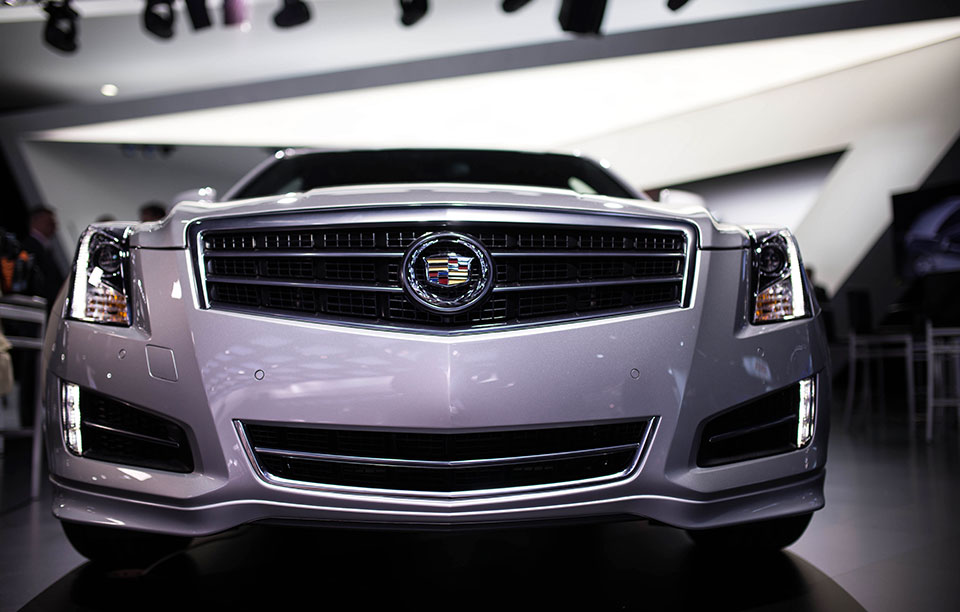 The sharp, angular facets of the backdrops in the image above echo the design characteristics of the vehicles they support.  It’s a way of presenting a complete message, with visual continuity between product and space.  The bold, decisive elements in the sharp, high contrast background elements are suggestive of these same characteristics in the product itself. 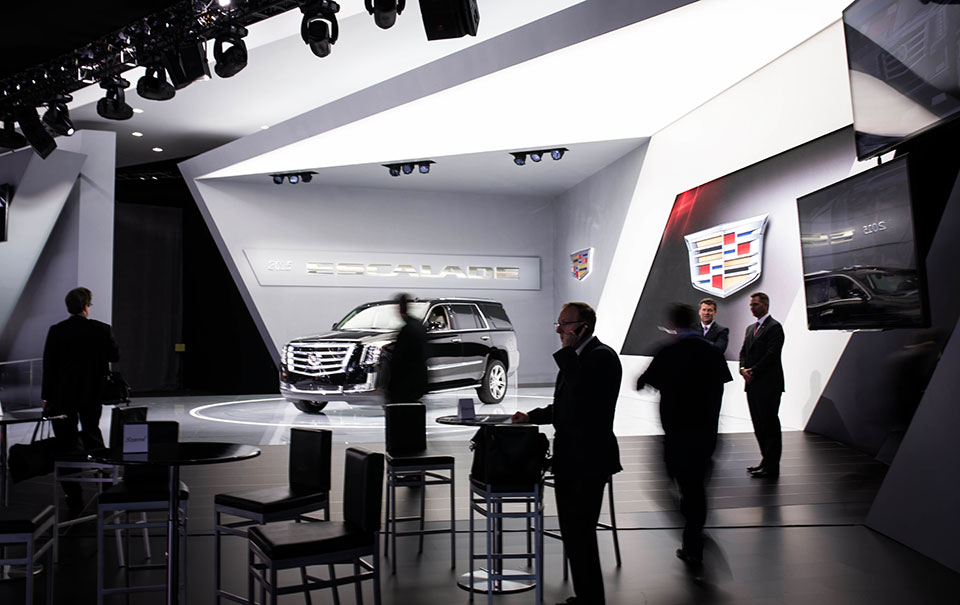 Independent of the vehicles and the brands they support, some of these set designs would be celebrated works of architecture.  Change the context, and these sculptural and progressive designs would fit a museum or a municipal offering, or on a smaller scale, a trendy retail environment. 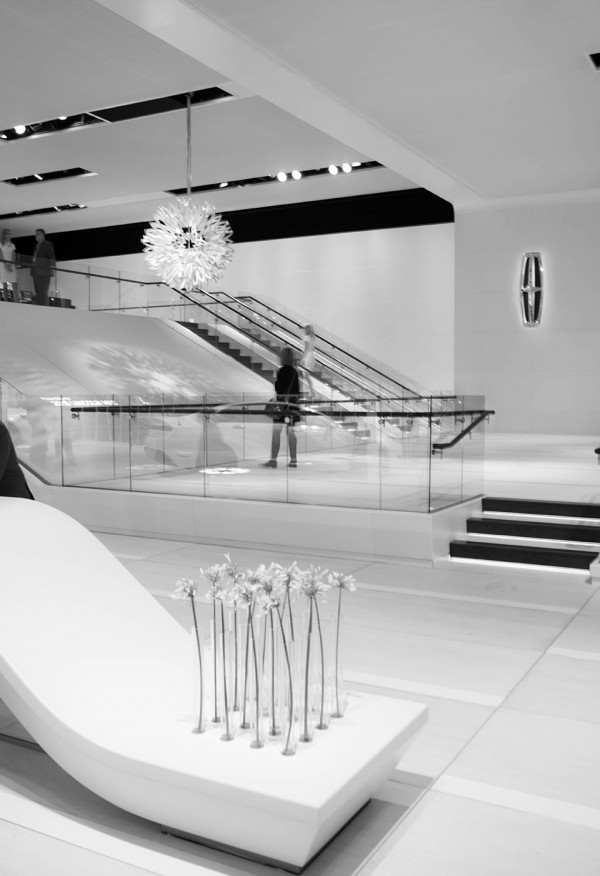 Natural elements are often introduced into these background designs.  In this case, the flowers at the base and the flowery shape of the pendant above suggest ecological influences.  As brands focus on sustainability in the vehicles they produce, symbols like this are communicative to their audience.  Some communicate this message deliberately, others symbolically, and others still leave this discovery up to the individual. 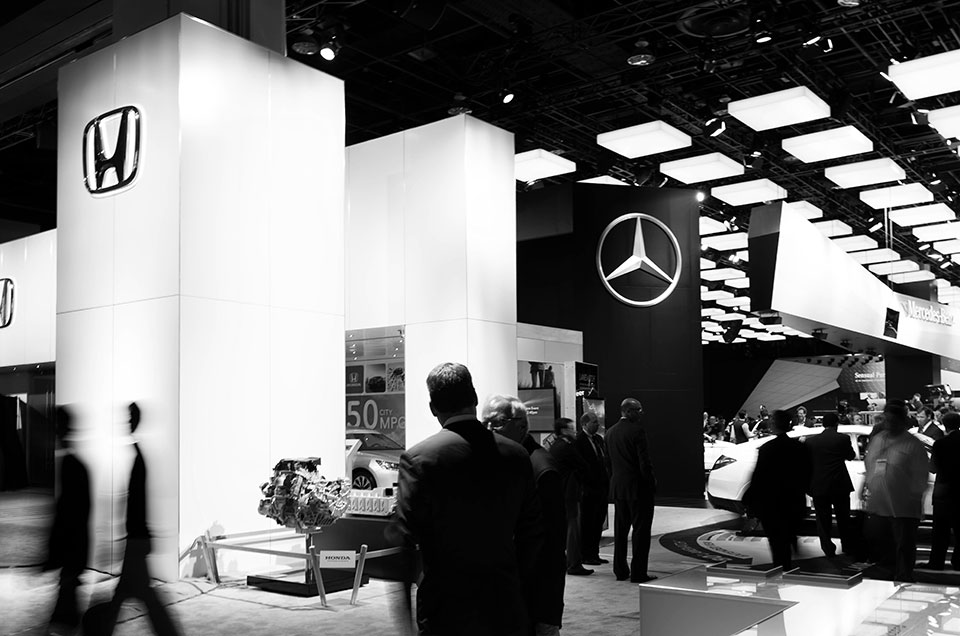 Eye candy is everywhere for an architectural photographer or even a casual guest.  These displays will serve the press, then the automotive industry, then the public at large for several weeks. 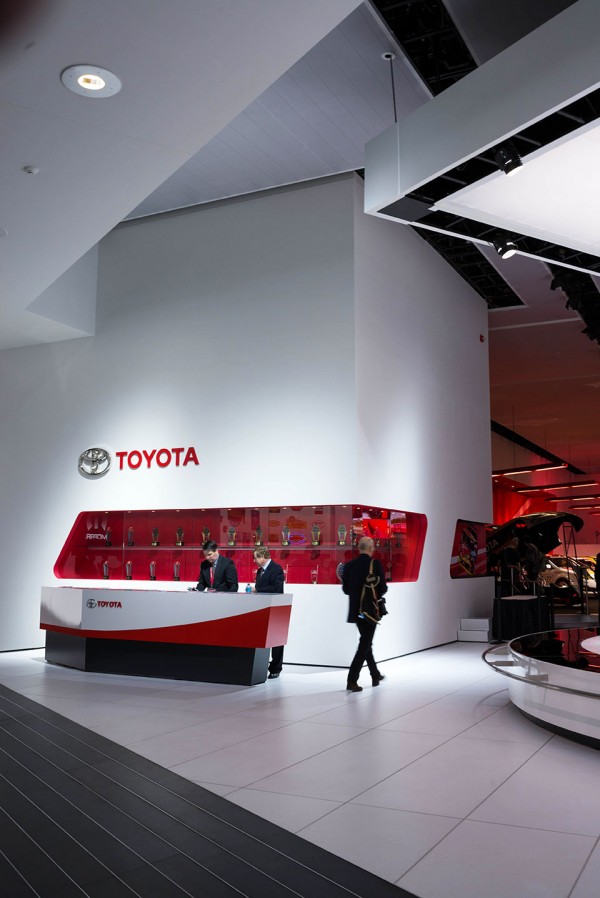 Visually, design elements and shapes often intersect between the show floor and the displays themselves.  Above, the direction of the floor pattern mirrors the ceiling elements, the angles of which are repeated in the trapezoidal design elements of the booth itself.  Colors are also used to provide visual accent to an otherwise neutral space. 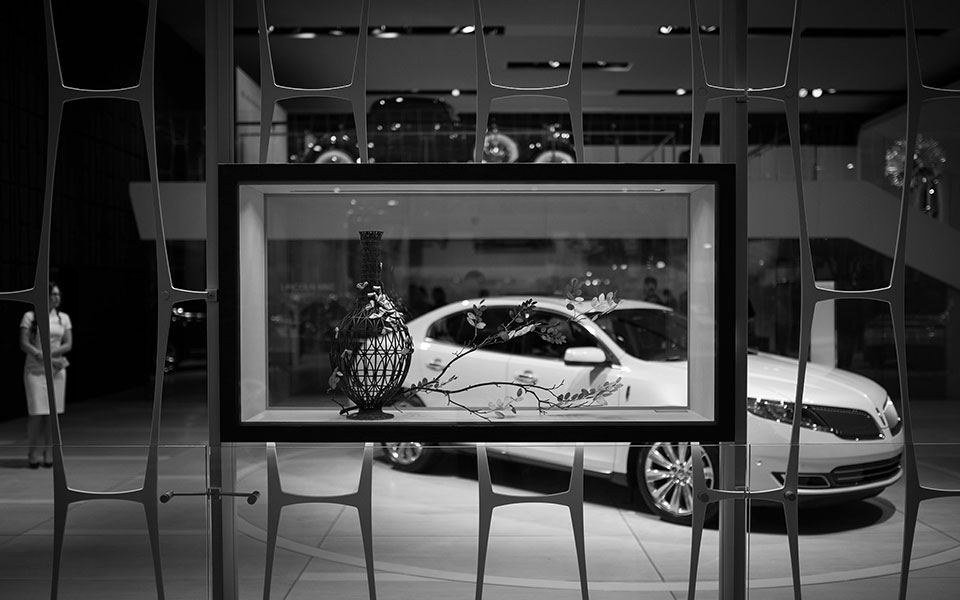 Art and sculpture are no strangers to auto show display design.  The encased art above continues the natural elements communicated with the flower icons within the display. 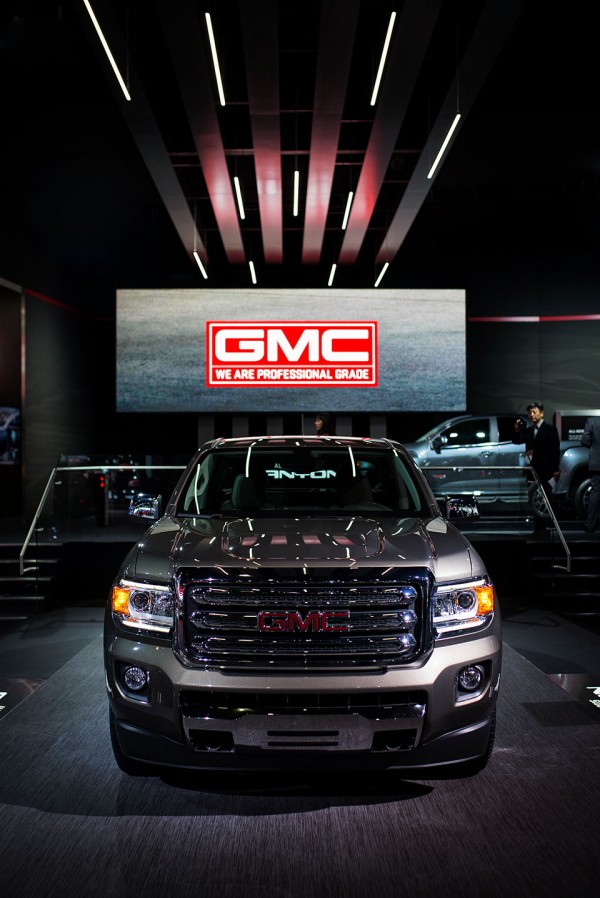 The lighting patterns within the display are deliberately designed to reflect off of the vehicle itself.  Above, the already powerful looking truck receives visual suggestions of motion and shine in a controlled manner. 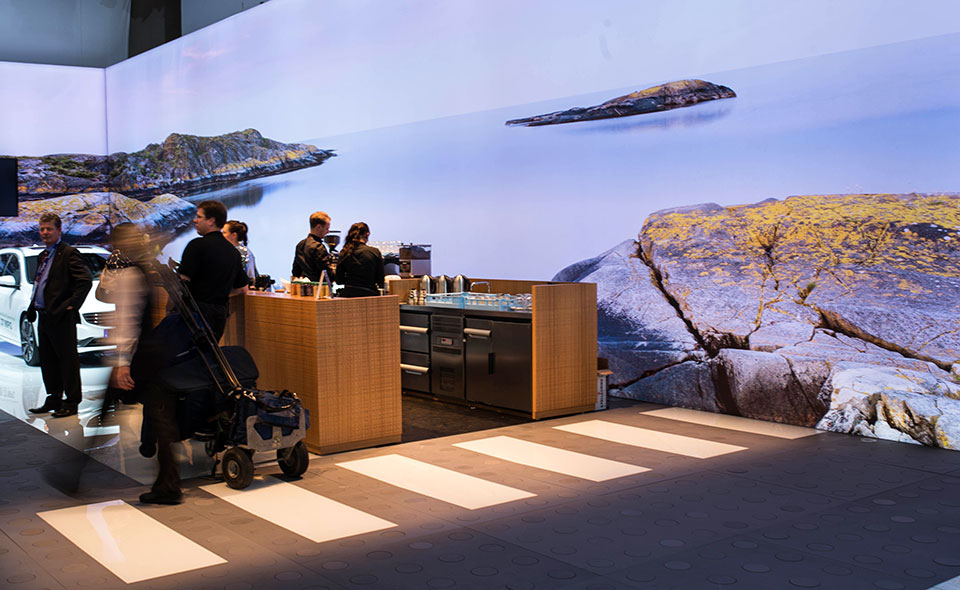 Above, this booth cafe stands in front of a wrapping photograph of the waters of the brand’s home country.  It communicates the background of the brand while also suggesting a natural, sustainable manner of business. 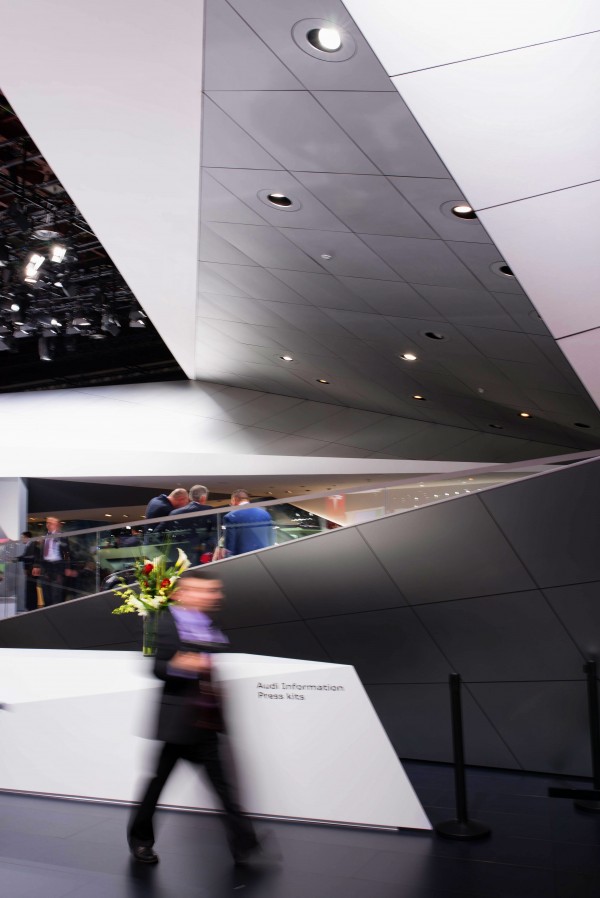 The shapes and patterns of the auto show architecture could stand permanently as a museum installation or exterior design element.  In part, it’s unfortunate that these designs have temporary uses.  They communicate the brand’s message, make an impression on the visitor and are ultimately disassembled.  Part of the reason I endeavored to capture these displays in an architectural photographic sense is to preserve their beauty.  They may be overlooked by most, playing a background role, but I can at least appreciate them for as long as these digital photographs last. If you feel the same, there are plenty more photographs in the gallery below.

The Architecture of the Auto Show: 2014 | Gallery