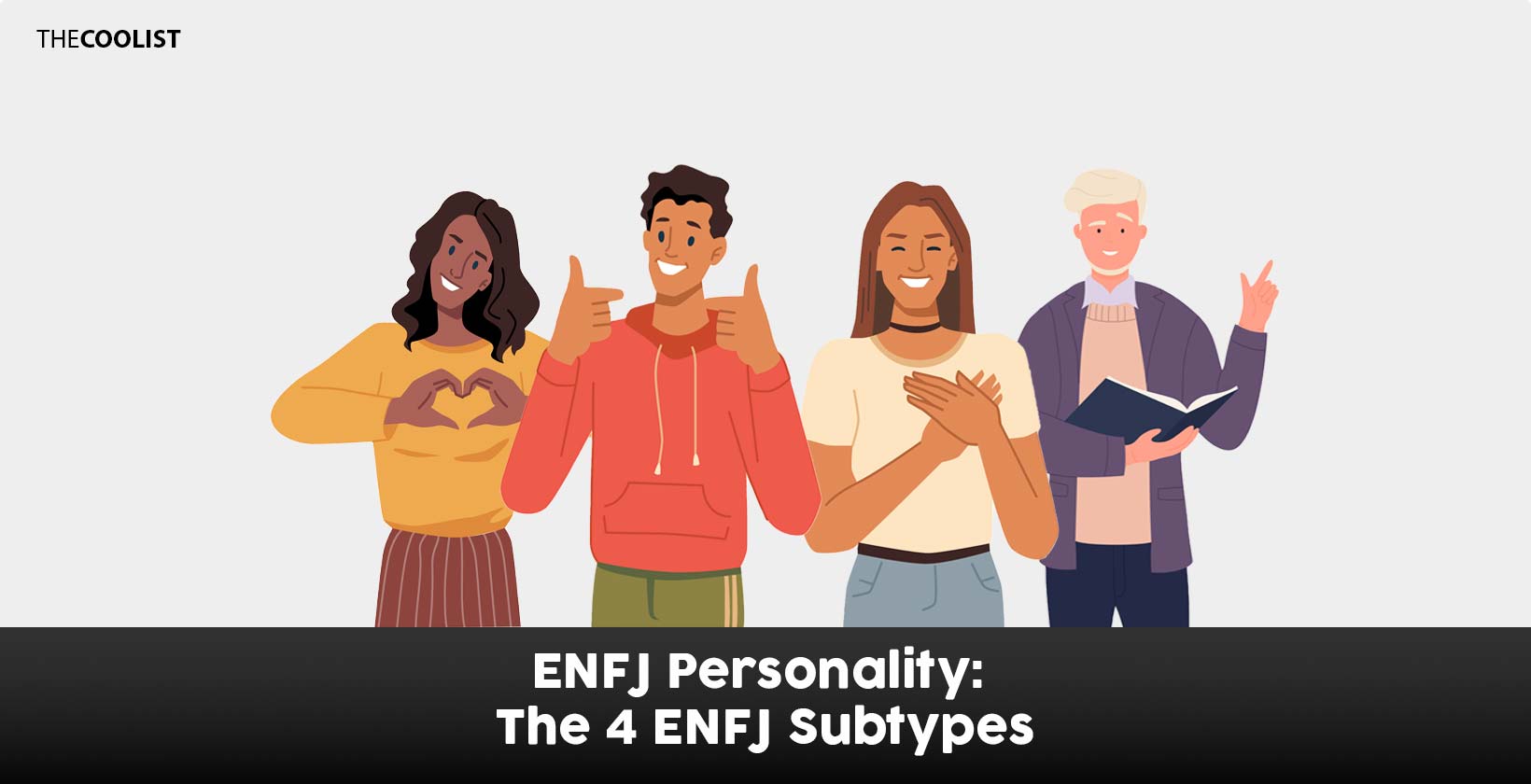 The ENFJ personality type consists of four subtypes: ENFJ-A+, ENFJ-T-, ENFJ-A-, and ENFJ-A+. Every type of ENFJ shares the same traits of Extraversion, iNtuition, Feeling, and Judging, which collectively describe “The Giver” character archetype. Givers are charismatic, generous, and eager to connect with other people.

However, each ENFJ subtype has notable differences in how they view and interact with the world. For example, Assertive (A) personalities are confident and self-assured, while Turbulent (T) personalities are idealistic and apprehensive. Furthermore, both of these personality classifications have positive (+) and negative (-) variants.

In summation, the four ENFJ subtypes are as follows.

ENFJ-A+ represents the Assertive Leader subtype. Leader subtypes are persistent and always striving for greatness. The ENFJ-A+ subtype has a congenial and lively attitude. ENFJ-A+ Leaders fear expressing vulnerability because they want to feel helpful and in control of a situation. Leaders desire fellowship and guiding others in acts of altruism.

The Assertive Leader subtype possesses a positive mindset. Instead of ENFJ-A+s seeing their mistakes as failures, they see mistakes as a chance to learn. A famous civil rights activist with ENFJ-A+ characteristics is Maya Angelou. Angelou led others with kindness and sought to learn how to be a better person throughout her life.

ENFJ-T- represents the Turbulent Follower subtype. Follower subtypes are nonjudgmental but are highly critical of personal failures. The ENFJ-T- subtype has a sensitive attitude towards external stimuli and skepticism of other peoples’ opinions of them. ENFJ-T- Followers fear rejection, and to combat possible rejection, they will tirelessly work to benefit other people. Followers desire self-improvement and want to conform to fit the status quo to avoid displeasing other people.

The Turbulent Follower subtype has a way of thinking that denotes each shortcoming as a major flaw. ENFJ-Ts are unable to offer themselves the same grace as they offer others. An inspirational leader who demonstrates ENFJ-T- traits is Martin Luther King Jr. As an ENFJ-T-, Dr. King focused on work and helping other people to the detriment of his quality of life.

ENFJ-A- represents the Assertive Fighter subtype. Fighter subtypes are individualistic and self-reliant. The ENFJ-A- subtype has a domineering attitude that they use to accomplish their goals. ENFJ-A- Fighters fear sacrificing their independence and grow frustrated when they feel they are not accepted or appreciated. Fighters desire acceptance and hold themselves to high standards of living.

The Assertive Fighter subtype has a way of thinking that keeps them dutiful in their quest for self-improvement. However, ENFJ-A-s are prone to discontentment if they feel they aren’t measuring up to their high standards. A famous politician who matches ENFJ-A- traits is Mikhail Gorbachev. Gorbachev is firm in his beliefs, but his leadership qualities leave him with concerns over whether others support him.

ENFJ-T+ represents the Turbulent Pleaser subtype. The Pleaser subtype is outgoing and thrives in social situations. The ENFJ-T+ subtype has an outwardly positive and giving attitude that they exude to gain approval from other people. ENFJ-T+ Pleasers fear others viewing them as despondent, so they try to fit in with other people and force positivity. Pleasers desire success and social approval because they gain fulfillment from other people’s appreciation of their generous spirit.

The Turbulent Pleaser subtype has a way of thinking that pushes them to remain upbeat and inviting. However, ENFJ-T+s are subject to self-doubt if they sense disapproval. A famous ENFJ-T+ is Dakota Fanning. As an ENFJ-T+, Dakota Fanning projects confidence and composure at all times.

What is an ENFJ personality type?

What are the main characteristics of an ENFJ?

There are three main characteristics of ENFJ personality types. Firstly, ENFJs are philanthropic. ENFJs are generous, giving their time and energy to universal welfare. Secondly, ENFJs are outgoing. ENFJs enjoy socializing and making friends. Thirdly, ENFJs are nonjudgmental. ENFJs are accepting of other people and refrain from making assumptions or judgments.

How does each subtype deal with other personality types?

How do ENFJ subtypes deal with stress?

Is ENFJ a rare personality?

No, but ENFJ is fairly uncommon. Evidence shows that ENFJ makes up 5.7% of the population. ENFJ is more common in men at 7.6%, while Giver women represent just 5.2%. ENFJs of any gender or subtype tend to stand out among the general population due to their natural leadership skills and ability to remain calm in hectic situations.