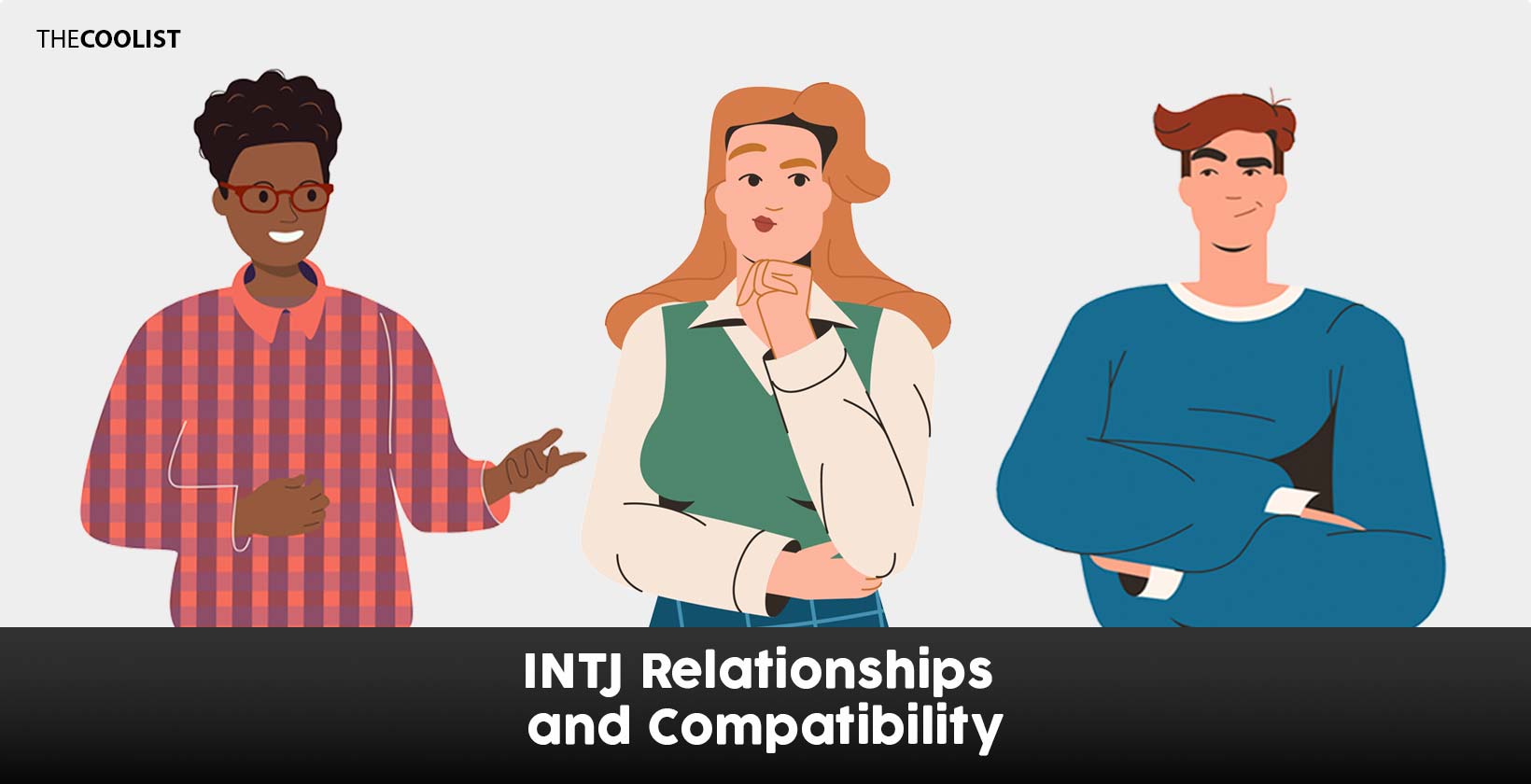 INTJ relationships and compatibility are shaped by INTJ personality type’s dominant Jungian attitudes: Introversion (I), iNtuition (N), Thinking (T), and Judging (J). INTJs’ dispassion, severe introversion, and steadfast reliance on logic limit INTJs’ relationships and make them one of the least compatible personalities on the Myers-Briggs Type Indicator (“MBTI”). But while INTJs are serious characters who are not the easiest to get to know, they deeply cherish the few relationships they have and are profoundly loyal to their loved ones.

In this article, you will learn about INTJ relationships and compatibility in romance, friendships, and professional life. You will also find out how INTJs interact with other personality types and their fellow INTJs.

What is INTJ personality?

The INTJ personality is one of sixteen personalities identified by the MBTI using the fundamental psychological attitudes first proposed by Carl Jung. According to the MBTI, INTJs’ dominant attitudes are as follows.

These four aforementioned functions govern how INTJs view and interact with people around them.

The INTJ personality is also known as “The Mastermind” because they are confident, intelligent, strategic thinkers who value logical reasons above emotions. However, these traits can make INTJs appear cold and distant and impinge on their ability to cultivate close personal relationships with people.

How to communicate with an INTJ personality?

To communicate with an INTJ personality, you should employ two strategies. First, keep the conversation direct and logical. INTJs are not fans of small talk, or what they deem petty social niceties. INTJs are serious characters who dislike activities they perceive as wasteful, including unnecessary communication. So, if you’d like to communicate with an INTJ effectively, arrive at your point quickly and stay on topic throughout the conversation. Second, be respectful of the INTJ’s opinion. INTJs are highly confident thinkers who are often dismissive of others’ counterpoints, and offering a criticism of their opinion could effectively close the communication channel you’ve just established with them.

How does an INTJ deal with their emotions?

An INTJ deals with their emotions by repressing them, and this tendency can negatively affect their compatibility with others. INTJs are naturally logical and introverted personalities, and they find dealing with emotions taxing. Masterminds would rather look for logical reasons as to why they feel a certain way than expose the true, emotional causes. An INTJ would rather ignore emotions or emotional stressors than deal with them head-on. INTJs’ reluctance to open up and their tendency to keep social contact to a minimum means INTJs will internalize their emotions, bottling them up for as long as possible. INTJs’ tendency to not display their feelings makes them come off as cold and detached, which is why INTJs often struggle to form relationships with other people.

However, many INTJs find writing to be an effective way to process their emotions. Writing gives INTJs an outlet for their feelings but lets them remain detached from the words they’ve written.

How does an INTJ behave as a friend?

As a friend, an INTJ behaves in a detached manner at first, but becomes extremely loyal after establishing their friends’ trustworthiness. INTJs do not make friends quickly because they’re not compatible with most other personality types and have an innate disinterest in personal relationships. However, once a Mastermind considers someone as a friend, they are intensely loyal. If an INTJ tells a friend they will do something for them, they will do it no matter the cost.

INTJs value honesty, and as friends, they are always ready to give you their honest opinion, whether their words are pleasant or harsh. INTjs communicate in a straightforward way, and their words can often come across as brutal, blunt, or even rude. INTJs’ abrupt nature can cause friction between friends. However, INTJs are not intentionally mean. Masterminds care deeply about those they consider friends and want to help them be the best version of themselves. INTJs will work tirelessly to help a friend develop as they do themselves.

How does an INTJ behave as a child?

As a child, an INTJ behaves in a strong-willed, independent, and highly curious manner. Young Masterminds develop their character traits early and search for meaning in the world around them. INTJ children defy the standard conventions of childhood. In childhood, INTJ relationships and compatibility with other kids are limited because a young INTJ is likely to prefer spending time alone and have a fierce independent streak. INTJ children want to learn how to do things on their own without the interference of others, including their parents.

Little Masterminds are natural perfectionists and often feel as if they are not compatible with other children. An INTJ child can struggle to fully understand the heavier sides of their personality and, as such, can often feel as if they do not belong, misunderstood by children and adults alike.

Which personality type is most compatible with an INTJ?

The personality type most compatible with an INTJ is the ENTJ (also known as “The Commander”). Both INTJ and ENTJ personality types are serious and driven by their careers. ENTJs and INTJs have little need for emotional intimacy and will respect each other’s need for independence. Masterminds and ENTJs share an affinity for deep intellectual conversations over petty small talk and will find additional kinship. These common traits are important in INTJ relationships because INTJs prefer a partner with whom they share a deep intellectual connection.

What do INTJs want in a relationship?

In a relationship, INTJs want a truthful, honest, and intellectual connection with a like-minded partner. Masterminds prefer a partner who is unafraid to be themselves and one who respects the INTJ’s need for independence.

INTJs struggle with emotions and, as such, want a relationship with someone who understands their nature and is patient enough to help them come out of their shell. INTJs are always looking for ways to improve themselves and appreciate a partner who shares the same desire for self-improvement and appreciates their innovative approach to life.

How does an INTJ behave as a lover?

As a lover, an INTJ behaves in a reserved fashion. INTJs are not big on grand displays of emotion or affection in a relationship. However, Masterminds are fiercely loyal and will be highly attentive when their partners require attention.

INTJs display affection primarily through touch or by giving gifts when they’re in love because they are not good with subtlety or hints. While INTJs are not quick to get close to people, INTjs rely heavily on touch to convey their feelings to a romantic interest. Touch and gifts are great non-verbal ways to express emotions INTJs otherwise struggle to put into words.

How does an INTJ behave as a parent?

INTJs behave in an attentive and respectful way as parents. Masterminds find parenting highly rewarding and enjoy being able to watch their children grow and develop under their guidance.

What makes an INTJ leave a relationship?

Lack of trust makes an INTJ leave a relationship more so than any other factor. INTJs value trust and honesty in their friends and lovers. Masterminds will retreat if someone is false or proves themselves to be untrustworthy.

However, INTJs will walk away from any relationship when it is the logical thing to do — even if lack of trust isn’t the issue. INTJs are highly logical characters and view relationships with the same steely eye, so they won’t hesitate to part ways with a partner if it makes no sense to them to continue the relationship.

Masterminds do not display much emotion when leaving a relationship, as they have already rationalized to themselves that it was the sensible thing to do.

An INTJ-to-INTJ relationship would look like an excellent match, but there’s a possibility for friction between the Mastermind partners. An INTJ and INTJ relationship compatibility is quite strong. Other INTJs thus make ideal partners because they possess these traits. However, too many similarities can lead to a serious misunderstanding between two Masterminds. INTJs are self-confident to a fault, and finding common ground in an argument is not a Mastermind’s strong suit. So, if an INTJ finds themselves in a relationship with a fellow INTJ, they should make a conscious effort to subdue their dominant attitudes and just let some things go.

When two INTJs break up, the separation is outwardly calm. The INTJ initiating the breakup has already rationalized the separation to themselves, and likely did so with their partner. The INTJ on the receiving end of the breakup may be blindsided by the move and struggle to let go, but is likely to remain composure as they rationalize the situation and repress their feelings.

What’s the hardest partner for an INTJ?

ENFP is the hardest partner for an INTJ. ENFPs are extroverted characters who love to live in the moment and have fun in all their activities. INTJs have very little common ground with ENFPs, and any relationship between them would have too few common foundations from which they could build.

Are INTJs afraid of relationships?

No, INTJs are not afraid of relationships, but others may feel that INTJs have a phobia of romantic partnerships for two reasons. First, INTJs lack a strong enough interest to actively pursue relationships (unless they meet the rare person that intrigues them in a romantic way). INTJs’ disinterest in romantic partners may come across as a phobia to some. Second, INTJs are very serious personalities and have little desire for overt displays of emotion or engaging in small talk. Others may misperceive INTJs’ coldness as a fear of relationships. In reality, INTJs do not fear relationships at all — they will embrace their romantic connections if they’re convinced that the partner is trustworthy and a right match for their intellect.

Is romantic love a weakness of an INTJ?

Yes, romantic love is a weakness of an INTJ personality type. INTjs struggle to open up and display any form of emotion. Masterminds enjoy a high degree of independence and do not need to be surrounded by people. Once INTJs decide to open up to someone, they can remain somewhat blunt and stoic in their mannerisms.

INTJs enjoy the idea of intimacy and are eager to work towards perfecting it, but it is not a driving concern. Masterminds enjoy showing affection in ways that don’t require words, such as through touch and giving gifts – particularly on ‘regular’ occasions rather than the societally dedicated days.