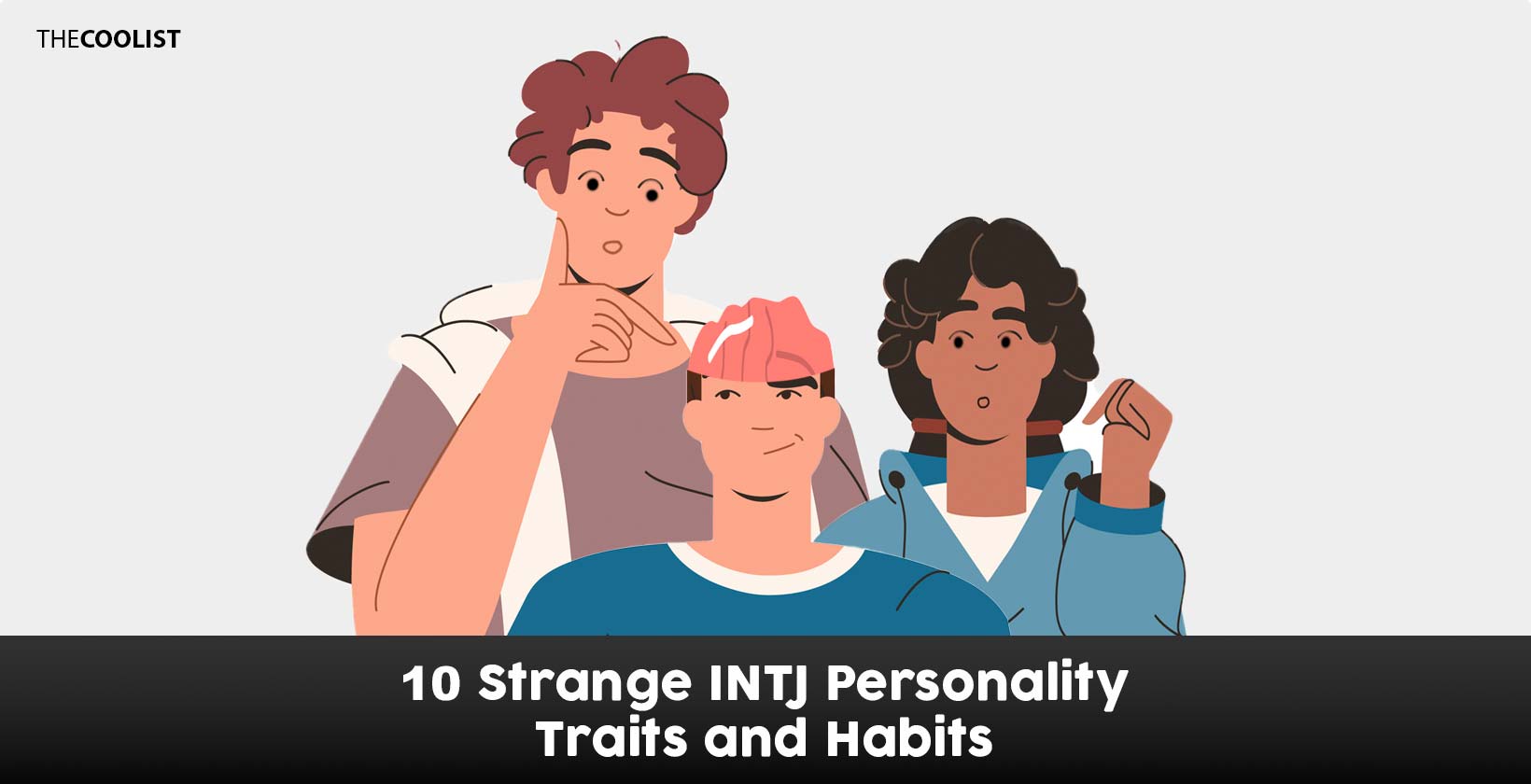 The INTJ personality has a number of interesting traits and habits beyond its fundamental Introverted (I), iNtuitive (N), Thinking (T), and Judging (J) characteristics. The Mastermind personality is known to be analytical and rational with an innovative mindset. These archetypal INTJ qualities have earned this personality type its other monicker, “The Architect.” Yet, INTJ has weird habits set them apart from other personality types. Below are the ten unique and peculiar INTJ personality traits and behaviors.

INTJs do not smile often, and this strange INTJ personality trait stems from two causes. First, INTJs dislike displaying feelings. So, an unsmiling Mastermind isn’t necessarily miserable, but rather comfortable with their emotions without showing them all the time. Second, INTJs are very practical and see no need for social niceties, so they tend to only smile when they are genuinely ecstatic rather than merely to keep up an appearance. For example, when shown around a new workplace, an INTJ will not smile at every new colleague they meet.

One of INTJs’ strange personality traits is that Masterminds enjoy being. INTJs prefer solitary life for two reasons. First, INTJs prefer the single life because solitude allows them to focus on their goals. The INTJ is a driven personality and distractions offered by romantic interests become a nuisance to them. INTJs remain fiercely independent even when in a relationship. Second, Masterminds prefer to stay single if they can’t meet a partner who meets their very specific set of criteria. INTJs are perfectionists with very high standards, and their perfectionism carries over to what they want in a relationship. Many people do not pass an INTJ’s selection test, so INTJs find themselves alone. For example, an INTJ would enjoy being single over dating a character such as an ENFJ or ISFJ as they view life differently. The INTJ would see a relationship as time they could better invest in personal advancement.

INTJs don’t always respond well to compliments, and this strange INTJ trait is caused by two reasons. Firstly, compliments make INTJs feel awkward because they do not know how to react genuinely and generally struggle to process and express emotions. As a result, INTJs would rather ignore the compliment than offer a less authentic response. Secondly, INTJs are perfectionists and may find themselves unworthy of praise, especially when they feel they could have done better on a certain task. For example, congratulating an INTJ on a job well done will most likely make them feel uncomfortable and they would rather be left alone to get on with more work.

INTJs are loyal to a fault, and this peculiar INTJ trait stems from Masterminds’ preference for quality over quantity in personal relationships. INTJs are natural introverts who find it draining to spend time with lots of people. Instead of socializing with large groups, Masterminds enjoy very close relationships with a tight-knit group of trusted friends, and typically have a small but highly dedicated social circle. INTJs’ emotional struggles make it hard for them to make new friends, which compounds their loyalty to the ones they have already. For example, if a friend has a significant role in an INTJ’s life and their future plans, the INTJ will do whatever they can to stand behind that friend, encouraging them to be the best version of themselves. INTJs’ loyalty applies to friends and romantic interests alike.

Easy irritability is a peculiar INTJ trait that stems from two distinct Mastermind tendencies. First is Masterminds’ perfectionism and high standards, to which they hold themselves and others. INTJs expect perfection and dedication from those around them, and will quickly become irritated with people they feel do not give 100%. To avoid being irritated by other people’s perceived incompetence, Masterminds prefer to work alone or pursue solitary hobbies. Second is INTJs’ independence, which Masterminds deeply cherish. INTJs get annoyed quickly when someone tells them what to do. For example, INTJs are very easily irritated when they’re being micromanaged or when dealing with people who do not meet their perfectionist standards.

INTJs love engaging in a good debate, which is a notably peculiar INTJ trait given their introverted nature. INTJs enjoy debating for two main reasons. First, INTJs enjoy having an opportunity to share the vast reservoir of information they’re constantly accumulating. INTJs have an innate thirst for knowledge, which means they have thoughts on a lot of potential debate topics. Second, Masterminds are natural-born leaders and will resist anybody who tries to sway their opinion. INTJs will stand their ground and argue their case if they feel they are right or forced to do something they don’t want to do. For example, an INTJ might engage in a strong debate in the workplace if someone challenges their methods.

INTJs are prone to experiencing sensory issues because they are often too focused on the multitude of thoughts bouncing around their heads. This peculiar INTJ trait stems from Masterminds’ intuition, which gives them a tendency to daydream. On the other hand, Extraverted Sensing (Se) is INTJs’ inferior function, which means they perceive external stimuli as unwanted noise. For example, INTJs lost in thought are more likely to bump into things, fall over, or suffer other clumsy mishaps.

Having strong preferences is a peculiar INTJ trait that’s caused by two main factors. First, INTJs are highly confident individuals who know very well what they want out of life. INTJs’ self-confidence leaves no room for them to question their preferences in any aspect of their lives. Second, INTJs are fiercely independent and view conforming to everyday conventions as a form of underachieving, so they are highly dedicated to finding their own path. INTJs’ distaste for following the norm makes them dead-set in their preferences as a matter of principle. For example, it would be near-impossible to sway an INTJ to try something new if they’re convinced that their own preferred solution works well.

9. INTJs may abruptly leave a situation

INTJs may leave a situation if they think they’re presence is pointless, and this strange INTJ personality trait is rooted in the Masterminds’ rational nature. Such abrupt behavior on the part of an INTJ comes across as cold and uncaring. But, in reality, it is simply the INTJ rationalizing it to themselves that if they get nothing positive from an interaction, there is no need to stick around for it to finish. For example, an INTJ will stand up and leave a gathering without second thought if they see no benefit to their continued presence.

10. INTJs can be extremely emotional

Masterminds are known to be extremely rational, so their proneness to intense (but rare) emotional outbursts is a highly strange INTJ characteristic. INTJs’ tendency to get emotional stems from three main causes. First, INTJs dismiss feelings in favor of logical thought, and in the process, they bottle up their emotions. Second, INTJs are inherently inept at displaying their emotions in a healthy manner. Masterminds are aware of this socially awkward trait, and thus prefer to not display their feelings at all, which represses their emotions even further. Third, INTJs are easily triggered when things don’t go according to their plans or when someone doesn’t measure up to the INTJ’s high standards. Such triggers can cause all of the INTJs’ suppressed emotions to erupt at once. For example, an INTJ can become emotional when they feel others members of a team are not pulling their weight.

What is the INTJ personality?

The INTJ personality, also known as The Mastermind, characterizes people with Introverted, iNtuitive, Thinking, and Judging traits. INTJ is one of 16 personality types identified by Carl Jung and used on the Myers-Briggs Type Indicator (“MBTI”). The Mastermind personality is analytical, innovative, and values logic above all else. INTJs’ unwavering rationality sees Masterminds labeled as cold, aloof, emotionally distant, and is the root cause behind many strange INTJ personality traits. Naturally introverted, the INTJ personality shies away from groups and prefers to keep the company of a small group of close friends — another INTJ trait that’s often perceived as strange and eccentric. INTJs’ intelligence and strong drive to succeed leads them to dismiss or become enraged at people they deem intellectually inferior, which is also perceived as a strange trait by other personality types.

Learn more about The Mastermind (INTJ) personality type and its characteristics and traits here.

What personality type is the best match for an INTJ?

The personality type that is the best match for an INTJ is the ENTP, for two reasons. First, INTJs best match with other intellectual personality types. ENTPs are intellectual characters who, like INTJs, are goal-oriented and motivated by success. Second, ENTPs can easily bring INTJs out of their shells, but are smart enough to deal with the many strange INTJ traits diplomatically. Because of their ability to build a quick rapport with INTJs, ENTPs are compatible with INTJs as friends and romantic partners.

How does an INTJ deal with their emotions?

INTJs deal with their emotions poorly. INTJs are emotionally unintelligent, with their overreliance on logical thought leaving them unaware of what they are feeling. Masterminds are often overwhelmed by emotional events, which makes them highly uncomfortable. By applying strict logical thought to emotional moments, INTJs come across as cold and uncaring. In fact, dealing with emotions is one of the major stress factors for Masterminds.