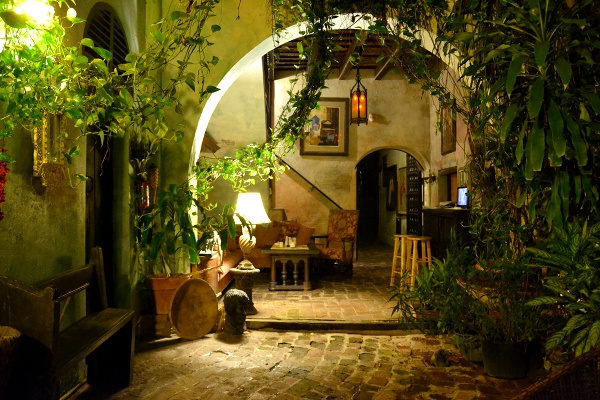 The Gallery Inn – Authenticity.  When a traveler sets their sights on Old San Juan, authenticity is their aim.  In this, the oldest city in the reach of the United States, authenticity is everywhere, but it is rarely experienced in greater depth than in The Gallery Inn.  This boutique hotel is as much a gallery, a garden and a community as it is a hotel, a rare escape from a world that has become too industrialized, too impersonal, too Mickey Mouse and modernized for our blood.  The Gallery Inn is a welcome escape, an authentic destination of its own in a city that everyone must experience.

The community of Old San Juan was founded over 500 years ago, sparked by the discovery of Christopher Columbus and championed by the hard work of locals and foreigners alike.  Old San Juan is like no other city in the jurisdiction of the United States.  It is native, it is Spanish, it is the result of cultural influences from the Caribbean, Europe and Africa, all of which coincide in a small stretch of land bordered by the sea on all sides.  The food, the architecture and the tradition are alive in a fashion that turns first time visitors into life-long adherents to this very special sacrament.

Continue reading TheCoolist’s review of The Gallery Inn below… 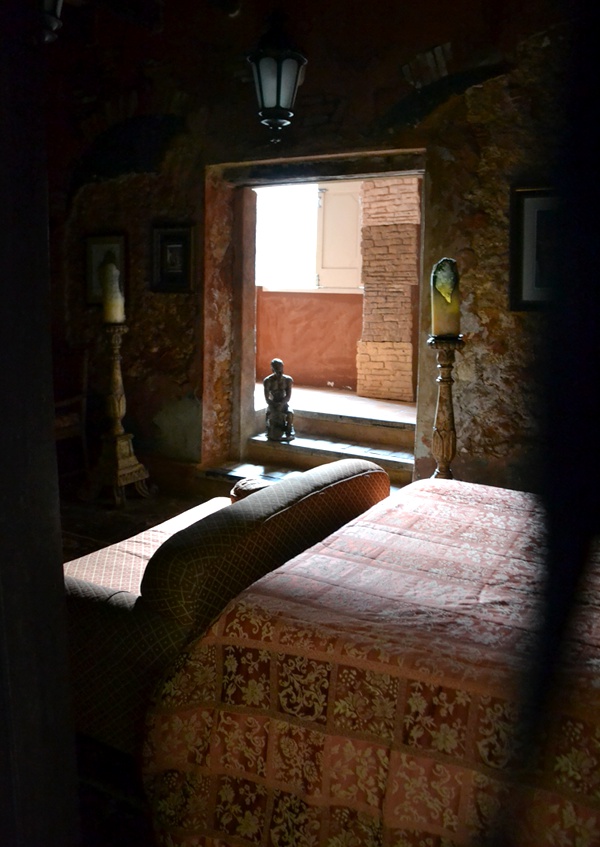 On the highest heights of the old city, a collection of buildings have been faithfully restored and enjoined into a luxury-class hotel.  The Gallery Inn begins a few steps from the ancient wall of Old San Juan, overlooking the Caribbean Sea to the North and the glimmering city to the South.  It is the heart, soul and art gallery of artist/hotelier Jan D’Esopo, a sculptor and painter whose art rests proudly in every corner and common room of the hotel’s grounds.  D’Esopo purchased the first section of the gallery over 50 years ago, when this tough old town was a destination for trouble, not tourism.  With a lot of hard work and even more passion, Jan and the city around her turned their neighborhood into a cultural retreat where artists, executives and even United States Presidents would one day come to explore. 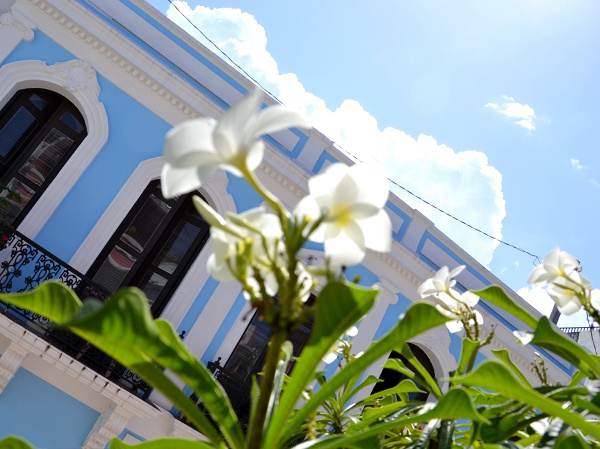 During his 2008 presidential bid, President Barack Obama and wife Michelle stayed at The Gallery Inn while campaigning in Puerto Rico.  Obama and his staff called The Gallery Inn home, and the First Lady became a subject for a sculpted portrait by Jan D’Esopo herself.  The statue rests in a central garden of the hotel, viewable by guests as they approach the gallery’s dining veranda. 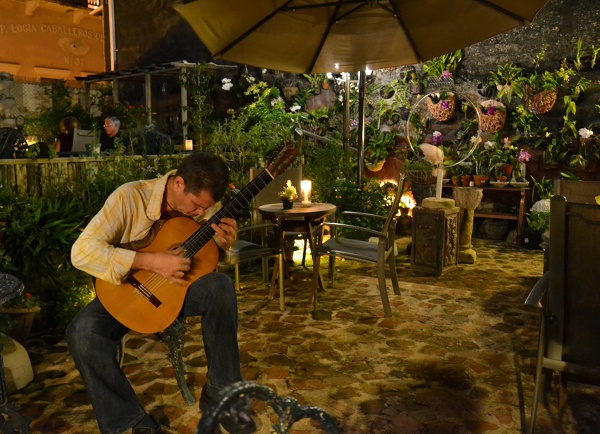 A central, terraced veranda welcomes guests to relax, dine or swim in the salt water pool at its base.  A wall of orchids lines its eastern border, tropical birds sing along its center, and a new age garden stands at its peak where fresh produce is cultivated for the meals du jour.  Jan D’Esopo and her husband Manuco join guests each evening while classical guitarist Felix Rodriguez serenades the crowd.  If you close your eyes and breathe deeply, it’s hard to tell if you’re sitting in the new world or the old– or perhaps the perfect center. 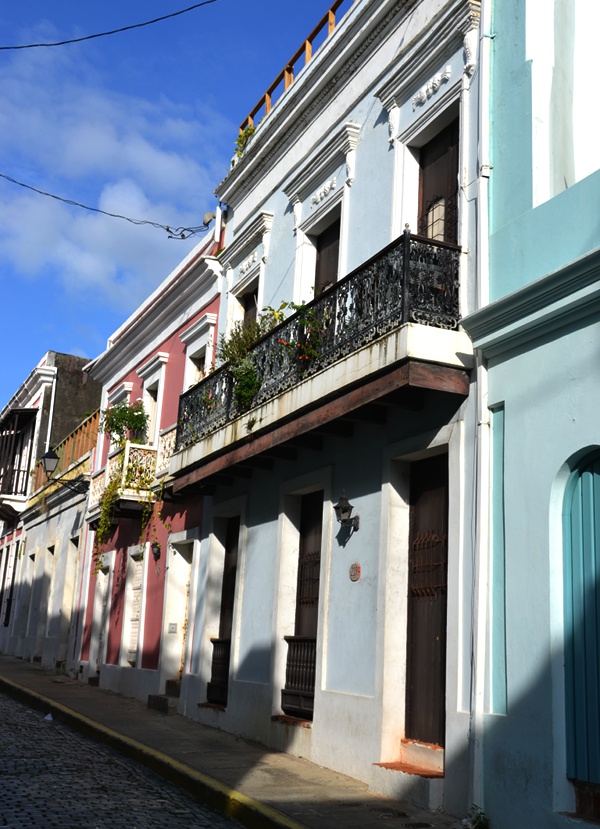 Old San Juan is a special place in the Caribbean, and just as special across the reach of North America.  Its Spanish Colonial architecture, exotic color-schemes and cultural vibrancy makes for an unique setting.  From the names of the streets to the bricks within them, this UNESCO World Heritage Site has a history unparalleled in modern America.  The blue cobble stones that line Old San Juan were shipped from Spain during the exploration of the new world in the 1500s.  Nearly ever step of Viejo San Juan is paved with history, while native culture serves to accent its international importance. 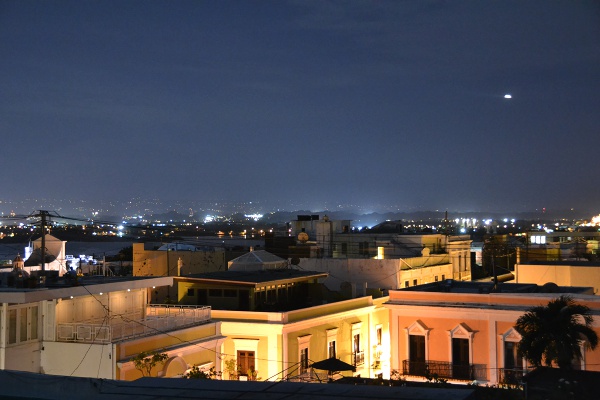 Climb to the peak of The Gallery Inn, and a guest can see Old San Juan in all of its glory.  Situated at the top of a hilly landscape, the hotel’s rooftop deck provides panoramic views of the city and the sea in all directions.  The waves of the Caribbean break to the north, cruise ships hum in the south and a constellation of lights illuminate the mountains of Puerto Rico in the distance.  It is quiet, peaceful and deafening all at once, the perfect contrast to explore over a glass of red wine. 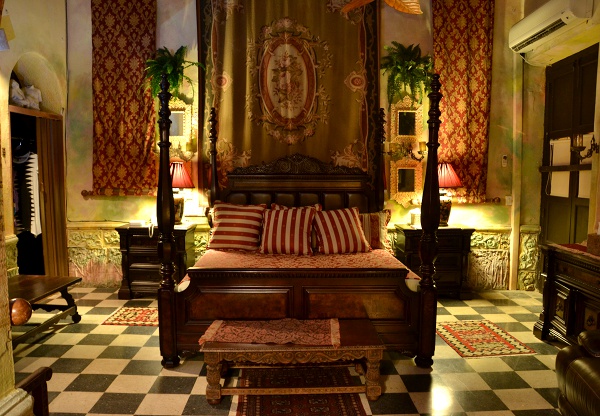 While the hotel’s grounds, location and amenities deserve acclaim, the rooms under its roof are equally fantastic.  We were invited to the San Sebastian Suite during our stay, the pearl of this 23,000 square foot boutique.  This suite comprises a large, classically-designed sitting room, a separate dining area and a magnificent bedroom with ceilings over 20 feet high.  Tapestries hang from the walls, rooms are separated by grand arches, and Jan D’Esopo’s art lines the perimeter.  TheCoolist’s Mike Payne and his new wife Rachel spent their nights in this suite, enjoying a honeymoon they’ll talk about for decades to come.  Even to scale back the hyperbole and to pass on the pretty words, the experience they had here was nothing short of remarkable. 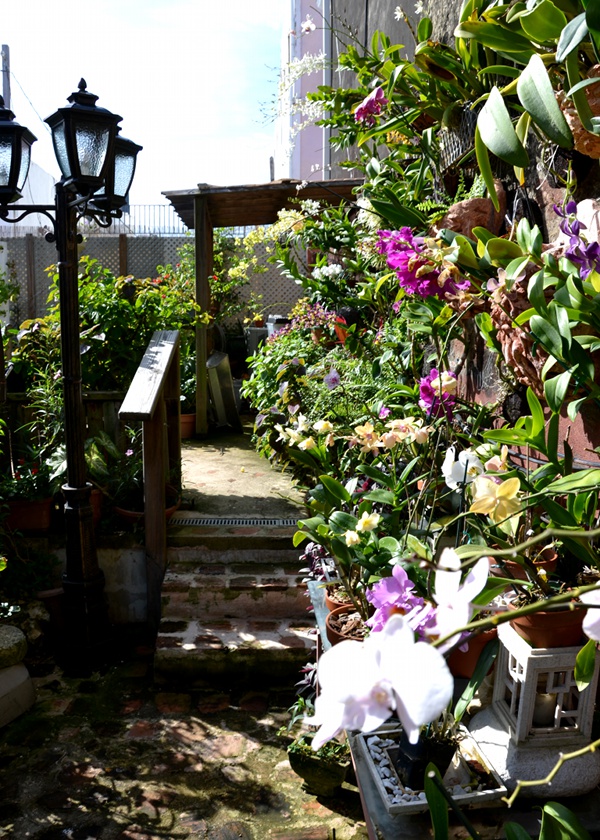 The open veranda of The Gallery Inn holds the wall of orchids above, as well as a vegetable garden with herbs, lettuces, tomatoes and more that find their way into the hotel’s menu.  The gallery features five aeroponic tower gardens and an aquaponic lettuce system filtered and fed by an aquarium of tilapia below.  This futuristic vegetable garden emphasizes the hotel’s focus on sustainable living, providing food for guests and an education for those curious about how the world of tomorrow will feed itself.  Manuco D’Eposo, husband and partner in art of owner Jan D’Eposo, is working with business and government interests in Puerto Rico to help transform their food economy to one of environmental and economic stability.  The Gallery Inn hosts frequent workshops for those who wish to explore and invest in high tech, hydroponic food production systems that will empower a new generation of agri-entrepreneurs. 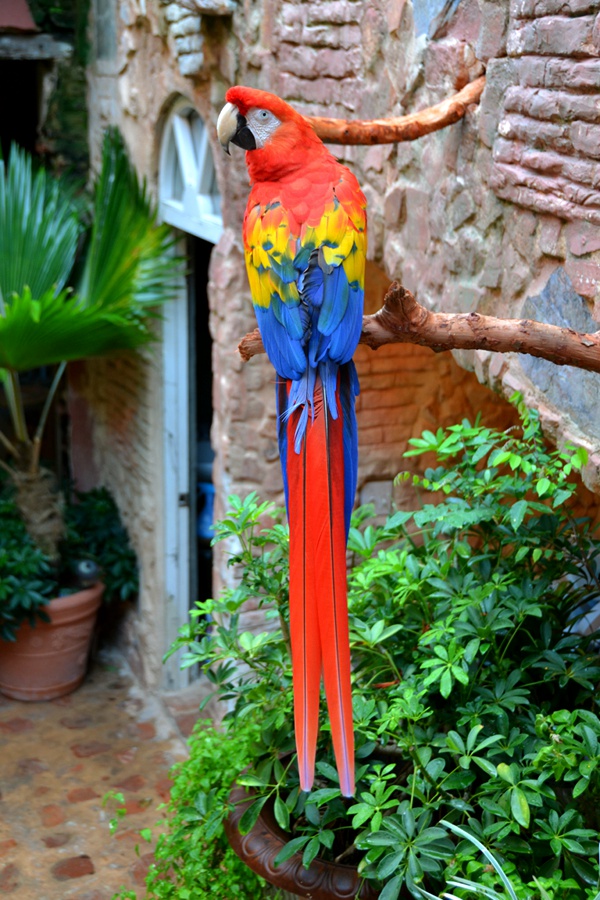 Beyond the food and the art, The Gallery Inn is home to a native element that guests can experience firsthand.  Five exotic birds live in the gallery year-round, one of which even has a titled job at the hotel.  Campeche, a Moluccan Cockatoo (shown in the gallery below) has his own business cards and an unparalleled level of access to the hotel grounds.  He welcomes guests with an “hola” and the perfect pronunciation of his name, then a few tricks and a request for a ride on your hand.  While checking in, Campeche sat on our editor’s shoulder and peeked into his backpack for a treat, a trick or a glass of wine.  During dinner on the gallery’s veranda, Campeche is often seen (or heard) drinking a cup of red wine held in his beak from his perch.  While that red, yellow and blue beauty above is not Campeche, this is one of many birds you will get to know during your stay. 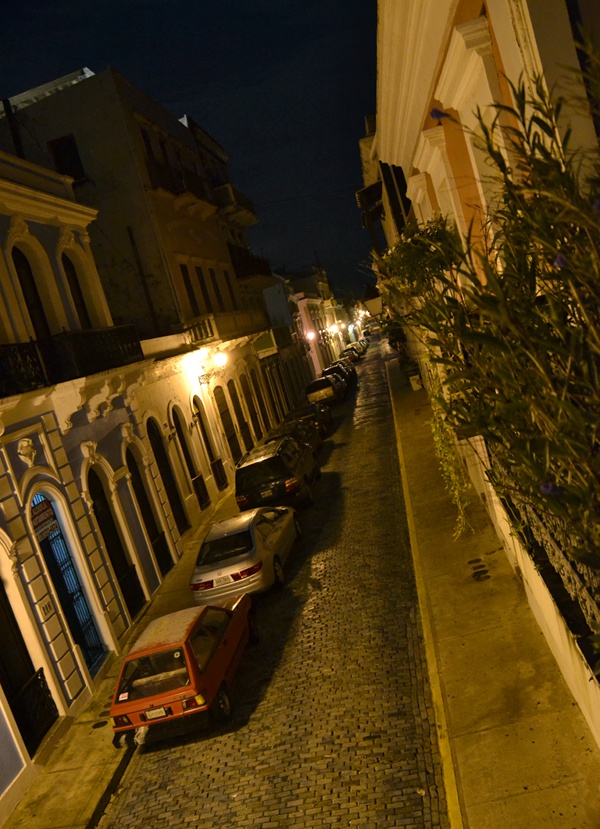 For the most part, Old San Juan is explored from a transient perspective– by cruise-bound tourists, by passing-through pleasure travelers and those who make this city a single dot amongst a larger excursion.  The Americanized resorts of Condado, Isla Verde and otherwise provide an experience that can be had elsewhere in the Caribbean.  If one truly wants to experience the culture, the beauty and the cuisine of a city like none other in the reach of the United States, Old San Juan is as authentic as it gets.  The Gallery Inn just happens to be its hospitable pearl, a hotel that is as much a destination as the historic city around it.  Jan D’Esopo, her husband Manuco, her Cockatoo Campeche and her staff have built an authentic retreat like none other, a hotel that makes Old San Juan the end of the journey, not a terminal to somewhere else.  We couldn’t possibly recommend it higher. 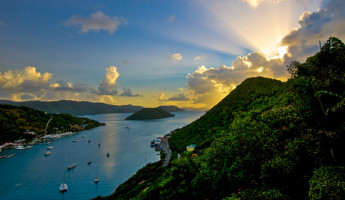