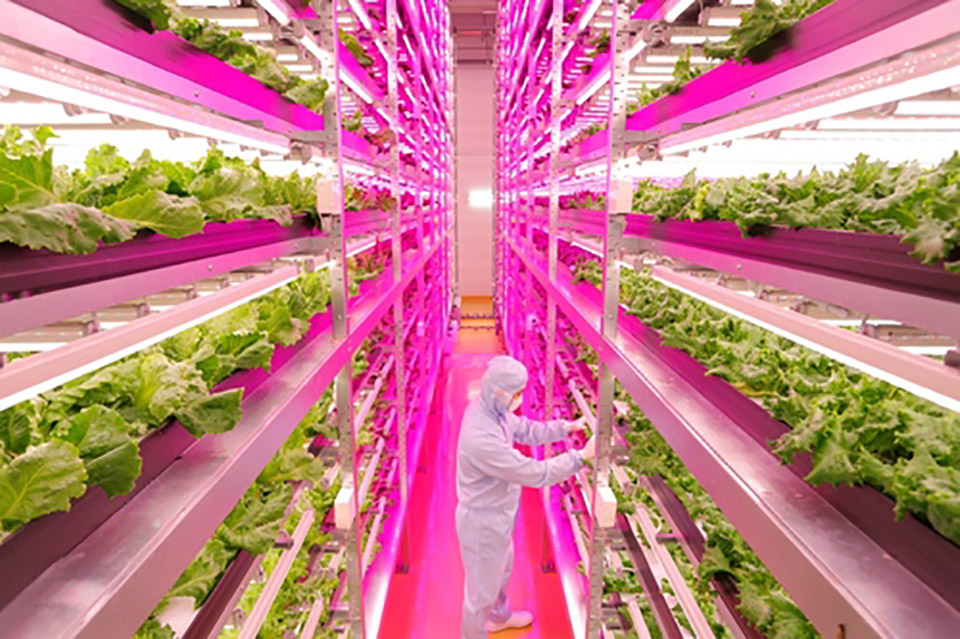 Although modern agriculture is no doubt leaps and bounds ahead of anything seen a few centuries ago, there’s still one tiny problem with it. Weather remains out of our control. With all of our high-tech farming toys, all it takes is a bad drought, a freak storm, or an outbreak of particularly resilient vermin to destroy an entire harvest. It’s happened before in our long history, and modern farming equipment – while it’s done a great deal to mitigate the problem – hasn’t removed it entirely. Now, one Japanese plant physiologist claims he’s found a solution to the weather problem – and possibly world hunger, as well. He’s opened the world’s largest indoor farm.

Working out of a former Sony Corporation semiconductor factory in the earthquake-damaged Eastern Japan, Shigeharu Shimamura has created this massive farm;  he’s designed what basically amounts to a food factory.  Using eighteen cultivation racks – each one about 15 levels high – the farm is equipped with specialized LED fixtures developed by GE, which emit wavelengths optimal for plant growth. Factor in some powerful hydroponics and the ability to easily control temperature, humidity, and irrigation, and you’ve got an impressive feat of engineering.  It spans the size of an entire football field, making it the world’s largest indoor farm to date.

It gets better, too. The farm – which just opened this month – uses only 1% of the water required by outdoor fields, and cuts the amount of produce discarded from the 50% regularly tossed by traditional farms down to a paltry 10%.  Shimamura’s brainchild is already producing 10,000 heads of lettuce per day, and will very likely increase that number in the near future.

Get a few of these operational, and you’d be able to feed a city. Get enough of them up and running, and you might well be able to feed the world. That’s the idea, anyway – Shimamura’s company Mirai is already hard at work establishing “plant factories” in Hong Kong and the Far East of Russia.

“Finally,” says Shimamura, “we are about to start the real agricultural revolution.”