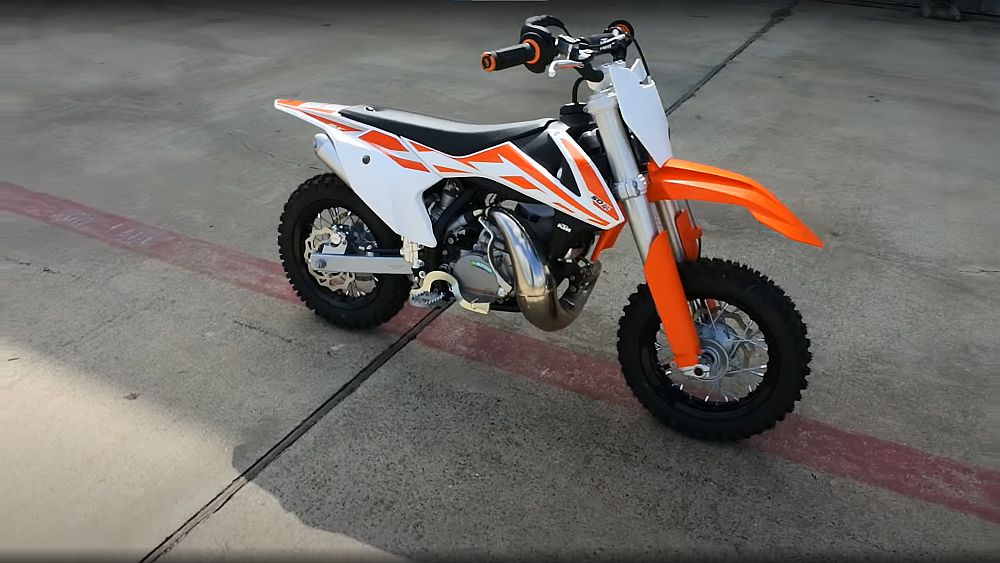 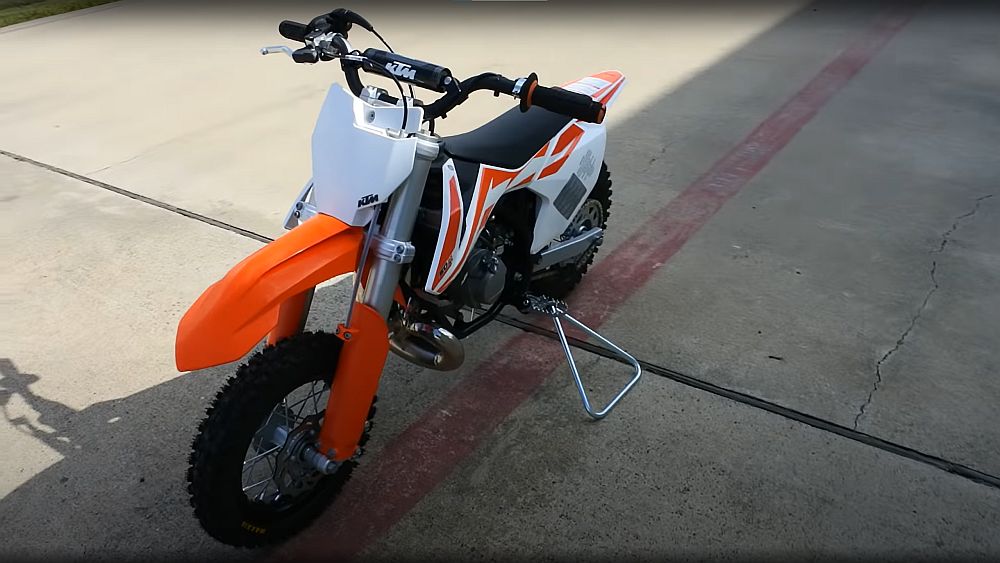 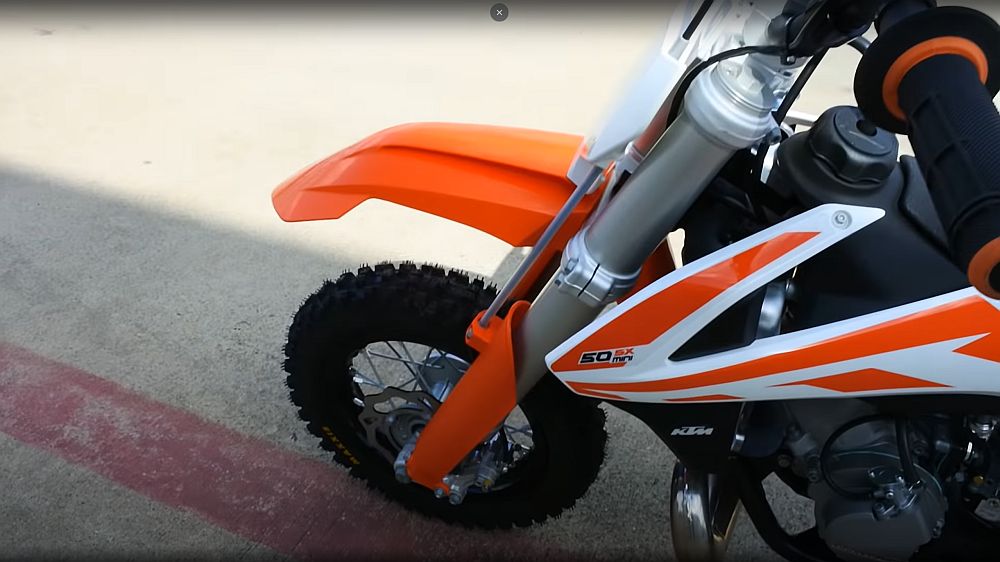 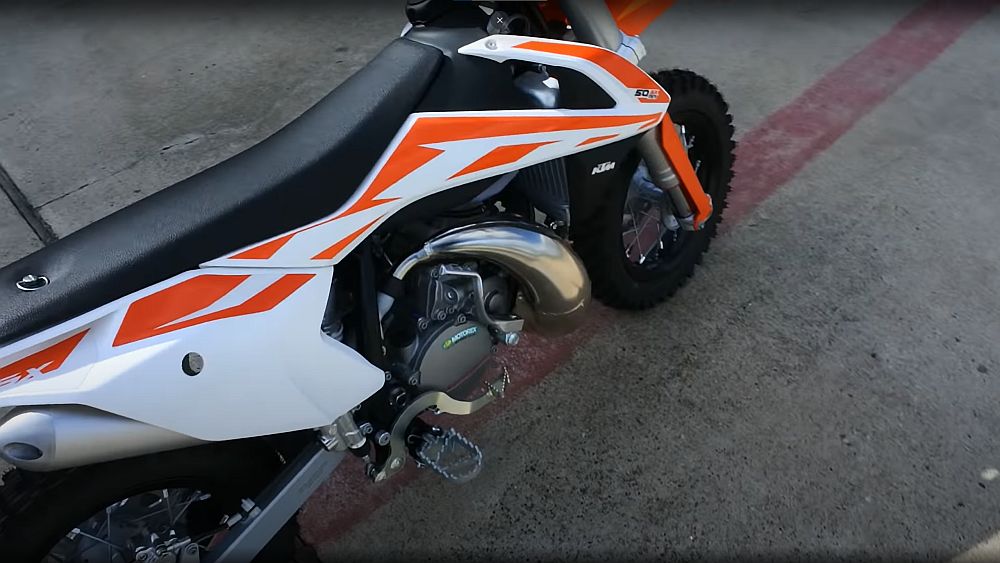 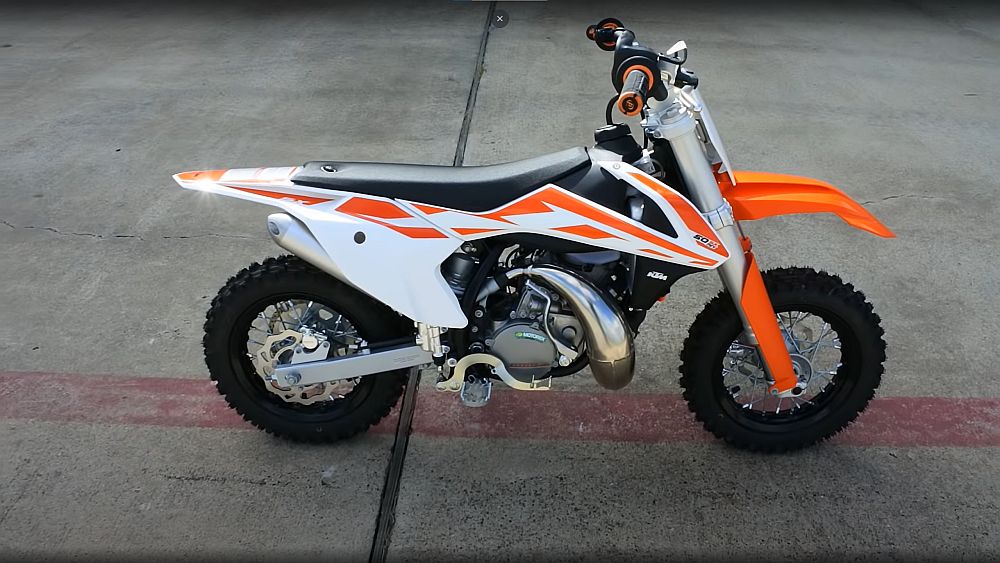 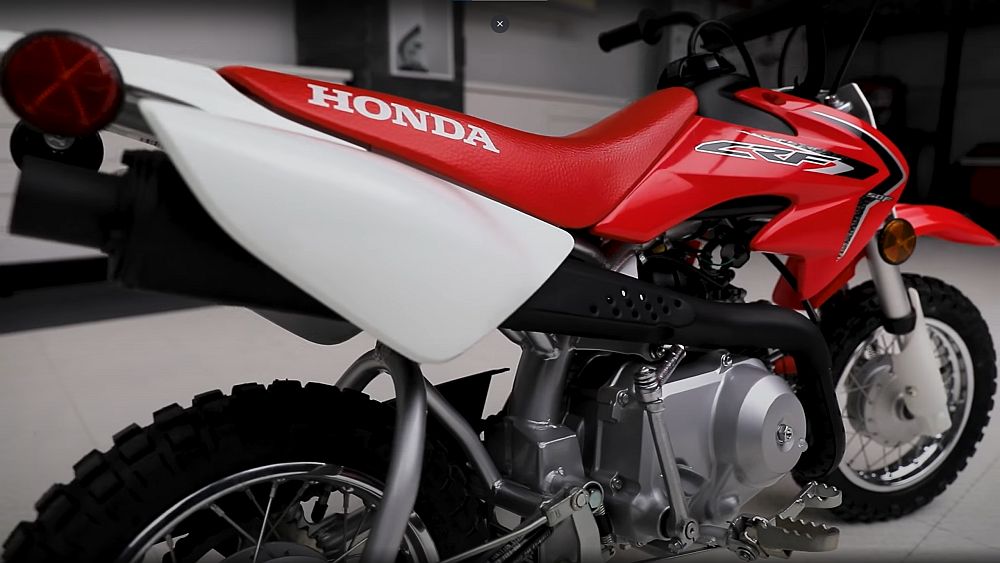 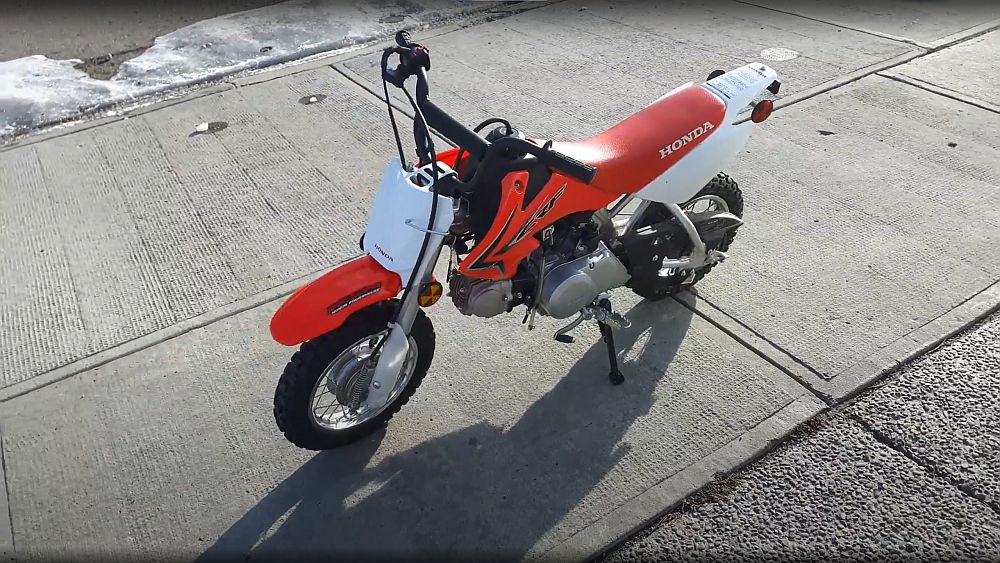 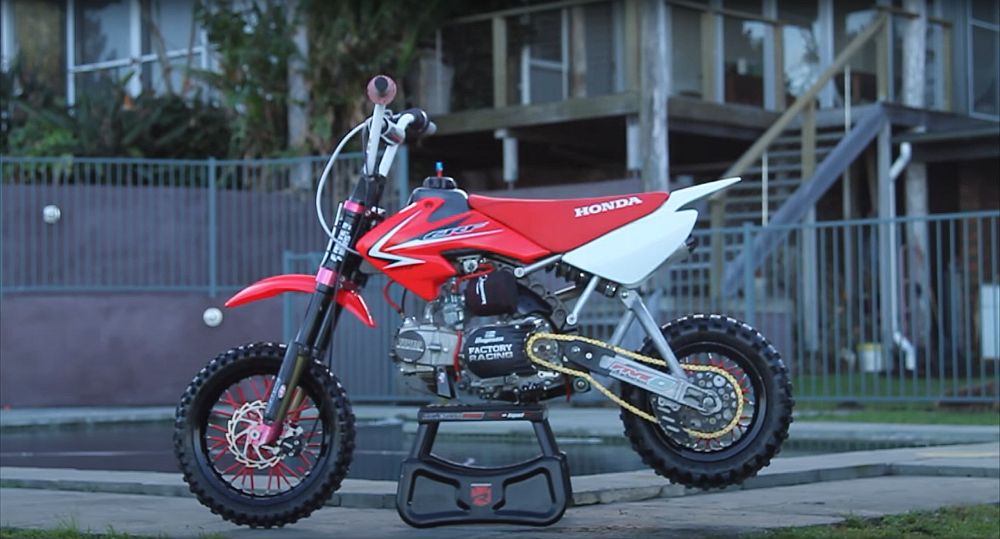 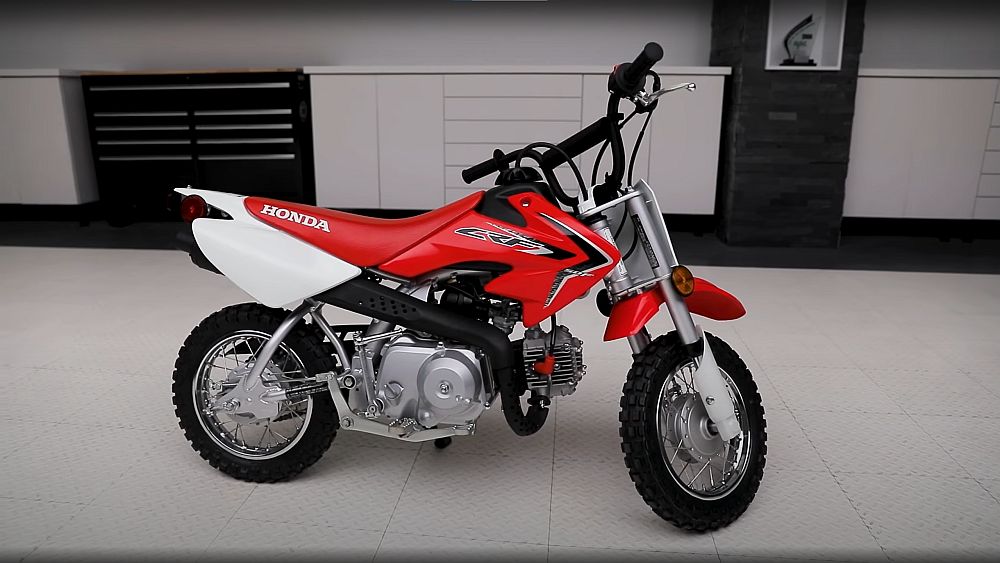 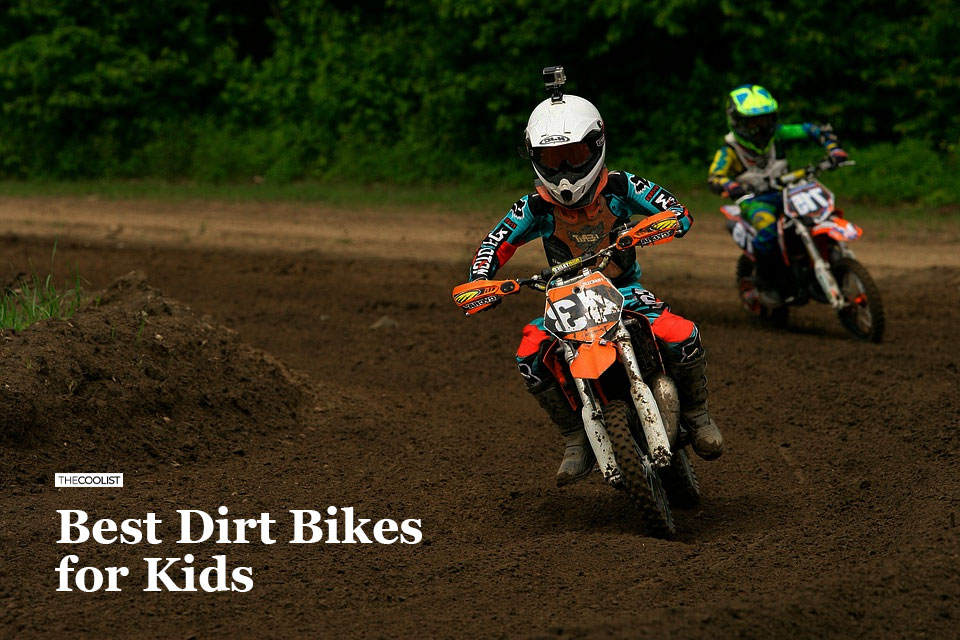 You’re rocking the best whips out of anybody you know, hole shots on race day, and moto wins (probably not), and you want your kid doing the same? I hear ya’.

I’ve been riding and racing dirt bikes for 20 years. So whether you’re wanting to trail ride with your kid, or get them into motocross racing, this guide to the coolest dirt bikes for kids has got you covered.

I want to start by saying, there are a ton of “copies” out there. Sure, you might be looking at a brand new dirt bike for your child at say $500, and be thinking that’s a good deal. That’s not going to cut it.

Motocross bikes aren’t cheap. Even a quality minibike for kids is going to be $1500+ from a leading brand like Honda.

But, these types of bikes WILL stand the test of time if maintained properly. A cheap Chinese copy, won’t…

I’ve suggested the two bikes I think are the best for beginners below. Looking at another brand? No problem, just make sure it’s on this list, and you won’t go far wrong…

So, they just hit their first jump on a bicycle?

The next step for your kid is to couple those skills with something that doesn’t require pedals…and the Honda CRF50 gets my vote.

Why? It’s small, agile, has a smooth power delivery, and is semi-automatic (no need to learn how to use a clutch at this stage).

The popularity of the Honda CRF50 knows no bounds. There are literally race series (for kids and adults), dedicated to the bike across the world. It’s also one of the most popular pit bikes for adults. And, that’s because it’s a top bike, from a leading brand.

But what makes it suitable as a first time dirt bike?

PLEASE don’t do that. And, PLEASE read carefully before you make your decision.

As we’ve already mentioned, the CRF50 pit bike is perfect for beginners. It’s light as anything (110lbs), and has a lower seat height than most other 50 minis; 21.6 inches.

Better still, being a 3 speed semi automatic, it’s just like riding a bike, your kid isn’t going to have any problems getting used to it.

I’ll admit, the bike’s suspension is limited in terms of performance (this is a starter bike after all).

You’ll get a basic telescopic front fork, with a single shock at the rear. But it’s fit for purpose , ideal for 4 year olds and up to 6 year olds to begin with.

However, within 6-12 months (especially for bigger and heavier riders, so 5 year olds and 6 years olds), you might want to think about upgrading the fork and rear shock springs. A Honda dealer will be able to advise on the correct weighted springs.

The smaller 50cc bikes tend to have a smoother power delivery than bigger bikes. When they progress to a 65cc or 85cc motocross bike, they’re going to have a shock; the powerband on those bikes can kick in aggressively.

Your kid won’t have a problem with that here…

Honda integrates a 49cc four stroke engine (known for excellent torque), with ultra-smooth power delivery. And, for the first few rides, you can even limit power by adjusting the throttle limit screw; no need for an accident.

Over the years, I’ve had plenty of Honda’s, and not just bikes. I’ve had a CR80 (my first bike), CRF250 (motocross racing), CR250 (enduro racing), and even a petrol lawnmower (well, for cutting grass)!

Compared to other motors I’ve used, Honda’s are just bullet proof, and I have no problem recommending them to anyone.

The CRF50 isn’t highly tuned (but can be). With minimal stress on the engine, it’s going to stand the test of time, and not cost a fortune to maintain.

Availability (and price) of Parts

It doesn’t matter how reliable or well maintained a dirt bike is, at some point you’re going to need parts.

Guess what? It’s going to break (A LOT) and when it does, you won’t be able to find parts.

What you will find though, is the manufacturer will happily take another $500 for a new bike (because that’s what you’re gonna’ need)!

You won’t have that problem with Honda.

Check Amazon, eBay, or leading minibike shops such as Fast 50s and BBR Motorsports for parts.

If you want to get your kid into dirt bikes, but want something ultra-smooth and easy to ride to begin with, the Honda CRF50 is the bike for them. It’s one of the best dirt bikes for kids that money can buy.

Don’t take my word for it. Drop a message on the Planet Minis forum, and see what their users say about the CRF50.

Feel like your kid has a knack for riding? Want them to jump straight into racing? Have a bigger budget than the $1600 M.S.R.P, and want something that’s more technologically advanced?

The KTM SX50 Mini is where your money should be at, and here’s why…

There’s a HUGE difference between a 50cc beginner dirt bike like the Honda CRF50, and a bike designed for racing, such as the KTM SX50 Mini.

Long story short, the same level of rider on a Honda CRF50, will go MUCH faster on a race bike such as the SX50 because it has:

I didn’t mean to shock you with the M.S.R.P of the CRF50. If you were shocked, look away now.

That’s what you need to pay to have a dirt bike for kids that’s going to win races; it’s as simple as that.

So, what does nearly $4,000 get you in terms of minibike racing?

Well, KTM lists this as a bike suitable for 4 years old through to 10 year olds. Personally, I was already on a CR80 by 8 (nowadays, they are 85s, so something like the YZ85).

I’d suggest this bike for riders 4 years old through to around 6 years old. By 7-10 years old, your kid should be progressing towards a 65cc or 85cc machine.

The KTM is light, weighing under 90lbs (much lighter than the CRF50), and that means your kid can hit berms hard. And the low seat height of around 22 inches means there’s a low center of gravity for increased stability. Better still, you’ll get ridiculous stopping power thanks to top quality KTM disc brakes.

You can check out the full specs of the brand new KTM SX50 on the KTM website here. But, we’ll cover the most important features below.

If you’ve been into motocross racing for a while, you’ll know many racers focus on exhaust and engine mods, not suspension.

Suspension is just as, if not more, important. There’s no point having a quick bike, if it can’t handle bumps, ruts, whoops and jumps.

The KTM SX50 dirt bike for kids includes top quality components, the equivalent of which, are used on adult race bikes like the SXF250 and SXF450.

From the box, you’ll get 35mm WP XACT upside down front forks. And, at the rear, you’re kid’s going to feel like they’re riding on water, with the WP XACT Monoshock.

Let’s put it like this, they’ll outgrow the bike, before the suspension needs upgrading; it’s top of the line stuff.

The CRF50 has a smooth 4 stroke 49cc engine. That’s not going to cut it on the race track. Not only will top speed be slow, they’ll get destroyed on the exit of turns.

Kids on a KTM SX50 Mini. The SX50 uses a much more powerful 2 stroke 49cc; there’s literally no comparison between the two.

What’s worth bearing in mind, is this is designed for racing. The much more aggressive power delivery will take some getting used to, but will put a HUGE grin on your kids face!

It wasn’t until around 2000 that KTMs became popular. Why? Before then, they simply fell apart. Luckily, the build quality has improved massively over the years.

I’ve had newer versions of the SX125 and EXC300, and I’ve been happy with both. They’re now classed as one of the best dirt bike brands for kids and adults alike.

However, this is a highly tuned race bike that will need maintenance (much more in comparison to the CRF50), so bear that in mind.

Availability (and price) of Parts

There are KTM stores globally stocking all manner of components…my nearest one is 10 minutes away. So, you’ll never struggle for parts.

As these are race parts, they’ll be more expensive than the CRF50, but that’s the cost of racing.

Find your nearest KTM dealer here, and they’ll be able to hook you up with whatever you need.

Who Needs The KTM SX50 Mini?

For fun and trail? Head for the CRF50.

For race wins, your kid needs the KTM SX50 Mini.

And, don’t trust my opinion. Ask a question on KTM Talk. These are KTM fanatics (potentially biased), so will be able to point you in the right direction.

Got a bike? Now you need to look for quality dirt bike gear.

It makes me cringe when I see kids on dirt bikes with little, no, or cheap protection.

Don’t scrimp and save when it comes to safety. When motocross bites, it bites hard, so you should be taking a no expense spared approach to safety gear.

There’s a great resource covering reputable dirtbike gear brands here. I’ve used almost all the brands on that list, and you won’t go wrong with any of them.

You’ve got one of the best dirt bikes for your kid, and all the gear they need, so that’s a wrap.

Time to get out on the track and start stacking up some big grins, and moto wins!