Swedish Style Abounds in “Molle by the Sea” by Elding Oscarson

The most striking feature of the Molle by the Sea house is its angular shape, designed to challenge the convention that all rooms should be facing towards that same view. Its irregular shape also helps to carve out different external spaces as opposed to a simple front and back garden. As described by the architects:  “Not immediately perceptible, the graphic form of the plan results in a building volume that rather reads as a fragmentized whole – from some angles striking, from other angles neat.”

Undivided panes of low iron glass envelop the ground floor, with some of them stretching for as far as 7 meters in places. Sliding doors provide access to the outside, while stone walls help to create boundaries and frame the interior space. Inspired by “Villa Italienborg,” one of Mölle’s most famous houses, the upper floor has been wrapped in oversized saw finish douglas planks. This contrast between glass and wood is part of what gives Molle by the Sea its distinctive flavor. [photography by Åke E:son Lindman]

Molle by the Sea by Elding Oscarson | Gallery 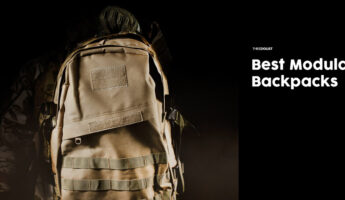 The 7 Best Modular Backpacks For Packing Up in Style