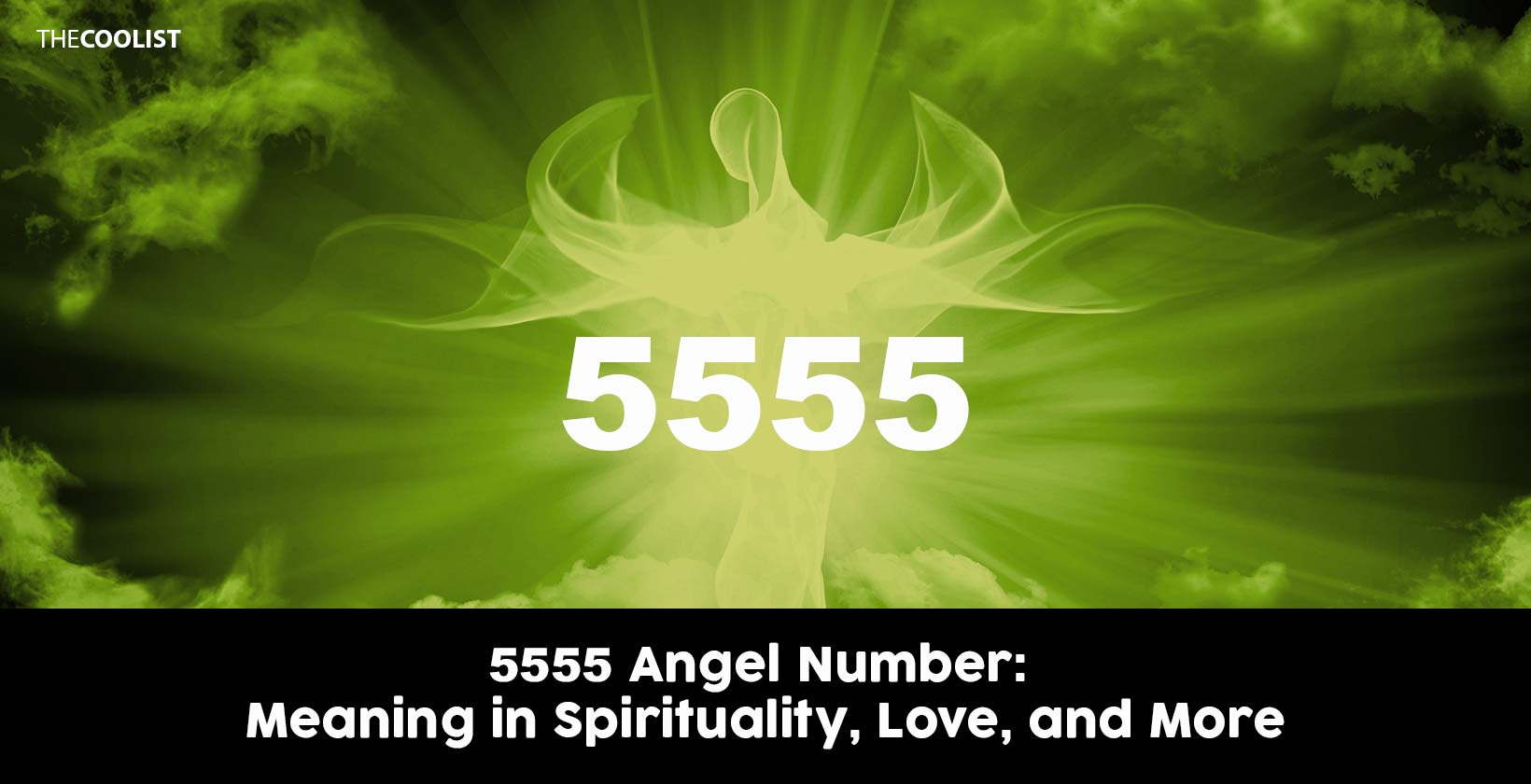 Angel number 5555 is a message from your guardian angels that an upcoming change will bring clarity to your life.

If you keep seeing angel number 5555 on receipts, in telephone numbers, or on signposts, it isn’t just a coincidence. Angel numbers like 5555 communicate secret meanings from the Divine that we should never ignore or disregard.

In this article, you will learn what the 5555 angel number means, including its significance in numerology, love, pregnancy, and other life aspects. If you’ve constantly been seeing the 5555 number sequence in your day-to-day life, keep on reading to truly understand the hidden messages your angels are sending you.

What is the meaning of the 5555 angel number?

The meaning of angel number 5555 is threefold. First, 5555 means that you’ll soon experience a big change in your life. The change you will undergo after witnessing angel number 5555 will bring you great clarity and a newfound sense of self. Second, the meaning of 5555 is that it’s time to branch out and push yourself towards new adventures and your deepest desires will materialize quickly. Change can often be scary, but it is important that you let go of your fears and embrace everything that will soon be coming your way. Remember that your angels are always with you, and they will continue to guide you in the right direction. Third, angel number 5555 is the angels’ reminder that you’re worthy, creative, and resilient. No matter what obstacles you’ll face, you will soldier on and embrace each adventure as it comes.

See also: Discover how angel number 1111 can help in manifestation

Why are you seeing 5555 everywhere?

You are seeing 5555 everywhere for five possible reasons, which are listed below.

Regardless of the personal meaning 5555 conveys for you, it’s important to remember that you shouldn’t take angel numbers as a guarantee of Divine intervention — your life is still very much in your hands. Yes, angel number 5555 is informing you that a big change will be happening in your life, but that doesn’t mean you should make drastic and possibly dangerous choices. For example, if you’ve recently been suffering from an illness, you could take angel number 5555 as a sign that you will soon start feeling better. However, seeing the angel number doesn’t mean you should stop taking your medications.

What is the spiritual meaning of 5555?

The spiritual meaning of 555 is thateverything you’ve wished for will soon become a reality in both the material and the spiritual world.So, if you’re seeing 5555 repeatedly, get ready — you’re about to experience self-discovery, self-growth, and receive plenty of spiritual guidance from the Divine.

When you see angel number 5555, you should try to see the world in a different light, as not everything is what it seems. You should also explore the depths of your spiritual life through practices such as meditation. Meditation is a great tool that puts you in tune with yourself and the spiritual world.

What does 5555 mean in numerology?

In numerology, 5555 means change. The number “5” on its own stands for change, spiritual journeys, and transformations. And, as the number 5 is multiplied 4 times, it makes the numerological meaning even more powerful.Furthermore, if you were to see an additional five on the end of angel number 5555, the message would be even stronger.

What is the 5555 angel number meaning for love?

For love, the 5555 angel number meaning is all about shaking the status quo, although this meaning differs slightly depending on your relationship status. Below, you will learn the different meanings of 5555 if you’re in a relationship or single.

Meaning of 5555 if you’re in a relationship

If you’re in a relationship,5555 means two things. First, 5555 means that it’s time to reassess your romantic life and incorporate some new adventures into it. You should let the love between you and your partner flow freely while also remembering that you need to love yourself as well. Second, angel number 5555 is a mirror master number anda sign that you and your partner are highly compatible and mirror each other’s hopes and dreams. Being mirrors of each other, however, doesn’t mean that you need to be attached at the hip, as you both likely enjoy your alone time and working on yourselves.

Meaning of the 5555 angel number if you’re single

If you’re single, the 5555 angel number means two things. First, 5555 means that you need to find love for yourself before you can search for love externally. When you see the angel number 5555, take the time to understand and appreciate yourself on a deeper level. Once you’ve found your all-important inner love, only then will the right person come along and change the course of your life. Second, ifyou’ve had a tough time in love recently, 5555 reassures you that those toxic relationships are over. A true and loyal connection is coming, and you just need to be patient until it arrives.

The 5555 angel number is a sign that your twin flame may be closer than you think. Meeting your twin flame will change your world entirely, and as 5555 is a sign of change. When you see 5555, your angels are telling you to keep your eyes and heart open as you may have already met this person. As you reunite, remember that twin flames are a mirror image of ourselves and 5555 is a mirror master number. The energy you and your twin flame will share will be like no other and the relationship will be joyous, passionate, and powerful.

If you’ve met your twin flame already, 5555 meaning is that of the strength of your connection and how well-suited you are for one another.

What does the 5555 angel number mean for pregnancy?

For pregnancy, the 555 angel number means that you may conceive soon — especially if you’ve been trying for a while.5555 is a sign of change and welcoming a new baby into the world is quite a major change. Seeing angel number 5555 is a message that what you’ve been praying for will soon happen, and you need to manifest your desires so your angels can bless you with good news.

On the other hand, if you’re feeling on the fence about pregnancy, 5555 could be a sign that you aren’t yet ready. In this case, slow down, consider your current circumstances, and see if a baby would be a positive next step for you now.

Yes, 5555 is a good angel number for money. By showing you 5555, your angels want you to know that you’re on the right track and new financial opportunities will soon enter your life. Keep doing what you’re doing, and your angels will soon reward you for all your hard work.

However, 5555 is also a symbol of change, so it’s important that you set aside some finances to cover unexpected expenses. If you want to have money for a rainy day, it’s a good idea to start saving.

5555 has no specific biblical meaning, as this number is not mentioned in the Bible. That said, the number 5 is mentioned 318 times.One of the most significant examples of number 5 in the Bible is the Ten Commandments, which are split into two. As the commandments are important principles, the fact that they come in two sets of 5 means the number 5 is equally as important.

Does 5555 mean anything in Hebrew?

Yes, 5555 means something significant in Hebrew — 5555 refers to Sela-hammahlekoth, the great gorge which lies between Hachilah and Maon, southeast of Hebron. Sela-hammahlekoth was the scene where David and Saul conversed on opposing cliffs with a deep chasm in between.

What is angel number 5555’s meaning for manifestation?

The 5555 angel number meaning for manifestation is that you need to be hyper-aware of your thoughts and what you’re manifesting in this time. 5555 is a sign that big changes are coming, and these changes aren’t guaranteed to be good or bad.If you’re manifesting positive things after seeing angel number 5555, you will soon receive them. If you think negative thoughts, on the other hand, then you’ll receive negative manifestations. So, if you’re seeing 5555 repeatedly while manifesting, remember the Law of Attraction and how thinking good thoughts will result in good manifestations.

5555 angel number is a positive message that you’ll soon experience change, new opportunities, and clarity of mind. You need to take this time to remember that your angels are backing you through all of your endeavors, and if you ever need any guidance, you can always ask them for help.

As we finish up with angel number 5555, we’d love to know your thoughts. Have you ever seen the angel number? What happened in your life after your angels had sent it to you? Let us know in the comment section down below!

Further reading about other angel numbers