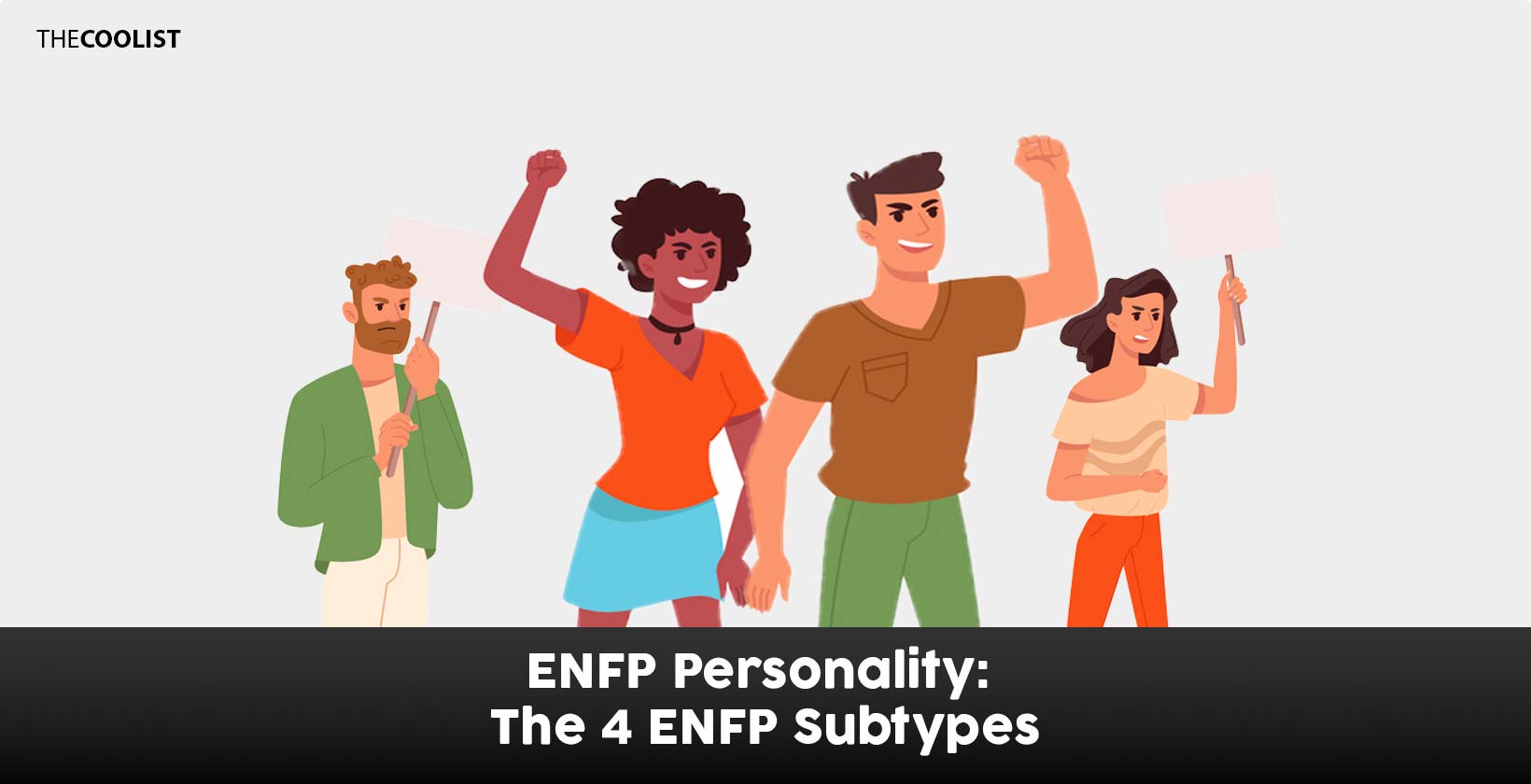 However, every Champion has unique motivations and beliefs which cannot be fully described by the MBTI alone. Nevertheless, it is possible to group different types of ENFPs into four subtypes based on motivations, behaviors, fears, desires, and thinking patterns.

The four ENFP subtypes are as follows.

The Red ENFP subtype is studious, private, inquisitive, and book-smart. Red ENFPs notably have a more introverted attitude than other ENFP subtypes. Reds maintain rich inner lives alongside the Champion’s typically outgoing disposition. Red ENFPs prefer to focus on the future, while most ENFPs live in the moment. Red ENFPs also behave in a self-persevering manner, utilizing their investigative thinking to plan out their lives and master tasks. Red ENFPs fear being unskilled and desire to immerse themselves in knowledge. Red ENFPs may develop the Champion’s rebellious streak as they learn how to improvise and embrace life’s unpredictability. A famous example of a Red ENFP is Dr. Seuss, an American children’s author. Dr. Seuss (born Theodor Seuss Geisel) was a private man who disliked public appearances yet mastered the art of storytelling to inspire millions of children.

The Blue ENFP subtype is altruistic, orderly, disciplined, and fixated on perfection. The Champion’s empathetic nature compels Blue ENFPs to listen to their morals, help loved ones, and respect rules. Blue ENFPs are also generally less spontaneous than other ENFP subtypes. Blue Champions have an orderly attitude and believe there’s a right and wrong way to do everything. Blue ENFPs are academic, whereas most ENFPs struggle in school. Additionally, Blue ENFPs fear failure and desire acceptance from others. An altruistic way of thinking compels Blue ENFPs to make up for what they feel others lack. One example of a Blue ENFP is Fidel Castro, the charismatic former president of Cuba whose political beliefs inspired the Cuban Revolution.

The Yellow ENFP subtype is vigilant, skeptical, and self-sufficient. Yellow ENFPs are as extroverted and empathetic as other ENFP subtypes, but negative life experiences have led Yellow ENFPs to fear attachment and vulnerability. Yellow Champions behavior is characterized by vigilance, curiosity, and skepticism. Yellow ENFPs skeptical way of thinking pushes them to ask questions, analyze problems, and explore the world around them. Yellow ENFPs desire friends and stability, which drives individuals of this subtype to embrace the more outgoing aspects of the Champion personality. American stand-up comedian George Carlin exemplifies the Yellow ENFP persona. Carlin famously used his charisma and skeptical sense of humor to critique politics, religion, and society.

The Green ENFP subtype is passive, open-minded, and sentimental. People with a Green ENFP personality believe they have no real control over life. Green Champions generally have a more passive attitude than other ENFP subtypes, taking life as it comes. Green ENFPs behave according to the Champion’s empathetic nature. Green ENFPs utilize their open-minded thinking to heal others and understand issues from multiple perspectives. Green ENFPs sometimes spend too much contemplating past trauma, leading to a fear of loss and a desire for inner peace. A famous example of a Green ENFP is John Lennon, co-founder of the Beatles. Lennon utilized his platform as a musician to protest war and advocate for peace.

What is an ENFP Personality Type?

What is an ENFP on the Enneagram?

Extroverted Thinking may look different for each ENFP subtype, but all utilize it to organize information logically and identify connections. Extroverted Thinking (Te) is the tertiary ENFP cognitive function. It develops as individuals mature, supporting the dominant (Extroverted Intuition) and auxiliary (Introverted Feeling) functions. Differences in usage may arise because the ENFP subtypes all have unique personal motivations and characteristics. However, Extroverted Thinking plays the same role in every ENFP subtype. Its usage by ENFPs may manifest as thinking out loud, improving the efficiency of a procedure, or critiquing a system to form a logical but uniquely creative solution.

What do ENFP hate?

ENFPs hate small talk and being alone. The four ENFP subtypes hate different things, but we can identify mutual dislike based on shared characteristics of the Champion personality. ENFP subtypes hate small talk because they’re all outgoing extroverts who value invigorating debates over polite niceties. ENFP subtypes likewise hate being alone because they’re extroverted. Red, Blue, Yellow, and Green ENFPs draw energy from the external world. Therefore, spending too much alone is emotionally draining for all subtypes.

How does each subtype deal with other personality types?

Each ENFP subtype deals with other personality types differently. Individuals with an ENFP personality generally approach others with a high degree of empathy and sensitivity. All of the ENFP subtypes also tend to have great communication skills but differ in the following ways.

How do ENFP Subtypes deal with stress?

The ENFP subtypes deal with stress in four different ways. First, Red ENFPs cope with stress by behaving impulsively. They indulge in the spontaneity Champions are known for, leading Red ENFPs to focus less on the future and more on the present. Second, Blue ENFPs deal with stress through self-criticism. Blue ENFPs are otherwise orderly perfectionists, but if stressed, they will search for an escape and harshly judge what they perceive as personal failures. Third, Yellow ENFPs handle stress by ignoring the situation and focusing on tasks. Yellow ENFPs are usually self-sufficient, but stress causes them to overwork instead of facing difficult emotions. And fourth, Green ENFPs deal with stress by acting and thinking pessimistically. Stress erodes Green ENFPs’ typical passivity because their empathy is easily burdened by others’ emotions.

Champions generally deal with stress by retreating from difficult situations, but the ENFP subtypes cope differently because of their unique characteristics, fears, and desires.

Yes, ENFPs make good musicians. The four ENFP subtypes may gravitate towards different career paths. However, all Champions are attracted to creative fields such as music because they’re abstract thinkers. ENFPS enjoy coming up with unique ideas, learning about the arts, and indulging in creative hobbies like music. Additionally, musicians express themselves and connect with others through their art. The ENFP subtypes are attracted to these qualities because they’re empathetic souls who desire connection and attention.

Is ENFP a rare personality?

No, ENFP is not a rare personality. Around 8.2% of the U.S. population are ENFPs, making it a common personality type. There are no conclusive studies on the commonality of the four ENFP subtypes.