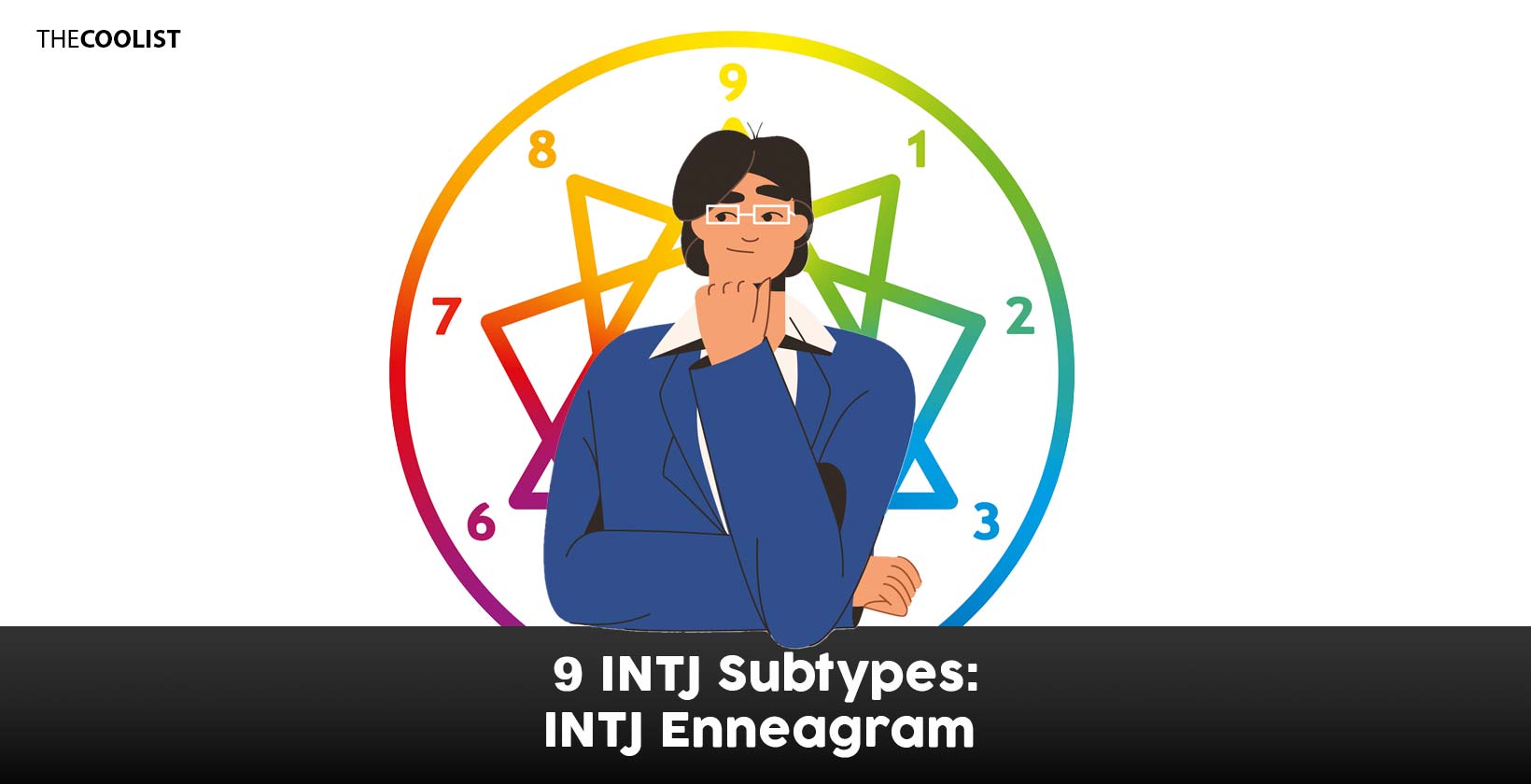 Nine INTJ subtypes form the INTJ Enneagram, which offers a more nuanced understanding of The Mastermind personality archetype. Every Mastermind has the same fundamental Introverted, iNtuitive, Thinking, and Judging traits. However, each INTJ subtype has unique attitudes, fears, and desires. The INTJ Enneagram categorizes these individualized attributes through the Enneagram of Personality, a human psyche model with nine personality types (also referred to as archetypes or enneatypes).

The nine INTJ subtypes are as follows.

The Enneagram further divides personality types into subgroups known as Heart, Head, and Body Types according to their shared motivations. Each INTJ subtype and its subgroup are explored in detail below.

The INTJ Giver (Type 2) is kind, nurturing, and altruistic. The Giver’s behavior is largely characterized by the empathy of the Heart enneatype and emotional intelligence of the INTJ’s tertiary Introverted Feeling (Fi) function. INTJ Giver like to put others’ needs first and utilize their intuition to help those in need. INTJ Giver fear being unloved and unwanted, so they’re well-known for their overly courteous attitude and altruistic thinking. Giver personalities are always looking for logical solutions to others’ problems. INTJ Giver desire love and appreciation from others. A famous example of an INTJ Giver is Ruth Bader Ginsburg, the late Supreme Court Justice who advocated for gender equality.

INTJ Achievers (Type 3) are ambitious, shrewd, and determined. The Achiever sub-type is the third Heart enneatype, but they do not focus their emotions inward or prioritize others’ feelings. Instead, INTJ Achievers derive emotional value from how others perceive them. The INTJ’s inferior Se function pushes the Achiever subtype to plan for success, set high-reaching goals, and think strategically. INTJs with an Achiever enneatype have an action-oriented attitude and behave according to an ambitious life plan. INTJ Achievers desire validation and fear they’re worthless without achievements. A famous example of an INTJ Achiever is Augustus Caesar, a highly ambitious Roman emperor and military general.

The INTJ Skeptic (Type 6) is strategic, vigilant, dependable, and risk-averse. The INTJ Skeptic is (as the name implies) also the most skeptical of the INTJ subtypes, though they share other Head enneatypes’ preference for logical thinking. Skeptic’ behavior is generalized by hyper vigilance and self-perseverance. Skeptic INTJs prepare for the worst, regardless of the situation, and often crave an authority figure to guide them. Without anyone to rely on, Skeptics tend to develop a highly independent attitude. INTJ Skeptics consequently fear abandonment, their logical mindset sometimes clouded by anxiety. As a result, this INTJ subtype desires security and support. A famous historical example of the INTJ Skeptic is Hannibal Barca, a Carthaginian general whose strategic thinking repelled Roman forces during the Second Punic War.

The INTJ Challenger (Type 8) has an independent spirit and a bold attitude. Challengers are one of the Body enneatypes, demonstrating strong instincts and the most self-confidence of all the INTJ subtypes. High self-confidence drives INTJs to complete tasks and meet commitments as efficiently as possible. The INTJ Challenger’s fierce independence contributes to a deep fear of vulnerability and giving up control, and often become jaded as a result. People with this INTJ subtype are uncompromising towards authority and often feel they can only rely on themselves. Thus, INTJ Challengers desire complete control over their lives. James Cameron, a famous American director, exemplifies the INTJ Challenger due to his bold film projects and uncompromising directorial style.

The INTJ Peacemaker (Type 9) is calm, spiritual, agreeable, and modest. INTJ Peacemakers are one of the three Body enneatypes, meaning they often trust their instincts. The Peacemaker’s gentle instincts motivate INTJs to behave in a passive, overly-agreeable manner. INTJ Peacemakers fear loss and ostracism, desiring stability and harmony instead. INTJ Peacemakers are open-minded thinkers, who like to analyze topics from many different perspectives and respect conflicting beliefs. A famous example of an INTJ Peacemaker is Al Gore, the 45th US Vice President, and environmentalist who won the 2007 Nobel Peace Prize for his activism.

What is an INTJ personality type?

An INTJ personality type is one of the sixteen personality types under the Myers-Briggs Type Indicator (MBTI). Each MBTI personality type has a propensity for one of two psychological traits from a set of four dichotomies. The INTJ’s traits are Introversion, iNtuition, Thinking, and Judging. INTJs are highly analytical, innovative individuals due to this unique combination of characteristics, which fits The Mastermind archetype.

The MBTI focuses on psychological traits and cannot accurately account for an individual’s core motivations, fears, and desires, whereas the Enneagram does this more accurately. As a result, we can group the INTJ personality type into subtypes derived from the Enneagram.

What is the Enneagram of Personality?

The Enneagram of Personality is a typology that categorizes personality into nine archetypes (also called enneatypes). A nine-pointed geometric symbol represents Enneagram’s nine personality types. The Enneagram has three further subgroups. First, Heart Types who live according to their emotions. Second, Head Types who value logic. And third, Body Types who trust their instincts.

The INTJ Enneagram connects the INTJ’s psychological traits (Introverted, iNtuitive, Thinking, and Judging) with the core motivations of the nine Enneagram personalities. The result is nine INTJ subtypes, each defined by unique motivations, fears, and desires.

What is the best growth part of each INTJ subtype?

The best growth aspect of each INTJ subtype varies. Each of the nine Enneagram points is interconnected by two lines. These lines represent the traits enneatypes will develop during periods of growth or stress. INTJs gain traits that highlight the way human personalities fluctuate, taking on healthy (growth) and unhealthy (stress) qualities depending on life circumstances. INTJs do not develop a new personality as a result of stress or growth.

The list below details the best growth parts of each of the nine INTJ Enneagram subtypes.

How do INTJ Subtypes deal with their fears?

The INTJ subtypes deal with their fears in the following ways.