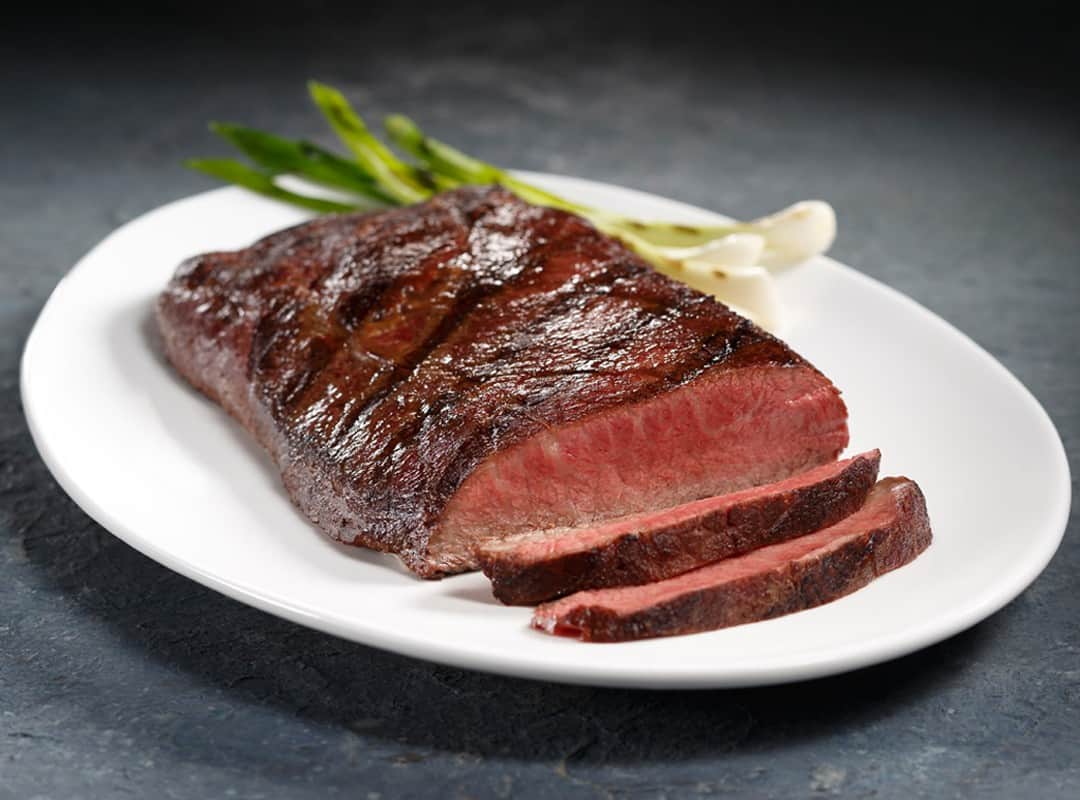 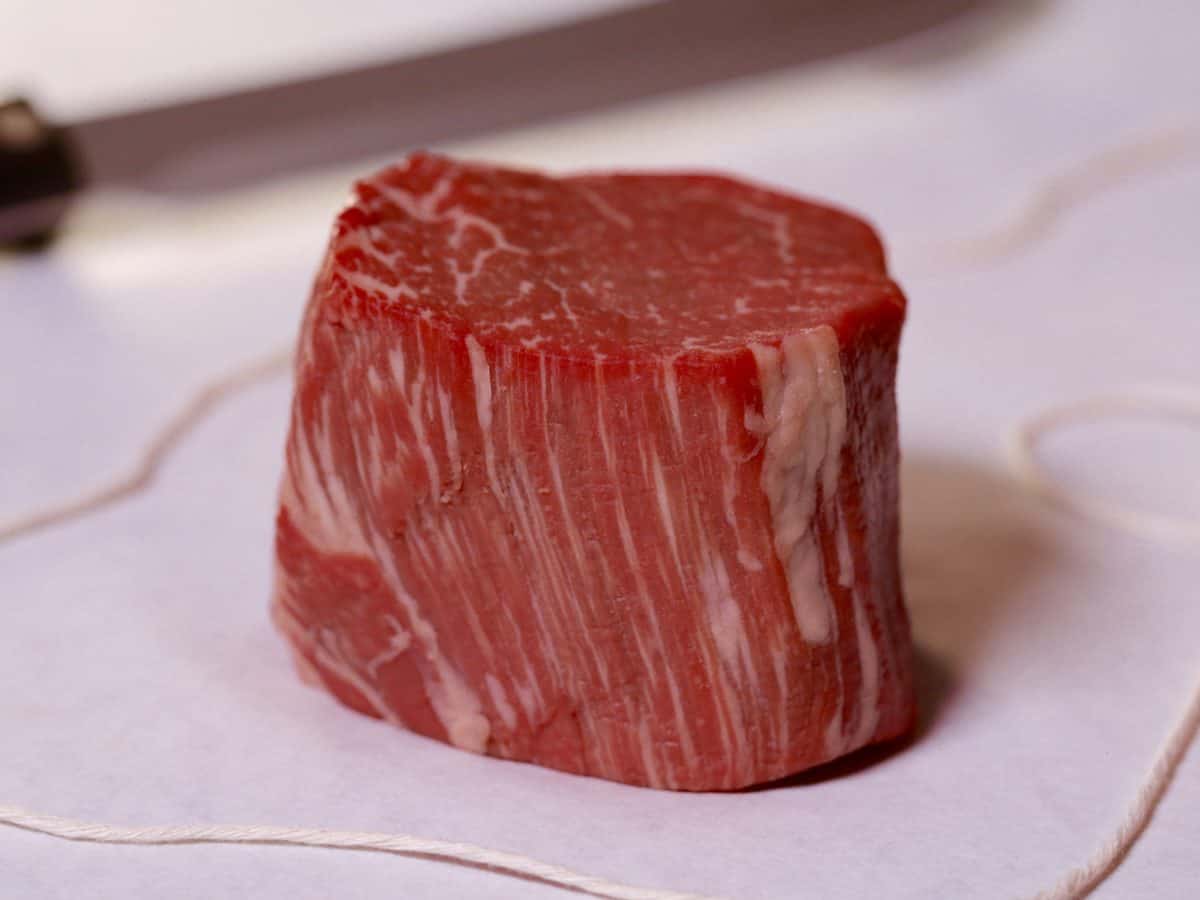 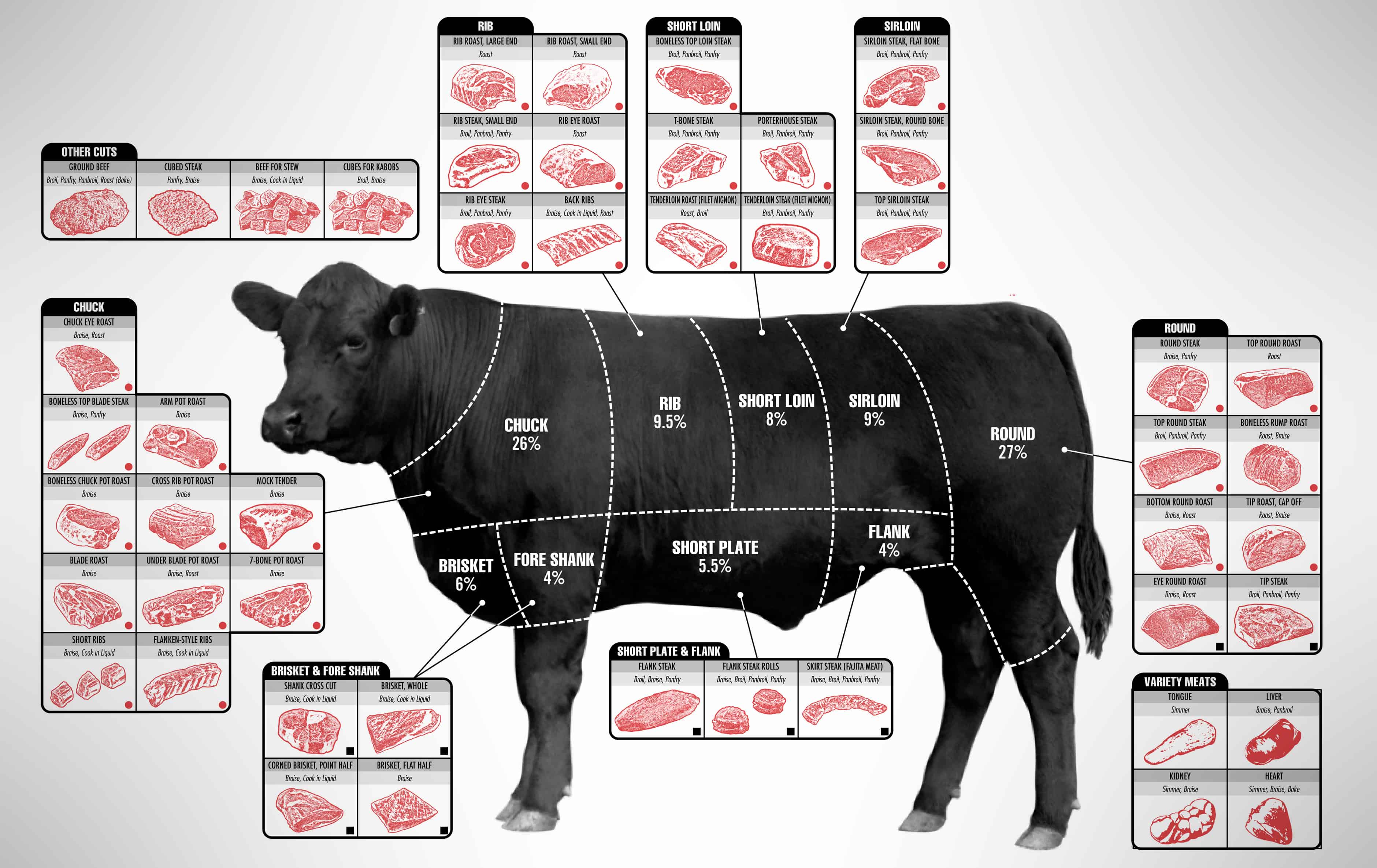 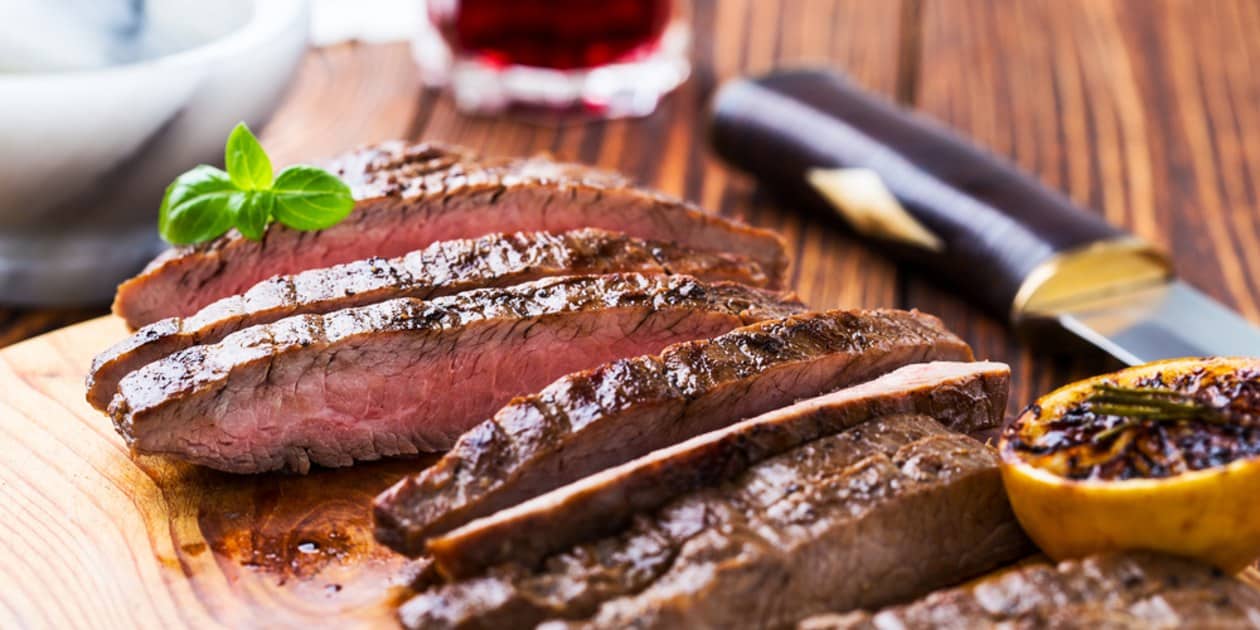 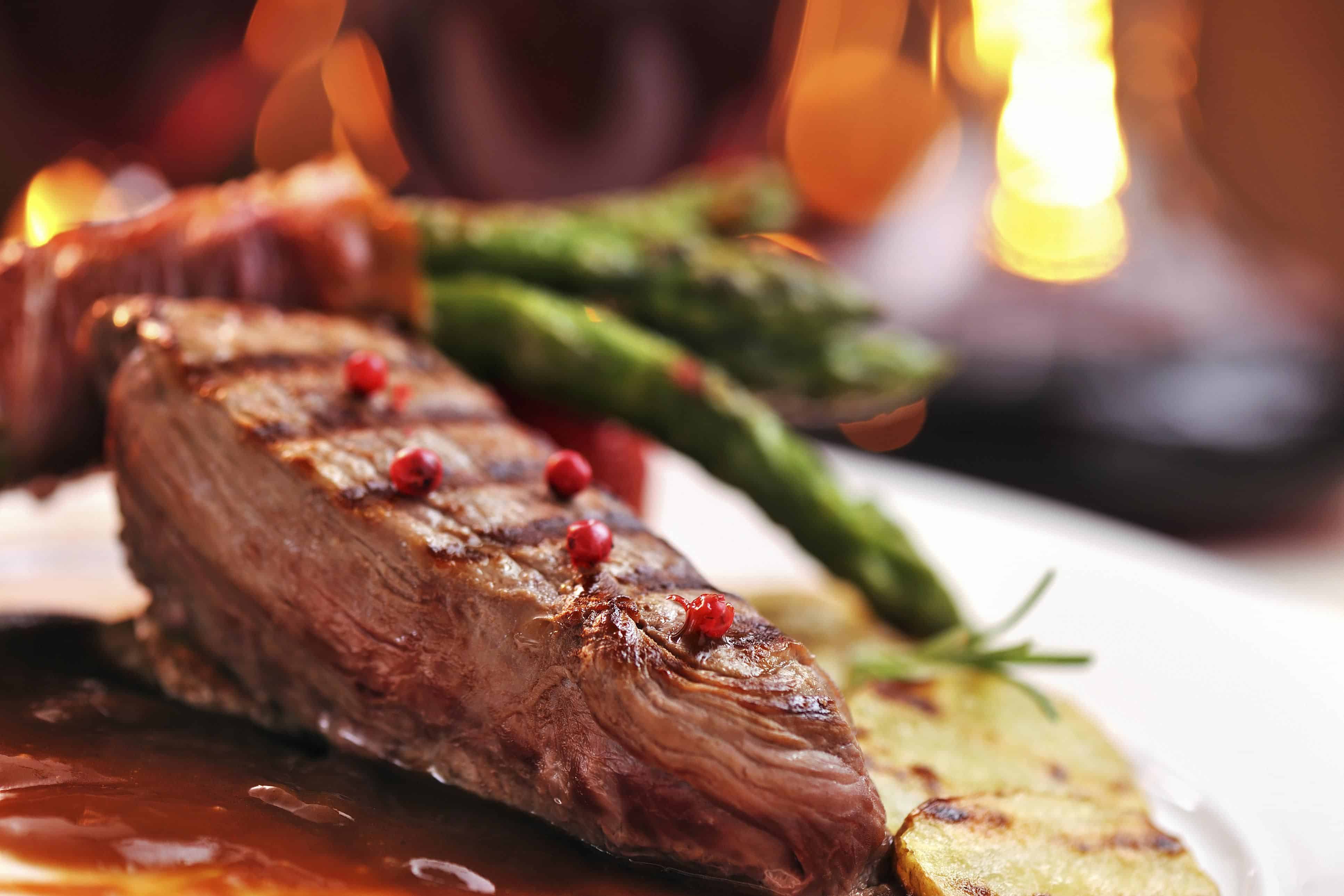 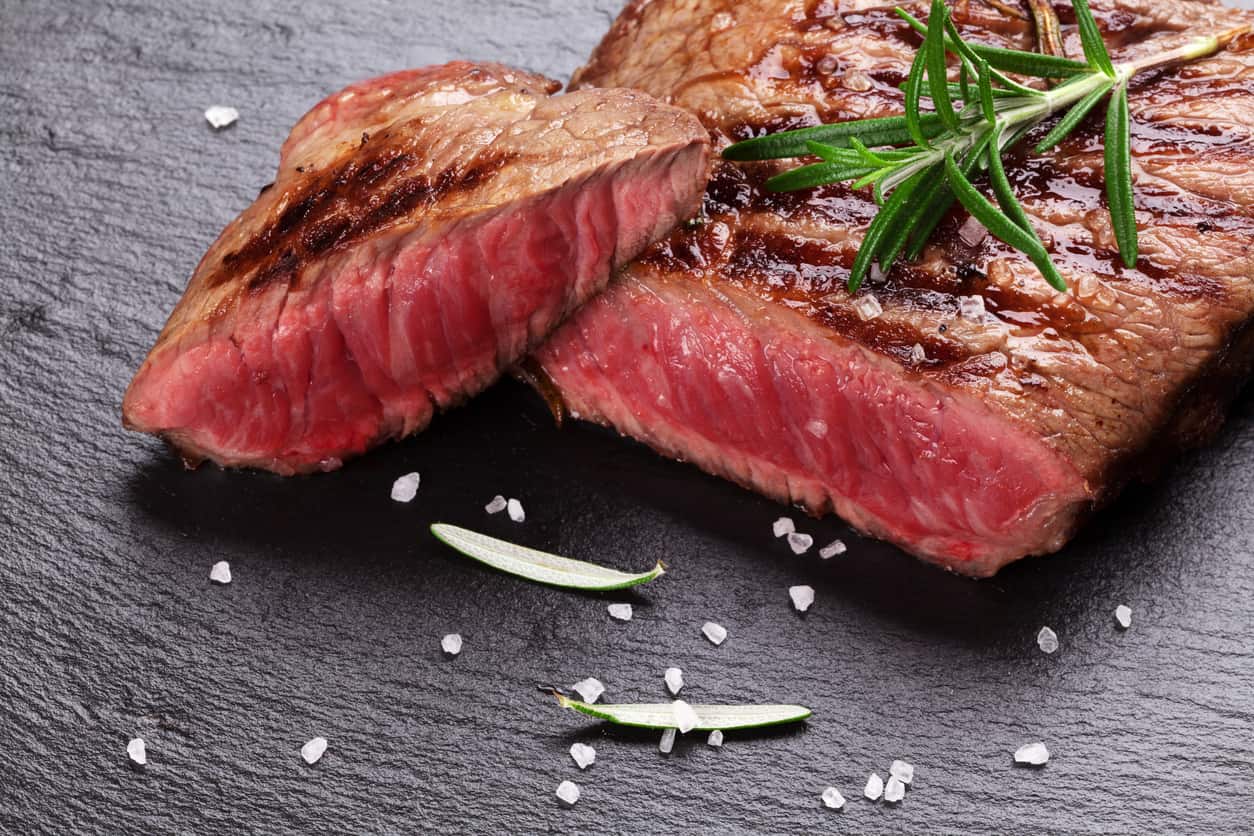 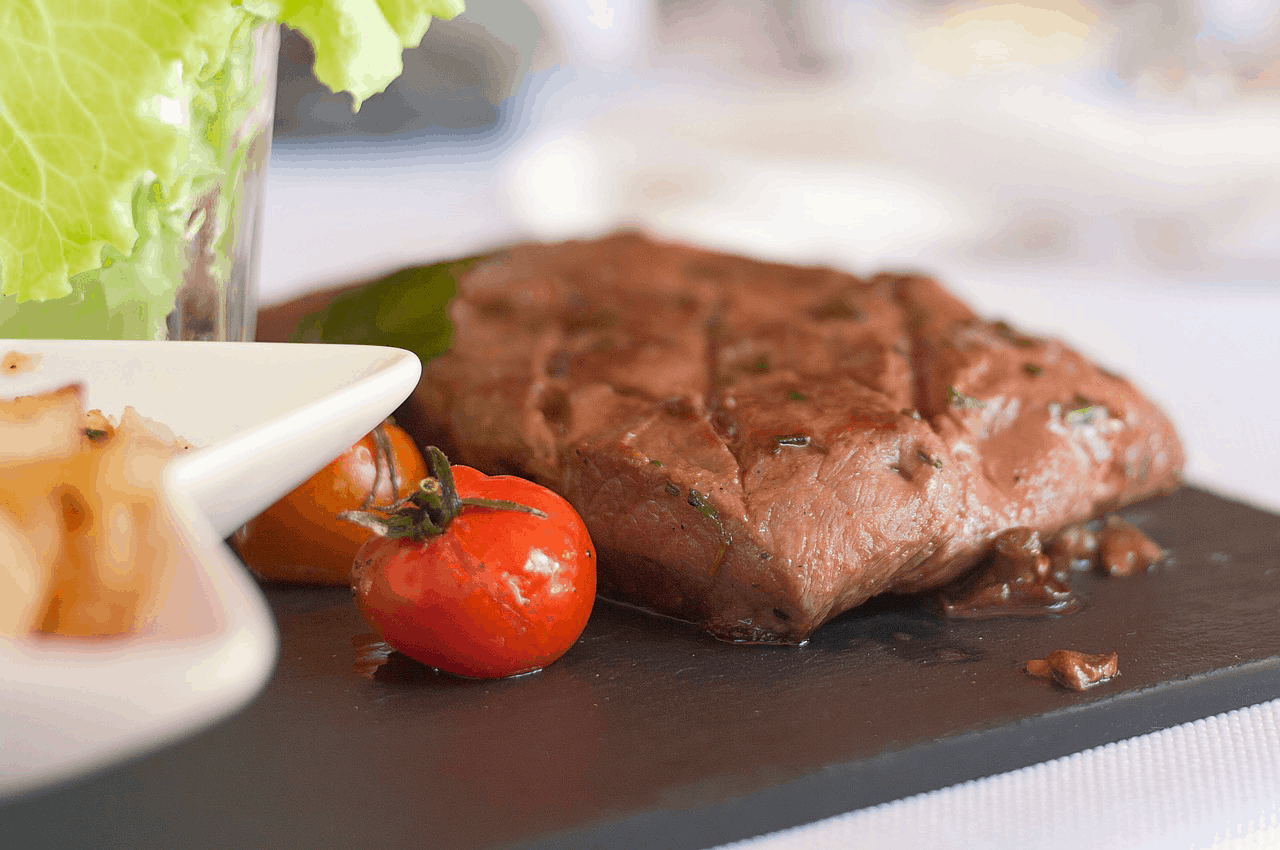 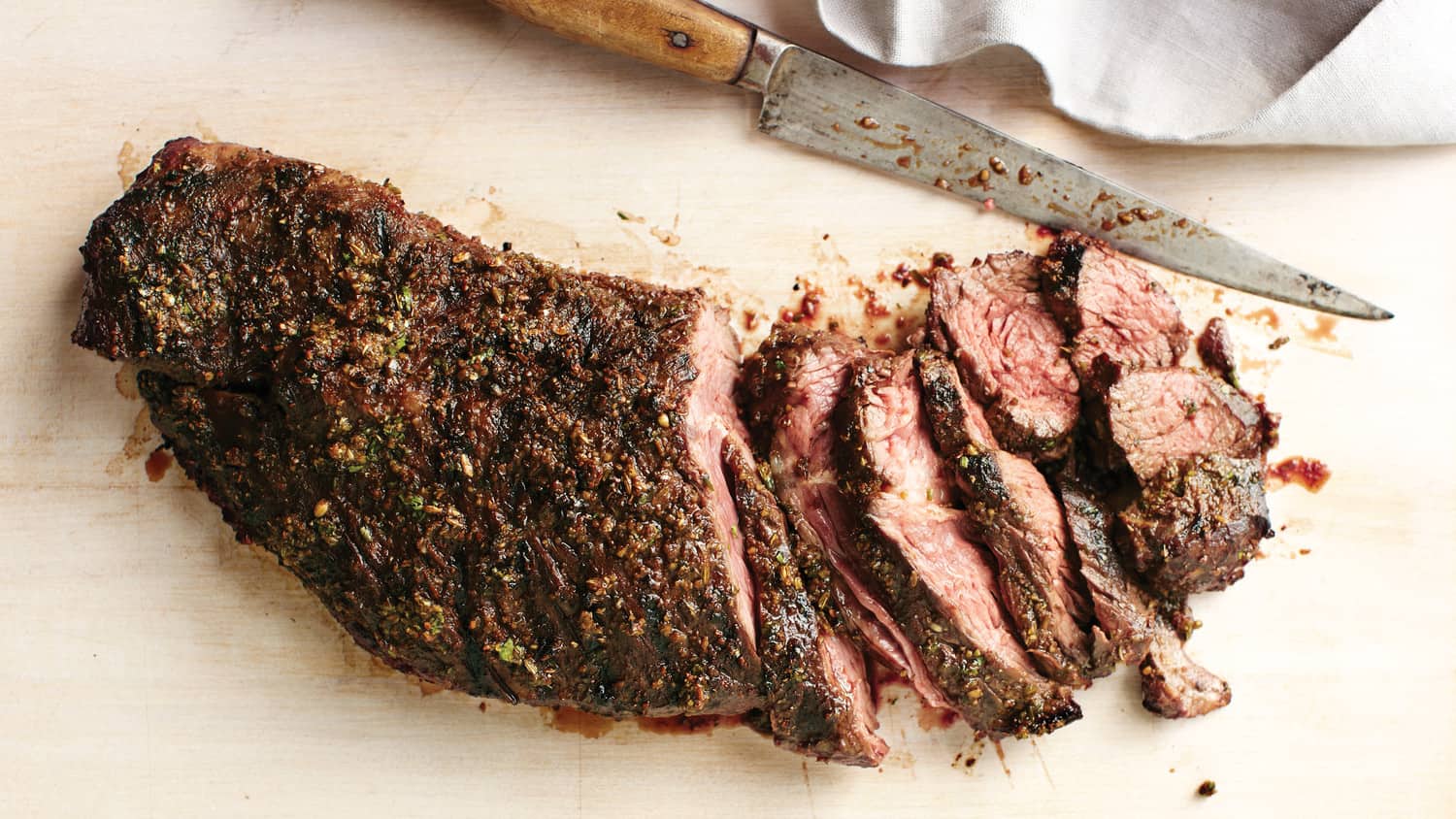 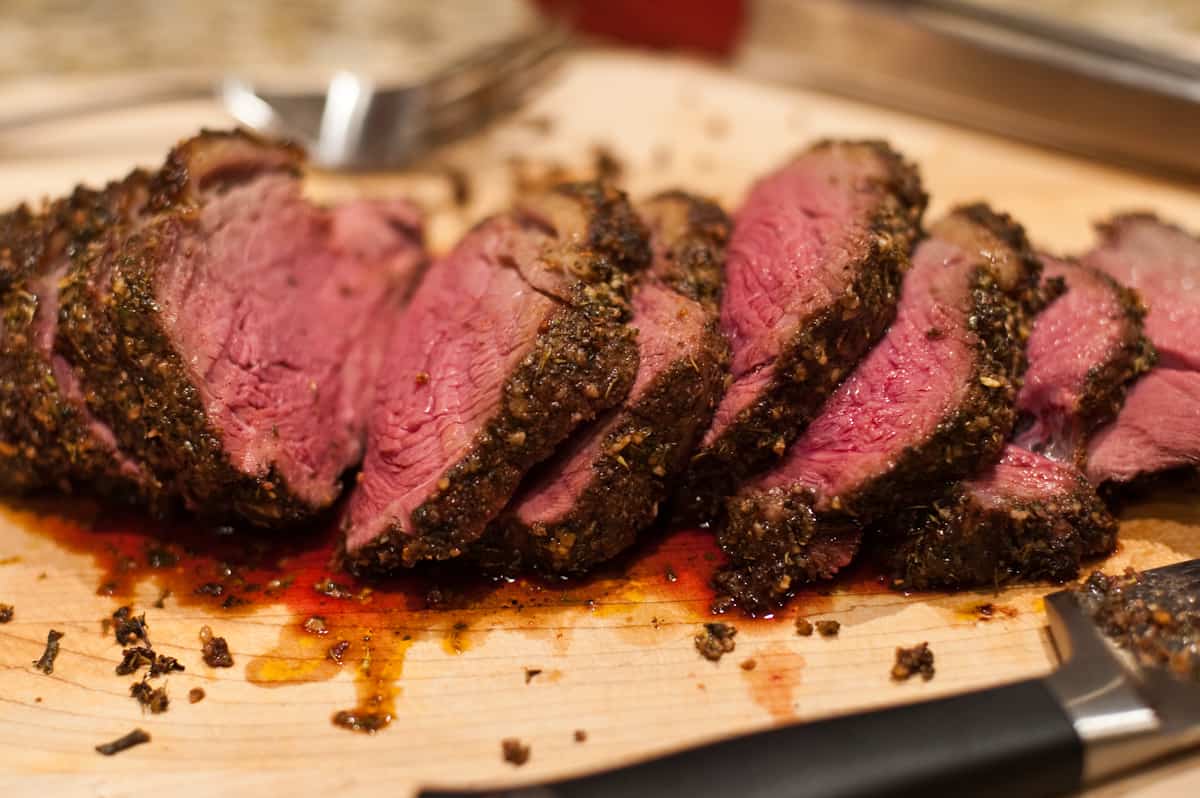 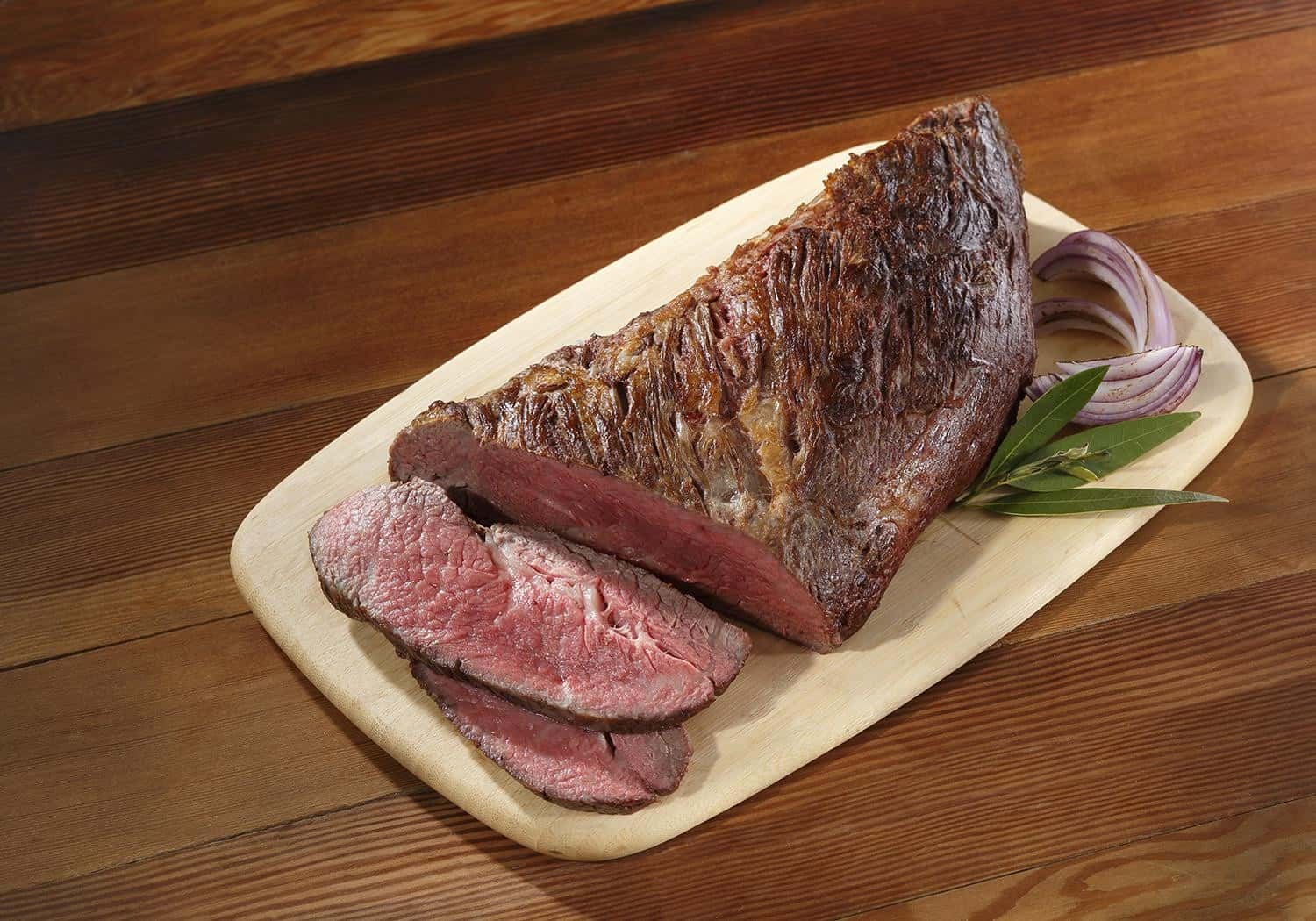 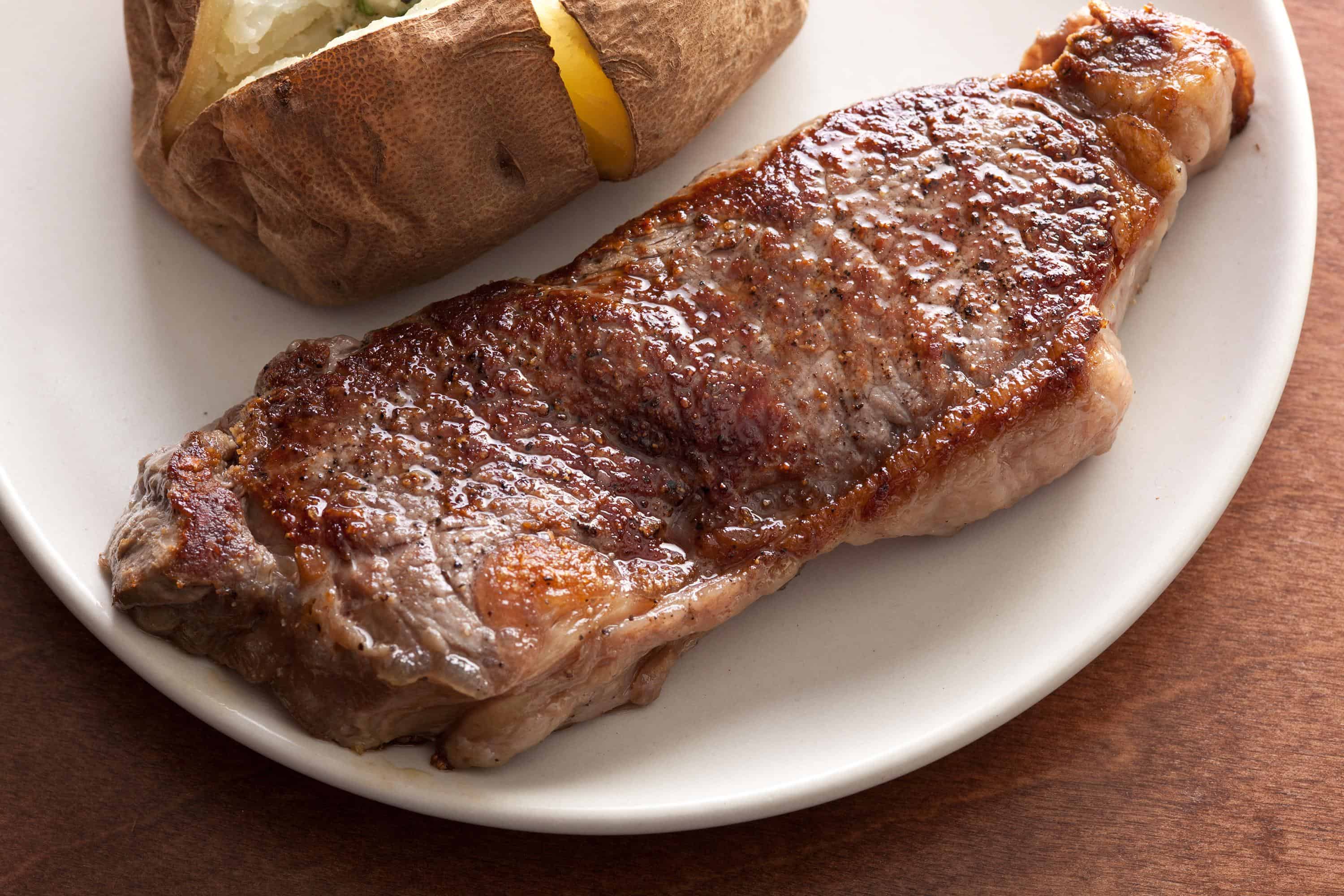 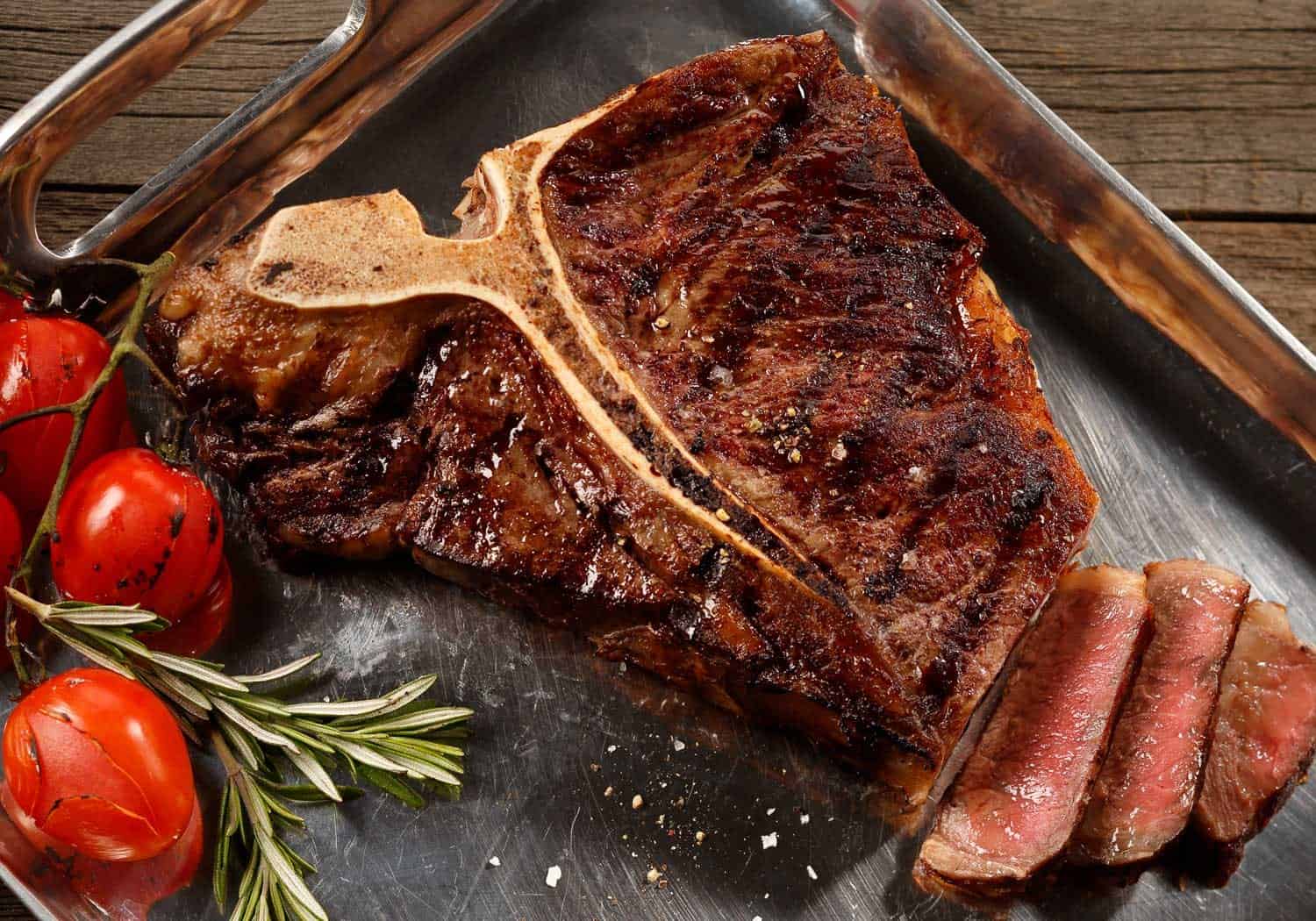 Most of us can identify a T-bone or a filet mignon in a pinch, or by reading the package, but when you start getting into the world of flank vs. tri-tip vs. strip, it can get a little dicey, leaving many of us guessing. Furthermore, even if you can spot the difference at a hundred paces, many of us still can’t determine exactly which one should be prepared in what way to maximize flavor. We apply the formula of meat+fire = good, and put it over and open flame until it’s done to our liking.

Knowing more about what makes each cut of meat special, and thus how to turn it from raw slab into entrée par excellence will make us better carnivores, better cooks, and far more satisfied eaters.

Below you’ll find an handy infographic outlining where different steaks are cut from a cow. The thing to remember is that the tenderest slices of meat will come from either the rib or the loin region. The reason these are the most tender is due to the type of muscle built into the part of the body, the way that muscle is used, the chemical makeup of the proteins, and the overall length of the muscle strands. If you would like a more exacting breakdown, the fine people at Texas A&M University – where steak is practically a religion – were kind enough to help us out with this science of meat tenderness guide.

The less tender cuts are (in order from least to most tender) are plate, sirloin, round, and flank. These generally need to be marinated and cooked with extra wetness to help get them as soft as possible. More tender options benefit the most from being cooked dry or smoked, since they’re going to generally be succulent however you prepare them.

Since tenderness of a steak is also going to rely on your cooking technique, it helps to know how to go about getting your meat its best. Here, The Spruce lends a hand with their basic steak cooking guide.

While we won’t cover every cut under the sun – because there’s innumerable butchering methods around the world and various rules depending on the kind of cow you’re using – we’ll hit the ones most likely to crop up at your local meat counter.

Coming from the tenderloin and strip loin, the only major difference between these cuts is in how the meat is distributed. T-Bones will bear a significantly smaller tenderloin area while the Porterhouse will have a smaller strip segment. To the naked eye, they’ll look nearly identical, though the Porterhouse is generally bigger overall.

Known by many as a New York Strip Steak, these cuts bear a lot of similarity to a T-Bone because they use the same basic meat portion, which is either a strip or short loin that sits on the underside of the cow. If it’s attached to bone, it’s a T-Bone, if it’s nothing but raw loin, it’s a strip. The placement makes it a lazy piece of muscle that is tender because it rarely does much of anything.

A complex cut that shares much in common with the Filet Mignon, in that preparation is part of the overall experience. The cut itself is historically from the sirloin, but these days often use the tenderloin instead. The difference here is an academic matter of preference as the sirloin is a little tougher, but more flavorful, and the tenderloin is less tasty, but more tender.

The name comes from the sauce originally used in preparation, which is a white wine reduction with shallots, known as Chateaubriand. Today, these steaks can refer to any large cut of meat from the thickest part of a filet.

French for “Dainty Filet” the Mignon comes from the absolute tenderest end of the tenderloin, which is to say the softest part of the cow. Also called “filet de boeuf” in France, these pieces are typically the most expensive cut you can find. They are supremely easy to cook in any number of ways, but since they are so tender, they also tend to be slightly lacking in flavor. To compensate for this, Filet Mignon are usually wrapped with a strip of bacon to help provide extra texture and taste to the melt-in-your-mouth meat.

The cut that produces Prime Rib along with beef ribs when served on the bone, or Ribeye steak when grilled without the bones, there’s a lot of variety here, though they all produce the same basic thing: A steak that is a marvelous mix of both tenderness and flavor which can be cooked any number of ways for supreme succulence.

Few people tend to buy Tri-Tip steaks, and that’s a crime that we suggest everyone remedy. Due to their low popularity, you can often get these for less than they are truly worth. A boneless triangle cut of meat that comes from the bottom sirloin butt, they bear enough loin tenderness to be quite easy to eat, but have the added flavor benefits that come from using slightly tougher parts. Marinating is suggested, and smoking is recommended for Tri-Tip.

The sirloin is one of the most popular meat cuts, since it is both tender and flavorful, but you must be careful when buying, as not all Sirloin are created equal. There’s top sirloin, which is comes from higher up on the animal’s back, where it performs fewer actions and is therefore more tender. It’s close to where T-Bone and Porterhouses are cut. The bottom portion, being deeper in the body and closer to the legs is moderately tougher, thus requiring more care when preparing. Top Sirloin is labeled as such, with bottom sirloin steaks commonly called just “Sirloin.”

An enjoyable cut that comes from the diaphragm, the edges are tender and flavorful, with the center bearing a tougher, more sinewy texture that wholly changes the eating experience depending on where you cut it.

Flank steak is one of the more common cuts used in dishes such as tacos and broils because it’s tasty, but a bit on the tough side. If you’re making a steak stir fry or other steak-reliant dish, you’ll often use Flank or Skirt steak, though many have begun trying to find ways of cooking flank steak alone since the right touch can render it fairly tender and immensely flavorful.

Loaded to the gills with flavor, but too tough to be enjoyed alone, Skirt steak is beloved by the UK, where it’s used in fillings, and many Latin American nations that rely on it for any number of mixed dishes. Skirt is best thought of as tough flank that rarely works alone.

Tough and tasty, the round or rump encapsulates a large area that yields top round, bottom round, and eye round, though some cultures have even more. Usually if you’re throwing cheap steaks on the grill, this is what to reach for, as it’s a common type of meat that’s fairly cheap, but extremely tasty. Be warned, if cooked poorly, the Rump and Round become tough as boiled leather.

Carved from beneath the shoulder blade, a Flat Iron is unusual in that it’s cut with the muscle grain rather than across. The result is an affordable steak that’s tough but scrumptious when done well.

A truly generic steak that’s often turned into ground beef due to the fat to meat ratio, the Chuck can be cut from many spots and covers the widest amount of steaks available. Mostly tough, this type of “steak” is usually found in a roast, stew, or braise because it needs a lot of wet heat to melt down the hardened protein and collagen.

Cheap and tough as hell, the Plate is fatty and hard as a ten penny nail. If you’re going to go to the trouble, your steak cooking game needs to be on point.