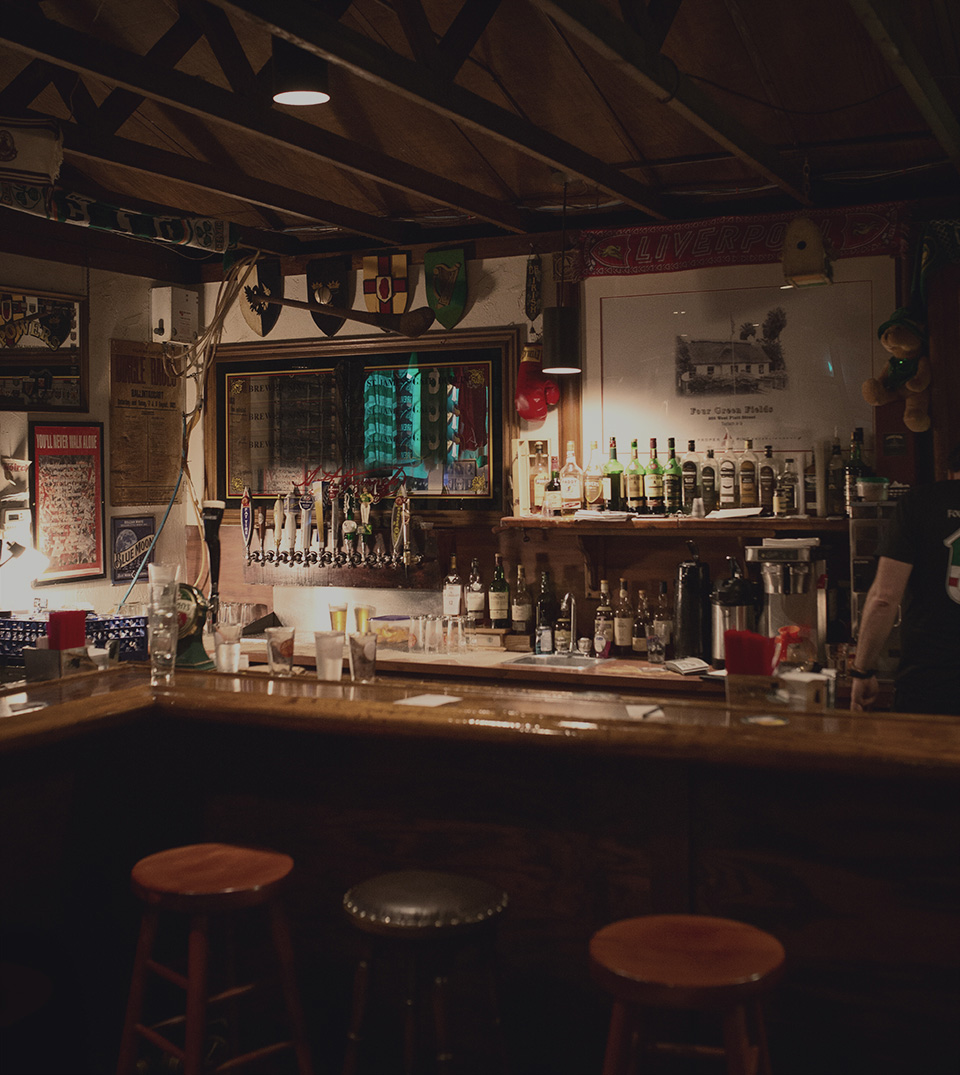 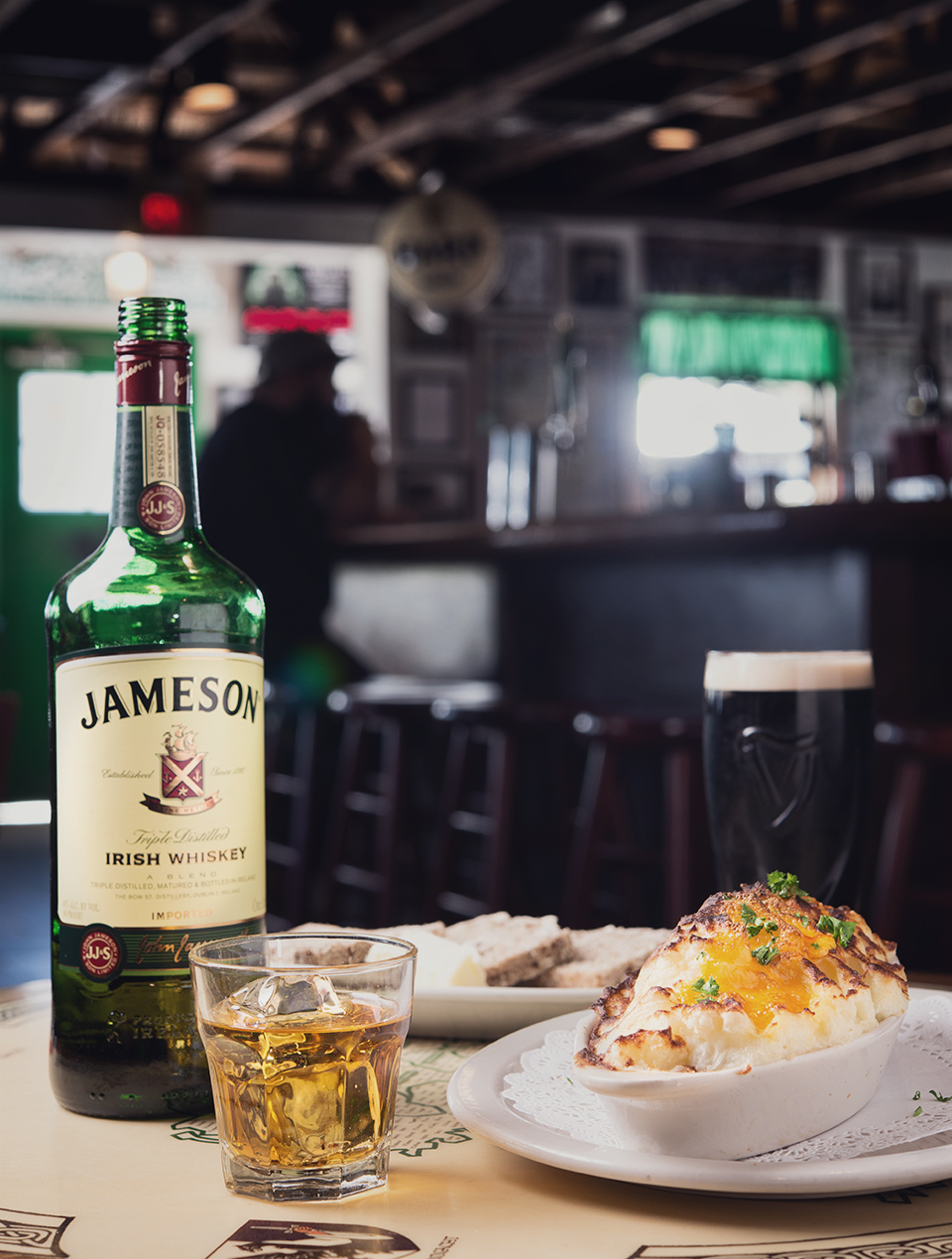 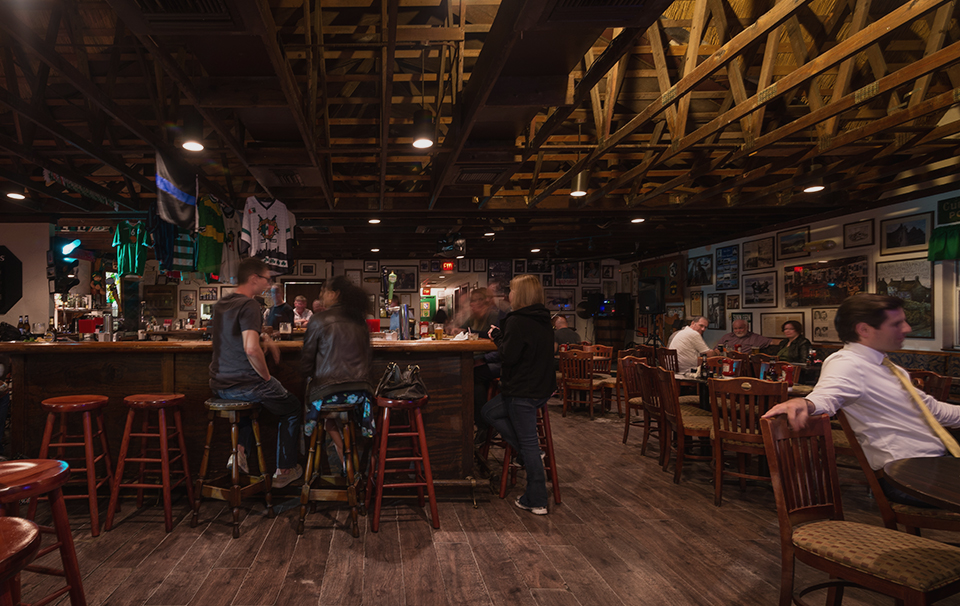 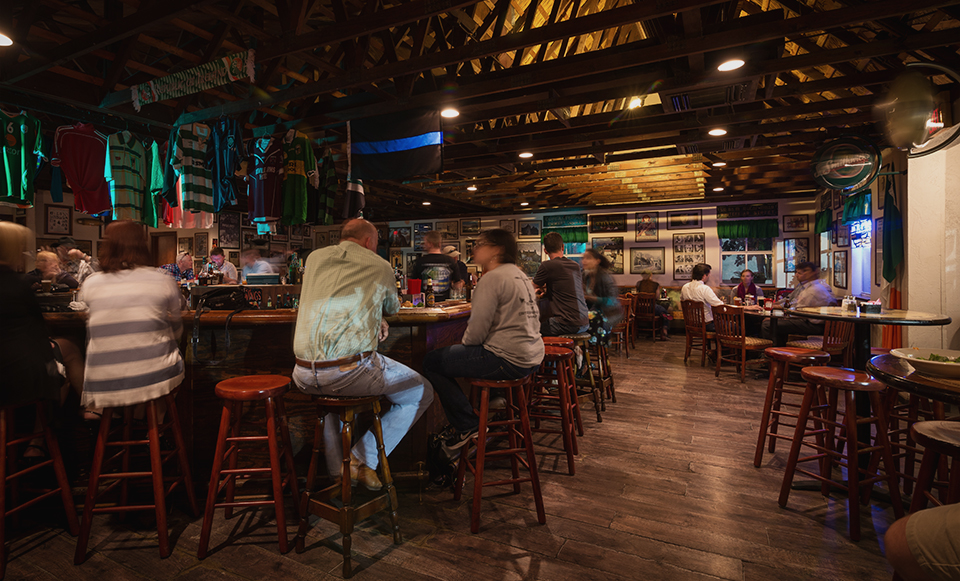 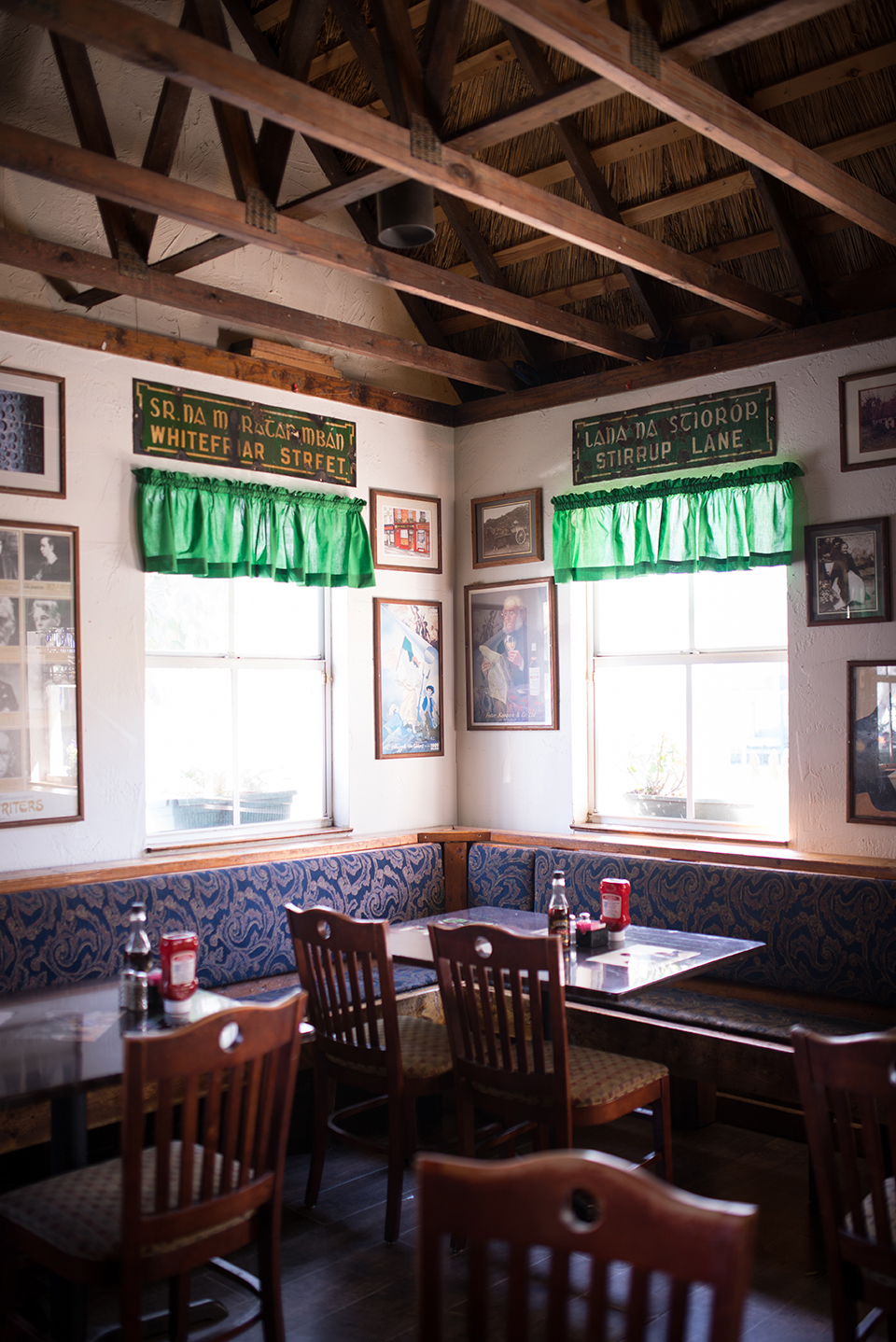 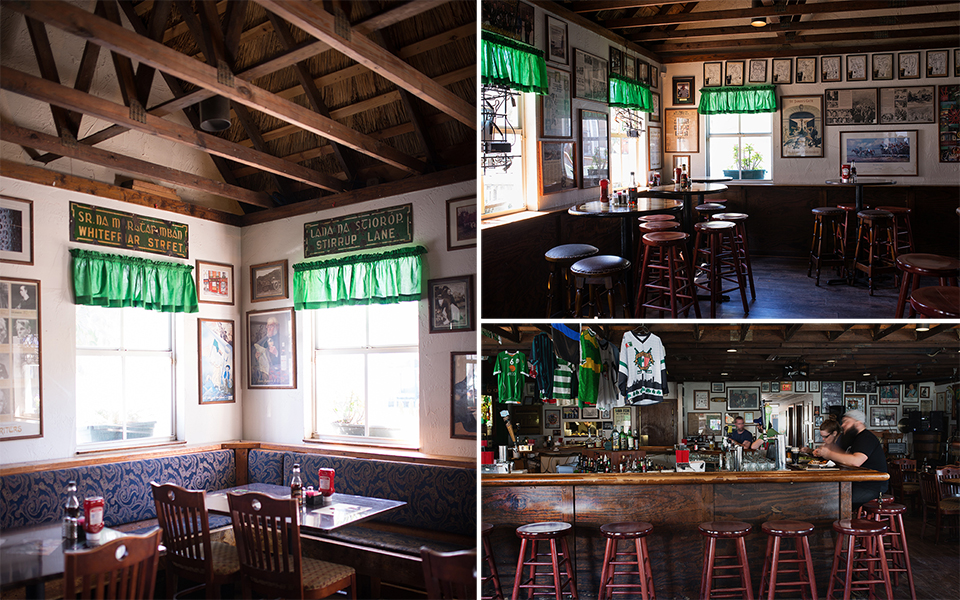 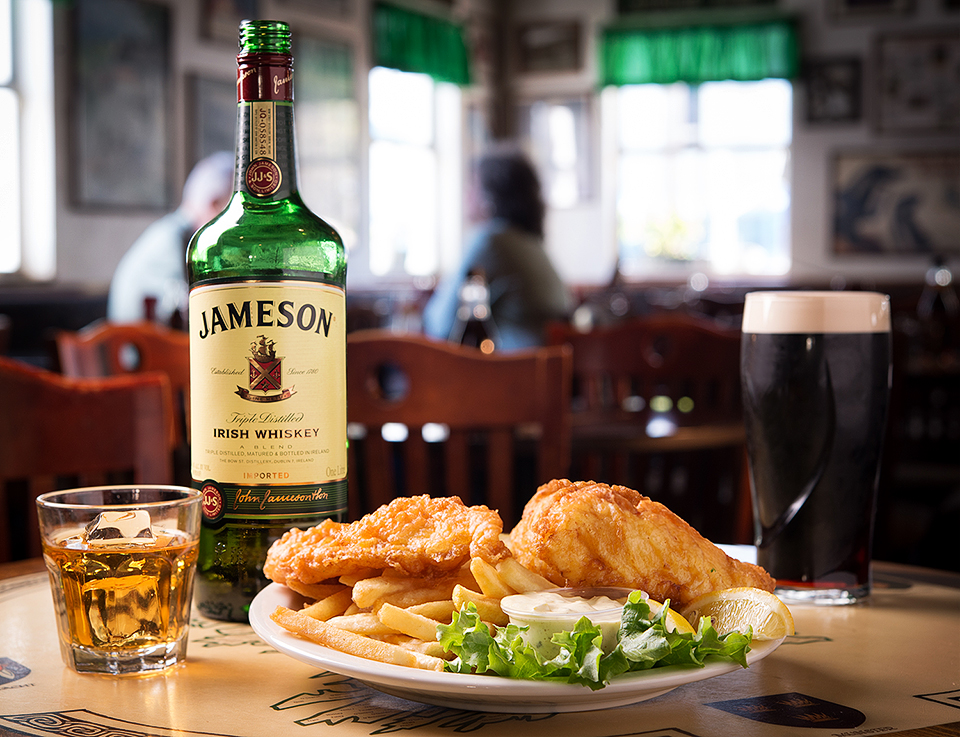 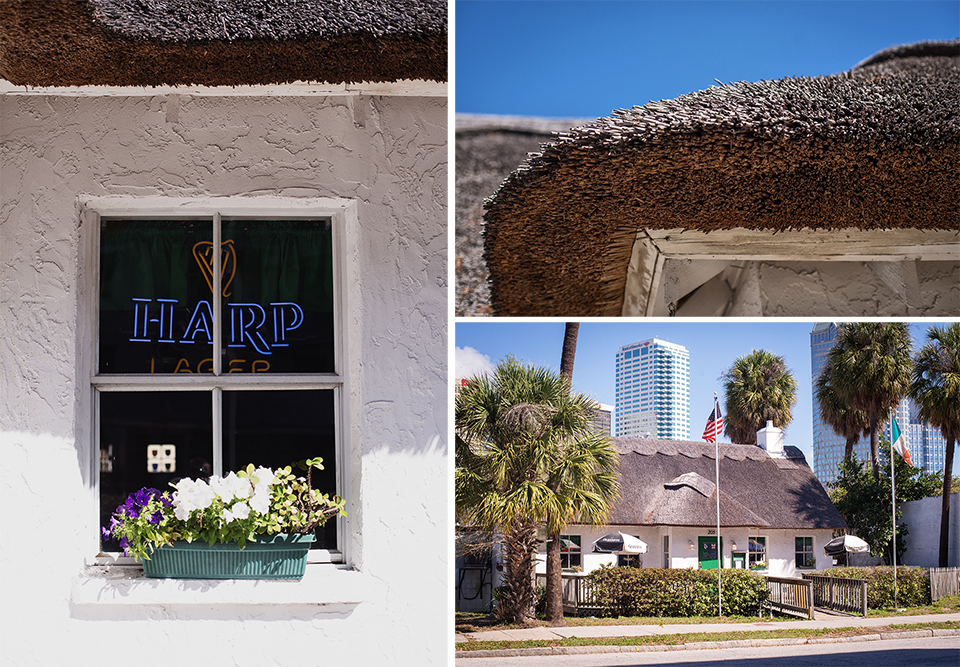 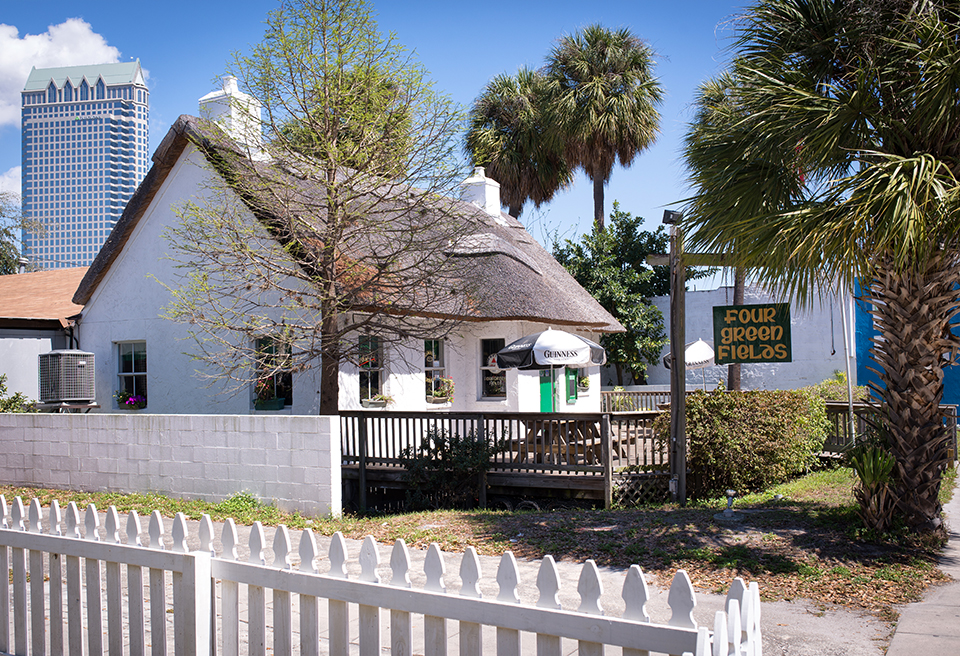 Four Green Fields Tampa – You can find a little bit of Ireland in the most unlikely of places.  Somewhere between the palm trees and skyscrapers in downtown Tampa, a thatched roof Irish cottage serves cold beer, great food and fine Irish whiskey to a varied group of guests.  In a town that that has more to do with Spring Training and cigar culture than it does with the old emerald isle, this little green gem is a pleasant surprise.  It is a one-of-a-kind pub in modern America, featuring a distinctive thatched roof that can’t be experienced elsewhere on the new continent.  It’s the kind of place where you learn how to toast in English, curse in Gaelic, and smile in a language that is universally understood.  It is Four Green Fields, the closest thing you can find to Irish soil in the American South.

Since pouring its first pint more than 20 years ago, Four Green Fields has offered a rare pub experience that can’t be duplicated stateside.  Sure, there are other bars that serve a tall glass of the black stuff or a neat tumbler of gold, but it’s the crown of Four Green Fields that makes it unique.  Above its white walls, an authentic thatched roof has covered Four Green Fields since it opened.  Thatched roofing was once a staple of early European architecture, but after a long period of obsolescence, it has returned to become a celebrated fixture of historically-reverent design.  Between rustic-inspired mansions and modern movie sets, only a handful of thatched roof buildings exist in the United States.  Amongst Irish pubs, Four Green Fields is the one and only– if you’re sipping and savoring fine craft whiskey under a thatched roof, you’re either at Four Green Fields in Tampa or you’re in the old country.  Including a handful of other global anomalies, this unlikely pub on Florida’s gulf coast is as authentic as the place your great-great grandfather spent his Friday evening in Ireland.

At 205 West Platt Street in Tampa, Four Green Fields has a direct line-of-sight to the Hillsborough River and the Tampa Bay, a shallow inlet where manatee come to warm themselves in the cooler months.  Its home city is pretty unusual in Florida– it isn’t a prime destination for tourism or retirees, just an active and modern city with its own identity.  Beyond neighboring Irish-themed bars like The Dubliner and James Joyce, Four Green Fields is one of the few escapes for locals that isn’t like the rest.  If you’re looking for green beer and silly slogans on St. Patrick’s Day, this isn’t the class of bar you’re looking for.  Four Green Fields is about good food, great music, fine drinks and excellent company in a very sunny city.

The food at Four Green Fields is standard fare for an Irish pub, but its execution is traditional in spirit.  I can’t speak for every reader here, but my own story shares a lot of commonality with the offering at Four Green Fields.  Shepherd’s Pie and Irish Beef Stew were common dishes on the kitchen table where I grew up, a happy meat-and-potatoes household outside of Detroit, Michigan.  With respect and admiration to the home-cooked heritage my mother instilled in me, the offering from Four Green Fields is the closest thing I can get to a visit home.  There’s waxing poetic and then there’s honesty, and this is purely the latter.

Beneath the thatched roof of Four Green Fields, a raised platform welcomes touring acts and local bands for traditional Irish music.  On weekends, Irish bands play for standing-room audiences that sing along with every word, as traditional songs and current pop fall on familiar ears.  My own favorite is Pat Dunlea, a local Irish expat who is one part St. Patrick, one part Willie Nelson, serving up an irreverent-yet-proud collection of Irish ballads.  When Dunlea performs, expect a familiar drinking song to be paused for explicit [see also: hilarious] commentary about the song’s ancestral authors.

The back corner of Four Green Fields is a destination in its own right for lovers of Irish Whiskey.  There are options to mix and options to savor, and the full range of Jameson Irish Whiskey is amongst the latter.  The distinction is deeply important to this writer.  Having experienced smoky scotches and sweet brandies, there is something “just right” about the original from Ireland.  It might be innate or it might be learned, but the smooth, almost story-telling appeal of a fine Irish blend is something to behold.  You don’t cut this with cola, you sip and savor the story written by the craftsmen who have bottled this history for generations.  That’s what I came to Four Green Fields to learn– the story behind the bottle of Jameson and the craftsmen who distilled it are a part of the appeal, the whisper you hear with each careful sip.

While Four Green Fields could be located anywhere, from Chicago to New York to Boston and beyond, it chose as its final home a place under the sun in Tampa, Florida.  I share its story.  I am lucky to have an escape like Four Green Fields so close to my home, a place to get away and share a good drink with friends who I’ve known before and have yet to meet.

If you ever find yourself in town, I welcome you to join my new friends and old at Four Green Fields.  It’s not just a special place on St. Patrick’s Day, it’s a special place to many of us every week of the year.  And at Four Green Fields, there’s a pint of the black stuff and a tumbler of Irish whiskey waiting with your name on it.  As they say back in the old country, Sláinte!

5 comments
TheCoolist is supported by our readers. When you buy through links on our site, we may earn a commission. Check out our privacy policy.
Join TheCoolist
100% free, unsubscribe anytime.
Related Reading
Let's connect