BMW Solar Carport – I love the electric car, and I think it’s a crying shame that it hasn’t yet become more widespread (though I suspect there are a few reasons for that). The simple fact is that we’re eventually going to run out of oil and gasoline – we need cleaner alternatives, both for our own sake and for that of the environment. Electric cars (assuming they’re powered with clean energy) are just the ticket.

Corporate conspiracy theories aside, there are a few reasons the electric car hasn’t quite caught on as much as it should. The first of those is a marked lack of supporting infrastructure. Even in the West, there simply aren’t that many car-ports or parking spots designed for hybrids. That’s something BMW is looking to change.

The manufacturer’s California-based DesignWorksUSA design studio just recently released a little prototype concept known as the Solar Carport, which re-imagines the traditional garage as a high-tech solar-powered charging station for hybrids. The Solar Carport features a flat roof which incorporates twenty-four thin glass-on-glass solar panels, with a modular structure that enables it to support a wide range of different models (though primarily the BMW i3 and i8).

Aside from being high-tech and sustainable, the Solar Carport also looks incredible. It features a number of white connector pieces made from lightweight carbon fiber, all supported by bamboo struts. Within the carport rests the BMW i Wallbox Pro, a device designed to regulate and monitor vehicle charging which can also divert excess power to use in the home (thus reducing its owners electrical bill fort he month).

Naturally, to gain the full benefit of the solar-powered wonder, its owner would have to live in a naturally sunlight-rich location.

Of course, there’s no word on whether or not this prototype will even see production – it’s still very much in the conceptual stages, after all.  Should the electric car finally start to catch on? I don’t see any reason why BMW wouldn’t release it. 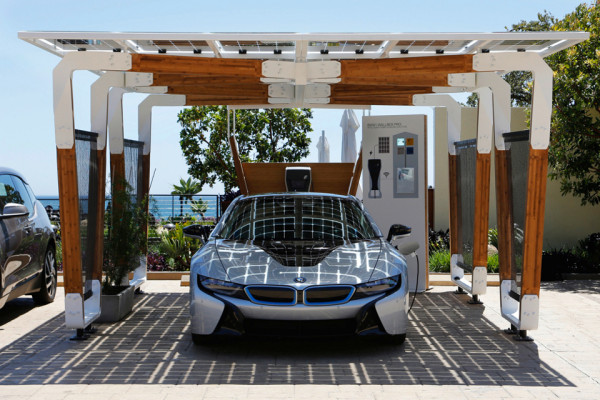