The invention of the umbrella can be traced back thousands of years, but never to one absolute source. It’s use has been depicted in historical texts, images and carvings dating back millennia– to ancient Rome, Egypt, China and the Middle East. Today, we may take this handy tool for granted. On the rainiest of days, what would you do if this tool was never created?

To celebrate the value of the umbrella in modern life, here is TheCoolist’s list of 20 amazing, creative and futuristic umbrellas that have taken this classic invention into wild new frontiers. 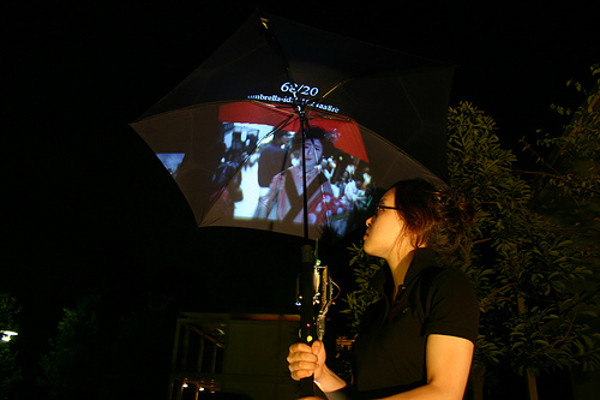 Ever noticed that the common texture of your typical umbrella canopy is not unlike a projector screen? Designers Takashi Matsumoto and Sho Hashimoto once noticed the same similarity– and upon that realization they created the Pileus Internet Umbrella. Pileus is an umbrella that includes a mobile PC and a projector to display live internet content while keeping its user dry in the rain. While you’re singing in the rain, Pileus can play a Flickr slideshow, show a weather map update, watch YouTube videos and even check out updates here on TheCoolist.com… Don’t plan on getting your hands on a Pileus any time soon, as this umbrella is still in prototype stages. 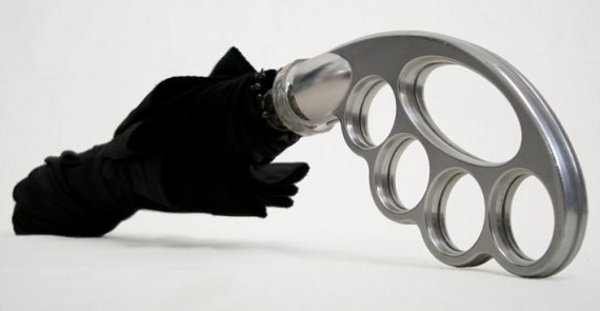 Are YOU talking to ME? The Umbuster umbrella by Birkiland is one part rain gear and one part deadly weapon. Umbuster’s handle is a classic set of brass knuckles, or a “knuckle duster” as they call them across the pond. Weave your fingers through these knuckles, you’ll be protected from both the rain and the dodgy blokes stupid enough to step to you. “But being as this is an Umbuster, the most powerful umbrella in the world, and would knock your head clean off, you’ve got to ask yourself one question: Do I feel lucky? Well, do ya, punk?” 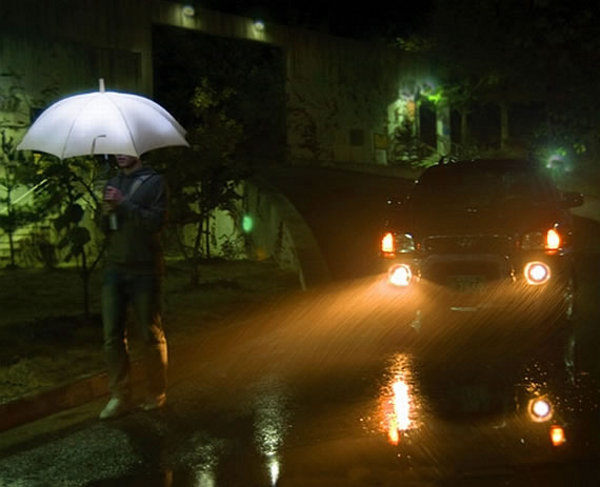 The LightDrops umbrella does precisely what it’s name implies– it turns drops of rain into light. How, you ask? LightDrops employs a conductive membrane called PDVF that converts the kinetic energy of the falling water into electricity in trace amounts. Conceptually, this electricity will be enough to power LEDs within the inside of this umbrella’s canopy. So while you’re walking through the rain, you’re generating renewable energy that yields a stunning, stylish appearance. 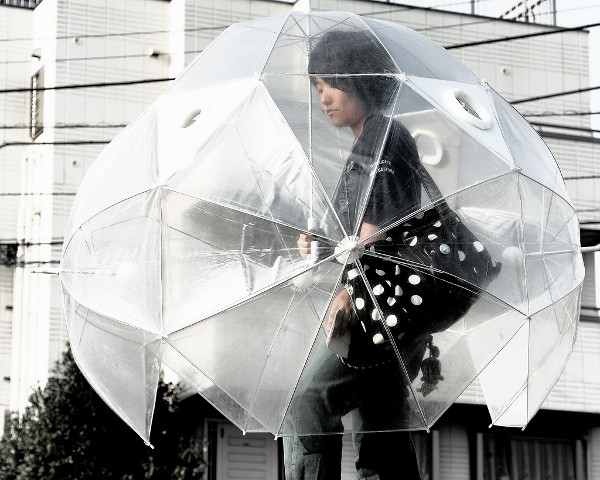 Even the largest traditional umbrellas can’t keep you dry in rains mixed with heavy winds. In cities like Chicago, the rain comes at you sideways– and the designer of the Superbrella has an idea that’ll keep you dry in the toughest of rainy climates. The Superbrella is made of five clear umbrellas– one on top and four in each cardinal direction. In the four corner triangles that were not covered by the umbrellas, the designer has inserted a patch with a rain-proof hole that allows for aeration. Grab yourself a Superbrella and a pair of tall rain boots– you’ll stay dry in the toughest of rains.

Special Note– if you’re not a cute, trendy girl as shown above, exect to look like kind of a toolbox with this thing. 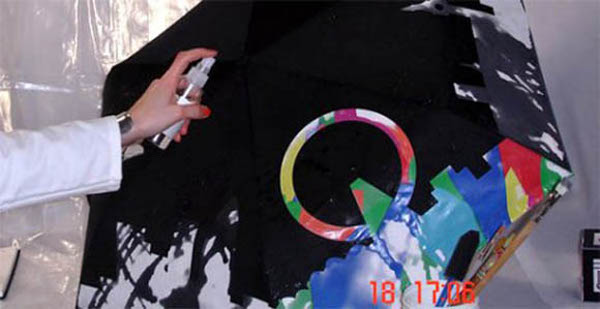 In your closet, this umbrella won’t look any different from your standard unit. Once this baby is put to use in at least a mild rain, its canopy will transform and take on new colors in a vibrant fashion. The Hydro-Chromatic Umbrella changes colors when wet, going from classic black to multi-colored and patterned. As it dries, the colors will fade to black– awaiting its next task when the clouds bring rain again. 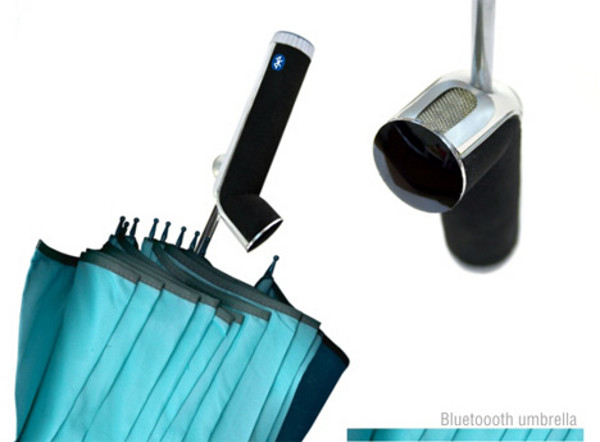 We’ve all been there– you’re walking in the rain and wind, struggling to control your umbrella and then your phone rings. Can you spare a free hand? With the Bluetooth Umbrella, you can. The handle of the Bluetooth Umbrella features a touchscreen display with a caller ID, a speaker and mic to communicate with your caller and a radio receiver. While Bluetooth mobile accessories have become a fashion faux pas, this one is functional enough to justify a few of your hard-earned dollars. Or you could just wait until you arrive at your destination and then take the call… 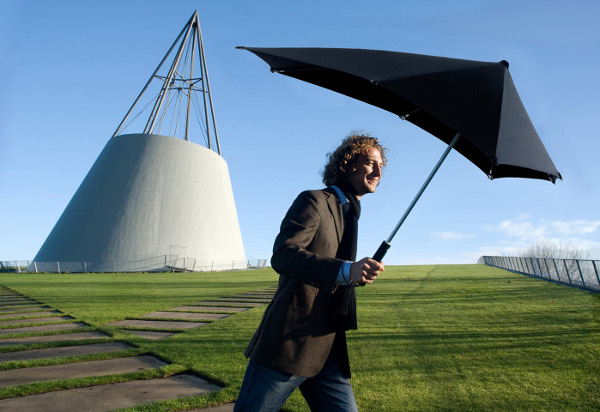 The Senz smart umbrella doesn’t include any high technology, it doesn’t tweet the level of incoming rain (whoa, good idea, actually!)– it just works better than your average umbrella. The Senz smart umbrella doesn’t blow out in high winds like your traditional umbrella. Like a windsock, this umbrella moves its tail in the direction of the wind, adjusting to maintain its structure and keep you dry. No frills — just simple and smart. 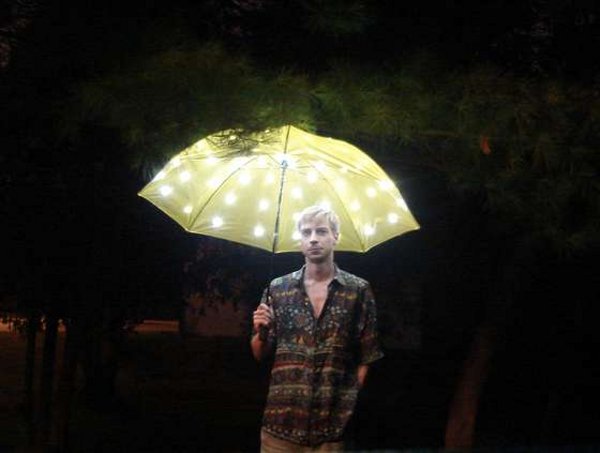 While you could splurge on the rare light umbrella, you could also just make one yourself. The people at Instructables have a guide on how to turn your basic umbrella into an LED-lit masterpiece. Grab yourself an umbrella, some LEDs and a working understanding of electronics, you can wire up one hell of a cool umbrella on the cheap. 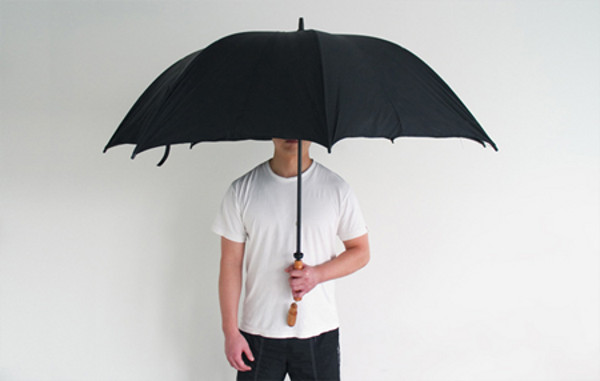 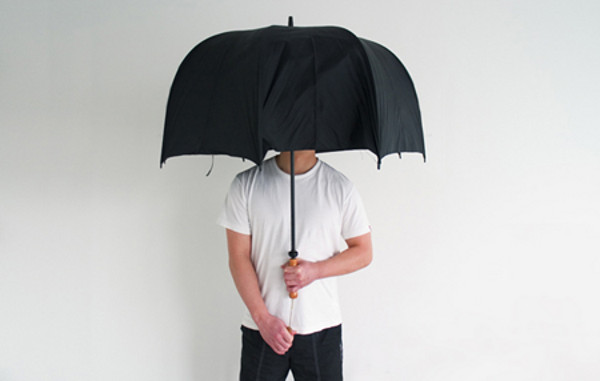 Designer Jooyoun Paek might have been poked in the eye by a passing umbrella or two in his day. To solve this problem, and protect the eyes of others, Paek invented the Polite Umbrella, an umbrella that contracts to allow space (and safety) for passers by. As another pedestrian approaches, simply pull the drawstring below the handle and the canopy (and its stabby points) contracts. Nice idea, Jooyoun — any luck with mass production? 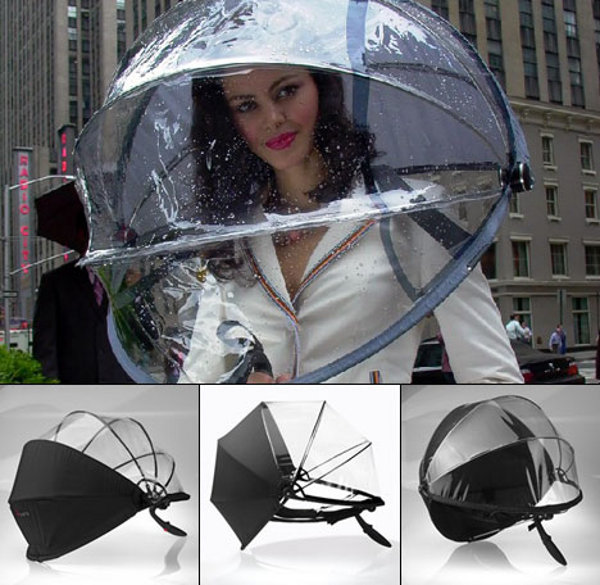 The Nubrella offers one primary and unique function– hands-free rain protection. The cost, of course, is looking a bit goofy, but at least you’ll remain dry. Nubrella features a strap system that fits over your shoulders, holding the umbrella in place even in heavy rains and wind. The Nubrella collapses and folds together for easy storage and carry, ready to pop open again as needed. Unlike many of the other items on this list, Nubrella is more than a concept– it is in production and purchaseable today. 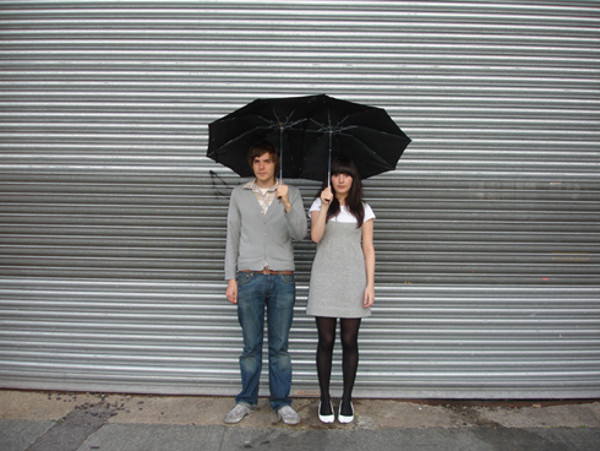 The Tandem Umbrella design brings about a classic case of “why didn’t we think of that sooner”? If you’ve tried to fit two people under an umbrella before, you know that somebody is going to get wet. The Tandem Umbrella solves this by adding two shafts and two canopies, woven together to allow a rain-bound couple to have equal protection. We’re curious, though– how does the Tandem Umbrella collapse? 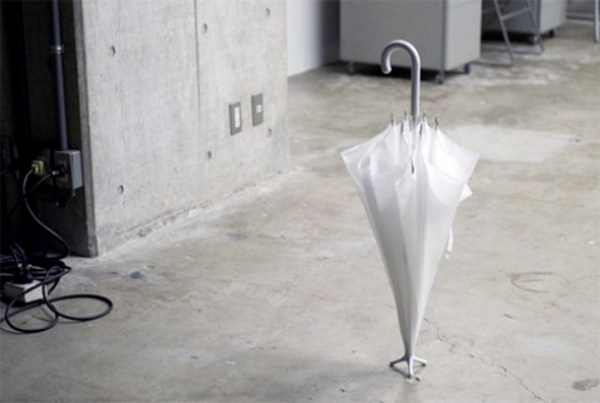 Like the Senz Smart Umbrella above, the Stand Umbrella is a true case of simple brilliance. No frills, no fancy tech, just ingenious functionality. When not in use, the Stand Umbrella rests upon itself, using a tiny tip-based tripod to keep itself upright. It doesn’t get any simpler (or smarter) than that! 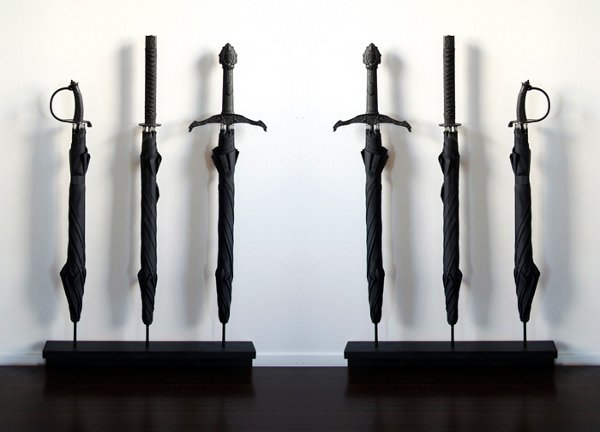 The Sword Umbrellas can be summed up in just two words: bad ass. While the canopy here is the same as your traditional umbrella, the handle sets these apart in a fun, rather violent way. While they can’t be used as weapons like the Umbuster above can, these Sword Umbrellas certainly look the fit. Buy one of these, and I’ll dare you to try and not swing it around making sword fight noises with your mouth. 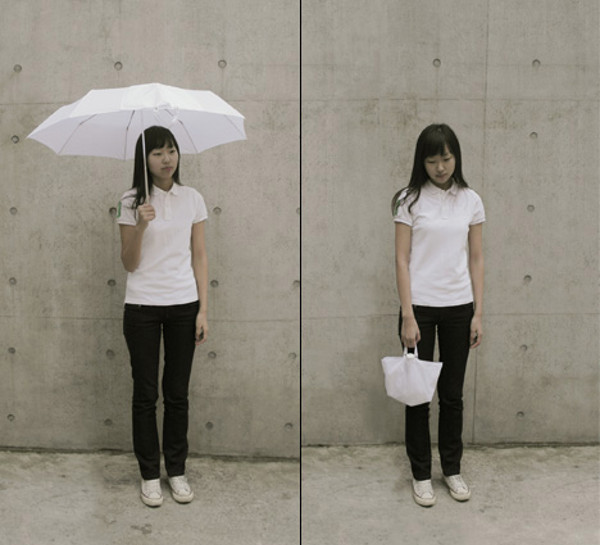 The Inside-Out Umbrella doesn’t leave a watery mess behind as it dries, it brings the remaining water with it. Once you’ve ended your rainy day commute, this umbrella won’t soak the floor where it rests– it folds into itself and creates a bag which carries the rain water that once covered it. At work or at home, this remaining water dries without leaving a mess. 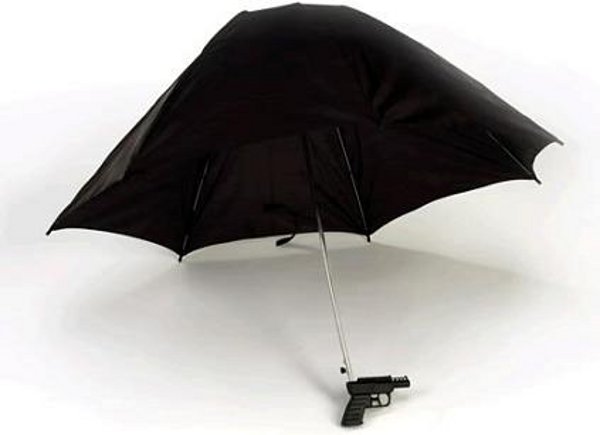 Continuing the theme of weaponized umbrella design, the Gunbrella features a toy gun as its handle. While the rest of this design is 100% traditional, the gun gives it a fresh, fun look for you to battle the rains. Personally, we’re a little leary about this design– if a passer by (or police officer) isn’t in on the joke, they might take you a bit too seriously for your own good. Be careful with this one! 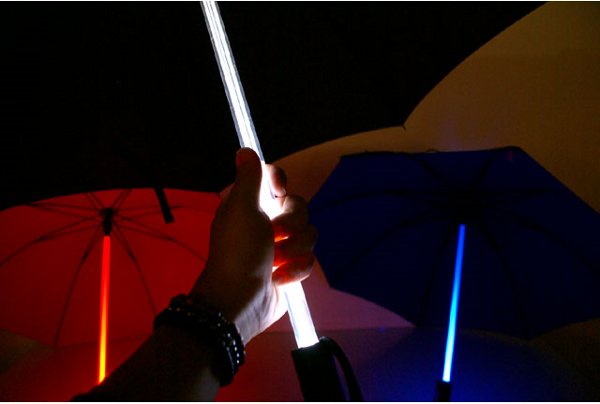 Fans of the cult classic film Bladerunner will instantly recognize these. The LightStick Umbrella features a luminous shaft– from handle to canopy, this umbrella gives off radiant light to keep you company (and looking stylish) during a night time rain. Surprisingly cheap, the LightStick Umbrella costs around $30 US, but presently only available in South Korea. We’ll take two– red, white or blue. 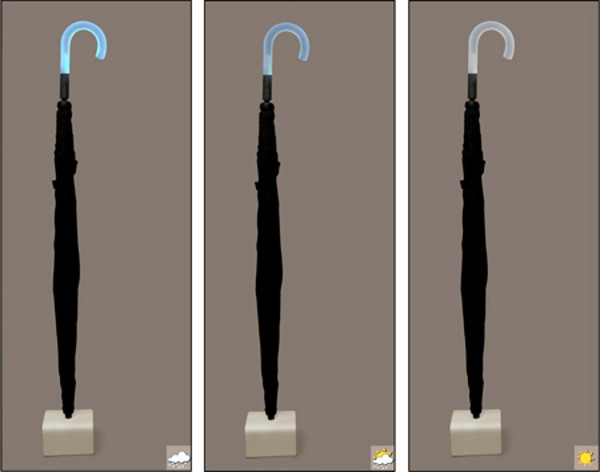 Wouldn’t it be nice if your umbrella could warn you not to leave home without it? This one can. The weather forecasting umbrella connects to your home (or office’s) wi-fi connection to deliver real-time weather data. This data is displayed by an illuminated translucent handle that glows blue when rain is approaching. When you’re on your way out the door, just glance at this umbrella and you’ll be forewarned whether or not you’ll need to bring this baby with you. 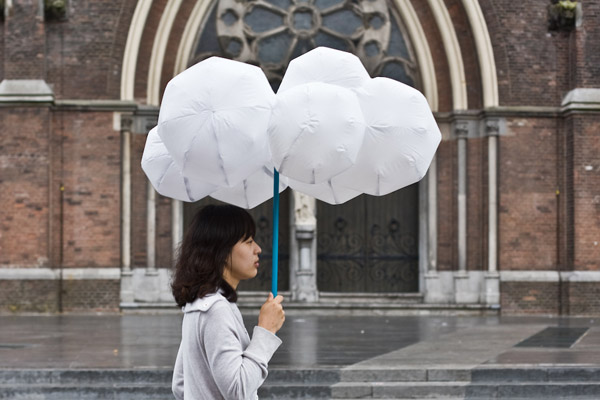 While perhaps not as functional as the others on this list, we included the Cloud Umbrella for it’s sheer thoughtful enthusiasm. This umbrella delivers the same functionality as your classic umbrella, but it is styled to stand out from the crowd by mimicking a cloud. The canopy on the Cloud Umbrella is actually a series of inflated spheres that deflect the rain away from you, keeping your torso dry while the sky falls around you. 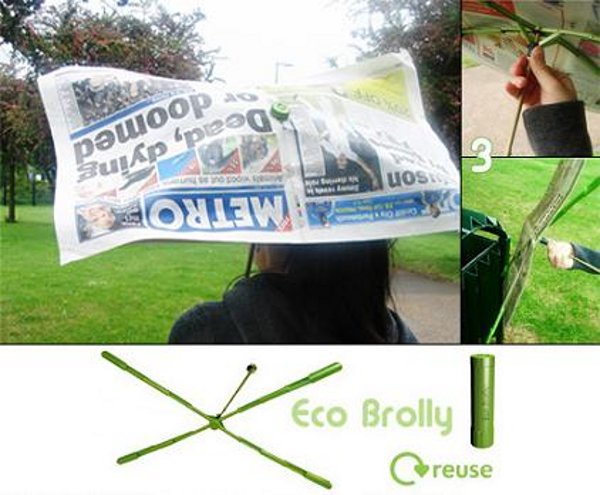 If you don’t have room for a mini-umbrella but have a green heart that desires to reuse, reuse, reuse, this little tool might be your type. The Eco Brolly or “unbrella” is a plastic frame, shaft and handle that attaches to a newspaper to provide temporary coverage from the rain. Hard or long rains may cut through this one pretty easily, but we still admire this designer’s resourcefulness. 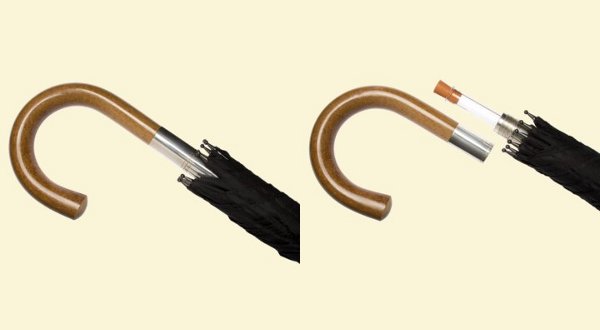 There’s nothing worse than being dry in the rain– or so believe the producers of the Flask Umbrella. Visually, this puppy may not stand up to the rest of the umbrellas on this list, but its’ unassuming appearance is what makes it so effective. Twist away the handle on this umbrella to reveal a tube flask, in which you can pour any matter of libation from whisky to wine. This one isn’t bad to have around on a rainy day… 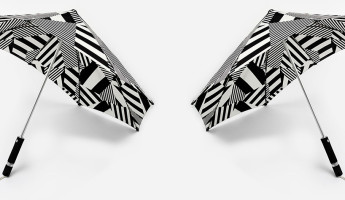 Maharishi Senz Umbrella is Art on a Rain Canvas 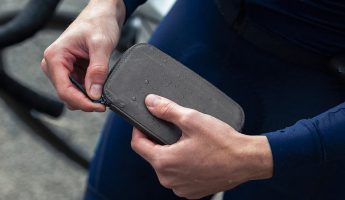 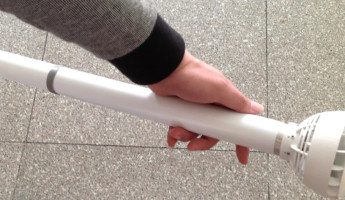 The Air Umbrella: Could This Be the Umbrella of the Future? 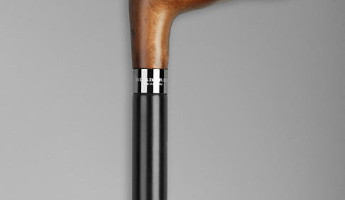 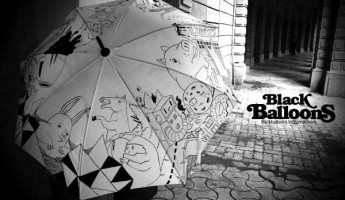 Hand Painted Umbrellas Made in India by Black Balloons