Mature Hairline: Causes of a Receding Hairline in Men + What to Do About It 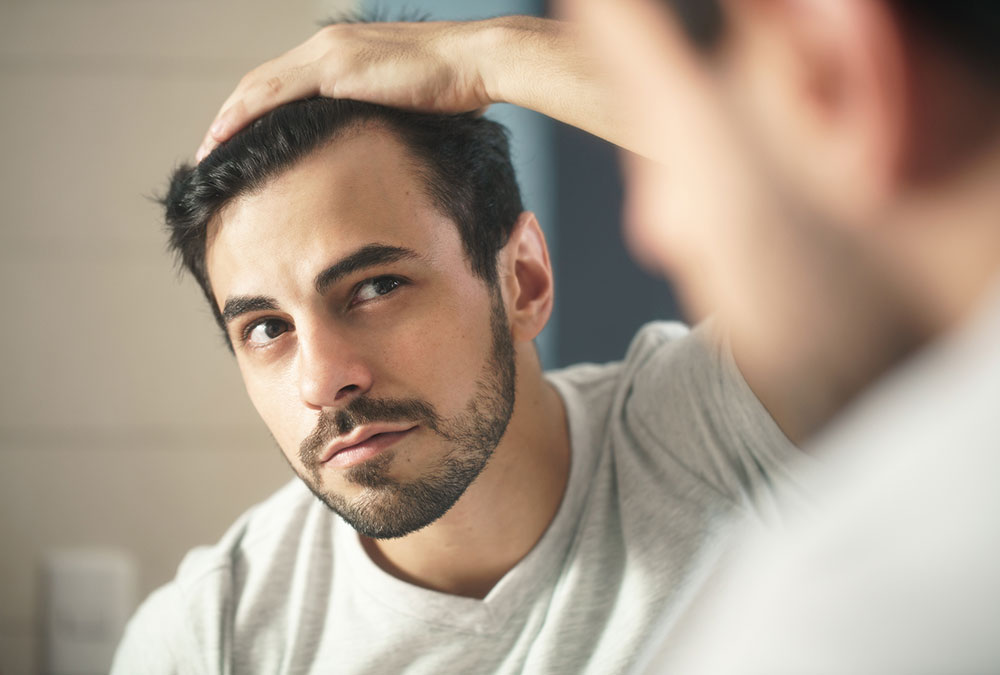 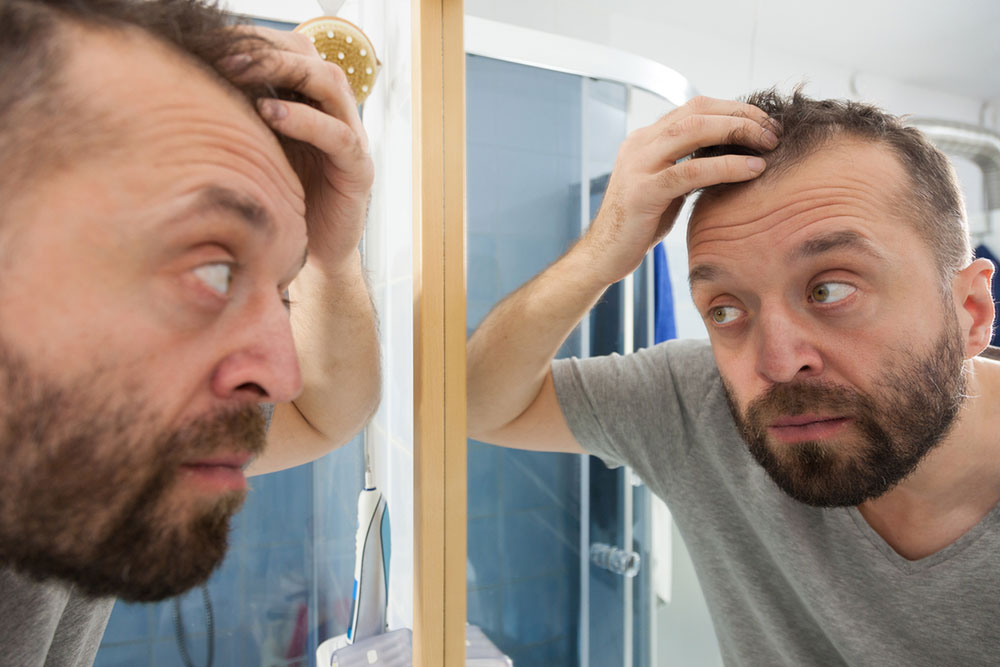 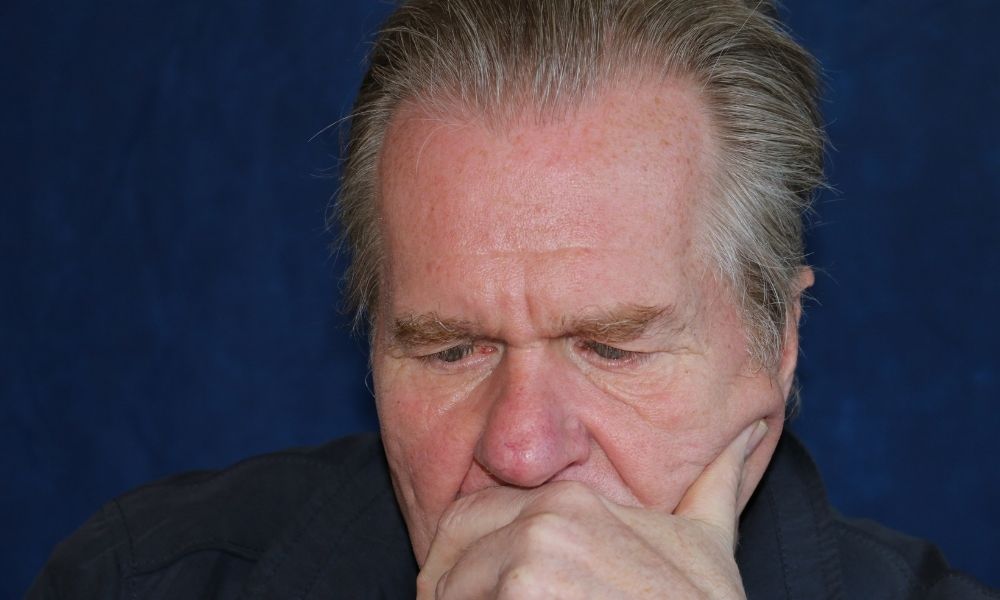 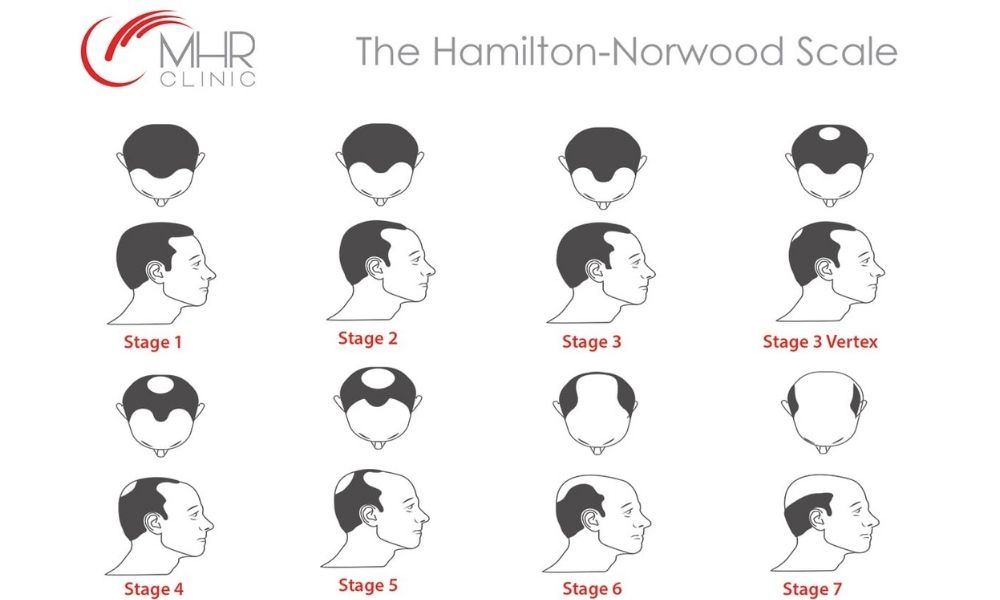 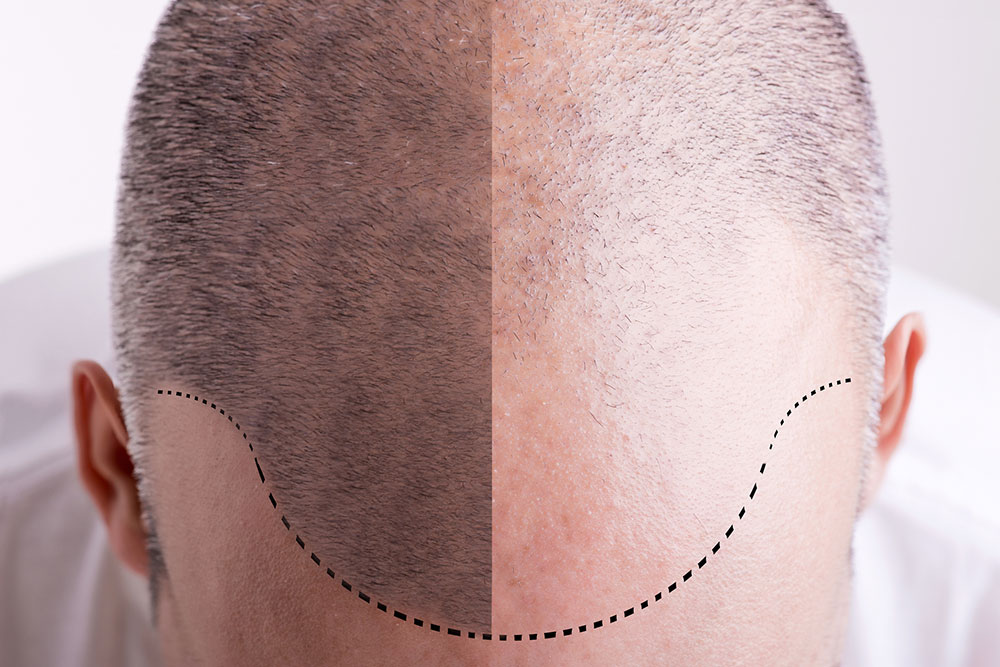 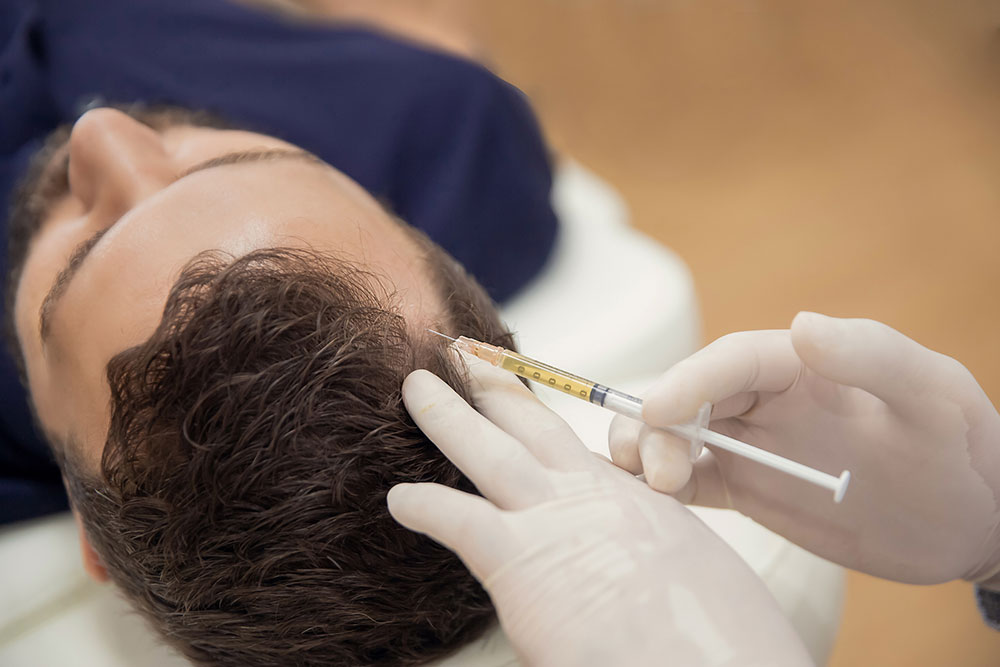 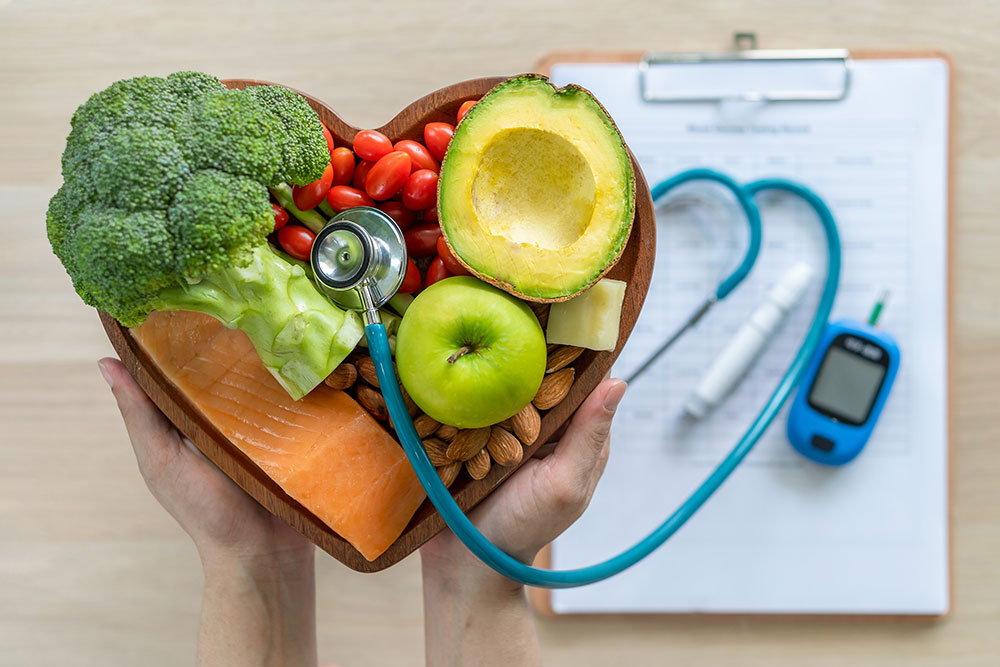 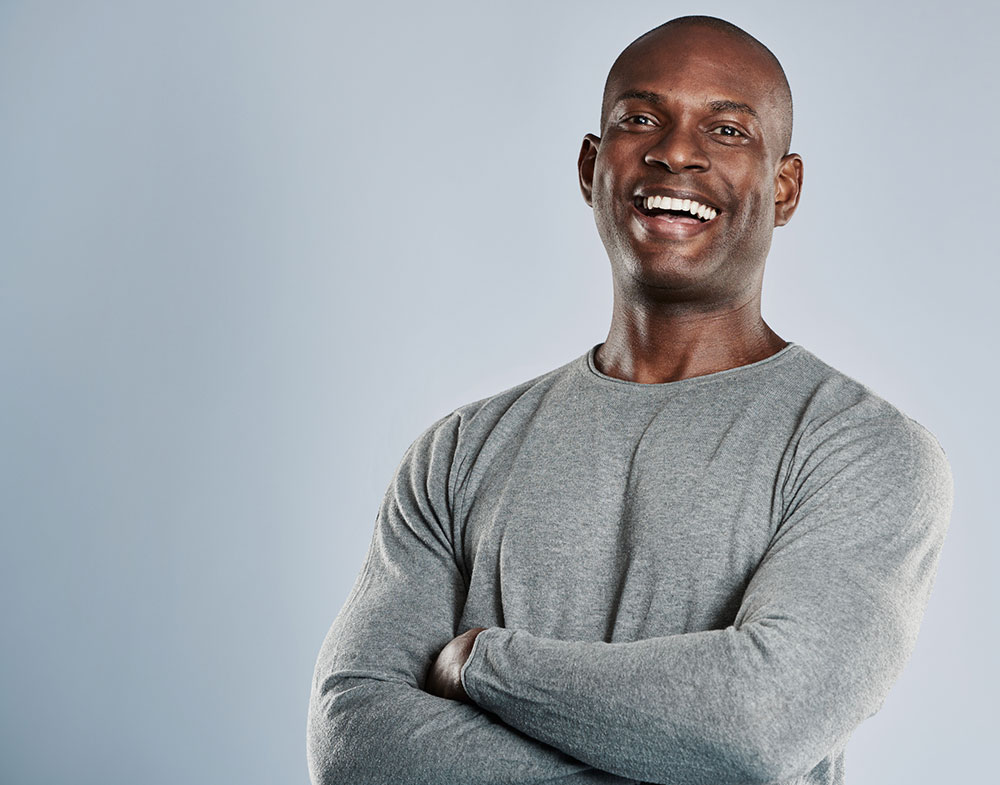 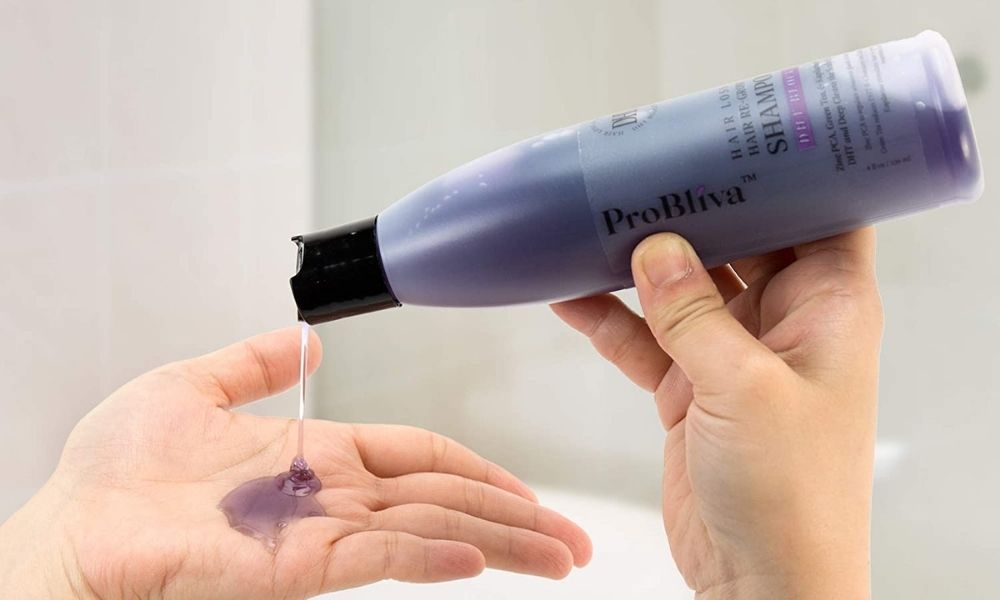 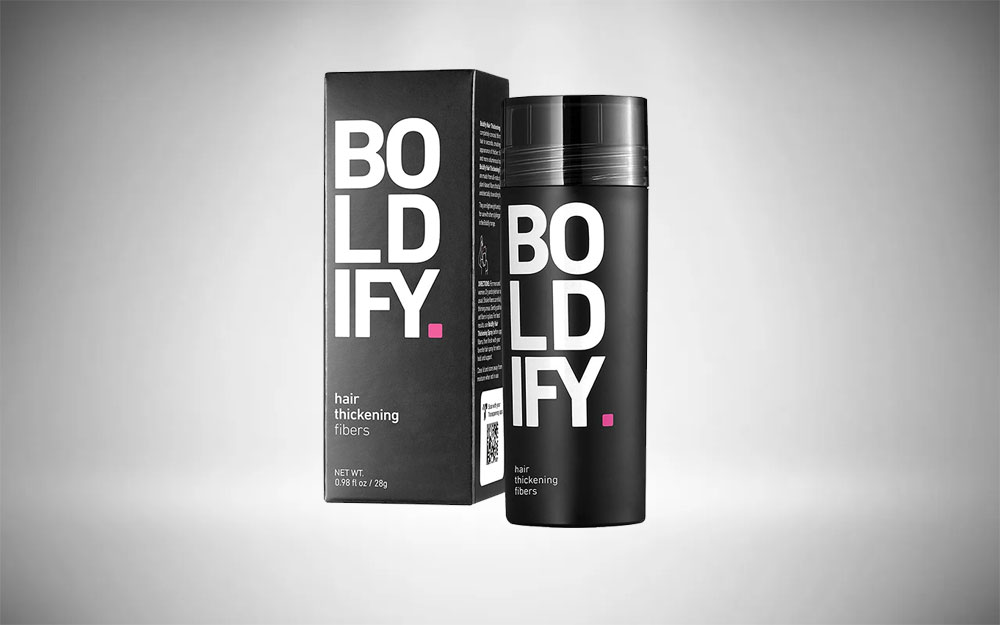 If you’re worried about your mature hairline, don’t be. Understanding what causes a hairline to recede in men will help you either slow it down, or embrace it. That’s what today’s guide is all about!

An aggressively receding hairline is a sight most men would rather not behold in their dressing mirror. But should it cause you sleepless nights?

Let’s make this clear from the start; it’s normal for the hairline to retreat on your forehead as you age. As a man, you may begin experiencing this from as early as 17 or much later at 29. Genes and aging being the key drivers of how fast the hair thinning process occurs.

Typically, the hair that’s retreated on your forehead settles on a well-defined hairline; a mature hairline. From that point, thinning of hair declines or stops altogether. Nonetheless, hair loss and hair thinning may persist in distinct portions of the head in what’s referred to as “pattern balding.”

That’s it for the basics. Now let’s get into more details.

What Is a Mature Hairline, Exactly?

A mature hairline is a new hairline that forms higher up on the forehead when men pass from adolescence into adult life. It occurs about an inch higher up relative to your childhood hairline and shouldn’t worry you in any way.

It’s not necessarily an indication of inherited hair loss; it’s a process that transpires naturally. Shockingly, only 5% of the male population maintains their adolescent hairline.

You may also take comfort in numbers as an estimated 85% of men experience a serious challenge of thinner hair by the age of 50.

Causes of a Mature Hairline

Hormonal changes in the body that begins during the teen years are responsible for changes in your hairline.

At puberty, the body begins producing testosterone. The testosterone is transformed into another hormone known as DHT (Dihydrotestosterone). The DHT levels in your system will dictate your hairline through the years ahead.

DHT functions by bonding to hair strands and making them thin out and fall off. The result will usually be a prevalence of a mature hairline among most men.

Production of DHT in generous quantities by your body is the primary cause of male pattern baldness.

When Does a Mature Hairline Start to Show?

A mature hairline’s starting age varies from person to person but is mostly between 17 and 29 years.

How to Tell if Your Hairline Is Receding

You’ll hardly notice a maturing hairline since it develops subtly. Fortunately, there are ways to keep track so that the maturing process doesn’t recede unnoticed.

Your juvenile hairline is usually rounder in appearance while the mature hairline is sharply defined. In certain instances, it evolves into a V-shape and may also feature a widow’s peak. If your hair recedes faster it will result in a more distinct widow’s peak.

Another noticeable sign of a maturing hairline is when the hairline moves backward to the temples.

Hair Loss: What Stage Are You on the Norwood Scale?

Hair loss occurs in stages. The Norwood Scale defines and categorizes the stage of hair loss by severity into seven stages with stage 1 representing no hair loss with stage 7 being the severest.

Such a standard point of reference makes it possible to know where you stand in your hair loss journey and what restorative interventions can be employed.

About Norwood Class A

Class A is a unique hair loss progression that’s pretty rare. Hair loss happens uniformly from the front of the head to the back with neither baldness occurring at the vertex nor pockets of hair remaining in the middle.

Mature vs. Receding vs. Balding

Are a Mature Hairline and a Receding Hairline Different?

For a mature hairline to form, there has to be a recession of the hairline. Nonetheless, they differ.

A receding hairline is ordinarily a consequence of male pattern baldness which is associated with aging and genetic predisposition.

There are various indications that your hairline is receding, and here are some of them:

How Does a Mature Hairline Differ from Balding?

Balding is what happens after your hair has been receding for a while. It’s more prominent than a mature hairline.

Whereas a mature hairline assumes a V-shape and affects the forehead region only, baldness touches up to the crown of your head and your hair recedes into an M-shape.

It runs in the family line as baldness is hereditary. On the Norwood Scale, you’ll have a hair pattern that fits into Stage 4 onwards.

Contributing Factors to Increased Hair Loss and a Receding Hairline

Here are some of the leading causes of hair loss.

Hair loss is part of the natural process of aging.

Hair grows from hair follicles found on the scalp. As hair follicles are inevitably damaged by various reasons throughout life, hair loss occurs leading to increased hair loss and a receding hairline.

Natural hormonal changes are responsible for an acceleration of hair loss. A hormone found in males, DHT is associated with male pattern baldness by making the hair follicles contract to an extent that hair strands can’t grow through.

A case of temporal hair loss referred to as telogen effluvium may occur following an illness or high levels of stress.

The condition is characterized by the unusual loss of hair within a short period. Fortunately, the condition naturally corrects itself without the need for medical intervention.

Certain medical procedures have adverse side effects that can manifest in hair loss. A classic example is chemotherapy used in the treatment of cancer that may lead to loss of hair.

The lifestyle choices we make have an impact on hair loss. Not eating a well-balanced diet that’s rich in proteins directly impacts hair growth.

Taking a diet that consists of processed food, foods rich in saturated fats, sugar, and preservatives is not recommended for healthy hair growth.

Some hairstyling practices such as over-styling using heat, and using powerful chemical bleaches to color the hair.

Although there’s little you can do to prevent the hairline recession once it has kicked in, there are some medicinal remedies, therapeutic interventions, and home-based cures that can come in handy.

Even though the successful treatment of a residing hairline may not be guaranteed, these interventions can promote the growth of hair that’s full and blooming.

Read on to tackle a receding hairline.

1. First and Foremost: Visit a Dermatologist

For a proper diagnosis of the cause of hair loss, you need to visit a dermatologist.

Besides male pattern baldness, there could be other underlying issues such as stress or medication that are driving hair loss. Once these have been unraveled by a specialist appropriate and personalized treatment can commence. Be sure to use only approved drugs for your safety.

Disclaimer: None of the recommendations we make below should be used as a substitute for seeing a dermatologist or an authorized medical practitioner.

Consuming a diet that’s rich in antioxidants fosters the growth of healthy hair. Antioxidants help the body check oxidative stress in the body which can lead to hair loss.

Examples of such foods include kidney beans, leafy vegetables, walnuts, and other plant-based whole foods such as nuts and seeds.

The body requires a blend of minerals (iron and zinc) and vitamins (A, B-12, E) for healthy hair growth.

Foods like almonds and cashew nuts that are rich in zinc help to lower the levels of DHT in the body. (DHT is a hormone linked to hair loss.)

Massaging the scalp is thought to work by invigorating higher blood circulating on your hairline and stimulating the hair follicles located there.

Try it out by hand daily for about 5 minutes and you might just thank us later.

Stress has been proven to be a contributory factor to some forms of hair loss. By lowering your stress levels, you’re also doing your hair a favor.

Manage your stress levels by worrying less, exercising regularly, taking a break from work, and employing a host of relaxation techniques to cool off the pressures of modern living.

Accept Your Fate and Celebrate Your New Look

Even with a maturing hairline that threatens to recede further than you had anticipated, there’s a silver lining. And it starts with you celebrating the new look that you’re acquiring.

Come on, the man you look at in the mirror still looks cool and deserves to step out in confidence. A receding hairline shouldn’t take away anything from you. The choice is in your hands, not on your hairline. In any case, isn’t bald the epitome of a mature man?

With the application of an effective hair loss shampoo, you could delay the rate of hair loss. They’re easy to access over the counter without necessarily having a prescription.

A thickening biotin shampoo can help bring out impressive results on a maturing hairline.

Shampoos are not the panacea for male pattern baldness and that’s why some specialists have been skeptical about their use. But, they are known to work well when you’re dealing with scalp-related conditions.

Use hair loss shampoos, like ProBliva DHT Blocker Hair Loss & Hair Re-Growth Shampoo, together with biotin supplements and drugs such as finasteride or minoxidil.

There are some non-prescription drugs that you can buy over-the-counter for a receding hairline. Minoxidil is a common drug in this category.

For a receding hairline, herbal concoctions that are directly applied to the scalp are thought to promote healthy hair growth.

Alternative medicine experts have developed hair loss treatments from ginseng, aloe vera, and Chinese hibiscus. Mixing these remedies can create a soothing effect on the scalp and promote hair growth.

Your mileage may vary with herbal medications.

Hair transplants involve moving hair and grafting it to an area where thinning of hair or/and balding has taken place. The implanted hair grows to restore a hairline that’s complete.

When it comes to hair transplant, be sure to consult well with your doctor to ensure you are a fit for the operation and are aware of the risks involved.

Although it’s costly, the procedure is becoming more affordable.

(Need an example? Take a look at BOLDIFY Hair Fibers for Thinning Hair:)

Hair fibers are a solution albeit a temporal one if you look to cover up areas with thinning hair. All you need is to sprinkle the hair fibers where there is thinning. Hair fibers come in a range of colors to suit your preference.

However, applying the fiber requires some skill and practice.

Also referred to as red light therapy or cold laser therapy, low-level therapy stimulates the growth of hair by the use of laser.

It’s a painless procedure that’s considered safer compared to a hair transplant as it’s less invasive. Opinion among medical professionals as to its efficiency is still divided, as it seems to work with some people and not others.

A mature hairline is not something you should worry about. Whatever your hairline level, whether it’s a mature hairline, a receding hairline, or male pattern baldness, you can step out in confidence and embrace your emerging new look.

So, do you have a receding hairline? What stage is it? Have you accepted your fate or are you using any of the above-listed treatment options? Let us know what’s working for you in the comment section below.