From Old Bomb Shelter to Indoor Farm of the Future

As a result of all the war the region’s seen in the past century or so, Europe and the United Kingdom have their fair share of old bomb shelters. The structures which once saw so much use now sit abandoned, just begging to be converted into a data center, a mad scientists’ lair, a high-security storage room, or…a farm, apparently.

Deep below the streets of London, near the Capham North Underground Station, an old bomb shelter which once held up to 8,000 civilians during the London Blitz has found renewed purpose an environmentally-friendly and sustainable farm, thanks to the efforts of a new startup which goes by the name of Zero Carbon Food. The two entrepreneurs behind the venture – Richard Ballard and Steven Dring – are childhood friends who grew up on the rural outskirts of Bristol. Although they both went their separate ways, career-wise (Rich was a film director and Steven went into marketing), the two never lost the desire to return to their rural roots; rising food prices and a ever-increasing population cap would give the two the opportunity to do just that. 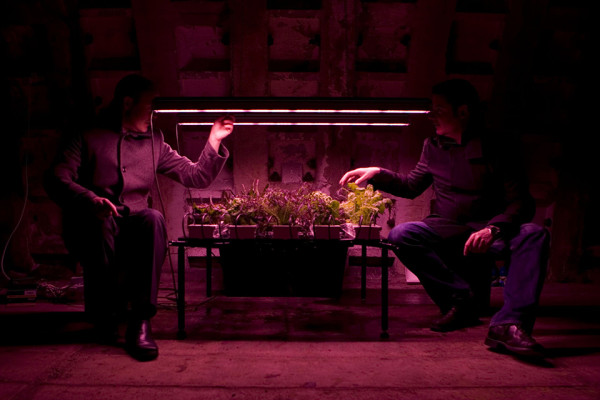 “We realized that the only way to feed the growing population was to do it without using any carbon,” writes Steven on ZCF’s About Us page. From there, it was about a year of research, putting in the hours learning about how we would produce vast amounts of food to feed London and do it without any environmental impact.”

Eventually, that research led them look downward. Beneath their feet, they realized, there was a potential gold mine for urban farming, in the form of London’s many unused bomb shelters. The two began making plans to grow their food using hydroponics and LED lighting – an idea which was, by all accounts, completely insane. Thankfully, the man who would eventually become their future supplier – Chris Nelson, described by Steven as “a growing genius – found himself intrigued by the idea, and the group immediately set to work. Together, they leased out the underground space, ripping out hundreds of unused bunk beds and replacing them with their hydroponic farms. 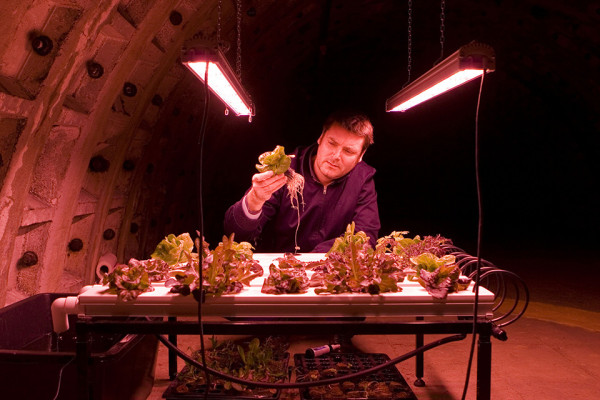 They are, by all accounts, an incredibly strange sight. Illuminated only by the purplish-pink LED lights, the farm looks more like some sort of space-age laboratory than a food-source, and it’s hard to believe they’re able to grow anything in such a place. But they are – their farms are slated to produce peashoots, arugula, radish, red lion mustard, tatsoi, pak choi, and miniature broccoli (to name a few); all with an effectively nonexistent carbon footprint.

Not only that, this farm is almost down the street from the many restaurants and food vendors it intends to serve, so transportation costs are cut down vastly, as well.

Already, they’ve got at least one chef onboard. 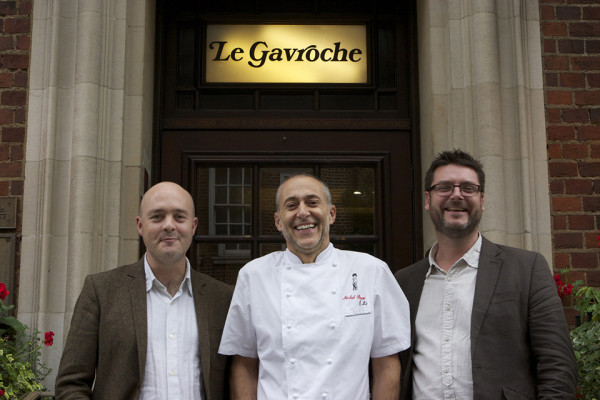 “When I first met these guys, I thought they were absolutely crazy,” two Michelin-star chef Michel Roux told Gizmodo, “but when I visited the tunnels and sampled the delicious produce they are already growing down there, I was blown away. The market for this product is huge.”

It is indeed. It’s a rather strange thought, isn’t it? As much as we’ve clamored for sustainable agriculture, as much as we’ve looked to obtuse new technologies for the answer, the solution’s been beneath our feet all along. It just needed the right people to find it.

Update— In October 2015, Zero Carbon Farms announced a successful crowd-funding campaign that raised over $400,000 to help build out the next phase. This exciting concept is about to become a a working prototype.

Rooftop Farming: the Next American Frontier 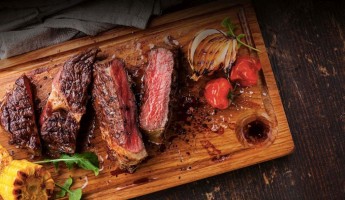