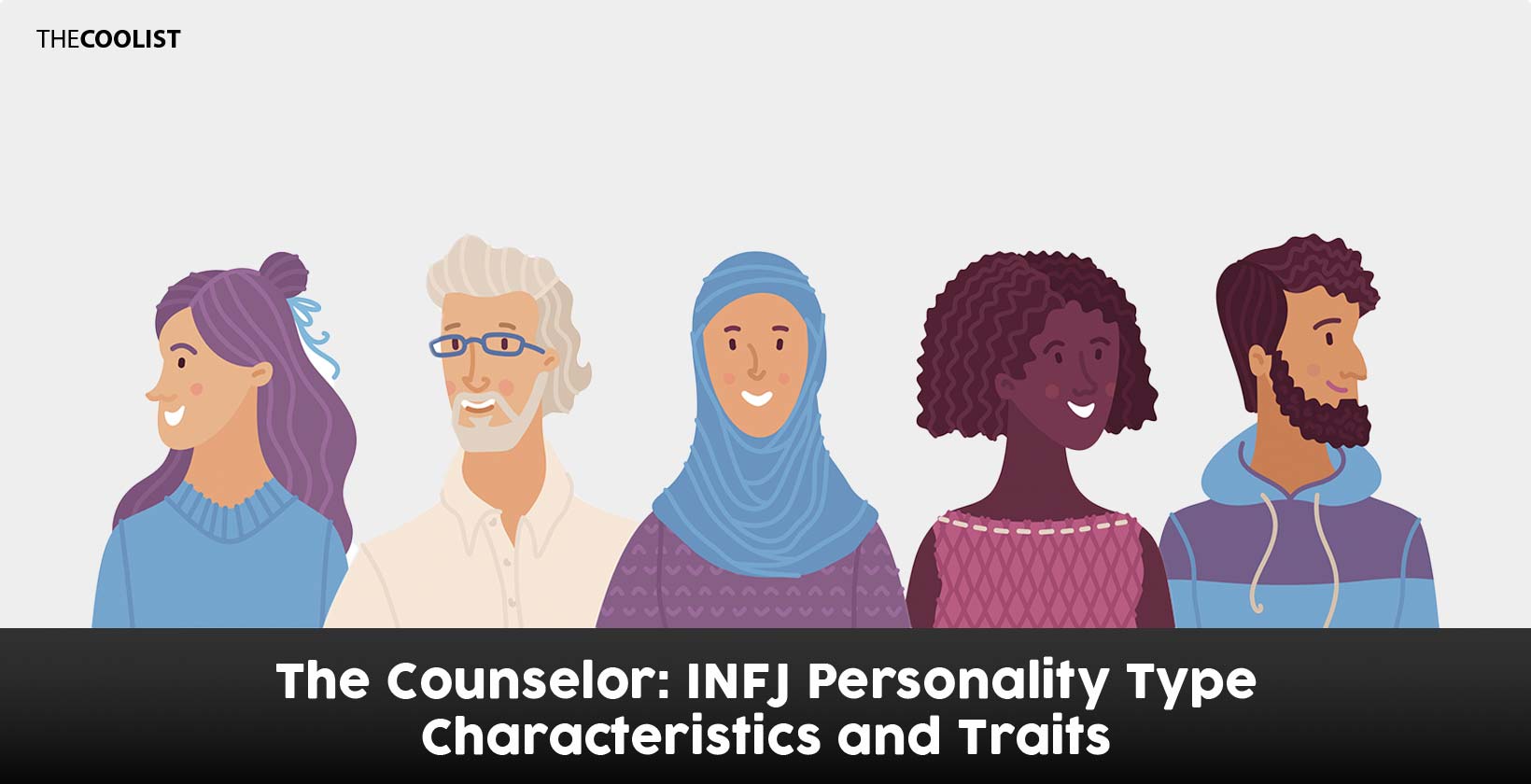 INFJs are excellent listeners and keen observers, and these qualities have earned them The Counselor moniker. INFJs are also called The Advocate because seeing the good in people motivates them to advocate for the less fortunate. These qualities stem from three main INFJ characteristics. First, INFJs are insightful. Due to their intuition, Counselors are great at connecting the dots and seeing patterns that others may miss. Second, Counselors are highly focused, largely thanks to their passion for improving the lives of others. Third, INFJs are empathetic, a trait that makes them hyper-aware of other people’s emotions.

One of the core strengths of an INFJ personality is their unwavering belief in the greater good. INFJs want to make the world a better place and believe it is possible. The Counselor’s preoccupation with changing the world keeps them from celebrating small victories, a key weakness of the INFJ personality type.

INFJ women are more common than INFJ men. That said, both gravitate toward career paths where they can make a difference such as in social sciences, healthcare, or education.

What does INFJ stand for?

INFJ stands for Introversion, iNtuition, Feeling, and Judging. INFJs are quiet people who observe the world around them. As the Counselor personality type, INFJs make insightful comments thanks to their excellent listening and observation skills.

What are the INFJ traits?

Below are four common traits of INFJ personality types.

What are the INFJ strengths?

Below are four INFJ strengths.

What are the INFJ weaknesses?

Below are four INFJ weaknesses.

What are the career paths for an INFJ?

The best career paths for an INFJ are those focused on helping people live better lives. Below are four examples of ideal INFJ career paths.

In addition to the professions above, you can learn about more careers that match your MBTI type through the career personality profiler.

How does an INFJ prepare for a job interview?

To prepare for a job interview, INFJs should follow the five steps below.

What career paths should INFJs avoid?

What are the statistics for INFJ personality types?

Statistics for INFJ personality types show they are uncommon, with The Counselor accounting for just 4.8% of the population. INFJs are typically found in creative or altruistic pursuits, such as writing or therapy. The gender distribution of the INFJ is heavily slanted towards women. Approximately 5.6% of women are INFJs, while only 2.5% of men identify as INFJs. The INFJ gender distortion may explain why most Counselors gravitate toward nurturing roles within female-dominant workforces.

Who are some examples of INFJ celebrities?

Below are some examples of INFJ celebrities.

What are some INFJ quotes?

Below are some INFJ quotes that exemplify the Counselor’s altruism and world views.

What are the INFJ subtypes?

The two INFJ subtypes are Assertive INFJ (INFJ-A) and Turbulent INFJ (INFJ-T). INFJ-As and INFJ-Ts share the core traits of the Counselor but subtle distinctions separate the two subtypes.

The core difference between an INFJ-A and the INFJ-T is the way they deal with everyday stressors. Compared to the INFJ-T, assertive INFJs are better at dealing with stress and navigating difficult situations. One notable strength of the INFJ-A is their ability to leave the past in the past. While failure annoys assertive Counselors, they do not linger on what-ifs. Instead, INFJ-As learn from their mistakes and ensure they don’t make them again. One particular weakness of the INFJ-A is their burning desire to do something extraordinary. The assertive INFJ’s determination can become all-consuming and cause them to lose sight of small but crucial victories.

The INFJ-T personality is more likely to second guess themselves than INFJ-As. The core difference between the two subtypes is that INFJ-T sees their lack of self-confidence as a reason to become a better version of themselves. One key strength of INFJ-Ts is their ability to work under extreme stress. While many may crumble under pressure, the Turbulent INFJ perseveres and adapts to stress. On the other hand, one common weakness of the INFT-T is that they are more likely to get hurt in relationships. Turbulent INFJs believe in true love, and as such, may struggle to find what they are looking for. INFJ-Ts are also more likely to struggle after a breakup.

How to compare the INFJ subtypes to each other?

The best way to compare the INFJ subtypes to each other is to analyze their features. Below is a table comparing INFJ-A (Assertive) vs INFJ-T (Turbulent).

What are the interactions between INFJ personality type and others?

Interactions between INFJ and others are slow at the start but evolve to include close and effective relationships. For example, it may take a while for strangers to get to know INFJs due to their introversion. INFJs won’t open up to new people right away but will reward loved ones with loyalty and affection.

Although introverted, INFJs appreciate and desire close relationships. They also often lead active social lives. Counselors enjoy spending time with friends and having fun, though they’re unlikely to arrange get-togethers or dates. INFJs have a low social battery and will retreat to recharge once they’re socially spent.

Within the workplace, INFJ types are good leaders, but they’re seldom seen in a direct position of command. Instead of giving orders, INFJs prefer to offer quiet direction, insightful wisdom, and advice to those who ask. INFJs are good listeners and excellent communicators. As a result, INFJs are responsible students and dependable colleagues.

How to communicate with an INFJ personality person?

To communicate with an INFJ personality person, keep the following five tips in mind.

How does INFJ behave in a relationship?

There are two distinct behavioral stages in INFJ relationships. The first stage can be slow-moving because INFJs take a while to warm up to someone. In the second stage, the INFJ will transform into an attentive, sensitive, and deeply caring partner. After they open up in a relationship, INFJs start looking for a perfect love story. Sensitive to their partner’s needs, INFJs devote themselves to their significant others and seek the same in return. Sadly, however, this profound loyalty can often result in heartbreak, as expectation and reality rarely meet.

“Even if you are someone used to wearing armor, guarded and afraid, I think love is such a strong force it would find a way through your protective guard. It will get to your heart, and you can’t put any fences around that. As much as you might try, you simply can’t.” – Sidney Poitier

How is the INFJ personality in parenthood?

“If you want to inhibit kids’ growth, keep telling them they are smart. If you want to give compliments and nurture growth, praise their curiosity and efforts.” – Unknown

How productive are INFJ business people?

INFJ business people are productive, but they can lose focus in the pursuit of perfection. Due to INFJs’ distaste for a rigid structure, you’re unlikely to find many INFJ types trapped in an office job. Nothing hinders the motivation and productivity of INFJ types quicker than endless amounts of red tape and office politics.

How efficient are INFJ science people?

INFJ science people are highly efficient, particularly within social science. INFJs’ preference for human sciences stems from their general interest in the human condition. Conversely, INFJs have little passion or patience for the study of facts and details such as within physical sciences. Furthermore, the rules and strict parameters associated with physical sciences (even within the realms of experimentation) stifle the passion and creativity of the INFJ. These constraints reduce INFJs’ efficiency in the study of non-organic matters.

“It is through science that we prove, but through intuition that we discover.” – Henri Poincare

How are the genders of INFJ personality?

How is the INFJ female personality?

The INFJ female personality accounts for 5.6% of the female population. INFJ women are creative, quiet, and maintain several close friends but few casual acquaintances. You will be hard-pressed to find a personality more intuitive than INFJ women. As a result, female Counselors can be great people to talk to. Although their sensitivity may lead to heartbreak, INFJ women are empathetic, reliable, and romantic.

How Is the INFJ male personality?

The INFJ male personality accounts for just 2.5% of the male population. Because of the INFJ personality’s strong femininity, others may see INFJ men as feminine. In somewhat of a contradiction, male INFJs enjoy being social, though they don’t like letting people get too close to them. INFJ men are romantic but struggle to settle down due to their exceptionally high standards.

What are the strongest signals that someone is on INFJ?

Below are the five strongest signals that someone is an INFJ.

How to understand whether you are an INFJ or not?

To understand whether you are an INFJ or not, see if you agree with the statements below.

In addition to the aforementioned questions for self-assessment, you can also learn more about your personality with a personality type test.

How to classify personality types for INFJ communication?

What are the main similarities between other personality types and INFJs?

The main similarities between other personality types and INFJs include idealism, intuition, and thoughtfulness. INFPs are most similar to the INFJ, sharing characteristics such as compassion, creative thinking, and a generally reserved nature. Additionally ENFJ and INFP both share the same idealistic traits as the INFJ. Helping others is also important to both the INFJ and the INFP. Furthermore, ENFJ, INFP, and INFJ types understand the importance of listening and not jumping to conclusions. These three personality types rely on observational intuition, making them the moral backbone of most friend groups.

What are the kindred personality types for INFJs?

Below are the four kindred personality types for INFJs.

What are the most friendly personality types to INFJ?

Below are the four most friendly personality types to INFJ.

What are the main differences between other personality types and INFJs?

There are three main differences between other personality types and INFJs. The first difference is INTJs’ outlook on life. Whereas personality types like ISTJs are traditionalists, INFJs are open-minded visionaries who want the world to change. The second difference is in INFJs’ communication style. INFJs are polite and respectful, whereas INTJs are often brush and blunt. The third difference is in INFJs’ approach to planning. Counselors are well-organized people who like to think ahead, whereas other personalities (such as ISFP) live their lives spontaneously.

What are the opposite personality types to INFJs?

Below are the four opposite personality types to the INFJ.

What are personality types are the most different from INFJ?

Below are the four personality types that are most different from INFJ.