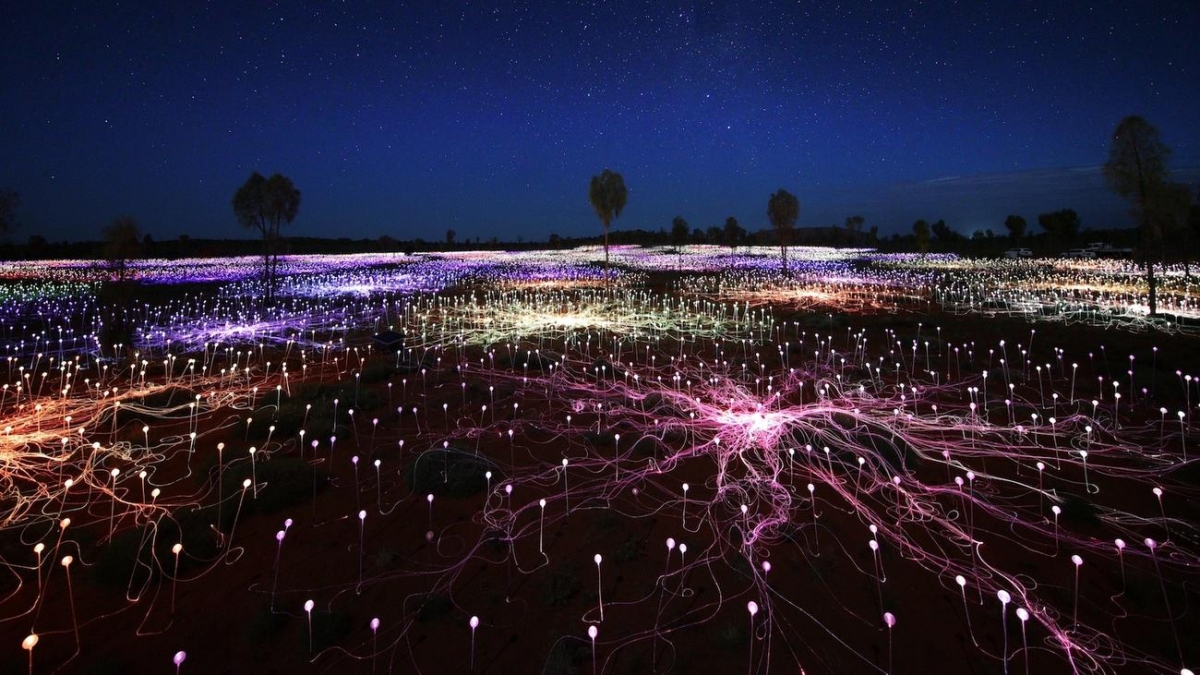 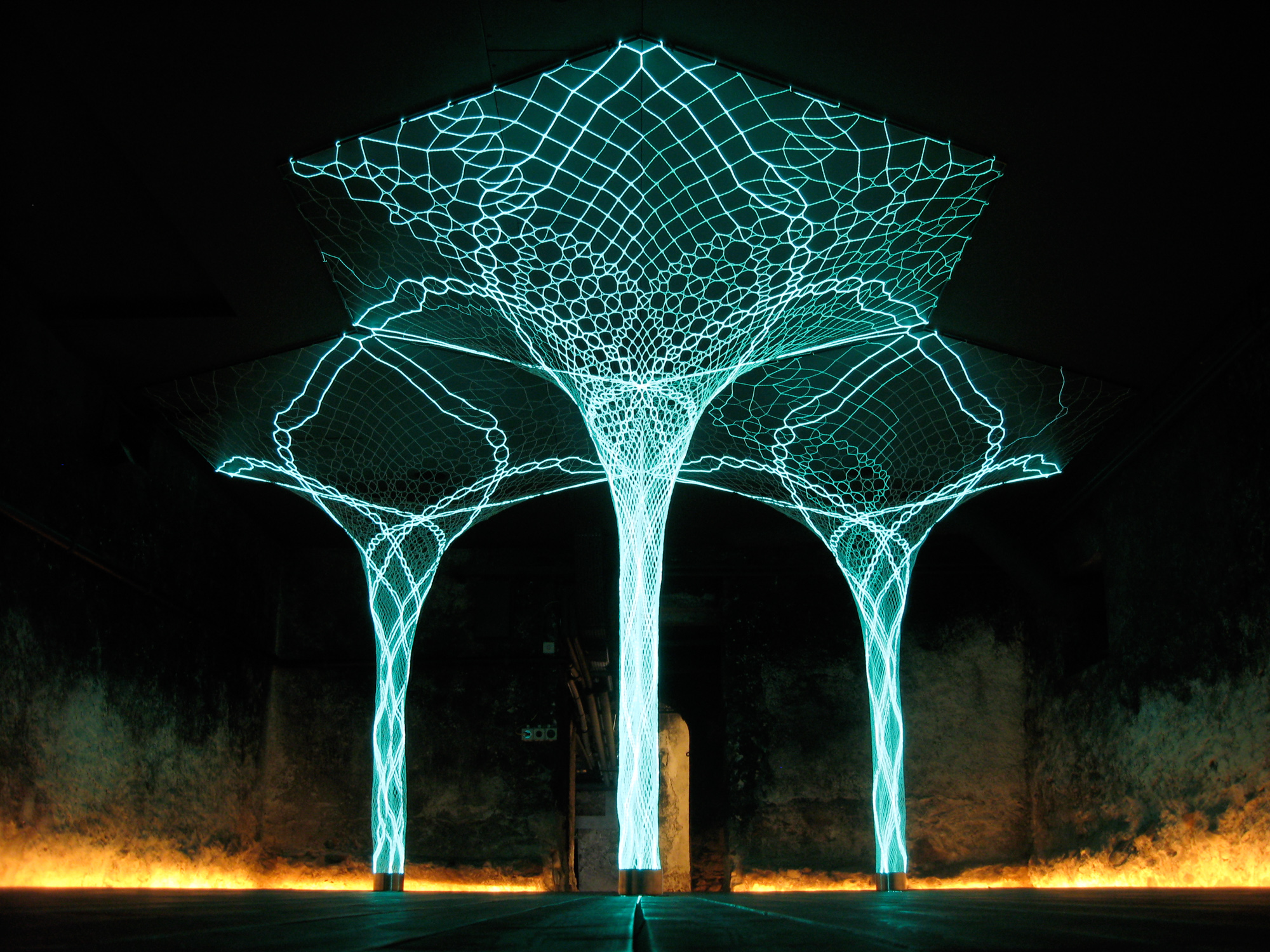 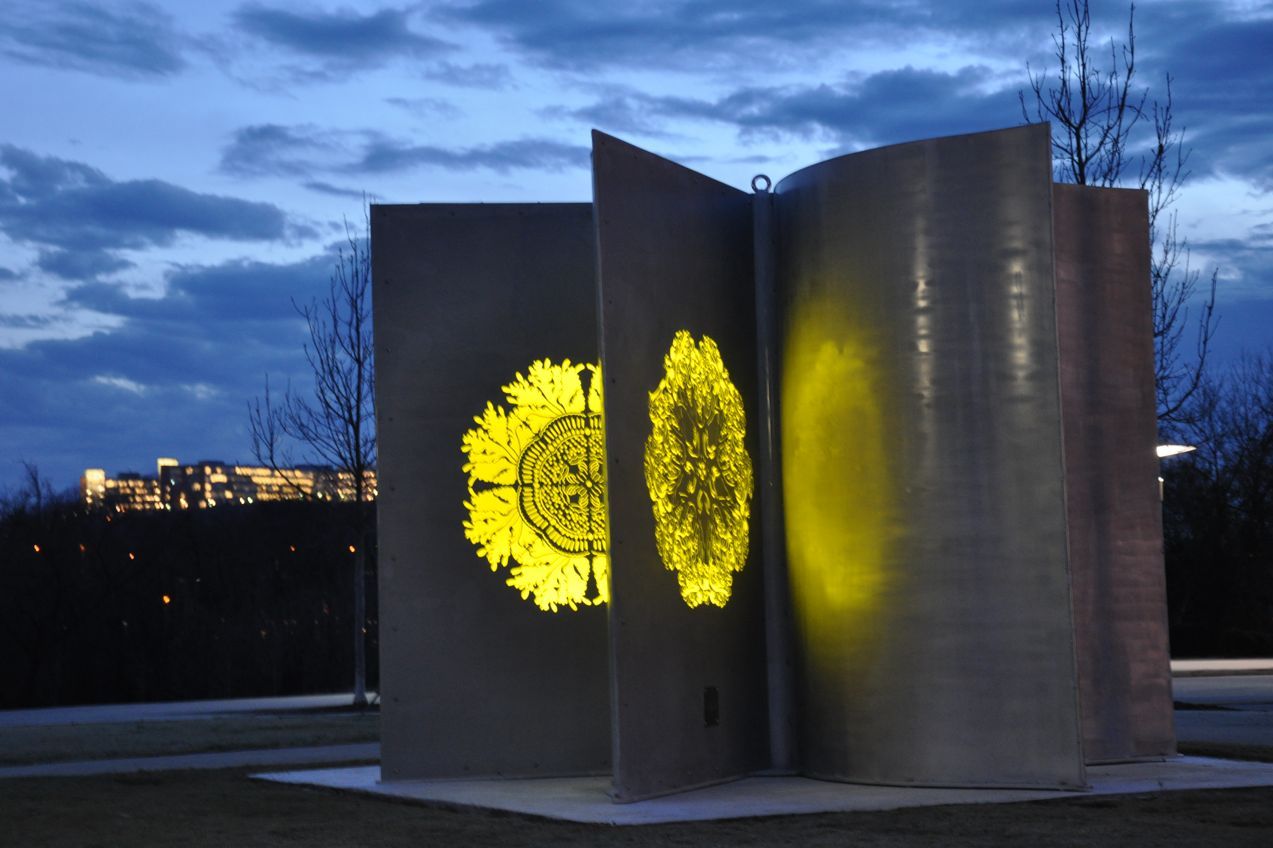 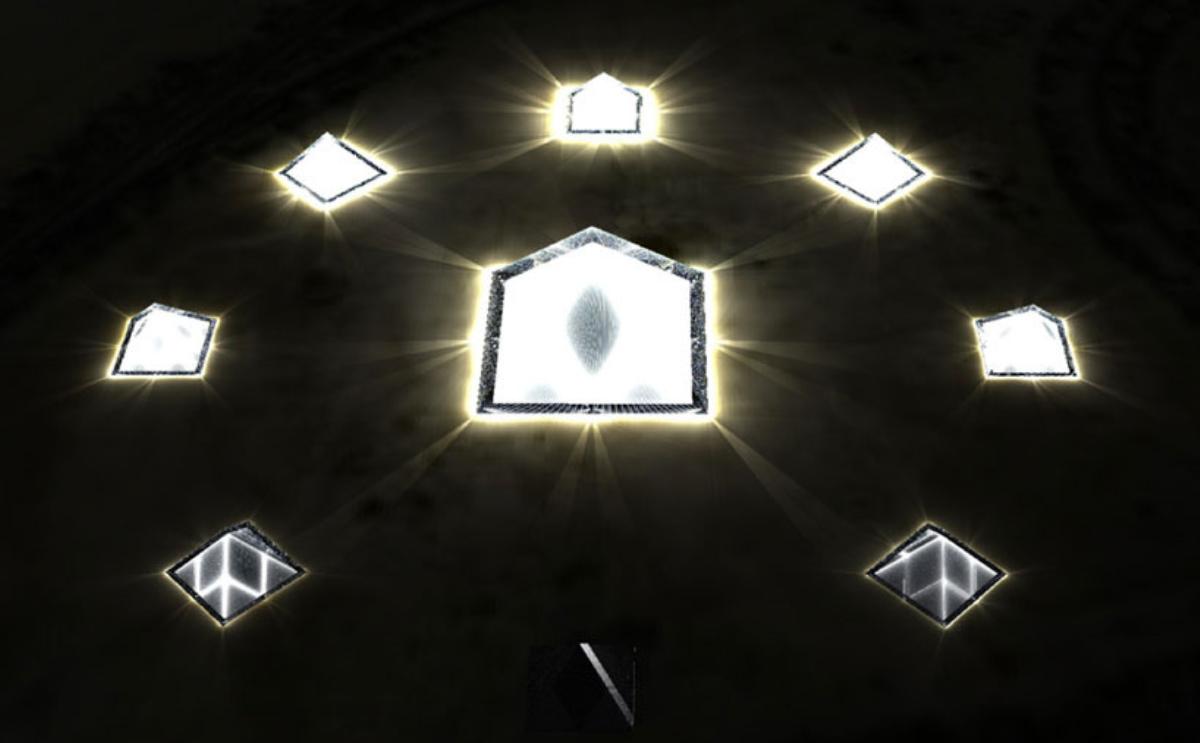 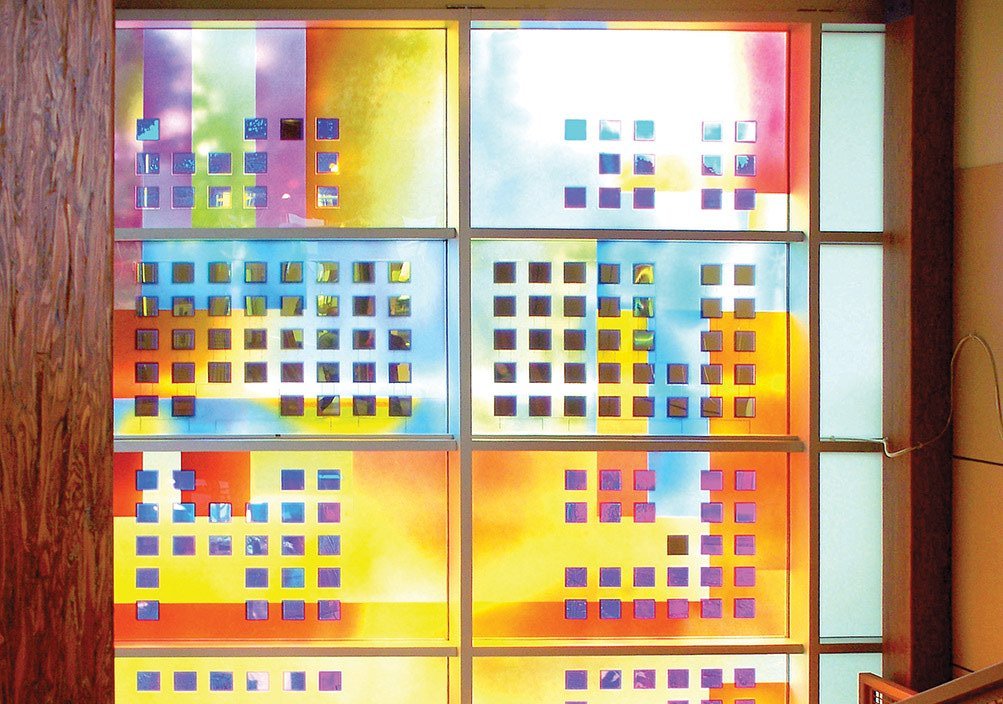 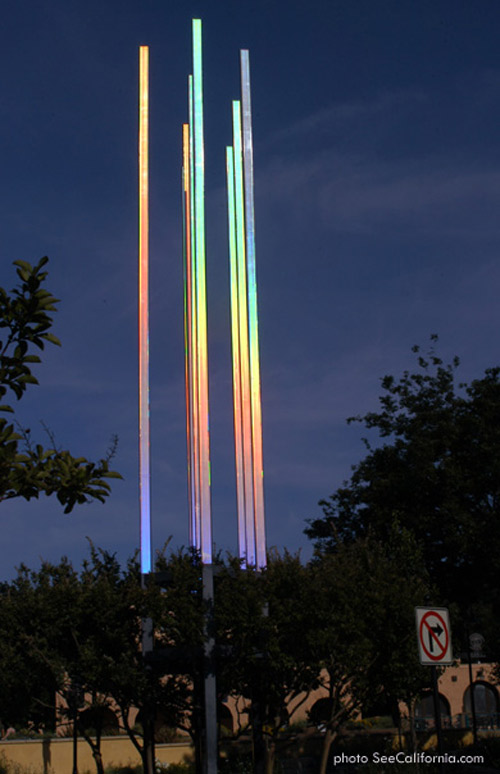 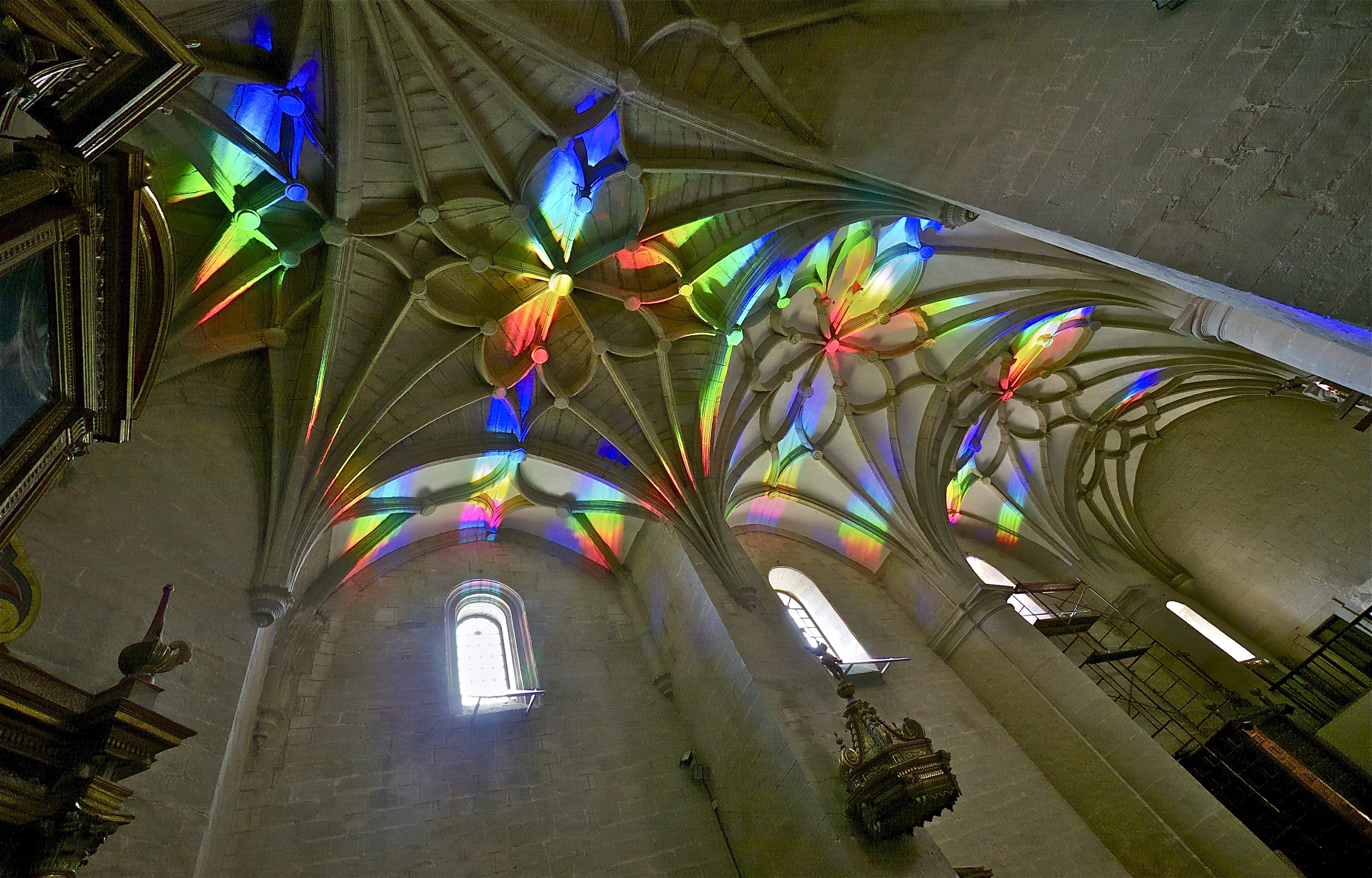 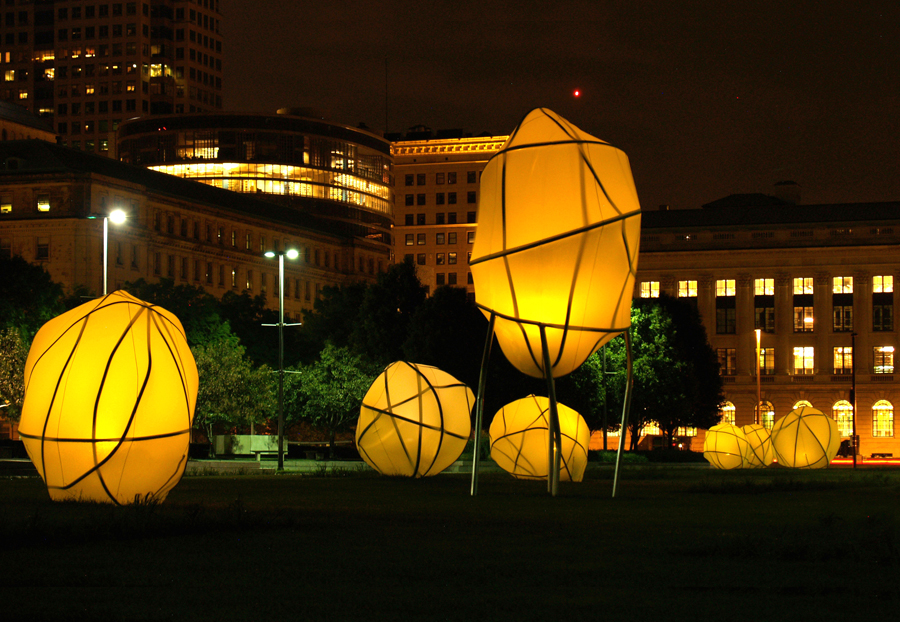 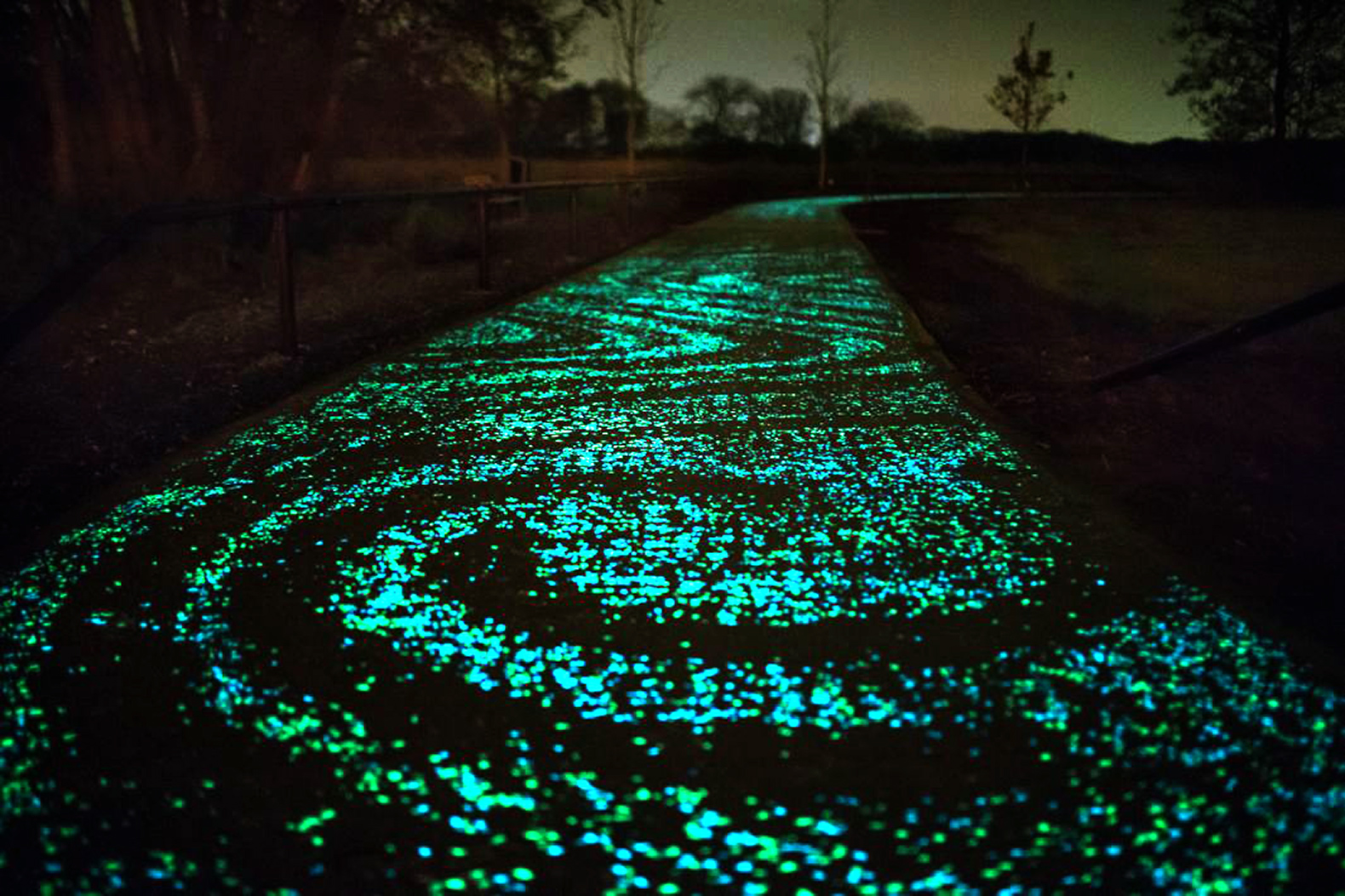 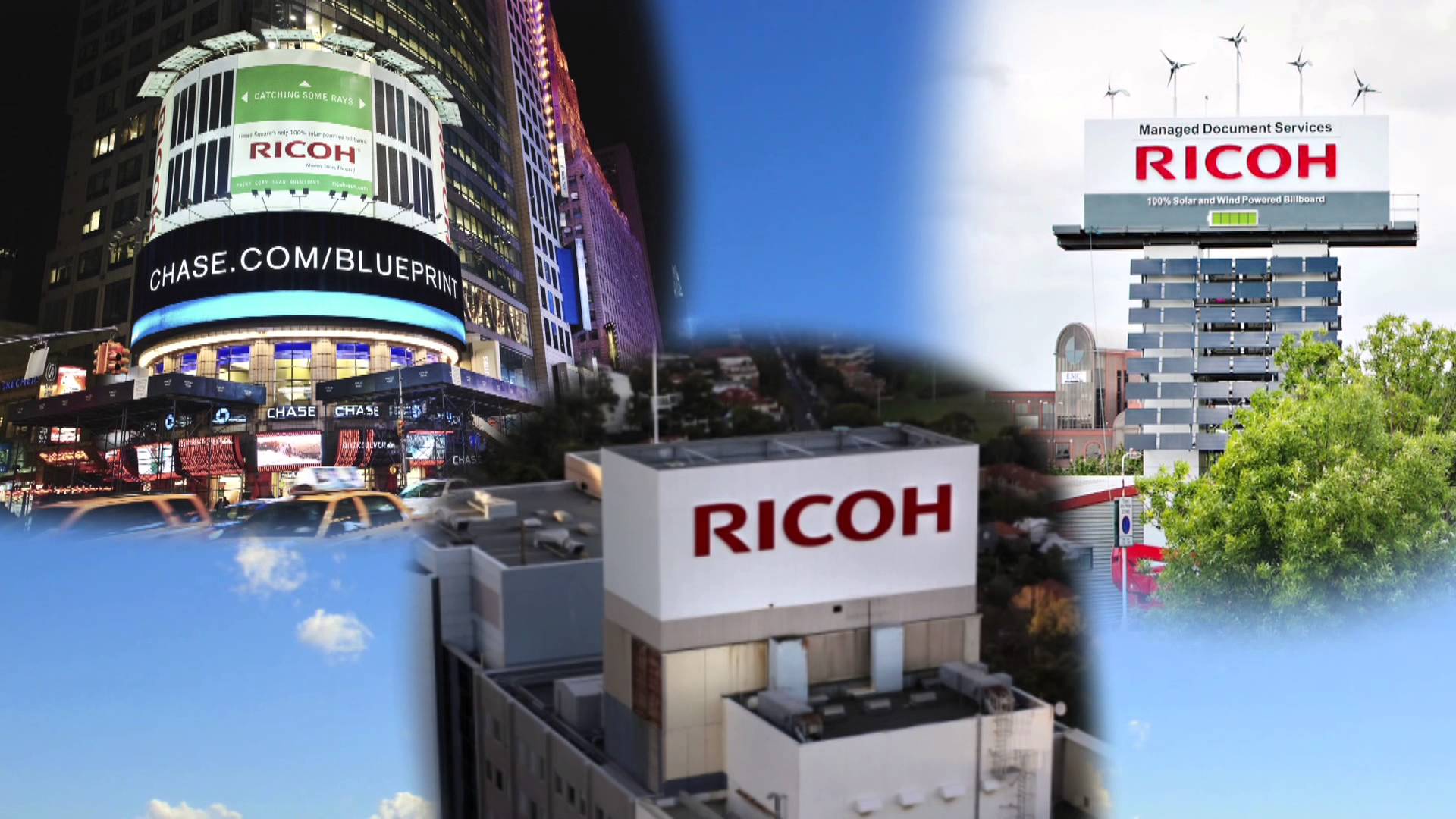 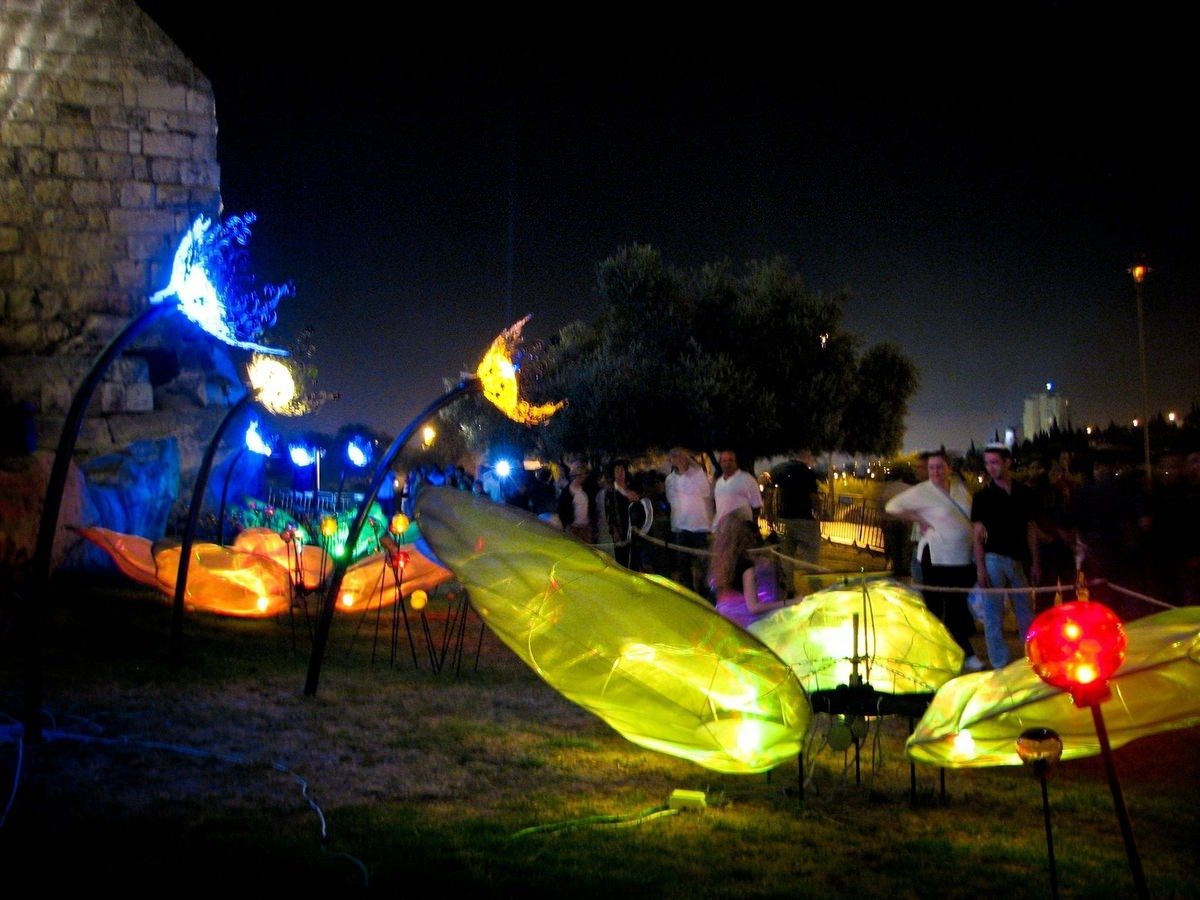 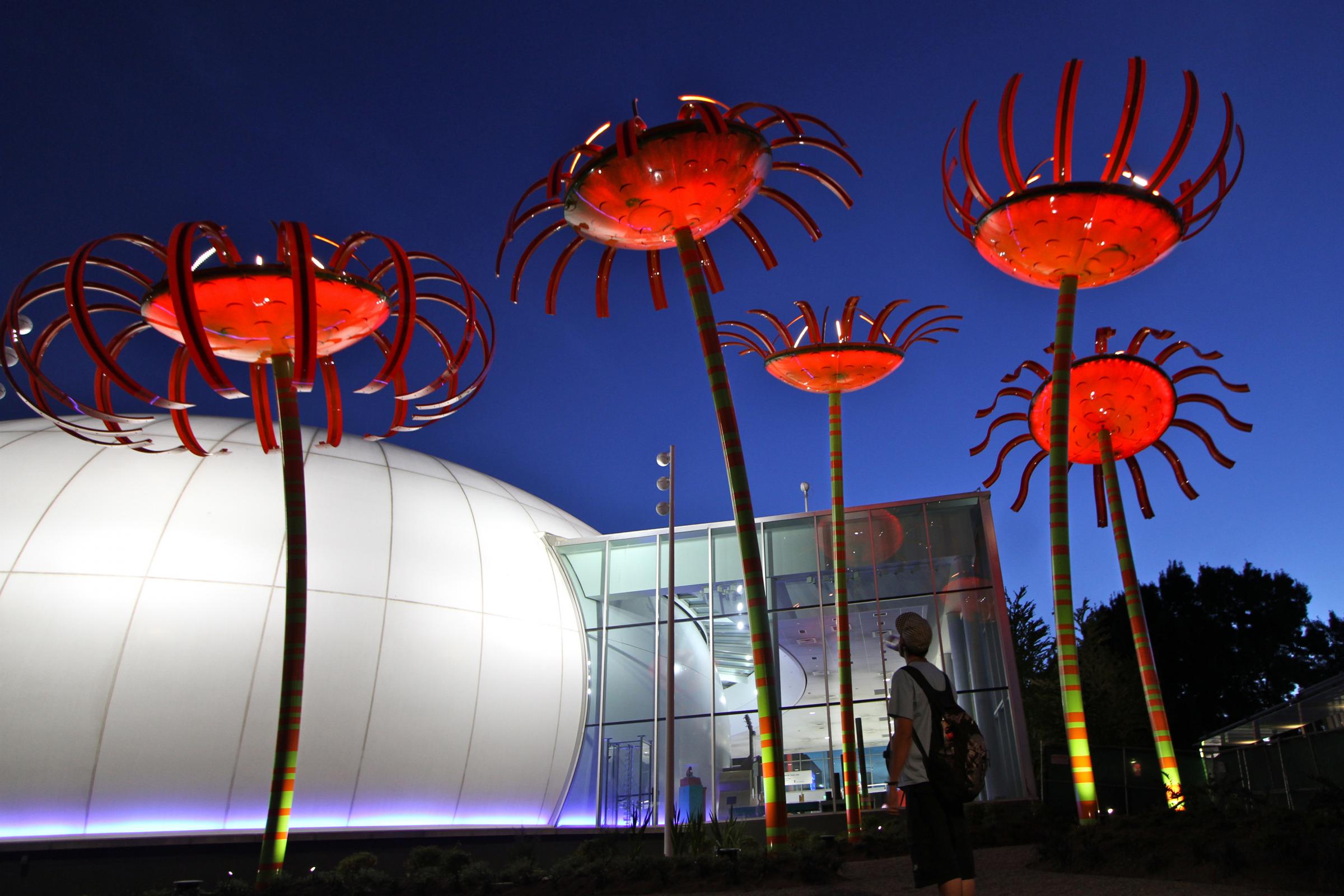 Solar power is a wonderful way to harness the nuclear energy of our nearest star, but it’s more than that. It’s a new way of life that promises a brighter future – pun intended – helps eliminate smog, strip mining, and the burning of fossil fuels. Yet, it’s still more. In itself, solar power is a work of art as much as it is a science. It’s a celebration of green energy and human endeavor, melded together and working in harmony with the entire universe.

To honor Sol – the fiery ball in the sky that lets us live each day, and sometimes burns us to a sweet lobster red – we thought we would share some dazzling, mind-bending solar bulb installations and works of art all about the sun.

Located in the gloomy Pacific Northwest, Sonic Bloom absorbs the sun’s power, acting as an ordinary, run-of-the-mill installation of giant flowers during the day, then becomes a gentle show in the evening. Lovely and thoughtful, it proves the utility of solar even in places where the sun don’t often shine.

A show of light that was unveiled at the 2009 Jerusalem Light Festival, the Night Garden is a set of a variety of flowers. During the day they lie dormant, picking up solar energy. When twilight falls, they come alive in a variety of LED colors. All shapes and sizes, the flowers not only illuminate the area, but open and close, adding a kinetic element to the visual spectacle.

Though perhaps lacking somewhat in visually arresting artwork, these three solar bulb installations prove that advertising doesn’t need to drain our resources. Each of these displays, set in London, New York, and Sydney, is powered completely by renewable energy. They use a combination of solar and wind to be 100% sustainable, while still selling Ricoh products as effectively as any power-sucking ad.

Meant to be evocative of Vincent Van Gogh’s masterwork Starry Night, this solar bike path uses a combination of panels and lights to create the swirling patterns. Intended to not only power itself, but to provide energy to nearby homes, the project promises to be as utilitarian as it is beautiful, showing what is possible with practical solar.

Rather than using solar panels, each of the wire sculptures has solar fabric stretched across it, which creates the seed pod effect even as it picks up the sun’s rays. During the day, the solar bulbs are a pleasing green shade, with the gentle illumination coming out to highlight the idyllic surroundings. It’s arguably one of the most beautiful things about the industrial city of Cleveland.

The Ecstasy of Santa Lucia by Peter Erskine

The solar art of Peter Erskine doesn’t use panels to power bulbs, rather it is a mixture of prisms and mirrors that pick up the natural spectrum of light coming from the sun and then use it to highlight architecture and make beautiful pieces that change as the sun moves. Reds, yellows, oranges, blues, and violet hues all come through his works. Nowhere is the blend of construction and light play used better than in the St. Lucia church where secular science adds holy glory to the house of God.

A display in Austin, Texas, Sunflowers proves that an installation of solar panels intended for public power need not be an eyesore. These glorious, glowing trees offer light at night while sucking in power, and give patches of shade during the day. The combination is a set of electric trees that would be perfect if only they offered free WiFi and turned CO2 into oxygen.

70 feet tall, each of these pillars is nothing more than a chunk of steel painted with a specialized adhesive and then covered in solar paneling. Mixing in perfect harmony with the natural world around it, they appear a clean, clinical white during the day, with changing light patterns causing them to take on new facets even as they pick up power.

Naturally, the sunshine state has earned a piece of solar installation artwork from sustainable creator Deedee Morrison. The metal is recycled aluminum with yellow lucite comprising the panels that give Sun-Catcher its amber hue. It not only lights itself, but feeds power back into the grid of Clearwater, Florida so that no sunshine goes to waste.

What good is making art if it can’t also be mildly disconcerting? Alexandre Dang has been fascinated by solar energy, but rather than creating light out of light, he prefers to incorporate movement that comes from the power of sunlight. This field of sunflowers whirls whenever light hits it. Several similar items are available for home purchase, should you want a synthetic flower that dances to salute the dawn.

The Science of Light by Sarah Hall

What you’re viewing here is actually revolutionary. Artist Sarah Hall uses stained glass with PV panels placed between them to create sustainable windows that sparkle with varying colors and tints, which add beauty wherever they are, but also bring added power to whatever home or building they are placed into. They can even work standing free.

Rising out of the Abu Dhabi sands, this set of pyramids improves on the traditional architecture popularized by the Egyptians by adding a solar component. Hundreds of homes are powered by these structures, which are as beautiful and ethereal as their ancient counterparts, though far more useful than merely housing a pharaoh’s bones.

The second beautiful item from Deedee Morrison, the Seed-Pod is a combination of the masculine metal of steel with the organic glory of a seed blossoming with new life. Borrowing heavily from drawings by naturalist Ernst Haeckel, it shows how a seed looks moving from dormancy into activity as it grows into a bloom.

While it looks like a copse of trees, or perhaps bottled lightning, Sonumbra is in fact a textile that is solar cells and LED lights working in concert. Equipped with motion sensors, the sculpture responds to human presence with light and sound, creating an interactive experience that astounds every time.

Predictably based in Portland, the Silicon Forest gets its power the same way as actual trees, by employing branches near the top that pick up sunlight. They then dispense it to stunning effect.

Field of Light by Bruce Munro

More than 50,000 solar-powered bulbs are woven together in this ambitious light show taking place night after glorious night in Australia. Romantic, strange, alien, yet elegantly simple, it’s scope is as ambitious as the message: Sustainability is here.