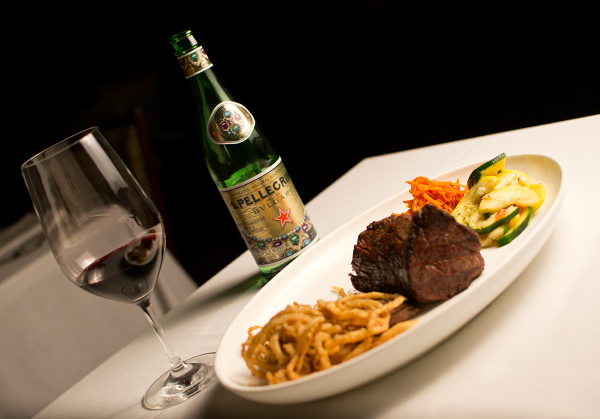 On the road map of great American cuisine, Bern’s Steak House is a truly premier destination.  Famous for its dry-aged steaks, world-leading wine selection and private dessert room, Bern’s is a beloved retreat for dignitaries, celebrities and foodies alike.  It’s been called the best steak house in the United States.  It boasts a collection of wine larger than any other restaurant in the world, currently housing nearly 600,000 bottles in its cellar.  TheCoolist recently visited Bern’s Steak House in Tampa, Florida to experience it for ourselves, and to see if this culinary institution can live up to its lofty acclaim. 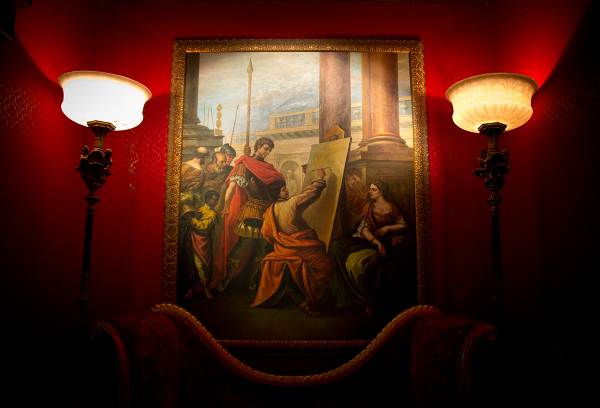 Stepping into Bern’s Steak House is like entering a different world.  Its interior is refined, elegant and decidedly classical, lined with fine art that feels to be as carefully curated as its wine list.  The curator in this case is Bern Laxer, founder of Bern’s Steak House, who opened the restaurant in 1956 with an appreciation for great food, fine wine and organic farming.  Long before farm-to-table was the phrase du jour, Laxer sourced most of his vegetables from an organic farm that still supplies much of the restaurant’s produce today.  Bern Laxer passed on in 2002, leaving the restaurant to his son David who has continued Bern’s commitment to the food, wine and fine dining experience that made it famous. 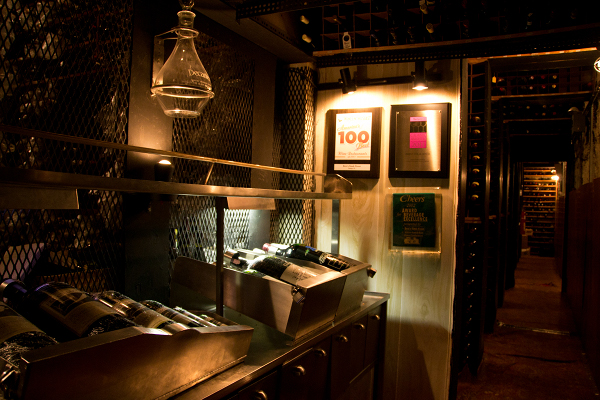 What first attracted us to Bern’s Steak House was its wine cellar.  Adjacent to the kitchen and in the warehouse next door, Bern’s houses nearly 600,000 bottles of wine from recent vintages all the way back to the 18th century.  That includes a bottle of 1947 Chateau Latour which can be yours for just $30,000.  No other restaurant in the world can boast such a large wine collection– and the second largest is a hundred or two thousand bottles behind.  Bern’s wine collection and the cuisine it accompanies has earned Bern’s Steak House the Grand Award by Wine Spectator Magazine for 30 straight years.  During that stretch, in 1996, Wine Spectator named Bern’s the best steak house in the United States. 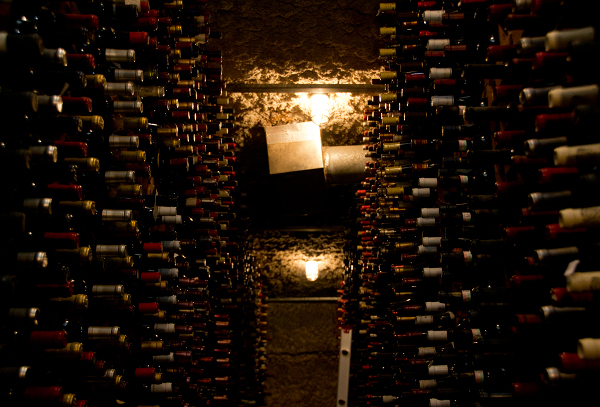 All of this acclaim set the expectations quite high for our visit to Bern’s Steak House.  We explored the wine cellar, followed the steaks from dry age to grill, and tasted the experience that makes Bern’s special.  To start, we pored over the extensive menu of appetizers, caviar, steaks and additional entrees.  For a steak house, the variation of this menu was surprising.  It opens with an observance of a gluten-free diet.  It caters to vegetarian preferences.  It even features sushi– not as a gimmick, but another way to showcase this restaurant’s fine seafood and tenderloin. 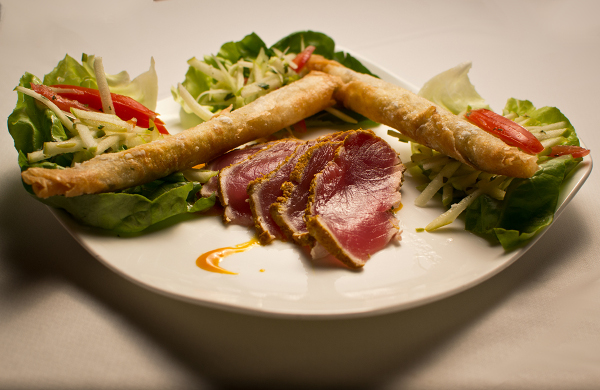 Obviously, we were here for the steak.  The menu provides a helpful guide to the different cuts of steak, the sizes available and options for preparation.  We opted for a 2″ thick Special Chateaubriand, dry-aged for seven weeks and prepared medium rare.  If this cut is new to you, think of the Chateaubriand as a larger Filet Mignon, cooked on its side.  While our steak was prepared, we enjoyed the Bern’s Spicy Seared Tuna appetizer, which includes shiitake scallion “firecrackers”, green papaya salad and a spicy mango coulis.  This was followed by Bern’s soup trio, including a French Onion soup which had been cooking for over 24 hours, a rich Lobster Bisque and a cool Vichyssoise. 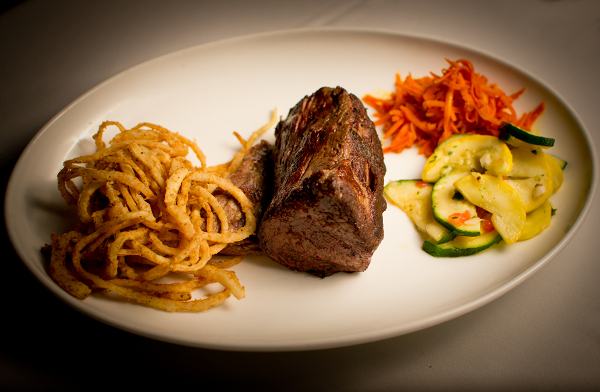 Then the main event arrived.  Alongside those steak house onion rings and vegetables from Bern’s farm was our 2″ Special Chateaubriand.  We laid our knife on the grain and lightly pulled it toward us– and this magnificent steak opened like a theater curtain.  It was the most tender and flavorful steak we had ever experienced, to the point that our grocery store rib eye will never be the same.  This whole process, from dry age to chopping block to grill had yielded something we now want to mark every special occasion with.  While we still had quite a ways to go to explore Bern’s further, we had understood just why this restaurant was held in such high acclaim. 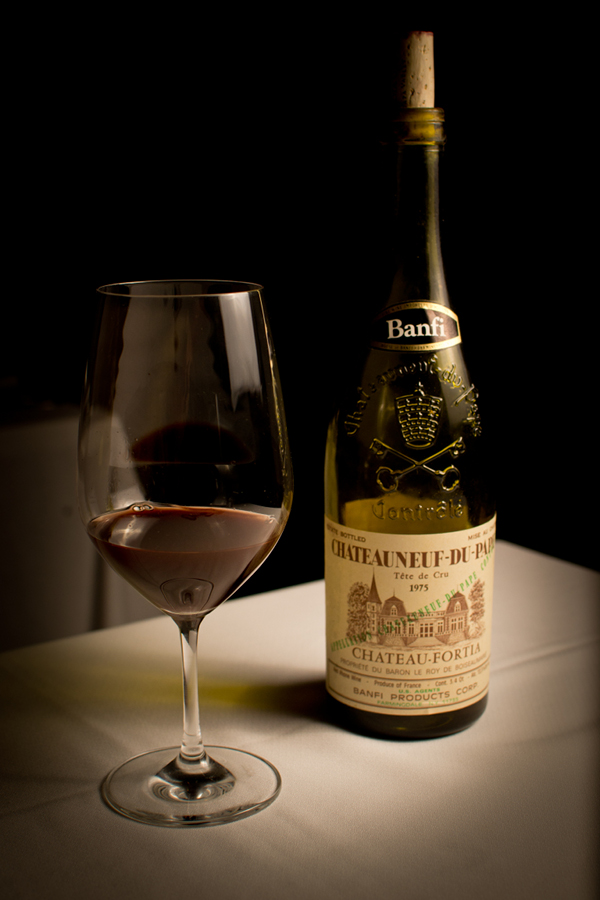 Then there’s the wine.  At any given time, Bern’s Steak House has nearly 600,000 bottles of wine ready to be opened on site.  Its list alone includes 6,800 different labels with 150 available by the glass.  Our favorite was the 1975 Chateau Du Pape from the Rhone region of France.  It was a full-bodied, spicy red with visible sediment that gave it an orange rim, almost bloody in color.  The surprise is that a wine like this can be affordable at Bern’s.  A five ounce pour of the 1975 Chateau Du Pape would run $14.95 on today’s menu.  As noted above, however, even the most expensive taste can be satisfied from a wine menu like this. 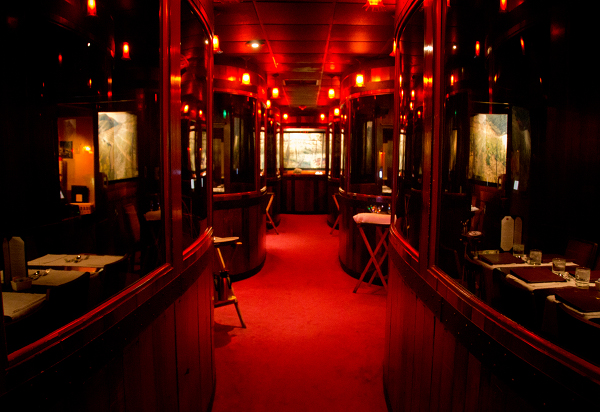 After dinner, guests are treated to a tour of the kitchen, the wine cellar and an optional table at the Harry Waugh dessert room upstairs.  The dessert room was added in 1985, featuring 48 private dining booths built into large redwood wine casks.  This is an experience in itself with a menu to match.  Three pages of desserts and an extra page of coffee options joins a 39 pages of wine and spirits.  This includes ice wines, ports, cognacs, cordials and more, all set to pair up with handmade chocolate treats and other desserts of a wide variety. 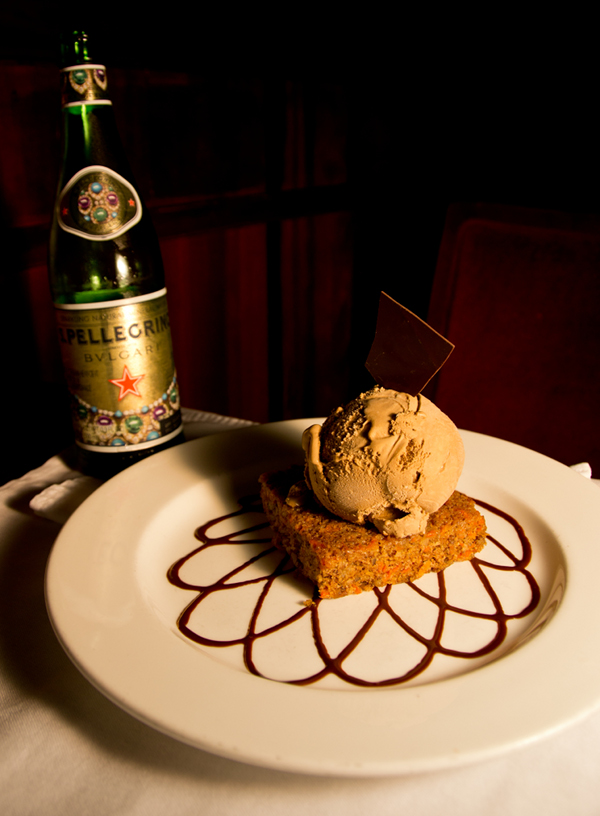 We selected the King Midas, a moist carrot cake with macadamia nut ice cream over a dark chocolate sauce.  It tasted precisely as good as it looked, the ideal cap on a truly excellent dining experience.

That’s the point we have to emphasize about Bern’s Steak House.  This restaurant is a welcome departure from what most of us see as a “dining experience”, where get-in/eat/get-out is the recipe for guest and chef alike.  A typical experience at Bern’s would last longer than two hours– starting at the dining table (or the lounge before that), continuing on to a tour of the kitchen and wine cellar, then finished over dessert in a private room upstairs.  This is dining as entertainment, an experience that brings people together over a truly phenomenal meal.

Does the food and wine at Bern’s Steak House match the high acclaim?  While the expectations were lofty to start, the experience delivered. Bern’s provides a fascinating dining experience including a stroll through history, the process of fine food preparation and rare wine 101.  If you count steak and wine as a few of your favorite things, add Bern’s to your bucket list.

If you find yourself in Florida, a trip to Bern’s Steak House in Tampa should be on your itinerary.  Visitors to Clearwater Beach, St. Petersburg or the Orlando area theme parks will find Bern’s to be well worth the drive.

Drink Fancy With The 13 Most Common Types of Wine 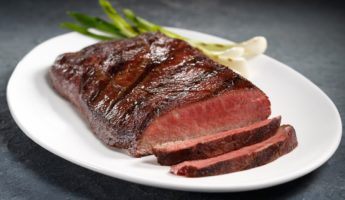