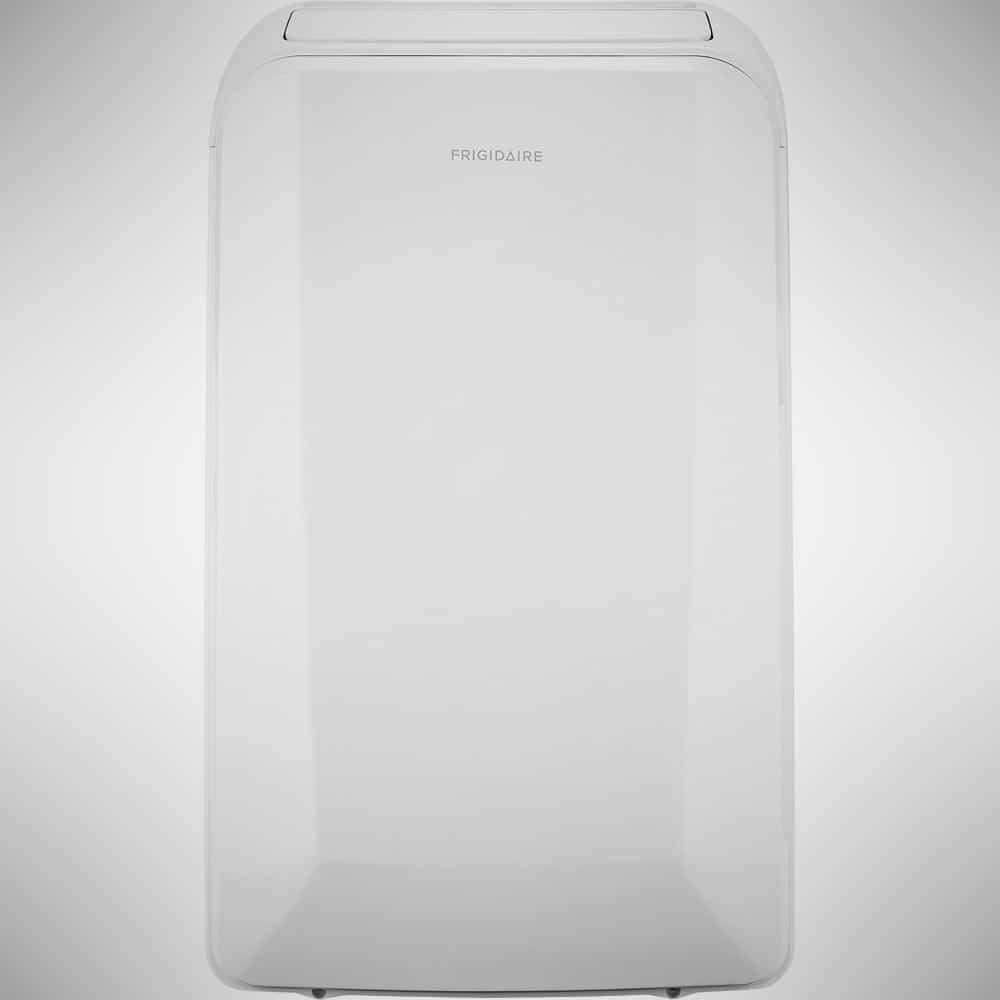 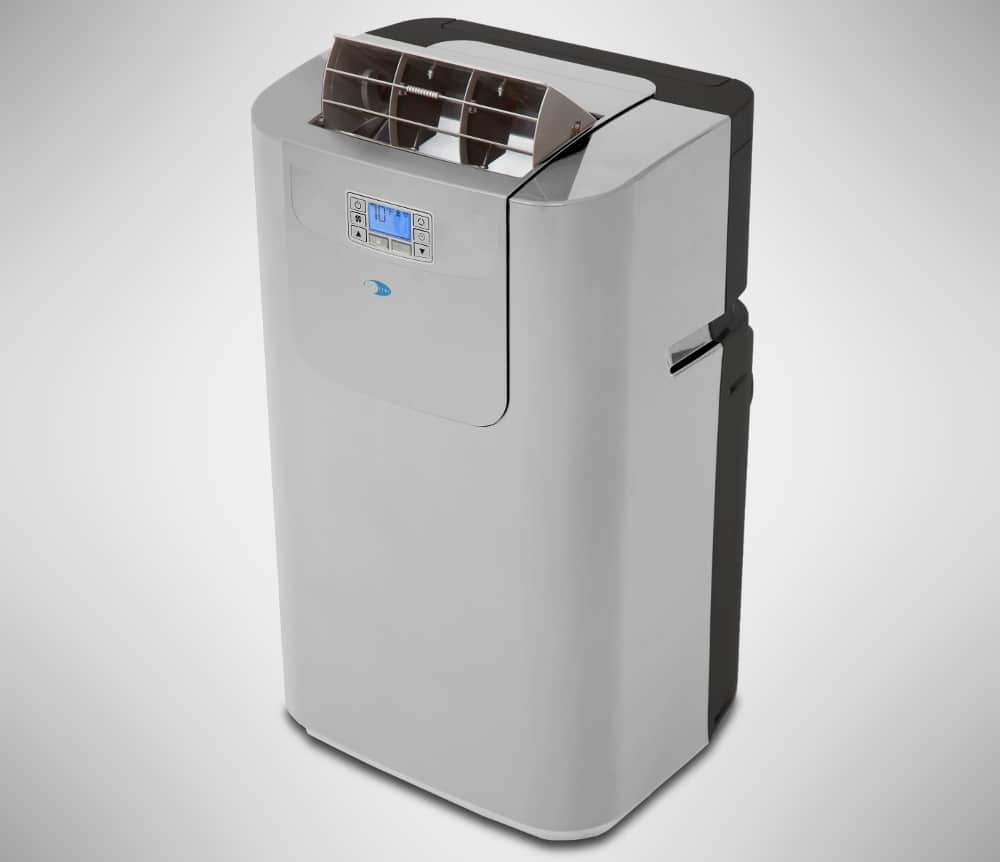 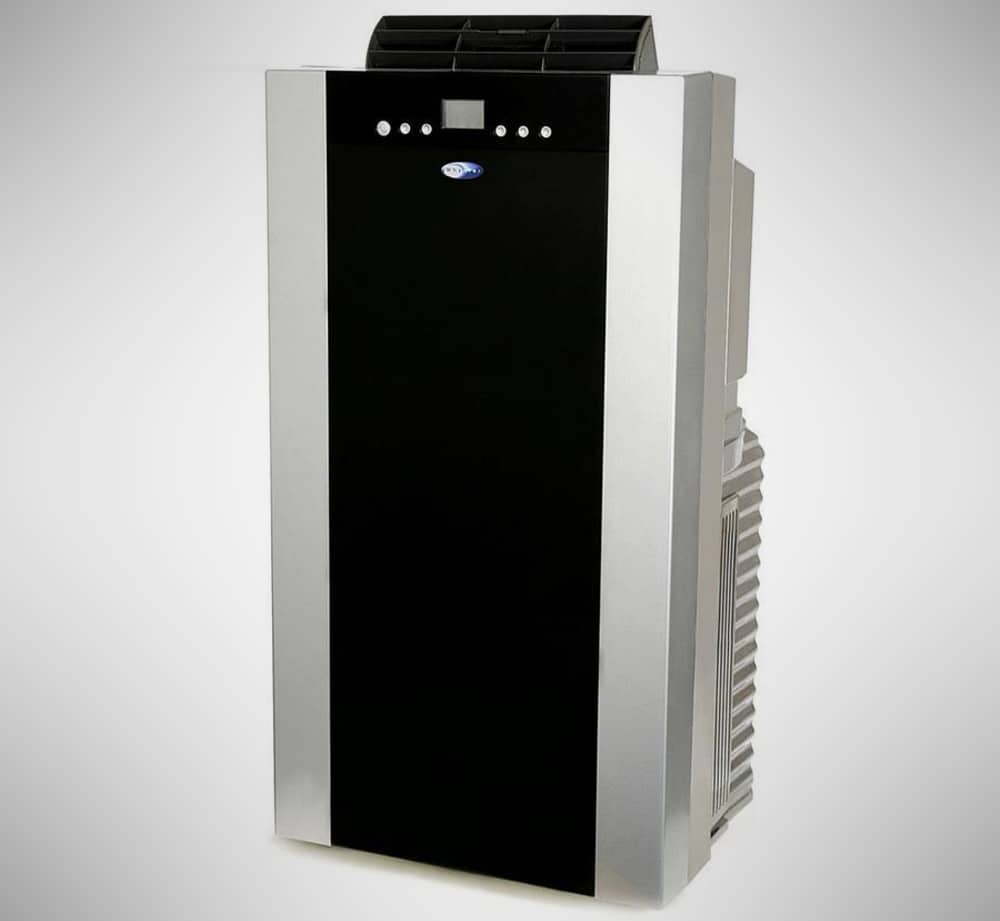 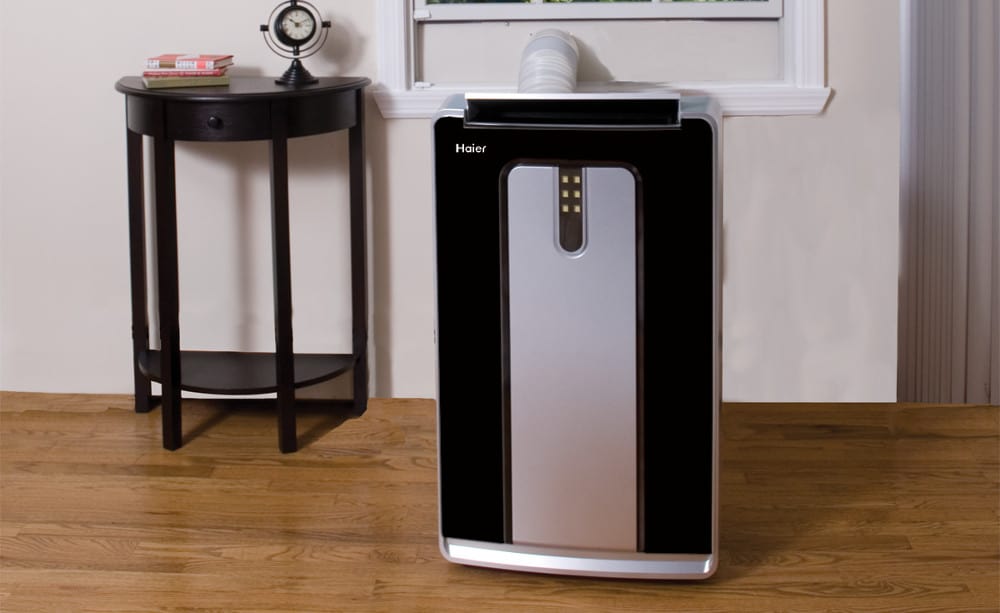 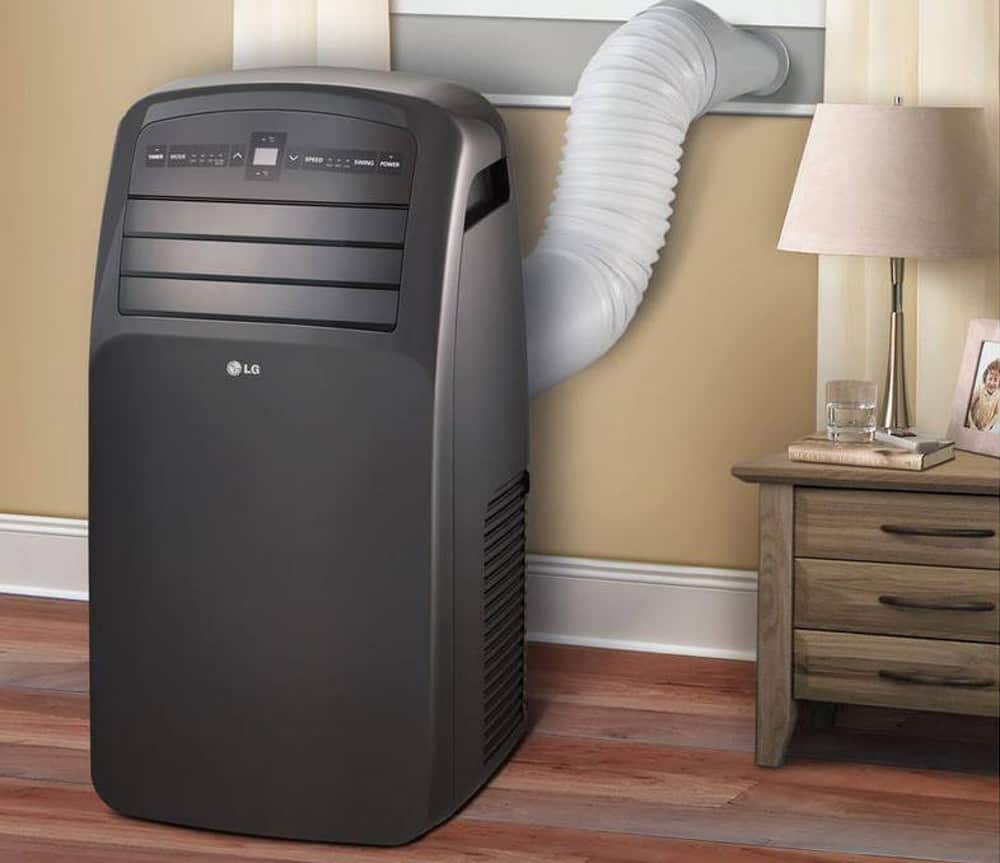 Portable is a bit of a misnomer when it comes to these trash can-sized units. What makes them technically “portable” is they can be easily rolled from one place to another, but you’ll still need to go through the breakdown and setup of the exhaust hose(s); which requires a window to operate. Unlike heavy window units, a portable AC sits on the floor inside your home or apartment, which eliminates the risk of it dropping out and breaking, or killing someone, though it still must be vented, which is done via an exhaust hose, meaning it still must be tethered to some outside opening by the length of hose.

Most portable units come with a spacer that fits into a window and provides a mounting space for the hose to go, allowing the hot air to go out without allowing more warm air to come in. Like window units, these are good at keeping a single room cool, but falter when it comes to air conditioning an entire house. They can be used to spot cool, or keep a basic bedroom or office cool, but might be overworked with a larger space, even if you seek out larger units.

The ventilation hose is the biggest issue with portable AC, since it’s smaller than the vents used for central air and window units. By not being able to remove as much hot air, the portable units also can’t produce as much cool air. If you live in a place that gets scorching hot, many units will labor to stay frosty, or won’t meet your needs at all.

By using dual hose models that have more ventilation, you can avoid some of these problems, but you’ll be paying significantly more than you would for a window unit, and it’s still going to be slightly less effective.

The other problem that comes with portable AC is not just the prohibitive price, but the floor space it occupies. Since it doesn’t get tucked out through a window, the entire bulky thing will be resting somewhere in your home. You can trundle it around on the wheels – provided you don’t pull the hose or hoses out – but even the lightest one is bulky and doesn’t move terribly smoothly.

If planning to use your portable AC in a bedroom, know that they typically loud, which will likely disturb your sleep, unless you’re a deep, hard rester.

Finally, since the unit isn’t pulling air from the outside, it drops the air pressure in any room it’s in, which forces the hot air from outside to seep in to equalize the pressure. The result is the harder the unit works, the more warm air comes in, so the harder the unit must work. Simultaneously, the hot air going through the exhaust tube bleeds heat back into the room before it goes out, again making the room warmer even as it cools. These are truly the Catch-22 of air conditioning options.

Should you still decide these units are best for you, here’s the ones that can do the most work.

Measured by the amount of energy required to raise one pound of water by one degree, in the case of air conditioners, it’s essentially the thermal ability to lower a pound of water by one degree. The translation is that the higher the BTU, the more cooling muscle the unit brings to the table. Though, more power means more weight and more noise. Generally speaking, if you dip much below 12,000 BTU, you’re only going to spot cool right in front of the AC’s vent.

Probably your best bet if you’re hoping to find a way to cool down your bedroom, LG managed to make this both good at cooling small and large rooms without making an ungodly racket. It’s astoundingly light for as much cooling capacity as it brings to the table, able to top 14,000 BTU units without breaking a sweat. Where it falters is in the dehumidifying arena, where it’s just not able to get nearly as much moisture out of the air as anything on this list. If you live in a dry climate, this is fairly painless, but anyone operating in Everglades level wetness will find this will still leave your home feeling muggy. Purchase: $399

Haier’s offering is a versatile choice that moves around well, is simple to set up, cools nicely for more small to medium rooms in the 150-300+ sq. ft. range, but can also work on larger spaces, just not terribly well. Where it does outshine much of the competition is in how well it handles humidity. While all but the cheapest portable air conditioners have dehumidifying options, the HPN12XCM stood up to serious wetness, able to both dry the air out efficiently, which helped cool the room. The noise level is also well below other options, which is nice. The major issue with the HPN12XCM is it’s poor energy efficiency, as it will make a notable impact on your power bills, since it barely clears government standards for EER (Energy Efficiency Ratio). Expect an estimated $10-$20 difference per year. Purchase: $397

Scrolling down, you’ll notice that another Whynter model makes the list, and despite being smaller with less BTU output, it’s actually more effective at cooling and lighter, bearing an identical remote control. With that said, this model has a more modern aesthetic, and the difference in power and cooling ability is fairly negligible when put against it’s slightly more expensive, 12,000 BTU brother. This one also has greater reliability over long periods of time, meaning you won’t be as likely to make warranty claims or replace it as time goes by. Be prepared for some serious noise. Purchase: $453

Fairly light and mobile compared with its contemporaries, it has 12,000 BTUs of cooling power, though it can outpace 14,000 BTU options in larger rooms. It’s impossible to say that any air conditioner is ecologically sound, but the ARC-122DS does manage to be much more energy efficient than anything we could find. It keeps electric bills more reasonable and is more efficient at cooling than anything else out there, partly due to the dual hose design. Another noisy choice, though more tolerable than any 14,000 BTU choices. Purchase: $465

The biggest bull in the chute, this is meant for those who have larger rooms that need a portable unit, want a clean aesthetic, and require a relative amount of quiet. It’s hard to say whether it will be quiet enough for your master suite, but it very well could be as the decibel output isn’t nearly as crippling as most, and certainly well below other 14,000 BTU alternatives. Even if you have an 800 sq. ft. great room, this can drop the temperature to tolerable levels while not causing a ruckus. It’s big and tough to manhandle around the house, making “portable” a myth. Where it seriously fails is in reliability, so get that extended warranty, or expect to be tossing it out. Purchase: $500