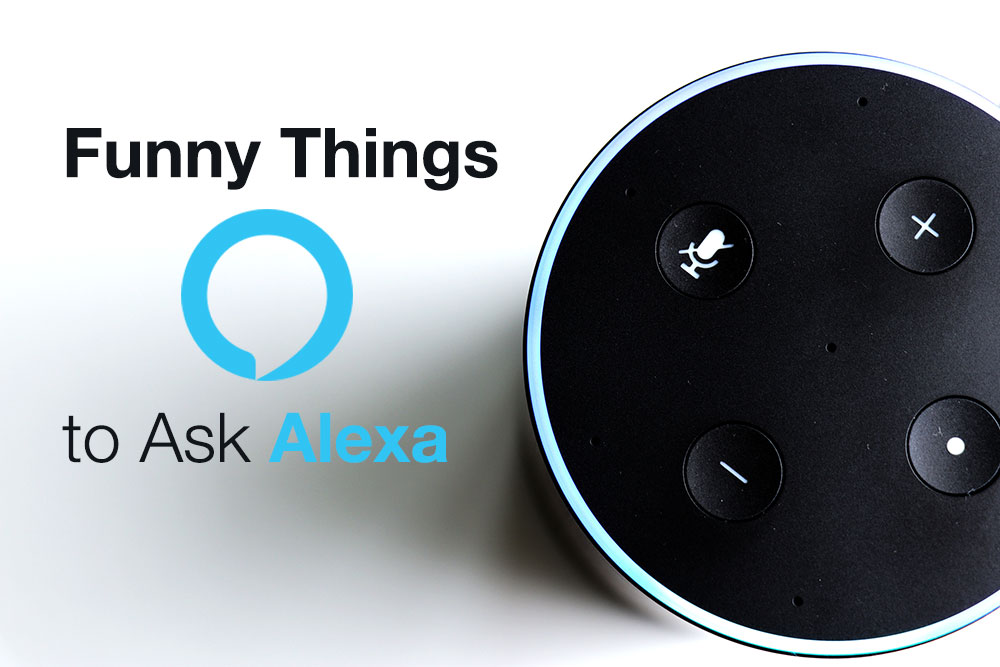 As soon as someone created an AI assistant, someone else made a list of hilarious questions to ask them. That’s just the paradox of modern life. Today, we are going to take a look at some funny things to ask Alexa. Ranging from the interesting to the bizarre, Amazon’s Alexa is there to be questioned after all.

Artificial Intelligence is all around us. By that, we’re talking about programs such as Siri and Alexa, not the kind of artificial that applies to YouTube’s (least) favorite sons, the Paul brothers.

If you don’t have a list of funny things to ask Alexa, then you’ve undoubtedly got a pointless query list for Siri or an asinine request sheet for Google Assistant.

Give a man a fish he can eat for a day, teach that many how to fish, he will eat forever. Teach a man how to make artificial intelligence, and he will have a never-ending list of pointless questions to ask it.

Don’t have an Alexa device yet? Pick up the snazzy new 4th Gen Echo Dot. It’ll get you into the game, and it helps us keep publishing content, too.

So let’s get straight down to business, shall we? What are the top twenty funny things to ask Alexa? Keep reading to find out.

Now, there are a lot of different questions in the world. I would argue there are infinite questions. (Feel free to drop the exact number in the comments should you be so mathematically inclined.)

Point is, there is no shortage of things we can ask in order to obtain information. So how do you start to compile a list of the top funny things to ask Alexa?

The simple answer is that there is no order.

The following questions are as they came to us and as we found them. We kept things PG for this list, especially given the number of kids who use Alexa devices and their uncanny ability to remember things they were never meant to overhear.

8 Funny Things to Ask Alexa (for Kids of All Ages)

There is no shortage of questions you can ask Alexa. We’ve kept our questions clean (for once) so far, but if you want to, you can really get under Alexa’s skin and watch as she gets more than a little shirty with you.

You don’t have to go full raunchy to get your kicks, of course. Most of this is dad joke-level humor. That, or it requires a certain level of–shall we say–cultural exposure to appreciate Alexa’s response. (Sigh, we’re getting old.)

4 Not so Funny Things to Ask Alexa

It’s interesting to note that Alexa is an AI of many thoughts and many words. She is a mysterious creature and, as such, has a strong tendency to alter her answers from time to time. Almost all of the funny things to ask Alexa come with multiple possible responses.

However, we have also seen that Alexa has quite the ascorbic wit. This means that there are plenty of funny things not to ask Alexa. I know that the first example on the list below came from a very real scenario, which is actually quite chilling. However, the others are certainly tragically funny enough to be true.

Funny Things to Ask Alexa That Are Rather Rude

As soon as AI technology started being able to recognize and respond to spoken questions, people were coming up with rude things to ask. It’s human nature. So poor Alexa has had to cope with a fair share of rude requests being sent her way. Being the open-minded site that we are, we’ve investigated the different things to ask Alexa that are rude.

However, before you get too excited about our list of rude things to ask Alexa, it’s worth noting that she is very demure. Her programming is tight (no not in a rude way) so you are not likely to get your Alexa to be rude. It’s not even easy to get her to swear, with her common responses to anything bordering on vulgar being I’d rather not say anything rude.

The worst thing you’re likely to get from Alexa is a theoretical admission of her alcoholism.

Regardless of when it is you ask the question, Alexa will always reply favorably. I mean, it’s always 5 o clock somewhere, right?

Hope is not lost! Thankfully, there are developers out there with a sense of humor. Those geeky few who understand the needs of the masses. They have put their heads together and created Samuel L. Jackson mode for Alexa.

Break Your Concentration With These Funny Things to Ask Samuel L. Jackson on Alexa

That’s right motherf*cker, Samuel L. Jackson has come to Alexa. The pre-programmed good girl has been corrupted by the most foul-mouthed man on the planet, and possibly the only man eloquent enough to narrate my life story.

There are few people on planet earth with a voice more identifiable or desirable than Samuel L. Jackson. It is no surprise that he was the first celebrity to lend his voice to the Amazon AI program. Who wouldn’t want to have that iconic voice booming around the house? The below questions are a few examples of the weird and wonderful questions (and answers) that you not have at your fingertips.

On top of that however, you can also have Samuel L. Jackson the majority of your general questions too.

We are living the Jetson’s life. There is no denying it. Sure, our cars don’t fold away into briefcases… yet. However, we have so many robot servants that it is common for us to mix them up. Just don’t address Alexa as Siri or ask Siri about Jarvis. But, unfortunately, all is not love and happiness in the world of AI assistants.

Need something for your human companions? Try the 180 Best Never Have I Ever Questions

If you have something you love to ask Alexa, drop it into the comments. We’d love to hear all about the crazy questions you ask Alexa and the responses she gives you.