Most Expensive Whiskey: The Seven Costliest Whiskies Ever Sold

of 17
From Handcrafted Crystal to Blank Bottles Whiskey is Packaged Differently
Not All Whiske is Made in the Same Cask Type
What do you Consider an Expensive Whisky
Macallan's Single Malts Aged in Specialist Casks
How Much Would You Pay for a Single Bottle of The Finest Irish Whiskey
The Hanyu Distillery is a Revered Producer of Japanese Whiskey - via SCMP
Dalmore Distillery Produced One of the Most Exclusive Labels When it Comes to Whiskey - via Prestige Online
The Macallen Lalique Legacy Collection is a Superb Whiskey Collection - via Chilled Magazine
The Macallan Red Collection is the Holy Grail for Many Whiskey Fans
Isabella's Islay Is The Most Expensive Single Malt Scotch Ever Made
The Fine and Rare Whiskey is Not Your Everyday Spirit
One Bottle of the The Macallan Michael Dillon Will Cost a Small Fortune
One Upon a Time This Was The Most Expensive Whiskey Ever Sold At Auction
Can You Afford a Bottle of Macallan Peter Blake
You Can't Buy This Yamazaki in the Liquor Store
Macallan is One of the Most Expensive Whiskey Brands - via The Macallan
Are You In the Whiskey Market for a Rare Collection
Most Expensive Whiskey: The Seven Costliest Whiskies Ever Sold
Buy Now 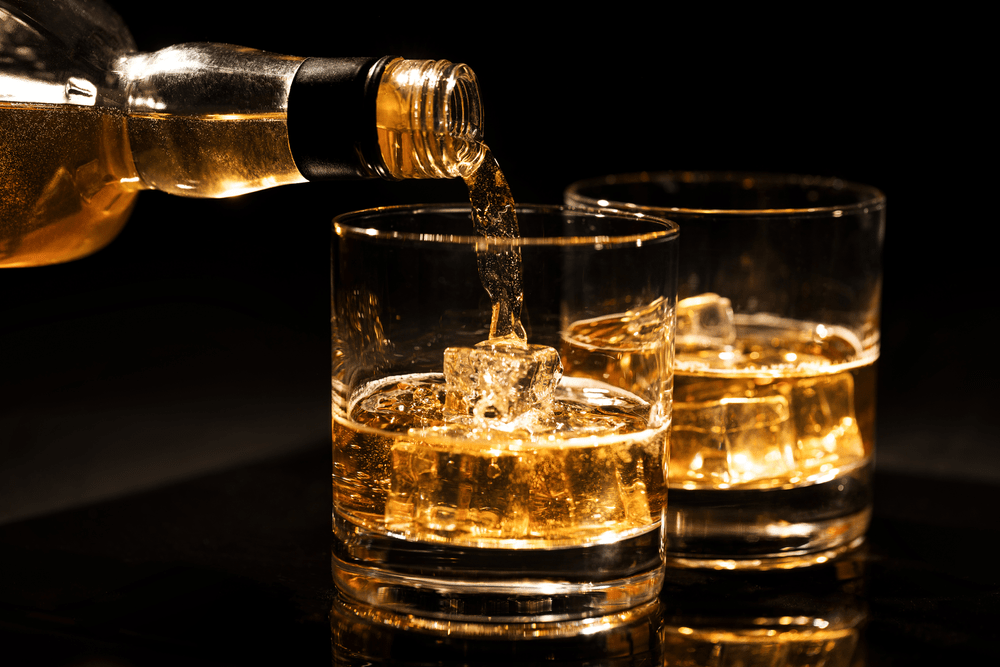 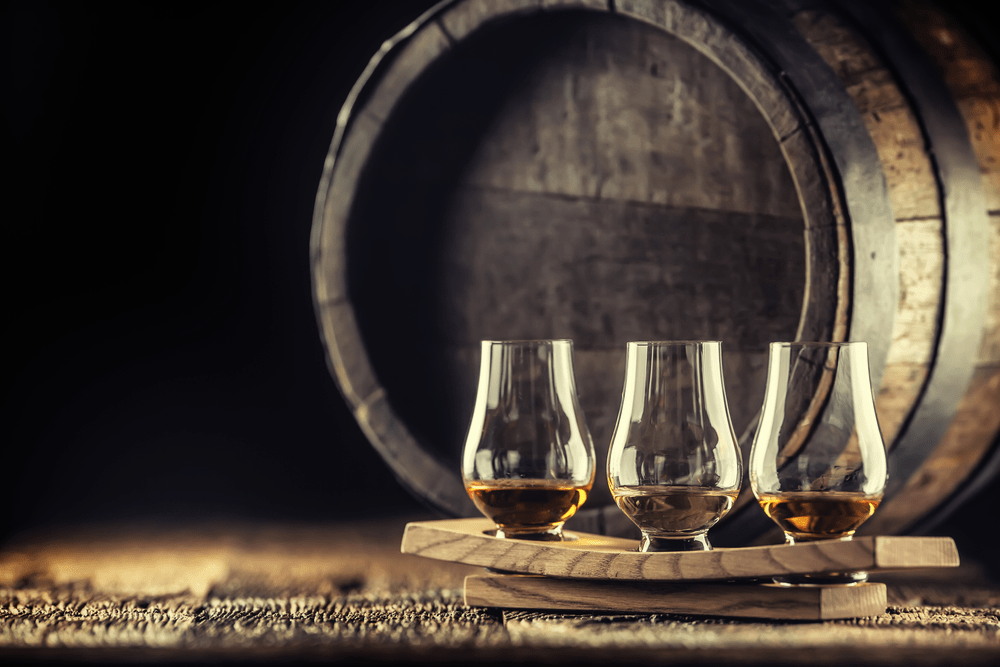 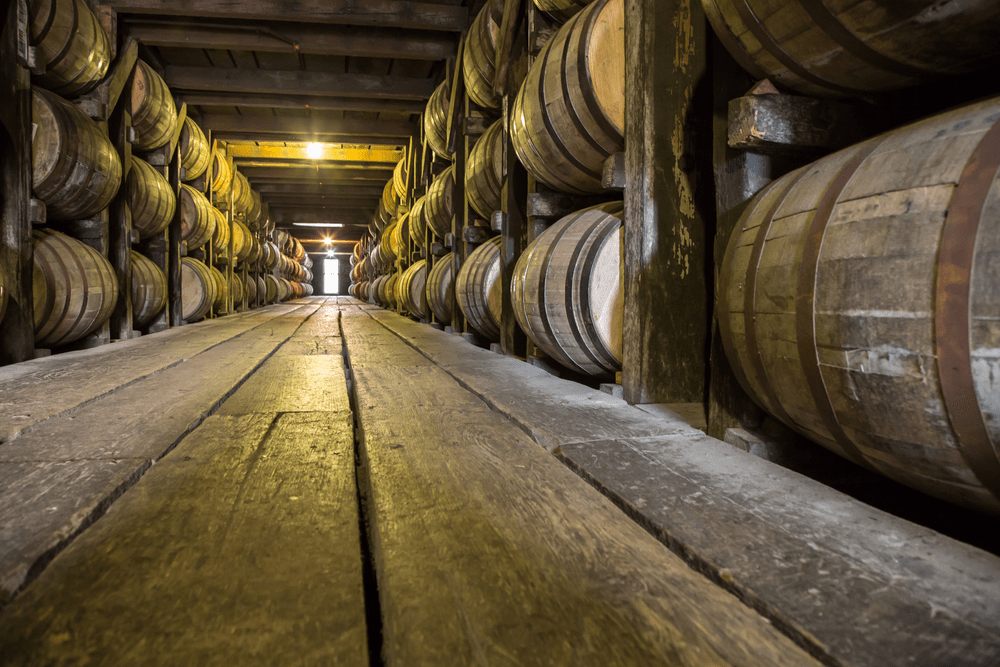 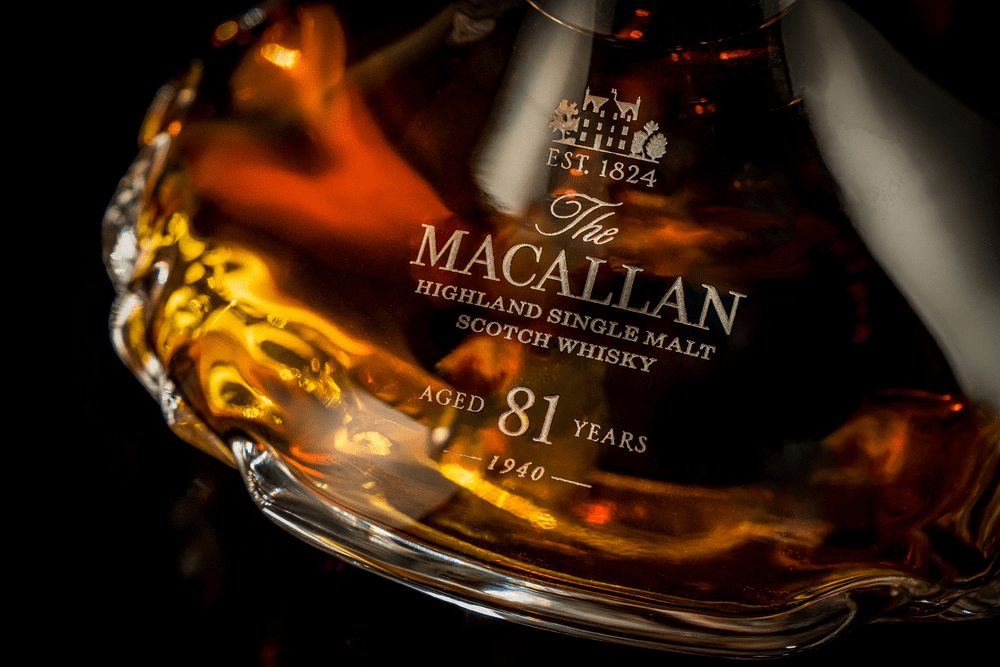 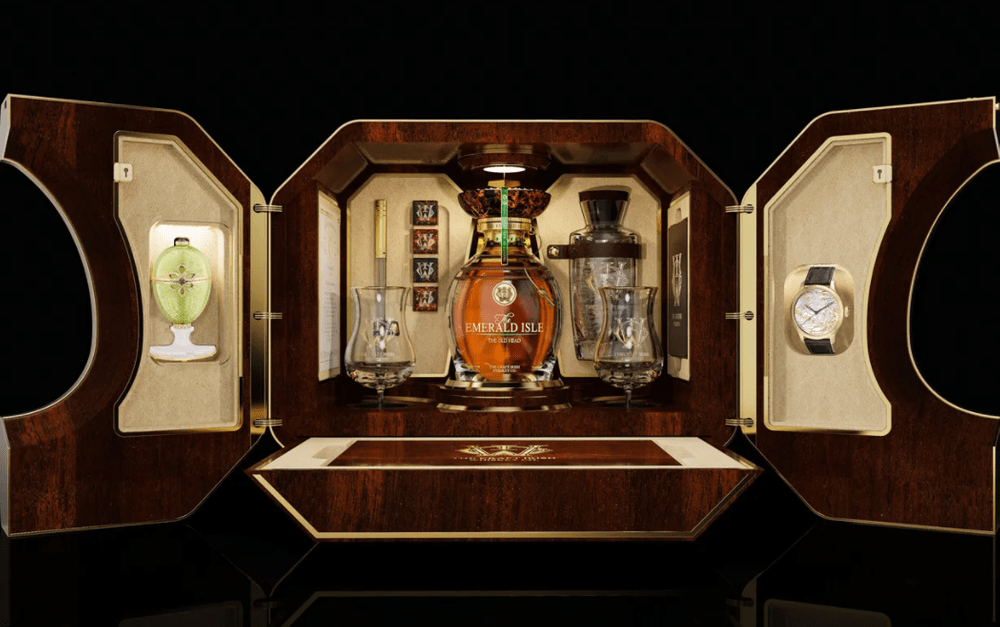 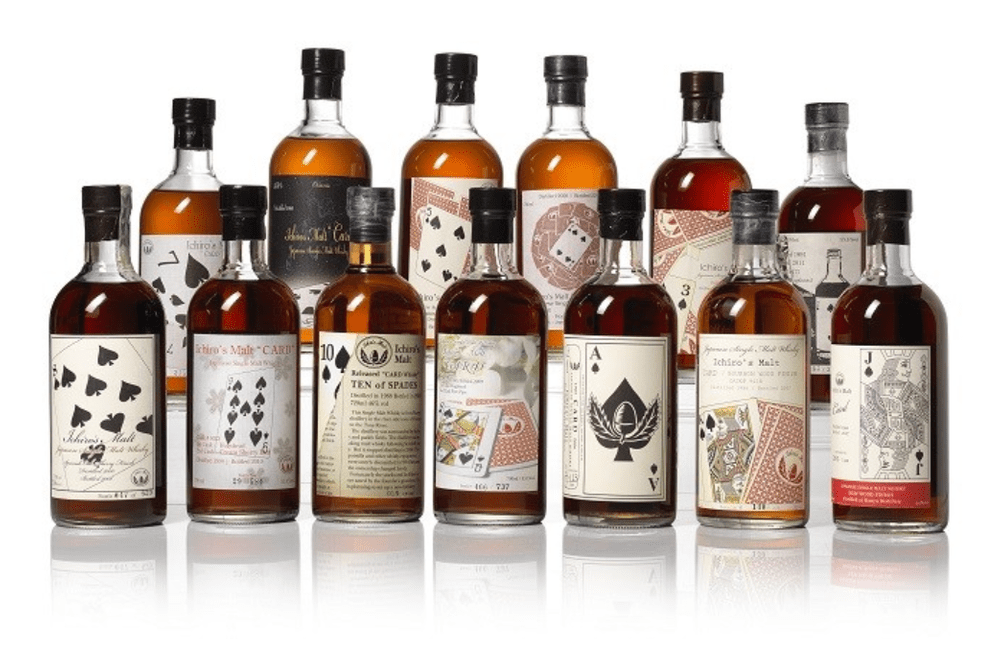 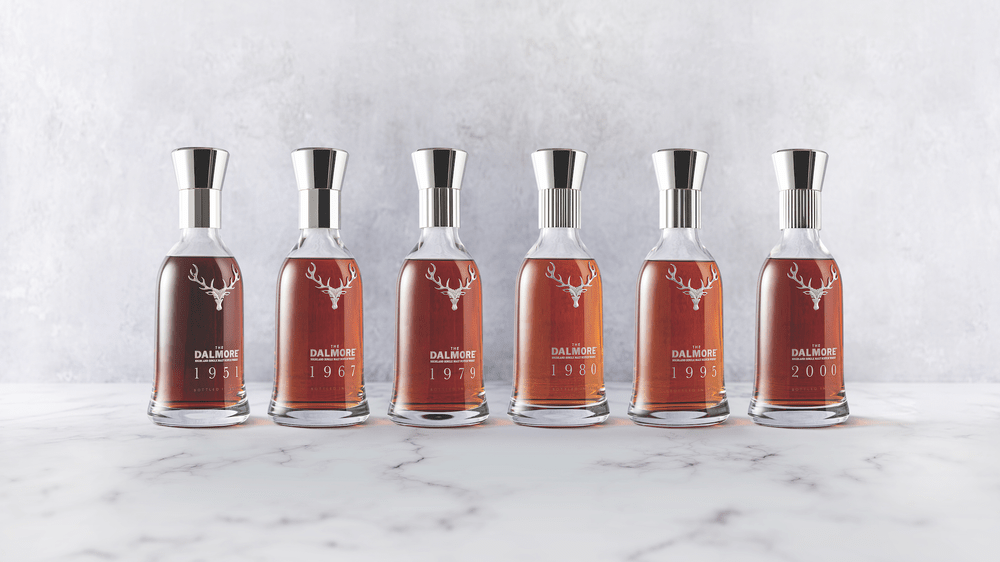 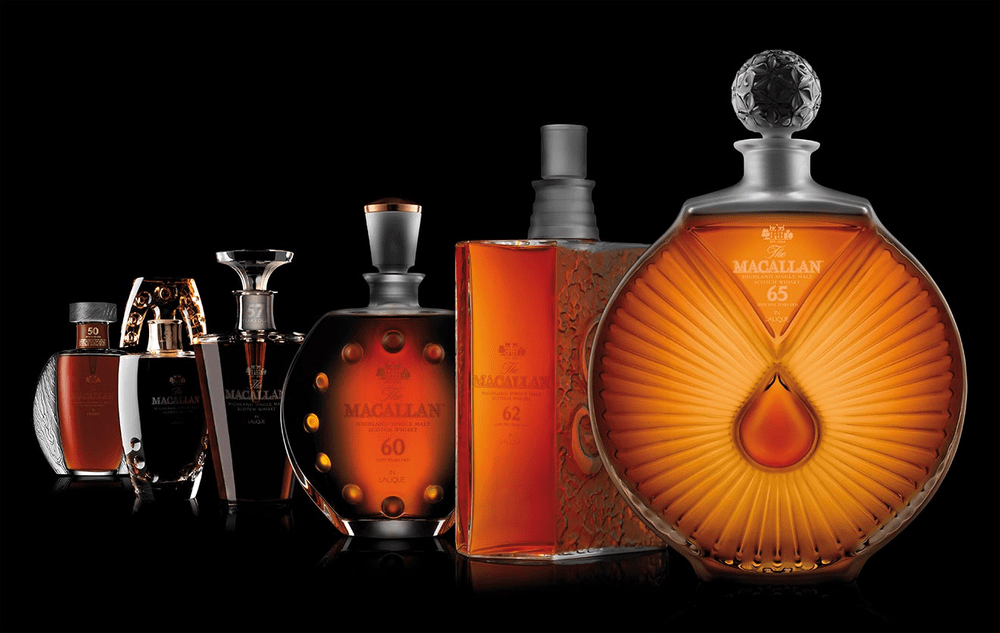 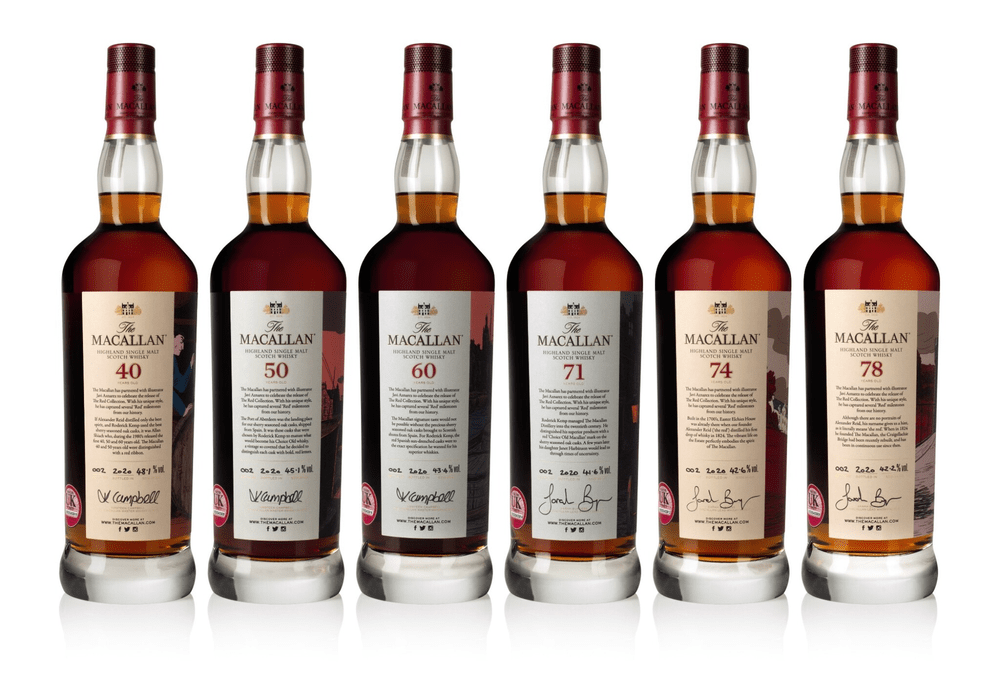 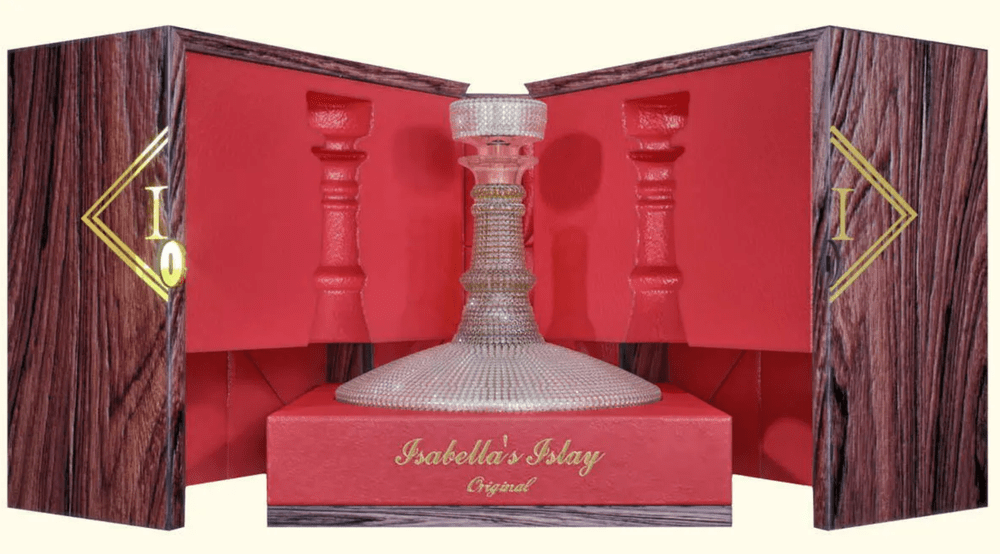 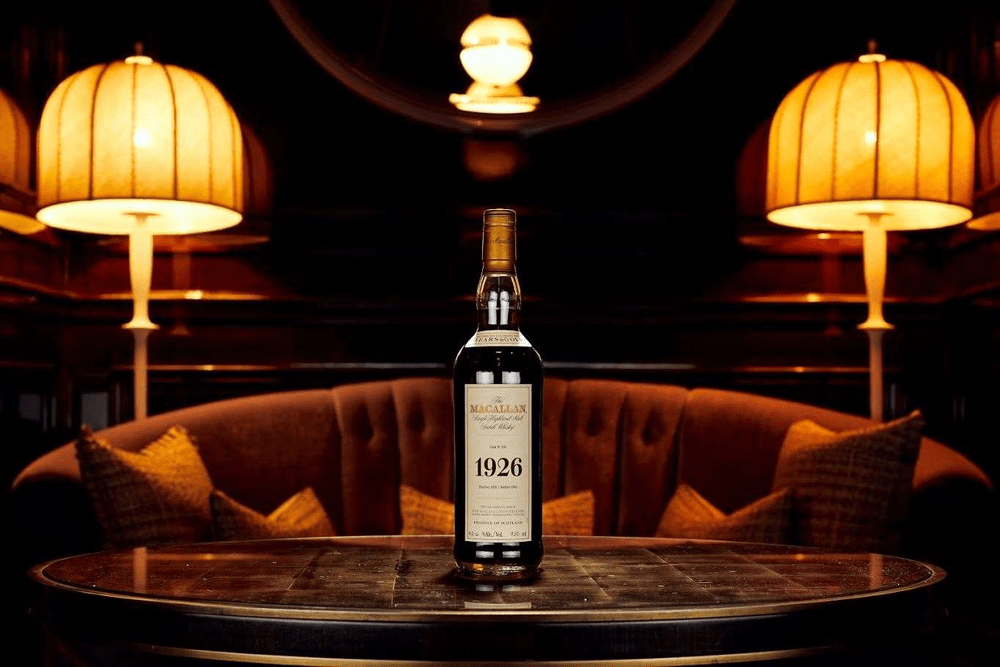 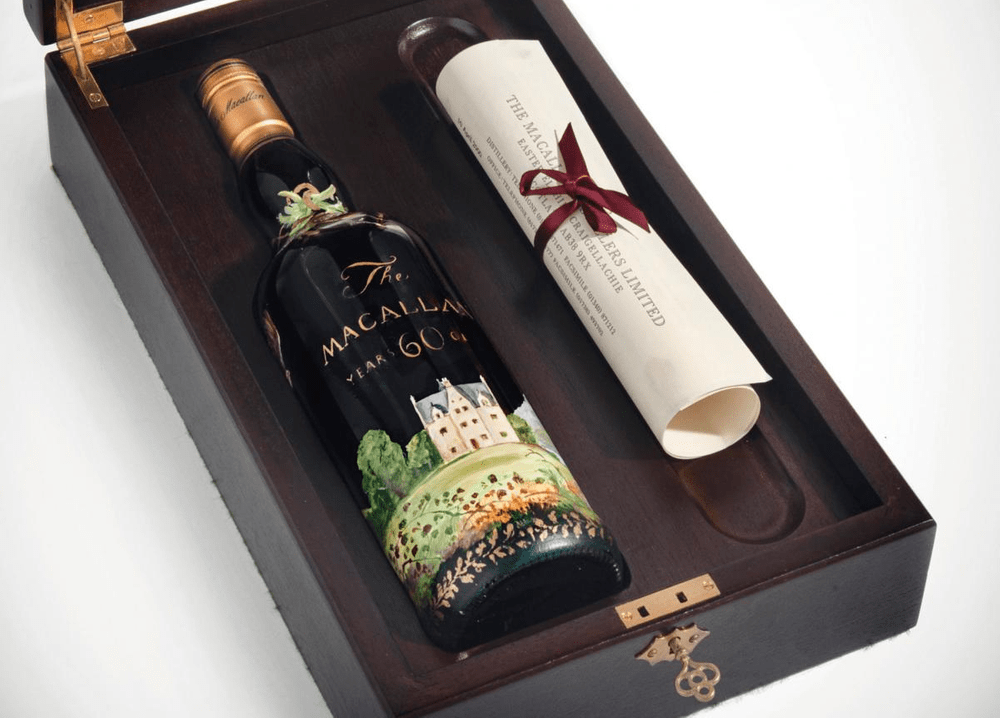 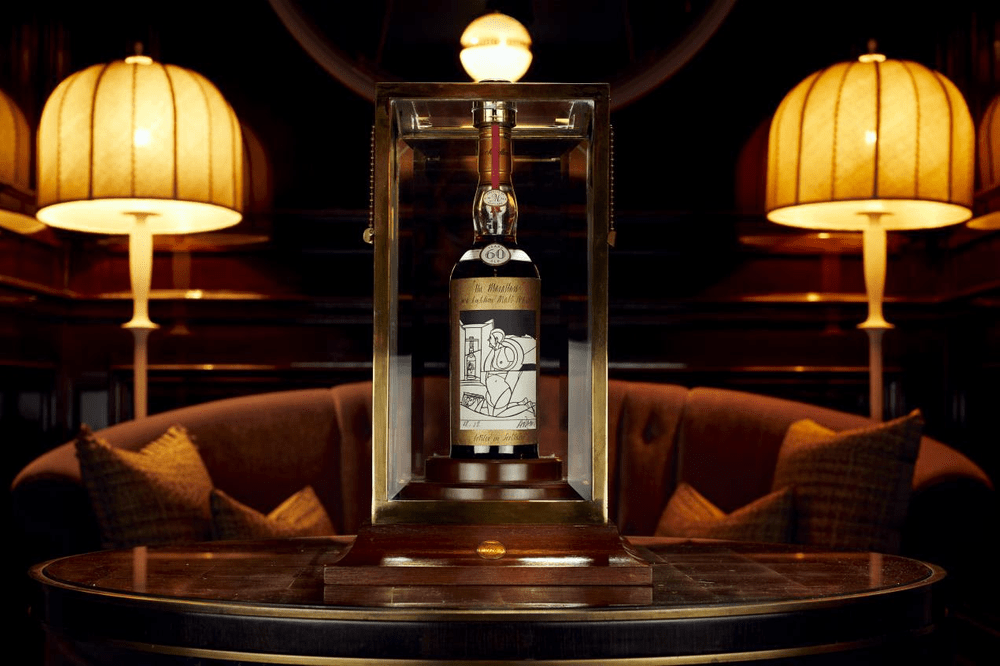 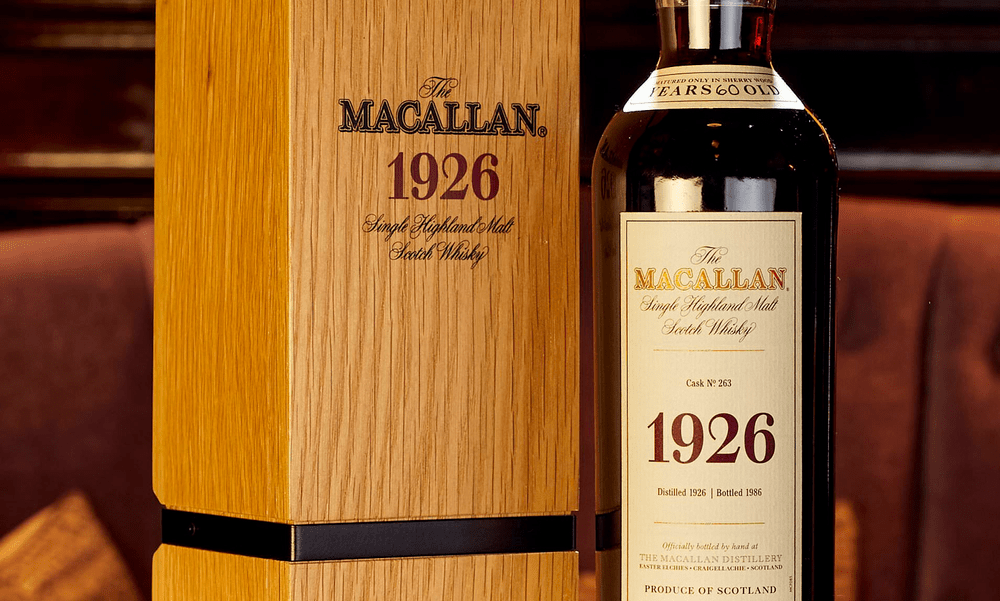 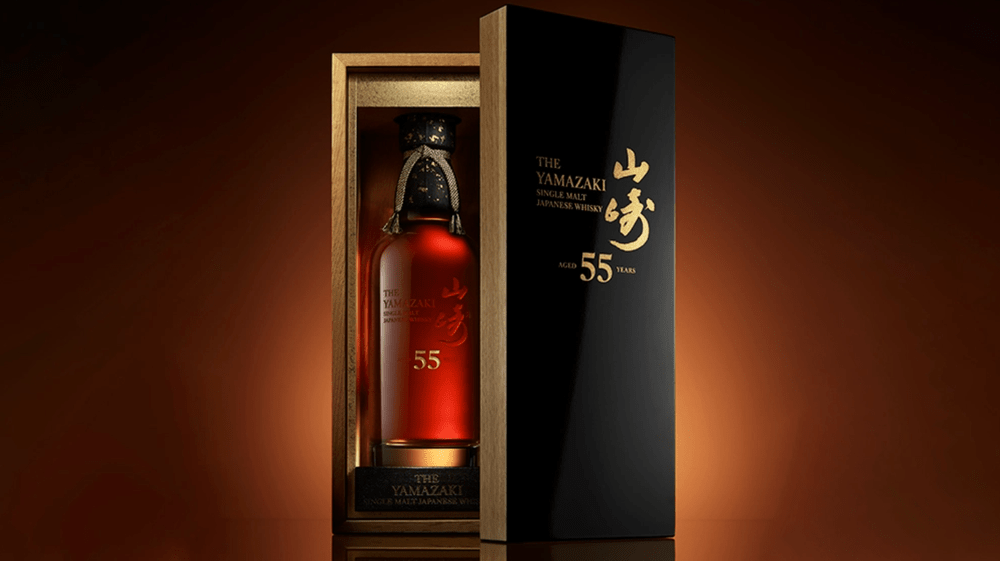 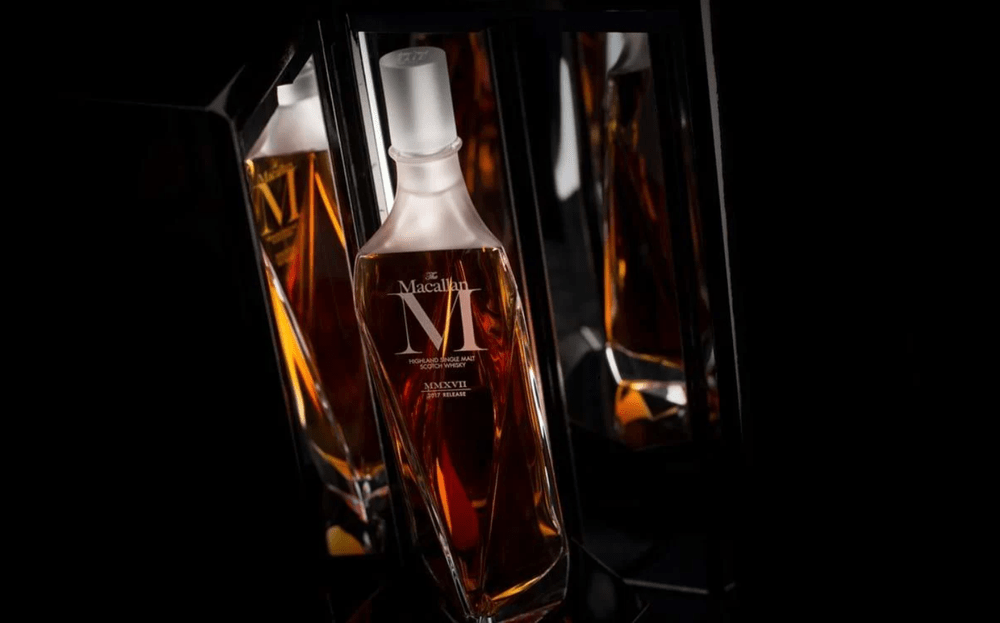 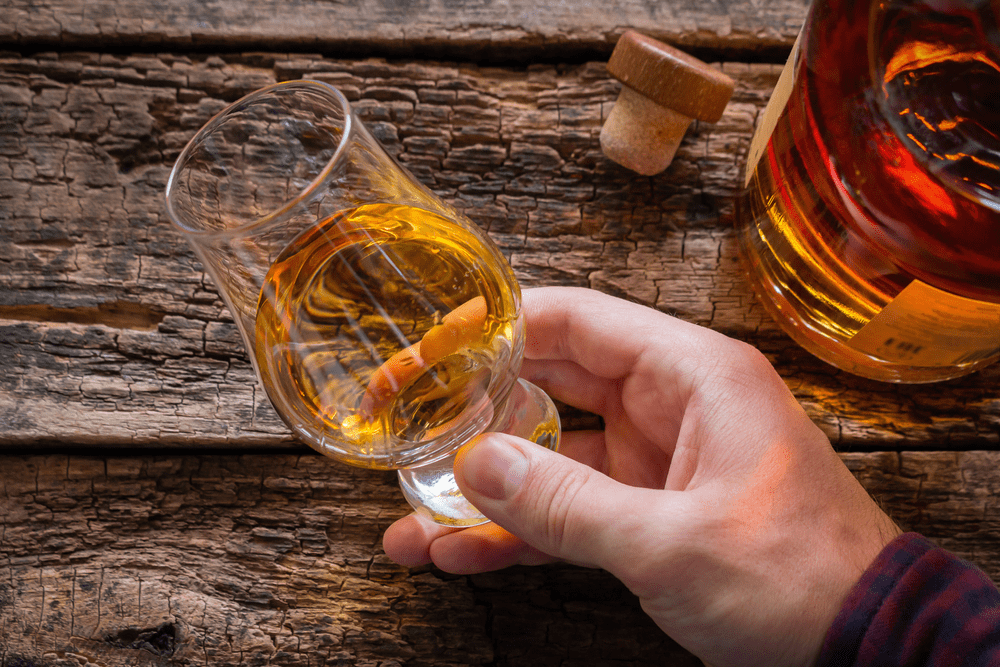 Do you love your malt enough to shell out several millions of dollars for a bottle? Either way, we give you the ultimate list of the most insanely expensive bottles of whiskey in the world!

These whiskey bottles have broken records. There are whiskies aged over half a century, distilled by masters in the whiskey world, and bottles in artful decanters and diamond-encrusted bottles. And there’s one thing these malts have in common, they have broken the bank too!

Fun Fact: Whiskey is derived from the Gaelic word, Uisge Beatha. It means “water of life.” No wonder it can be so expensive!

You can say that these expensive malts can create a niche of their own.

But below, we’ll discuss what makes whiskey expensive and the most expensive whiskey bottles. It’s pretty interesting to know what goes into making whiskey that makes a bottle reach an opulent price tag!

Top 7 Most Expensive Whiskies in the World

Without further ado, here are the oldest, rarest, costliest bottles of whiskey from around the world.

There are plenty of reasons why the Macallan M is among the most expensive whiskey bottles in the world. First, it’s a 6-liter bottle of fine, sophisticated whiskey, but that’s not necessarily what makes it super special to be part of this list.

Crafting quality-wise, it’s a single malt whiskey aged in Spanish oak barrels for no less than 70 years. But the actual value of the Macallan M is in its masterpiece decanter made with handcrafted crystals with a crystal stopper. The bottle was an iconic collaboration of creative director Fabien Baron, the Macmillan brand, and Lalique crystal.

The Yamazaki Single Malt Whisky bottle made headlines when a collector bought it for $559,200. And it wasn’t from an auction like most expensive whisky bottles are sold. As it turned out, it was purchased from a Duty-Free shop at the Istanbul Airport in 2021.

But back in 2020, another one of the 100 limited-edition bottles of The Yamazaki 55-Year-Old from the same year but different bottling became the most expensive Japanese whisky. It sold for $795,000 in an auction in Hong Kong, 10x more than its pre-sale estimate.

The stunning price set a new milestone for the Japanese whisky market. But understandable as the 46% ABV blend is bottled in a crystal decanter with real gold dust.

Fun Fact: The Yamazaki 55-Yead-Old is the oldest Japanese whisky in history. It’s previously aged in Japanese Mizunara oak barrels from 1960 but changed into white oak barrels in 1964.

With only 40 bottles of this fine whiskey aged in ex-Sherry barrels from cask #263 ever released, it already got the “rare” part that makes whiskey super expensive. The Macallan Peter Blake is one of the most exclusive liquors ever made, and it’s super old too! It was distilled in 1926 but only bottled in 1986, precisely 60 years from its manufacturing date.

Twenty-four of the 40 bottles of the “holy grail” whiskey were commissioned to two renowned artists. Twelve bottles featured a design hand-painted by British artist Sir Peter Blake. He was known for co-creating the sleeve design of the Beatles’ album Sgt. Pepper’s Lonely Hearts Club Band. And one of the bottles sold for a million dollars in an auction in March 2018.

This particular bottle is from the other set of 12 bottles from the Macallan 1926 series designed and crafted by the Italian artist Valerio Adami. The blend of rarity and vintage makes it a cherished liquor and a very valuable million-dollar malt.

The Macallan 1926 Valerio Adami held the world title as the most expensive whiskey sold in 2018 in an auction in Edinburgh.

This time, it was The Macallan 1926 bottle with the hand-painted design by the famous Irish artist Michael Dillon well-known for his historical decorations. There is only one of these bottles in the world, a true one-of-a-kind. It was considered the landmark moment in the whiskey market.

The 1926 Fine &Rare is considered the oldest whiskey and the founding father of The Macallan Fine & Rare series, which is still the most sought-after whiskey collection to this day.

Well, the high value is mainly for the exquisite white gold bottle encrusted with 8,500 real diamonds and 300 rubies. Of course, it’s supposed to be good whiskey too, but who would speak ill of a bottle of whiskey you paid over $6 million for?

If you want a cheaper version, the company has a Special Edition Whiskey bottled in the finest English crystal for $740,000.

We’ve made a list of the most expensive whiskey bottles. Here’s the list of outrageously prized whiskey collections ever sold in auctions.

Another super expensive collection from Macallan distillery is the Macallan Red Collection. This set comprises six premium blends and contains two of the oldest types of whiskey the distillery has ever released, a 74 and a 78-year-old blend.

It is the only complete set of The Dalmore Decades No.6 Collection.

It’s an ultra-rare collection as the distillery ceased operation in 2000. This series includes 54 bottles of Japanese whiskey from the 400 conserved casks of premium whiskey released between 2005 and 2014.

The Full Card Series is considered the most expensive set of Japanese whiskey ever sold.

Discover the most expensive whiskey set, a partnership between Craft Irish Whiskey Co. and the iconic Faberge. The Emerald Isle collection honors the “Seven Wonders of Ireland” and features the oldest, rarest triple-distilled malt whiskey in existence!

Not to mention, it’s an ultra-exclusive release only available in seven sets. The collection includes a bespoke Faberge Celtic egg made with 18K yellow gold and 104 real diamonds and a Faberge 22k timepiece.

What Is the Most Expensive Macallan?

The Macallan is one of the most expensive whiskey brands, and its most expensive bottles ever sold at auction was an entire cask of The Macallan 1991 for a whopping price tag of $2.33 million. While it wasn’t the oldest, rarest bottles from The Macallan, the cask sold in an auction includes a specially commissioned NFT. That, plus the fact that the cask contains around 600 bottles’ worth of 51.1% ABV fine whiskey, boosted the value.

Cheap vs. Expensive Whiskey, What’s the Difference Besides the Price Tag?

It goes without saying that an expensive whiskey is higher in quality. But do they taste better, or is it just a mad gimmick? What traits make some whiskey more costly than others in the first place?

The Older, the More Expensive!

As a universal rule, whiskeys aged for at least 30 years carry a higher price tag. And the older it gets, the price will increase unequivocally. But why?

The most expensive liquors in the world usually age inside old wood barrels for different amounts of time. And within that time frame, around 1-2% of alcohol disappears (to the heavens!) every year. That’s what they call Angel’s Share.

And after 30 years, 30-40% of the alcohol has vanished. That means older whiskeys have a smaller amount of liquid left inside those barrels. And less supply means the liquor is scarcer, significantly upping the price.

How can a type of liquor containing three basic ingredients (grain, yeast, water) be so expensive? It all comes down to how these ingredients are processed, influencing how the final whiskey taste, and thus, its price tag.

Producing Single Malt whiskey includes using copper pot stills that need to get scrubbed down thoroughly after batches. That makes the distillation process longer, adding to the cost.

Premium scotch whiskeys may also include other processes like using worm tubs and top-quality filters. These measures to further hone the taste of whiskey add cost to the process!

Whiskeys are aged in wooden casks, but what type of cask, exactly? – because that significantly affects the cost of the final bottle!

There are different barrels used in aging whiskey:

Typically, more porous casks cause more evaporation but give the whiskey some distinct flavors. Both elevate the price of the final product.

To be labeled as whiskey, it only has to have 40% Alcohol by Volume (ABV). But whiskeys don’t come out of the casks with precisely 40% ABV. Instead, the distilleries dilute it with water before bottling. Hence, they have more whiskey bottles to sell.

But when it’s bottled straight from the barrel, that whiskey is labeled “cask-strength,” which is naturally more expensive.

While a lot of money goes into making the whiskey, plenty of it also goes into crafting one-of-a-kind decanters. You will only see the most expensive whiskey bottles in appealing packaging like platinum and crystal decanter. And some can be more elaborate than others, like encrusted with real diamonds!

As a universal rule, anything rare usually commands a higher price tag, and the same goes for rare whiskey bottles. However, there are a few reasons that make a bottle of whiskey rare:

And the simplest explanation of why some whiskeys have million-dollar price tags:

Fun Fact: Whiskey was once used as an informal currency for conducting business in 18th century America, particularly around Pennsylvania.

And that’s it – the world’s most expensive whiskies, both single bottles and whiskey collections!

However, most whiskey fanatics would agree with – whiskey is king. But these bottles do take the trophy in the whiskey tree. And for the liquor called the “water of life,” the hefty prices are somewhat unsurprising.

Still, if you have a million dollars, would you buy one of the most expensive whiskeys in the world? Let us know in the comments what your favorite drink is, and would you cry if someone opened one of the above bottles and mixed it with coke?