61 Touching Quotes from Princess Diana on Marriage, Kindness, and Family

of 1
Famous Quotes by Diana, Princess of Wales
61 Touching Quotes from Princess Diana on Marriage, Kindness, and Family
Buy Now 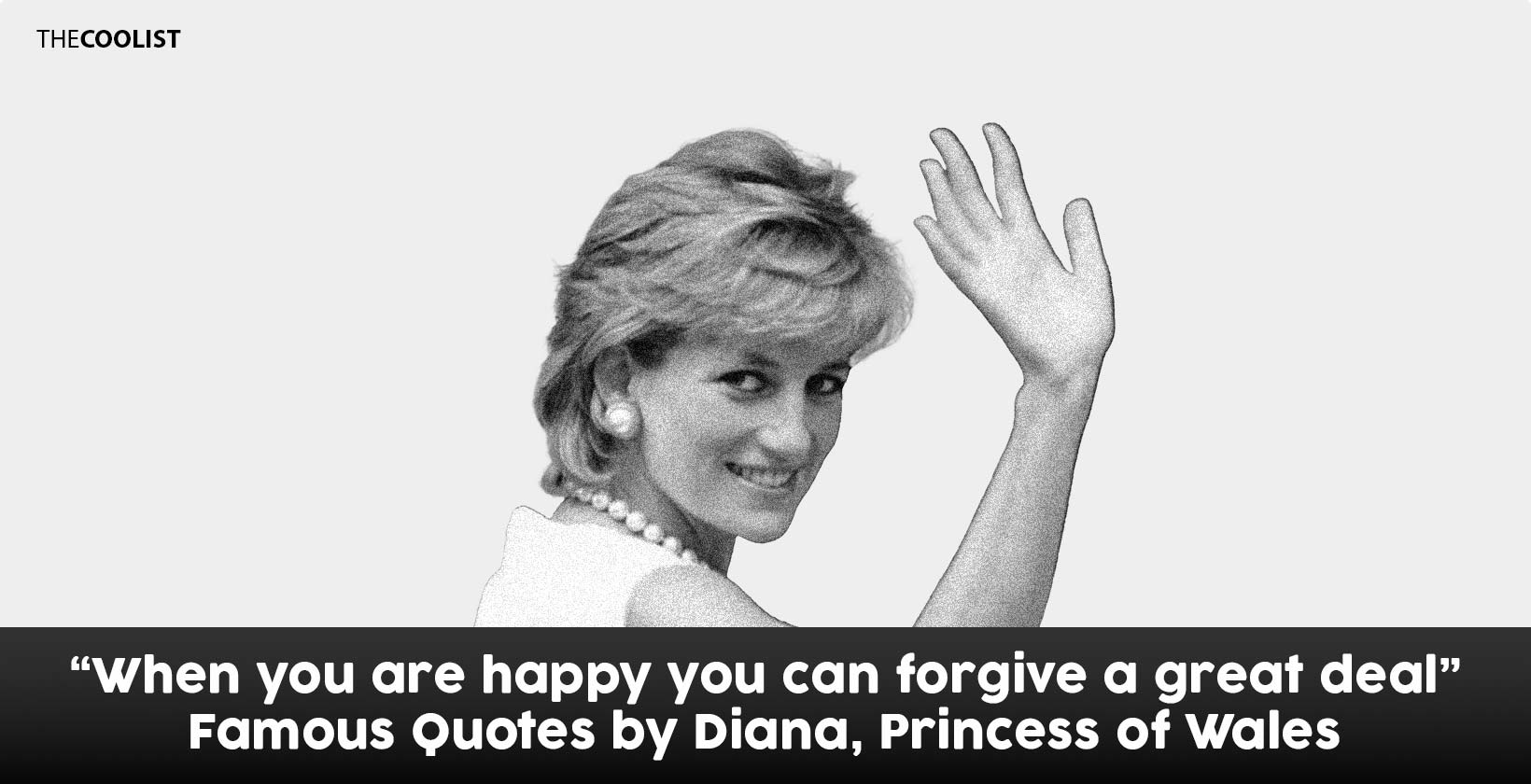 With so many Princess Diana quotes out there, it is hard to pick our favorite. During her time as a princess, Lady Di was a true icon who helped others in a time when she needed help herself.

It has been no secret that Lady Diana had a turbulent relationship with Prince Charles and with the Queen and the royal family as a whole. But, before her untimely death, Diana devoted her life to helping those less fortunate and did it in a way that showcased her true compassion and desire to make the world a better place.

In this article, we’re going to uncover some famous quotes by Diana, Princess of Wales that truly display the incredible woman she was.

The following seven Princess Diana famous quotes show the depth of her humility. No matter her title, Diana Princess of Wales always held a natural connection with the people.

1. Being a princess isn’t all that it’s cracked up to be.

2. Call me Diana, not Princess Diana.

4. If men had to have babies, they would only ever have one each.

6. I’ve got to have a place where I can find peace of mind.

These six powerful Princess Diana quotes will leave a lasting impression in your mind.

9. Only do what your heart tells you.

11. The kindness and affection from the public have carried me through some of the most difficult periods, and always your love and affection have eased the journey.

12. It’s not sissy to show your feeling.

Below are six Princess Diana quotes about life we can all relate to.

14. The greatest problem in the world today is intolerance. Everyone is so intolerant of each other.

16. The biggest disease in this day and age is that of people feeling unloved.

17. When you are happy, you can forgive a great deal.

18. They say it is better to be poor and happy than rich and miserable. But how about a compromise like moderately rich and just moody?

The below six Princess Diana quotes about kindness accurately capture the gold-hearted nature of the people’s princess.

20. It’s vital that the monarchy keeps in touch with the people. It’s what I try and do.

21. Nothing brings me more happiness than trying to help the most vulnerable people in society. It is a good and essential part of my life, a kind of destiny.

22. Every one of us needs to show how much we care for each other and, in the process, care for ourselves.

23. Carry out a random act of kindness, with no expectation of reward, safe in the knowledge that one day someone might do the same for you.

24. HIV does not make people dangerous to know, so you can shake their hands and give them a hug: Heaven knows they need it.

25. I am all about caring. I have always been like that.

Below are eight Princess Diana humanitarian quotes that accurately capture the size of her heart. Lady Diana devotedly spent her life helping others, whether that be those suffering from diseases or those in countries less fortunate than hers.

26. I am not a political figure, I am a humanitarian figure, always was, always will be.

27. Everyone needs to be valued. Everyone has the potential to give something back.

28. Anywhere I see suffering, that is where I want to be, doing what I can.

29. I knew what my job was; it was to go out and meet the people and love them.

30. Whoever is in distress can call on me. I will come running wherever they are.

31. I found myself being more and more involved with people who were rejected by society – with drug addicts, alcoholism, battered this, battered that – and I found an affinity there.

32. It has always been my concern to touch people with leprosy, trying to show in a simple action that they are not reviled, nor are we repulsed.

33. Being constantly in the public eye gives me a special responsibility, particularly that of using the impact of photographs to transmit a message, to sensitize the word to an important cause, to defend certain values.

The following four Princess Diana feminist quotes show the strength of her character.

34. People think that at the end of the day, a man is the only answer. Actually, a fulfilling job is better for me.

36. I think every strong woman in history has had to walk down a similar path, and I think it’s the strength that causes the confusion and the fear.

Below are six Princess Diana quotes about love that show that despite heartache and pain, she never lost the ability to love.

38. If you find someone you love in your life, then hang onto them.

40. If you were lucky enough to find someone who loved you, then you must protect it.

These next six Prince Diana quotes on family show how important the bond between a mother and child really is. Family, by far, was one of the most important things to Diana and her two sons, William and Harry.

44. I want my boys to have an understanding of people’s emotions, their insecurities, people’s distress, and their hopes and dreams.

45. A mother’s arms are more comforting than anyone else’s.

46. Hugs can do great amounts of good—especially for children.

47. Family is the most important thing in the world.

49. Any sane person would have left long ago. But I cannot. I have my sons.

Below are five Princess Diana quotes about marriage that give a unique insight into the mind of the Princess. Her marriage to Prince Charles was destined to fail but the pain and emotions were never fake.

50. I think like any marriage, especially when you’ve had divorced parents like myself; you want to try even harder to make it work.

51. Well, there were three of us in this marriage, so it was a bit crowded.

52. I desperately loved my husband, and I wanted to share everything together, and I thought that we were a very good team.

53. The night before the wedding, I was very, very calm, deathly calm. I felt I was a lamb to the slaughter. I knew it and couldn’t do anything about it.

The following seven quotes from Lady Diana’s divorce interview with Martin Bashir shook the royal family to its core.

One of the most controversial interviews to ever come to light was the interview between Princess Diana and Martin Bashir. During the interview, Diana delved into her struggles with post-natal depression, self-harm, and bulimia, while she also uncovered her husband’s affair and how their marriage ended. These seven quotes cover the most shocking confessions from the interview.

55. Then I was unwell with postnatal depression, which no one ever discusses; postnatal depression, you have to read about it afterward, and that in itself was a bit of a difficult time. You’d wake up in the morning feeling you didn’t want to get out of bed, you felt misunderstood, and just very, very low in yourself.

56. When no one listens to you, or when you feel no one’s listening to you, all sorts of things start to happen, for instance, you have so much pain inside yourself, that you try and hurt yourself on the outside.

57. I had bulimia for a number of years, and that’s like a secret disease. You inflict it upon yourself because your self-esteem is at a low ebb, and you don’t think you’re worthy or valuable.

58. It was a symptom of what was going on in my marriage, I was crying out for help but giving the wrong signals, and people were using my bulimia as a coat on a hanger, they decided that was the problem. Diana was unstable.

59. I think I’ve always been the 18-year-old he got engaged to, so I don’t think I’ve been given any credit for growth. And, my goodness, I’ve had to grow.

60. My husband asked for the separation, and I supported it.

61. My wish is that my husband finds peace of mind and from that follows other things, yes.

Who was Princess Diana?

Princess Diana was the wife of King Charles III between 1981 and 1996, back when he was the Prince of Wales. Before Diana’s marriage to Prince Charles, her family, the Spencers, had an extremely close relationship with the royal family. Diana’s father was an equerry to the Queen, and her grandmothers served as ladies-in-waiting to the Queen’s mother. When Charles was 32 years old and Diana was just 20, they got married in St.Paul’s Cathedral on the 29th of July in 1981. The two went on to have two sons, William and Harry, and after dealing with Charles’ affair, the pair divorced in 1996.

During her time as a princess, Diana devoted her life to helping others. She was passionate about the ban on landmines in war-torn countries, she raised awareness for HIV, AIDS, and leprosy, and she helped young and homeless people in desperate times of need.

Diana’s time in the royal family was no walk in the park, and the princess opened up about her struggles with postnatal depression, bulimia, and self-harm. Sadly, in 1997 while driving through Paris, Diana, her driver, and lover Dodi Al Fayed all died in a fatal car crash.

What Did Princess Diana Say About the Royals?

Although Princess Diana rarely said a word about the royals, in one very controversial interview with the BBC, she expressed that she felt like her personality was taken away from her and the royal machine took her over.

Why Is Princess Diana Important?

Princess Diana was so important because she put her greatest efforts into helping others. During her lifetime, Diana passionately fought for the ban on landmines in war-torn countries and worked tirelessly for AIDS and HIV awareness. Her efforts also expanded to helping the young and homeless, and she relentlessly advocated for leprosy awareness. Although Diana’s efforts to help the world will never be forgotten, what probably made her stand out from other royal family members, was her courage to speak her mind and the truths of her time in the royal family.

Why Was Princess Diana So Loved?

Princess Diana was so loved not only for her efforts as a humanitarian but also for her iconic and glamorous style. Diana mainly spent her time as a princess helping others and doting on her two young children. But, throughout her husband’s affair, she also brought up controversial topics of the royal family and made light of her mental health issues, such as post-natal depression, bulimia, and self-harm.

What Did Queen Elizabeth Think of Princess Diana

It’s no secret that Princess Diana’s time as a royal wasn’t the smoothest, and it’s also fairly well-known that Queen Elizabeth wasn’t the princess’s biggest fan. As Diana’s marriage to Prince Charles grew rocky, her relationship with her mother-in-law also ventured down the same path.

A footman close to the royal family stated that the Queen began to dread Princess Diana’s unscheduled visits due to Princess Diana being extremely emotional and teary. However, when the late princess died in a car accident in 1997, Queen Elizabeth II came out with the following quote.

“She was an exceptional and gifted human being. In good times and bad, she never lost her capacity to smile and laugh, nor to inspire others with her warmth and kindness. I admired and respected her – for her energy and commitment to others, especially her devotion to her two boys.”