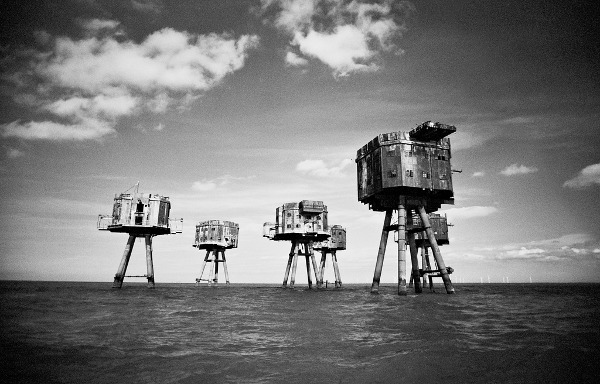 Abandoned Places | We humans are explorers by nature. The quest for discovery, both old and new, is part of what separates us from rest of the animal kingdom. Since the world we live in has been largely mapped and plotted, we urban adventurers turn our sights toward the relics of old and the ruins of the recent past. If you find beauty in urban decay, in the crumbling and abandoned places of yesteryear, you’ll want to read on. Here are 10 of the most amazing, beautiful and creepy abandoned places in the modern world. 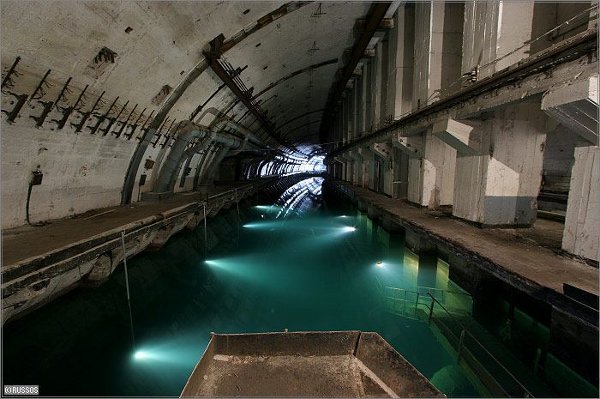 In a bay on the northern shores of the Black Sea, the Soviet army maintained an elaborate submarine base throughout much of the Cold War. Now a museum, this abandoned submarine base in the town of Balaklava, Ukraine is often explored by locals and tourists alike.

During the war, Soviet submarines were constructed elsewhere, transported to this base by rail, then deployed into the Black Sea and beyond for covert underwater operations. The tunnels of the submarine base reached far and deep into the mountain above, providing enough room for many submarines and their crew up through the end of the Cold War. [images via russos]

The Ruins of Detroit by Marchand and Meffre 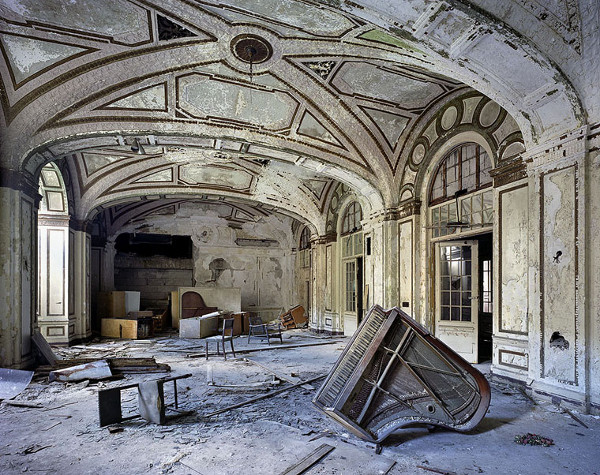 In the United States, few cities have felt the burn of urban decay more than Detroit. To capture its slow fade into history, photographers Yves Marchand and Romain Meffre explored some of Detroit’s dying landmarks for their photo series The Ruins of Detroit.

As the industrial revolution came to a close and race riots crippled a once bustling city, many buildings throughout Detroit fell into disrepair and eventual abandonment. Today, visitors to Detroit can experience two sides of the city– the revitalized, re-invested downtown area, and the empty high-rises and abandoned buildings which crumble around it. 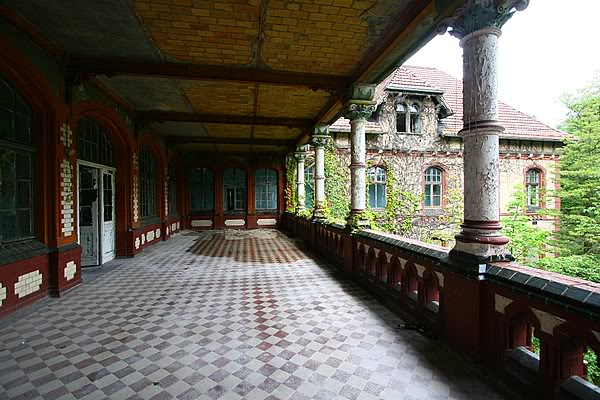 It is rare that a ruin like this should decay so gracefully and without the marks of vandalism. The Beelitz Military Hospital in Berlin is in great condition for a ruin, perhaps for the history it represents. In 1916, a young Lance Corporal in the German army recuperated here after taking a bullet in the Battle of the Somme during the First World War. That injured soldier was none other than Adolph Hitler. Walking these empty halls and cavernous rooms may not recall memories of that fearsome dictator, but a calm and unobstructed view into Germany’s often difficult history. 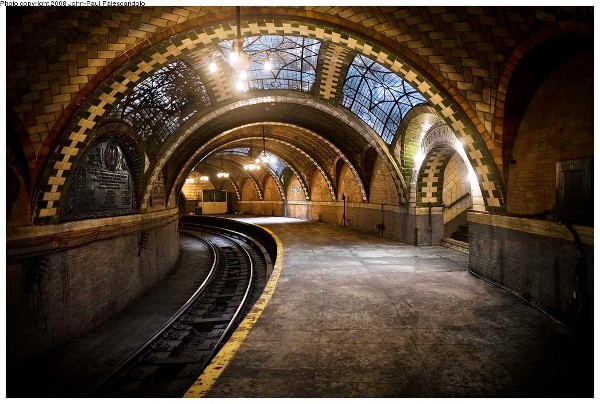 Under the busy streets of New York City rests a perfectly preserved monument to that city’s transportation history. The City Hall Subway Station was first constructed over 100 years ago, a part of New York’s earliest underground transport network. It was shut down in 1945, where it lay dormant and untouched until a one night public exhibition on the station’s centennial. NYCSubway.org and photographer Fred Guenther have documented this event with a great collection of photos, showing this amazing abandoned place in all its pristine, untouched glory. 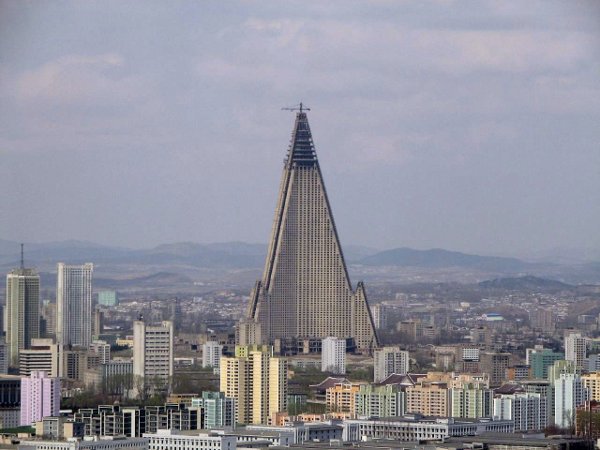 The Ryugyung Hotel in Pyongyang, North Korea is one of the 20th century’s greatest architectural failures. Initially designed as a beacon of progress and power for this misunderstood peninsula nation, the Ryugyung Hotel was unable to sustain construction when the North Korean government simply ran out of money. Ground was broken in 1987, construction was halted in 1992, and the pyramid-style spire sat dormant and empty for sixteen years.

Not a window or an interior fixture graced this skeleton of concrete and metal, it stood only as a reminder what could-have-been for Pyongyang, but instead resulted in failure. Fortunately, the Ryugyung hotel may not be abandoned much longer, as construction resumed in 2008 and the building now has windows and a nearly-completed exterior. Due to the secrecy of the North Korean government, however, it is hard to say if the updates are merely cosmetic or reach further inside this lonely building. 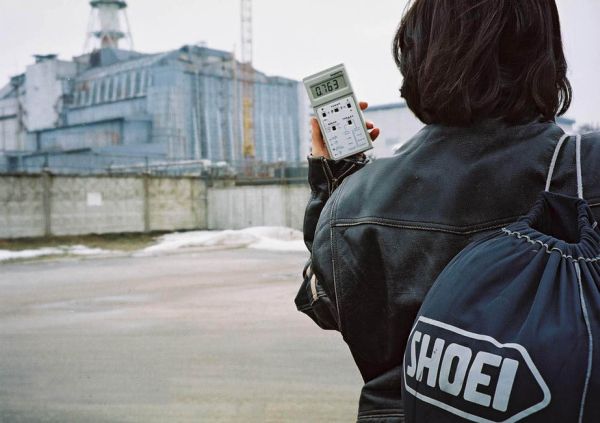 It’s difficult to find a greater metaphor for the rise and fall of the Soviet Union than Pripyat, Ukraine. In a span of sixteen years, the population of Pripyat grew from zero to 50,000 and back down to zero, following the greatest nuclear power disaster in human history. Pripyat was billed as an atomic city, built into the forests south of Kiev in 1970 to house the families of workers at the Chernobyl nuclear facility. After the the Chernobyl failure, the city was abandoned, where it lays empty and closely guarded by police.

The only heartbeat remaining in the city of Pripyat is the rustly click measured by visiting Geiger counters. (if you’d like to see more beyond the gallery below, there are plenty of compelling images on flickr, especially those by Pedro Moura Pinheiro) 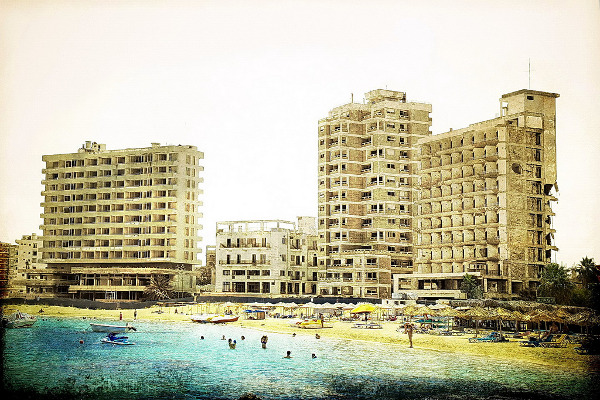 Decades ago, Varosha (Famagusta) on the island of Cyprus was the top resort destination in the eastern Mediterranean. In 1974, the Turkish intervention in Cyprus brought the area under Turkish control, where it remains off limits to modern Cypriots. While the seaside resort buildings remain mostly in tact, the streets and beaches of Varosha remain empty, save for a single Turkish-only resort along the coast. We saw many amazing abandoned structures in our research, but we never expected to see a completely abandoned beach resort. 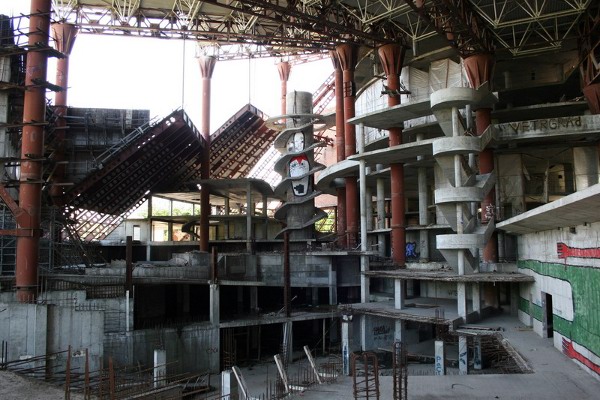 A massive, indoor water park was planned for the children of Russia, one towering many stories high with a myriad of rides within. Yet before this park could be completed, the developer went belly up and couldn’t afford its completion. The structure was to house many pools, water slides and other water-based fun, and appeared to be just months away from completion. The now abandoned water park houses only concrete, metal, graffiti and the curiosity of freelance “urban archaeologists”. 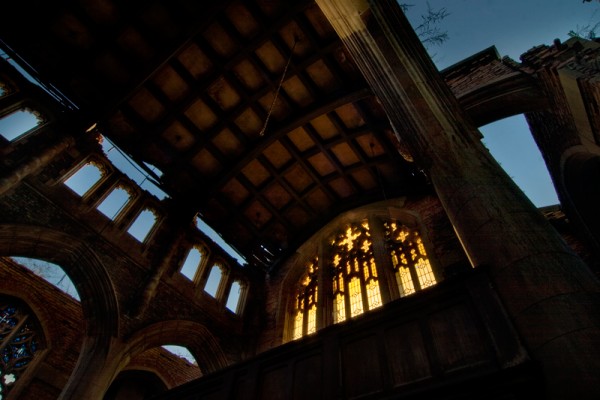 Much like the city of Detroit, Gary, Indiana has been hard hit by the fall of the industrial revolution. While many of its massive industrial factories still operate, hope in the area is very hard to find. Perhaps representative of this lack of faith is this amazing abandoned cathedral. While this church is now empty, its beauty remains.

The arched, cathedral ceiling, the grand architecture of the exterior and the religious iconography carved within might suggest that man has turned their back on religion here, but the opposite is not necessarily the case. (these images come courtesy of the community at opacity.us, one of the best places for exploring abandoned structures across the entire internet) 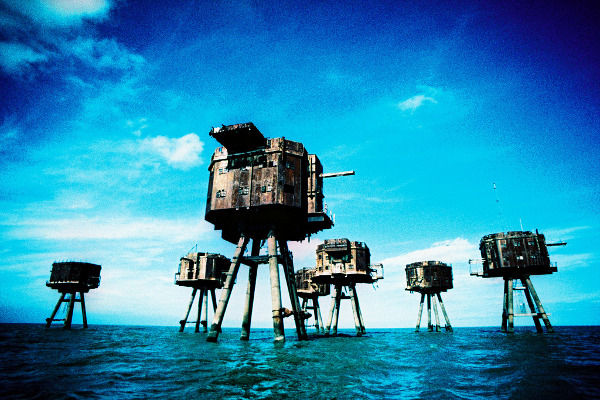 During the Second World War, the British Royal Navy constructed a series of sea forts for an advanced line of defense against inbound air raids and potential sea invasions from the Axis powers. The Maunsell Sea Forts still stand today, silent and abandoned a few meters above the North Sea.

One, however, remains inhabited, now a nation of its own referred to as the Principality of Sealand. These sea forts are a favorite of maritime explorers, a lonely collection of stilted fortresses not far off the coast of eastern England. [see more photos of the Maunsell Sea Forts by slimmer jimmer]

We hope you enjoyed this collection of abandoned places from the world’s recent history. If you’ve ever explored an abandoned place and wish to share your story, we’d love to hear about it in the comments below. In the mean time, thanks for reading, be sure to share this with your friends, and check out these other features on TheCoolist that we’re sure you’ll enjoy.