Mix It Up With The 7 Best Immersion Blenders 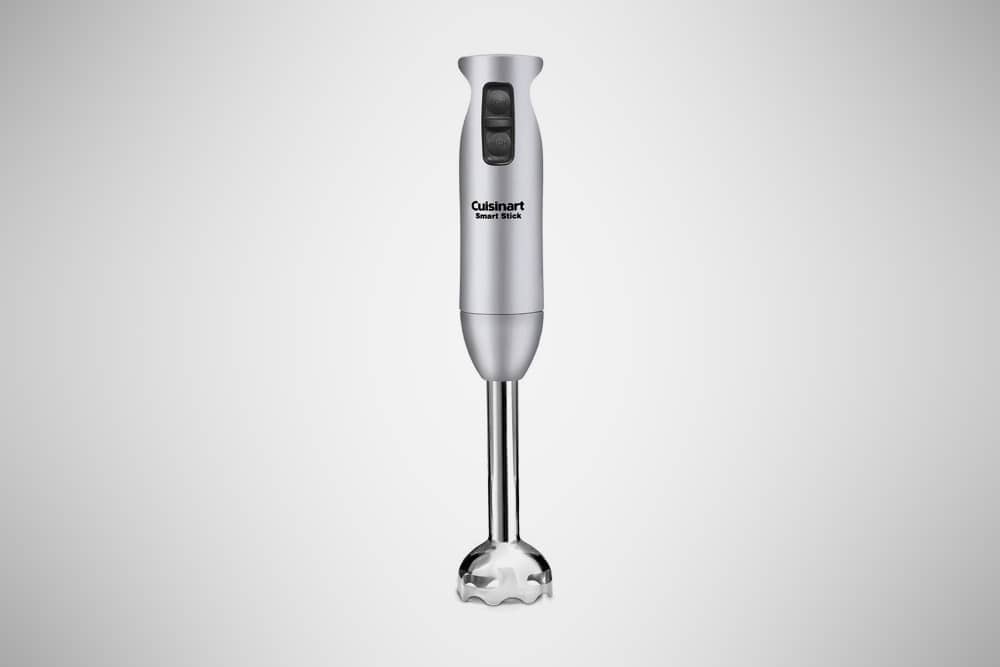 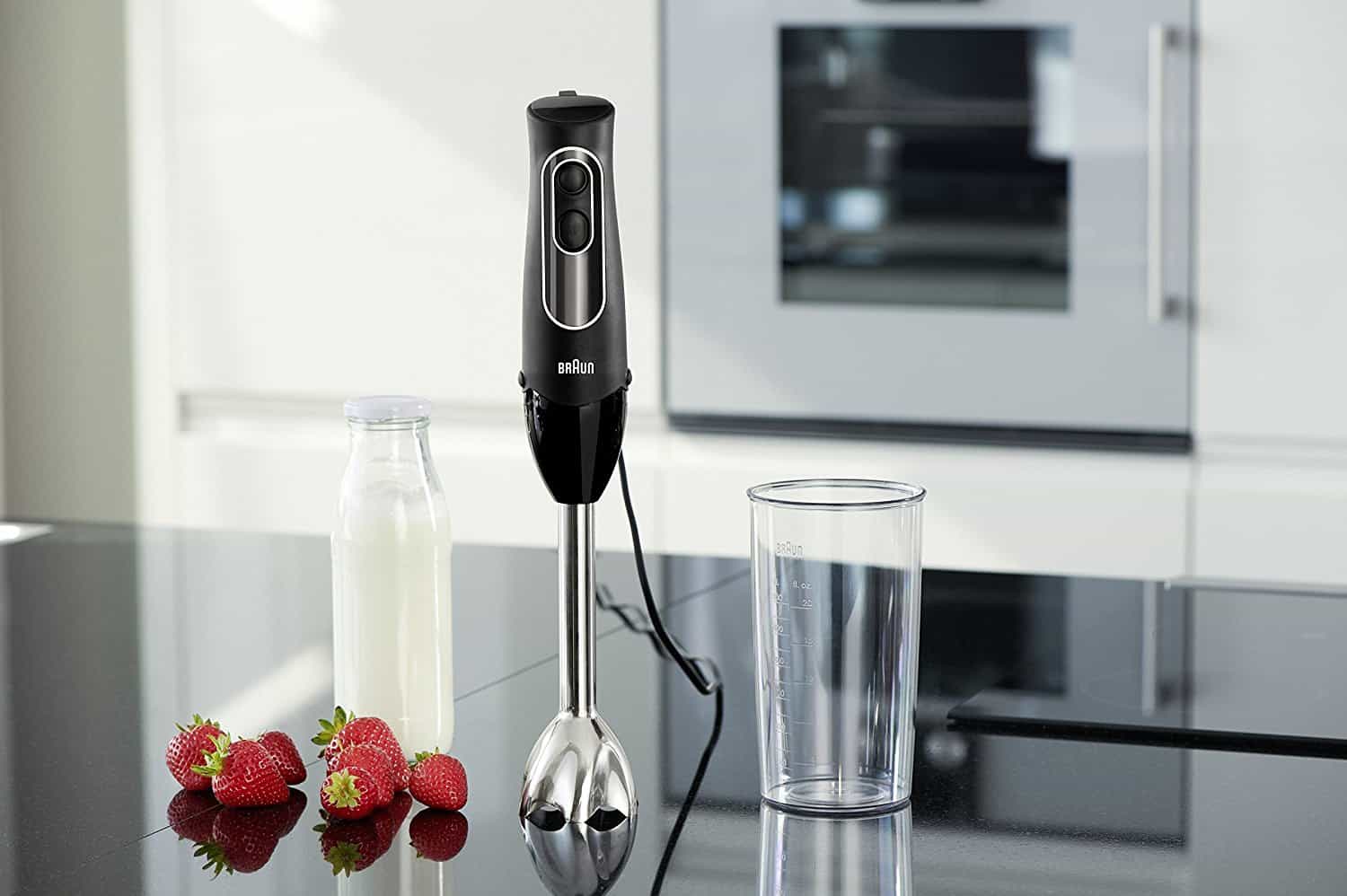 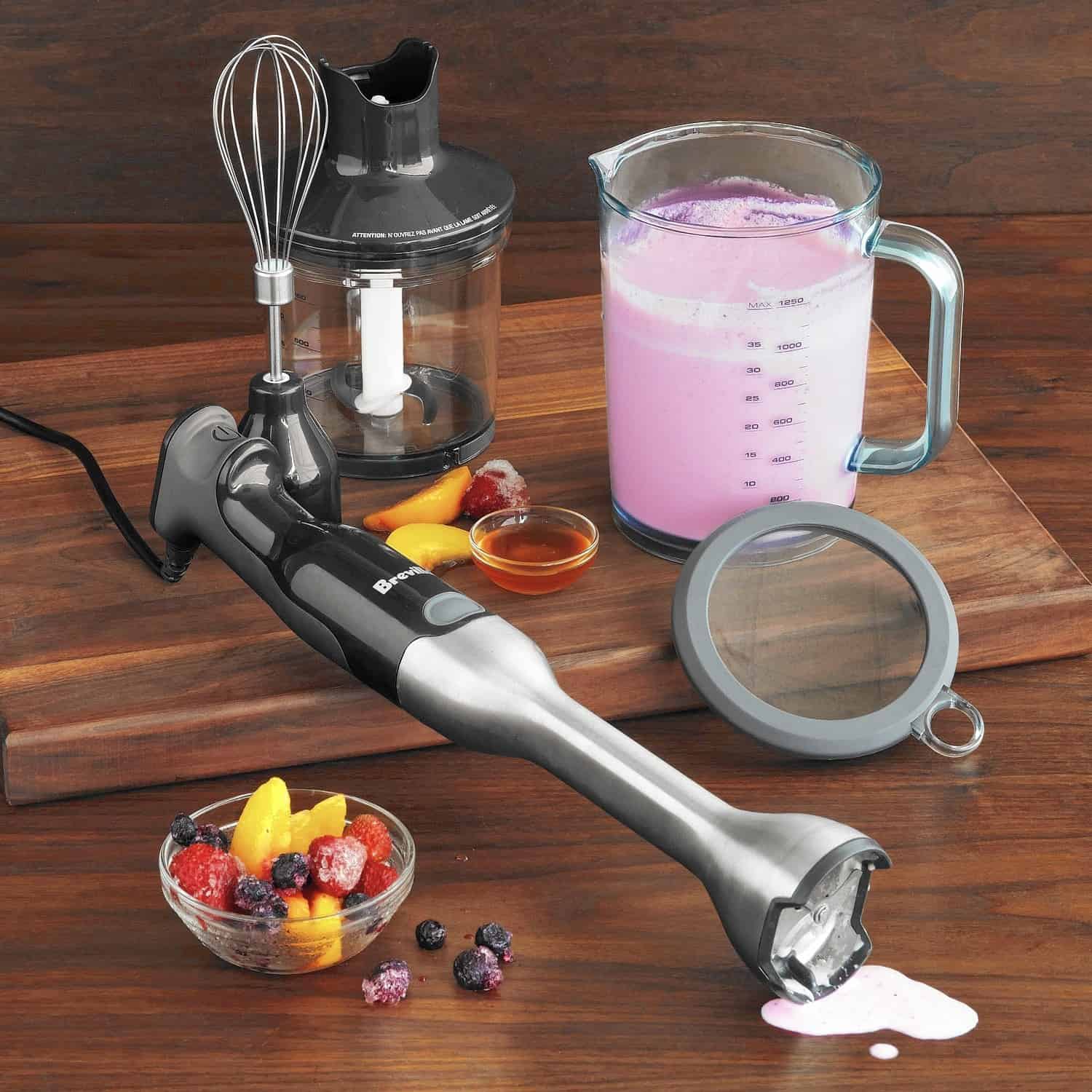 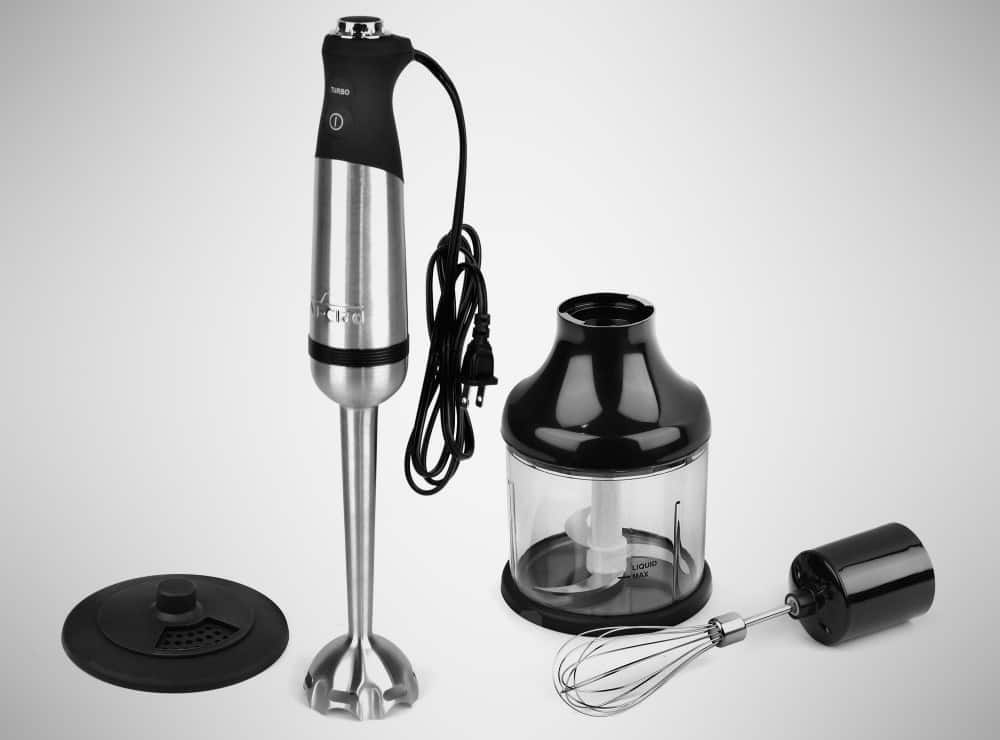 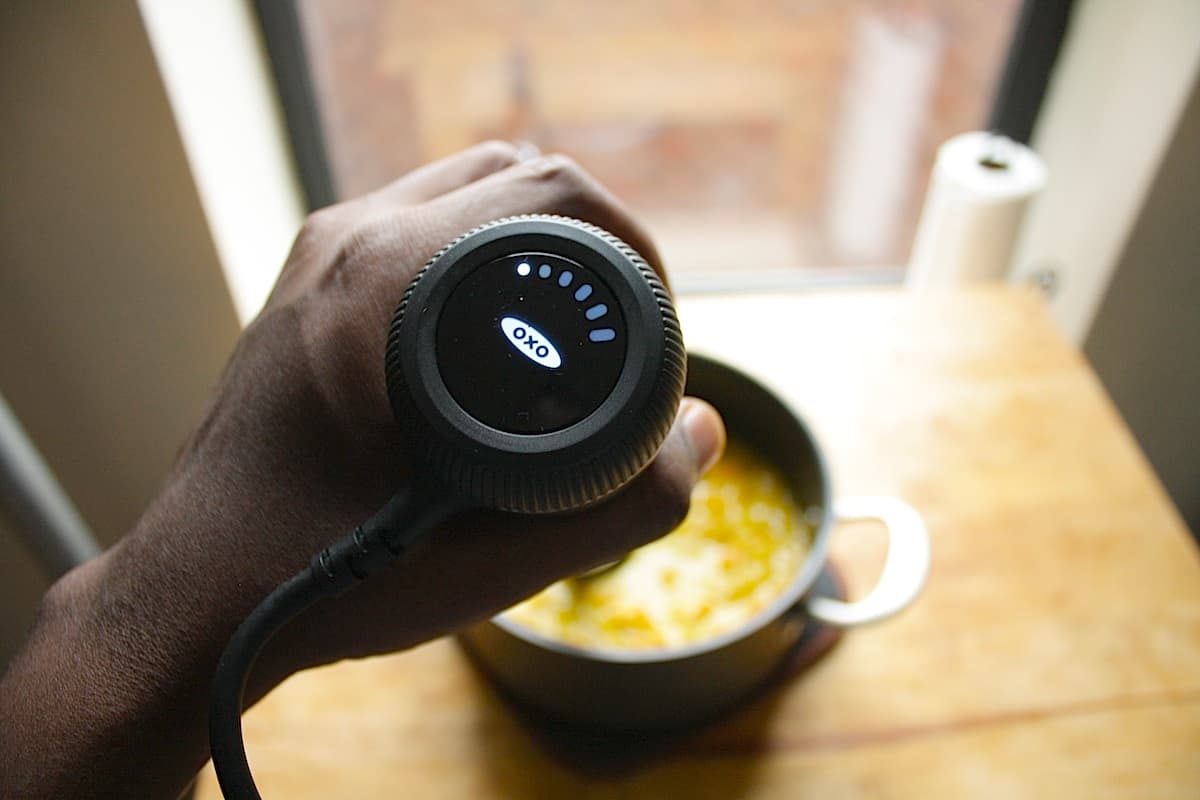 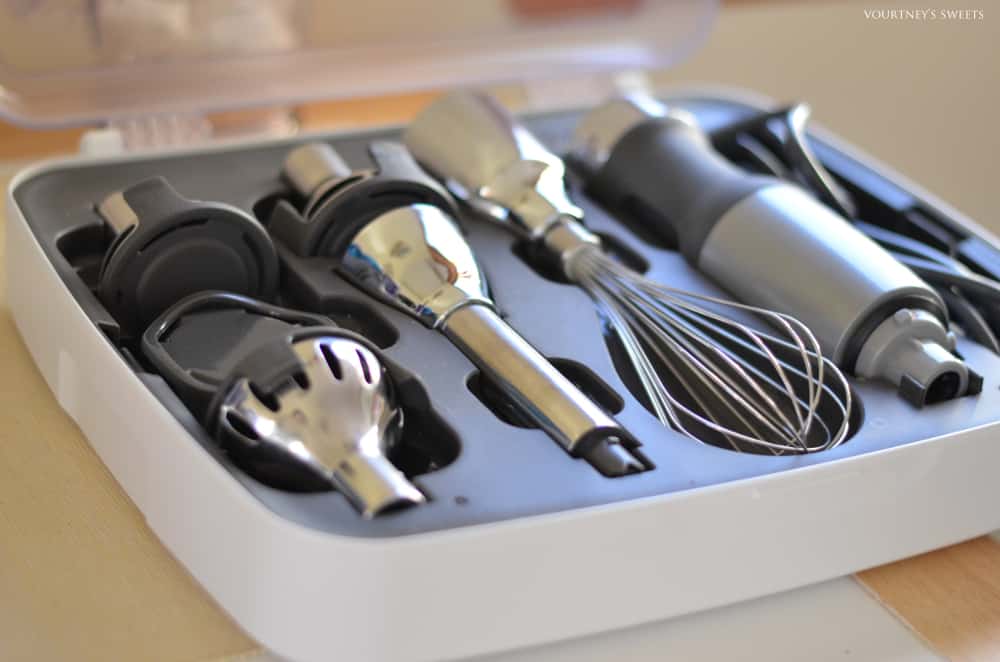 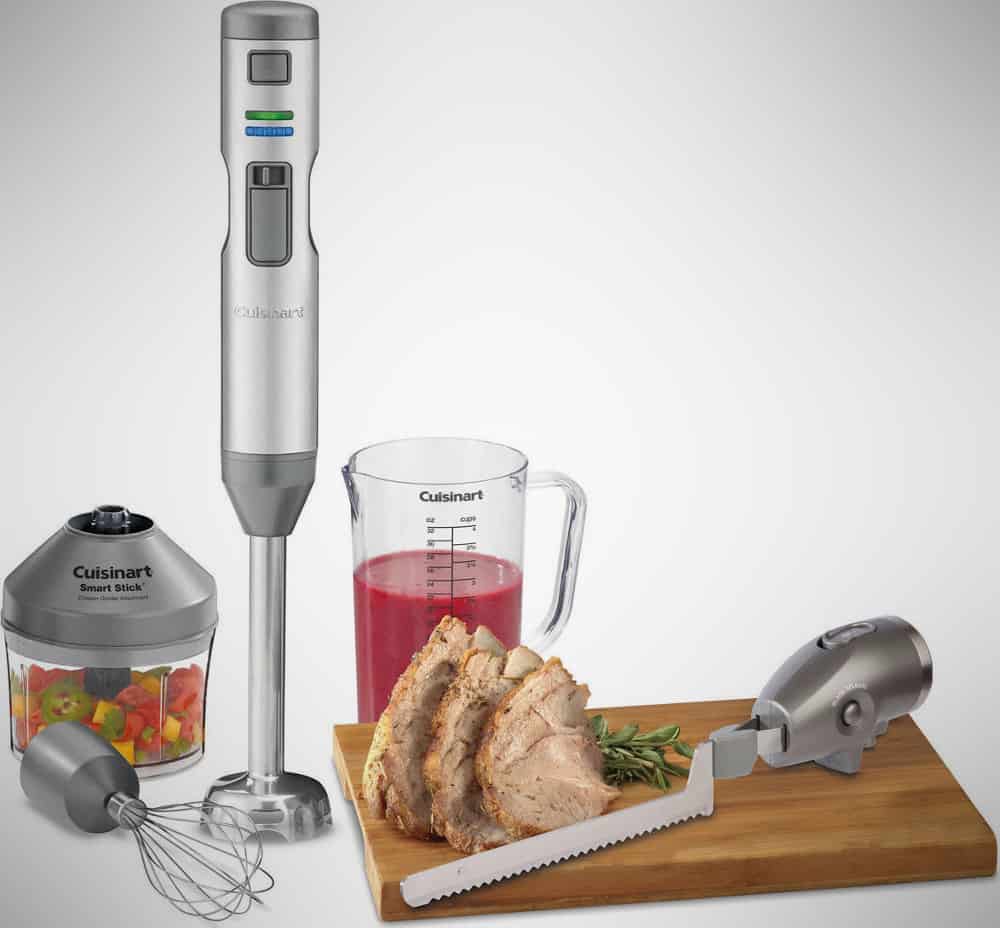 Blending in a glass jug, throwing everything in and letting the motor do all the work is an inelegant way to mulch your food. Think of the cleanup, the endless deconstruction and de-deconstruction of the blender, the storage space, and the cost. If you’re a daily smoothie drinker who needs that, fine, but the way to blend with grace, or process food that doesn’t fit into a quaint little pitcher is to lay your hands on an immersion blender. They go deep, where others fear to tread.

Immersion blenders have an extremely difficult job to do, which leads many of them to do it poorly. They need to be light enough that you can wave them like a wand without tiring out your pilates-infused muscles, but have the power to hack up nuts, slurry your slaw, and whisk like a creamery cauldron. Too much torque, and they’re going to be jarring to use. Too little and they don’t do anything. Though seemingly simple, finding one of the 7 best immersion blenders is a task for gods, not men. Or, women are good at it too.

When you want inexpensive, but are still hoping for a measure of smoothness, Cuisinart is ready to swoop in. The motor is good, and can dig into peanut butter with a little help, though it’s not going to give you a silky smooth mixture. Think of it as the difference between whipped potatoes and mashed. Neither is bad, and the Smart Stick doesn’t leave you with lumps, it merely has a touch more texture to its end result. If you will be whipping this out more than a couple times a month, it helps to invest in something with more grit and longevity. If you’re like most of us and need a small immersion blender to wait in the wings to be called, then spend the slim money on this and tuck it away. When it comes time to churn, this gives you a “Really good for the money!” feeling.

Braun has managed to stay at the head of the pack when it comes to small motor appliances for decades. Though the difference between an electric razor and an immersion blender seem vast, the principles are the same. Given the practice that Braun has had, it’s no surprise that the Multiquick has the agility to be moved around quickly, and pushes the proper power where it needs to go for some fast mixing action. Falling in the No Man’s Land between the costly choices with their surfeit of accessories, and the cheap choices that are nothing but a stick, a cup, and some cutting materials, the MQ505 is better than basic, but not quite ready for integration into your everyday life. Purchase: $59

Smoothness is the goal of the Control Grip which seeks to provide an even whipping mechanism to produce results that don’t look, feel, or taste choppy. Dedicated to a seamless blend the end has extra space so it won’t create suction while working and stick to the bottom of your bowl or pot. Rubberized grips on the outside work to provide a firm hold with either hand, and helps absorb some of the vibrations from the spunky little motor to reduce numbness during long stirring cycles. The speeds and attachments got a lot deeper and wider than most immersion blenders, with everything built to a specific goal for less waste. Perhaps overkill for the standard chef, we suggest getting it and experimenting with the blades and features for mastering new kitchen creations. Purchase: $100

Pure power and torque is what hides under the hood of All-Clad’s ugly little killer. Made to jump into ice cubes, bite through the strings of mango or celery, or whip the hell out of some cream. Tapered from the chunky middle, where the motor lies, the end is easily held by hands of any size, and control rarely gets away from you, even if you have it jacked to the highest setting. The accessories that come along with it are fine, if a little chintzy and cheap compared with the gear you’d get with similarly-priced options, like the Breville. An extremely long shaft helps this reach into big soup pots or family sized pudding batches, though can also make it a little unwieldy for tiny tasks.

Able to puree at speed, the On isn’t as smooth as some, and it really hates anything with a fibrous build, so be wary with squashes, roots, or fruits like coconut. They can bind and clog the On if you aren’t careful. Aside from that inconvenience, the On aims to be the hand mixer for the everyperson, giving you the stick and a cup with nothing else. Should you ache for added attachments and features, you’re generally better off seeking out third party gear than trying to get anything made by Oxo to fit. Simple, inspired design like the silicone coating on the end and the comfortable side grips make the single job that the On aims to do an uncomplicated execution. Purchase: $123

Immersion blenders are kept largely for soup, salsa, and stirring. Most people reach for a traditional pitcher blender for their smoothies, which is what KitchenAid is attempting to change. A murder’s row of bell blade assemblies for cutting up meat, mixing, and all your basic puree needs, it also runs quietly. The handle is soft with a power button that responds with a touch so you’re never accidentally over or under frothing your compound. It’s a good daily choice if you’re trying to go healthy and want something that can hide your wheat grass and whey protein behind delicious fruit flavors. Purchase: $130

Cordless blenders are universally weak. The construction of an immersion blender is such that even wired models are heavy for extended use with a single hand. Add in a battery pack – particularly one that can produce the power needed to chop nuts and grate like a fiend – and you’re talking about a hefty piece of hardware. Though most – and some would say all – fail to give you greatness that isn’t tied to grid, this version of the Smart Stick makes mobility feasible for basic blending anywhere you want. Even more interesting, it works well as a good electric carving knife, as it comes with a cutting attachment for that very task. Inarguably flawed by the nature of being wireless, if you want off the chain, this is the best way to do it.

Check latest price on Amazon
TheCoolist is supported by our readers. When you buy through links on our site, we may earn a commission. Learn more.
Join TheCoolist
100% free, unsubscribe anytime.
Related Reading
Let's connect