20 Best Nerf Guns to Arm Yourself for Cubicle Combat

For over thirty years, Nerf has been supplying arms to bored office workers the world over. In this article, we will look at the best Nerf guns for your office arsenal to help make that 9-5 shift a little more bearable. 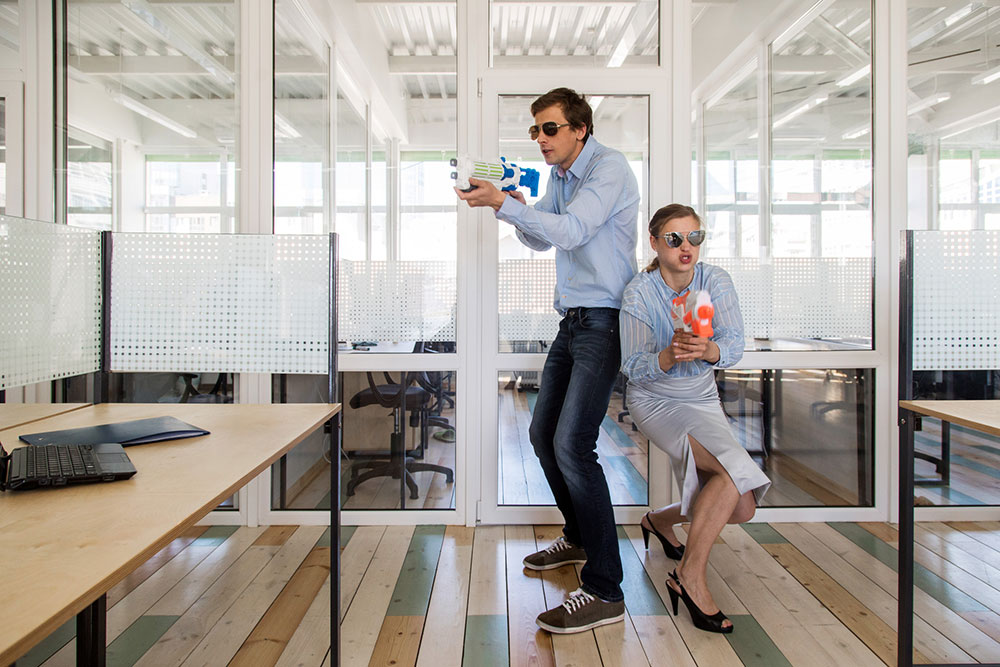 The D.O.D. reports that cubicle insurgency is on the rise. It is estimated that by 2021, everyone in your office will have at least 4 Nerf weapons on hand, with inter-departmental drop points where further armaments can be attained by various factions on maneuvers.

Satellite footage shows that the Accounts Receivable platoon has already stockpiled a cache of foam munitions, and whispers in the war room say that they’re planning a coup against HR, though that’s nothing new.

Short on time before the insurgency? Here are the top 10 best Nerf guns:

If you want to make it in this rat-race, then gunslinger, you’d better lock and load with at least one of the 20 most awesome Nerf guns around. 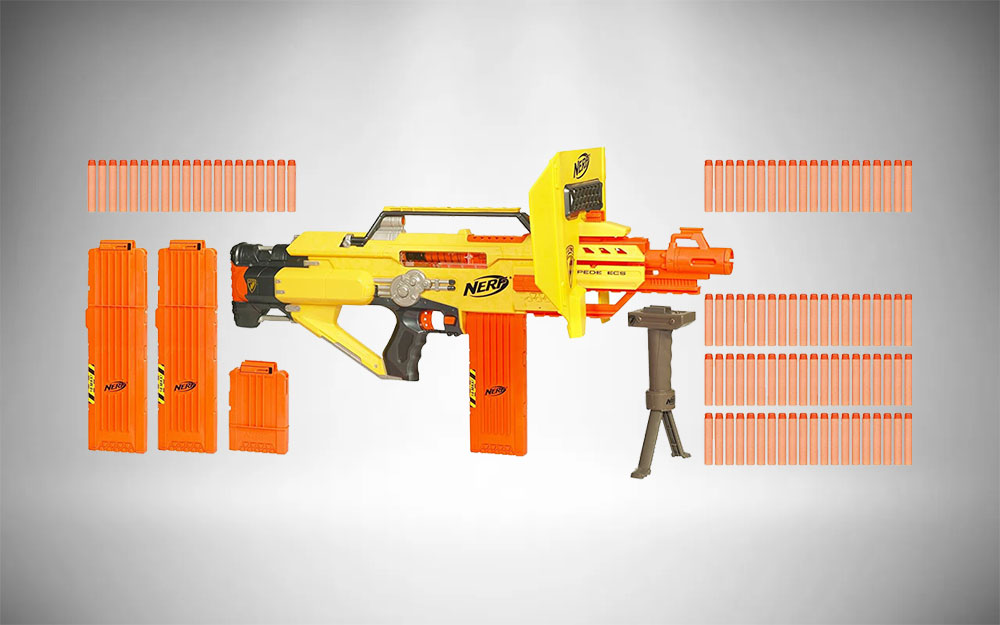 Rapid Response: Fully automatic, the ECS-50 will crank out three rounds per second, without requiring that you load up and cock the gun. Slap in a magazine, and let it chatter away. 18-round banana clips provide as much ammo as you care to carry.

While this gun may no longer be available from the manufacturer, it is still one of the best Nerf machine gun models going, and well worth picking up secondhand. 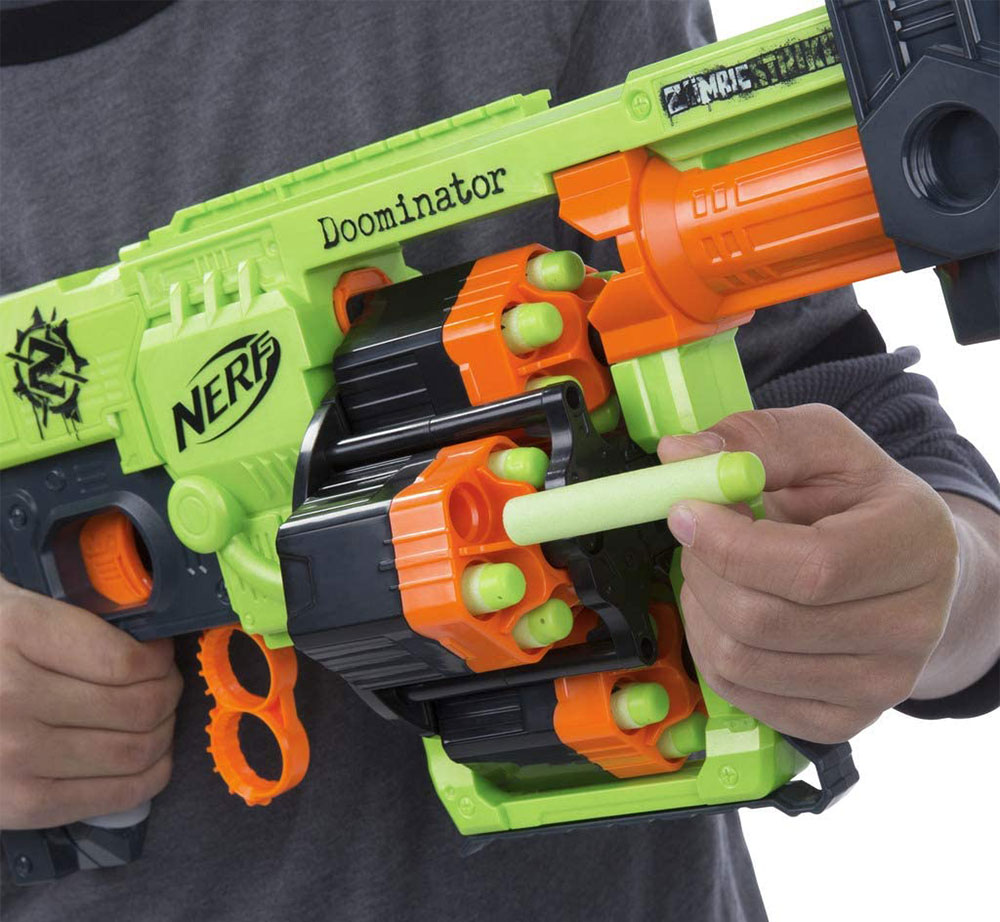 Cock ‘n’ Rock: A best-in-class Nerf blaster for the sheer joy of destruction it imparts upon the wielder, the Doominator has a front handle that can be mounted straight down or on either side, which rotates in a new ammo drum when you’ve burned through one, or adds a pump-action element for Slam-Firing. 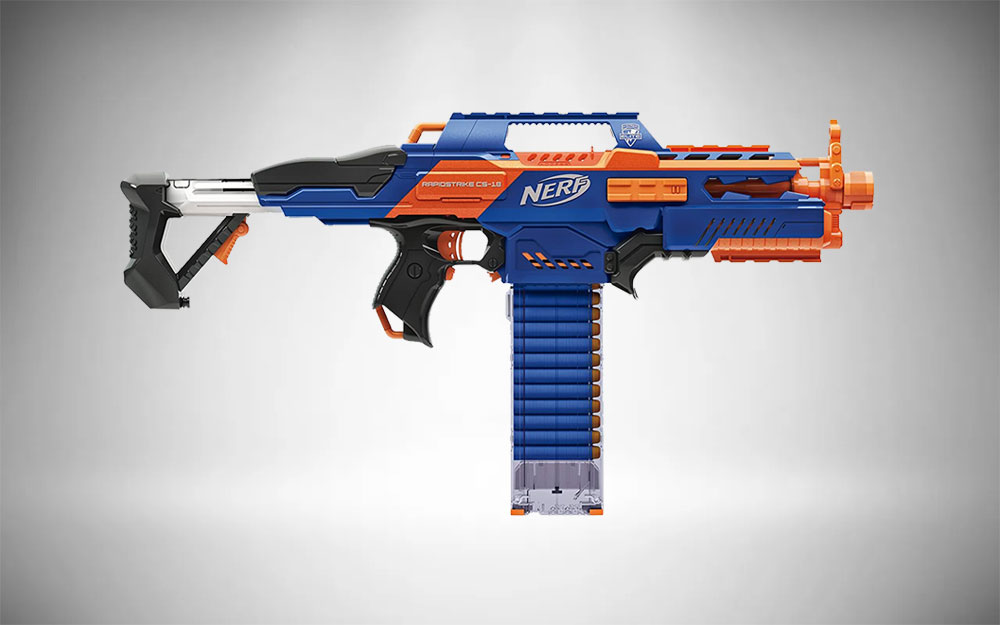 No Waiting: Four darts a second make this even faster than the Stampede listed above, though you’ll encounter a few jamming issues as a trade-off for dealing damage with such speed. Clip-like loading and a tight shoulder stock offer up accuracy and ease in a tight little body. Truly, Nerf Elite guns are not to be trifled with. 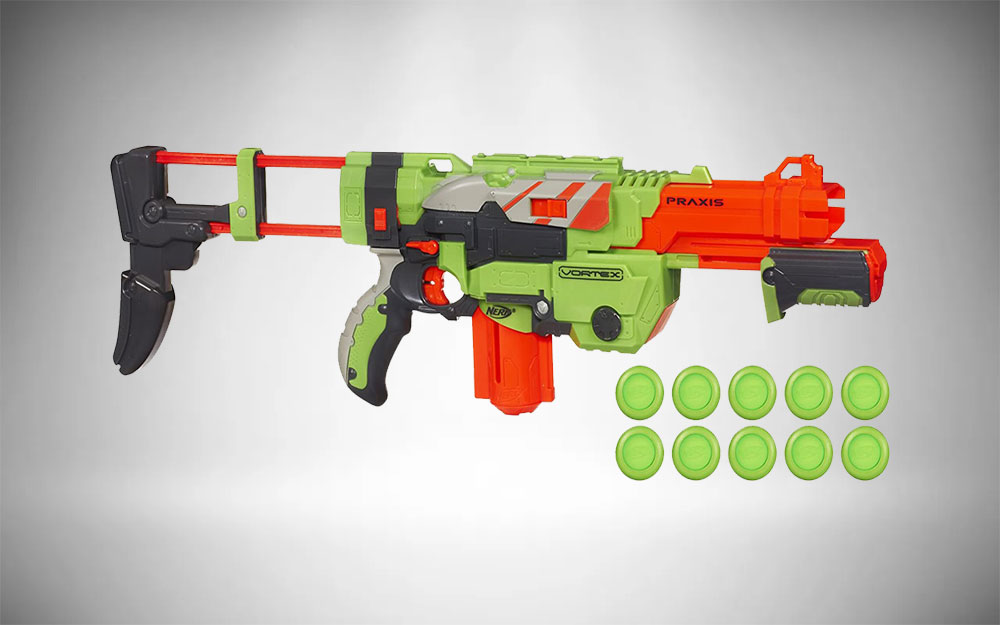 Quick Change: Rather than using foam darts like most Nerf blaster models, the Praxis loads up with green discs that enhance accuracy and carrying capacity. Depending on your style and the combat situation you find yourself in, you can swap it from two-handed to one-handed blasting by extending or dropping the stock. 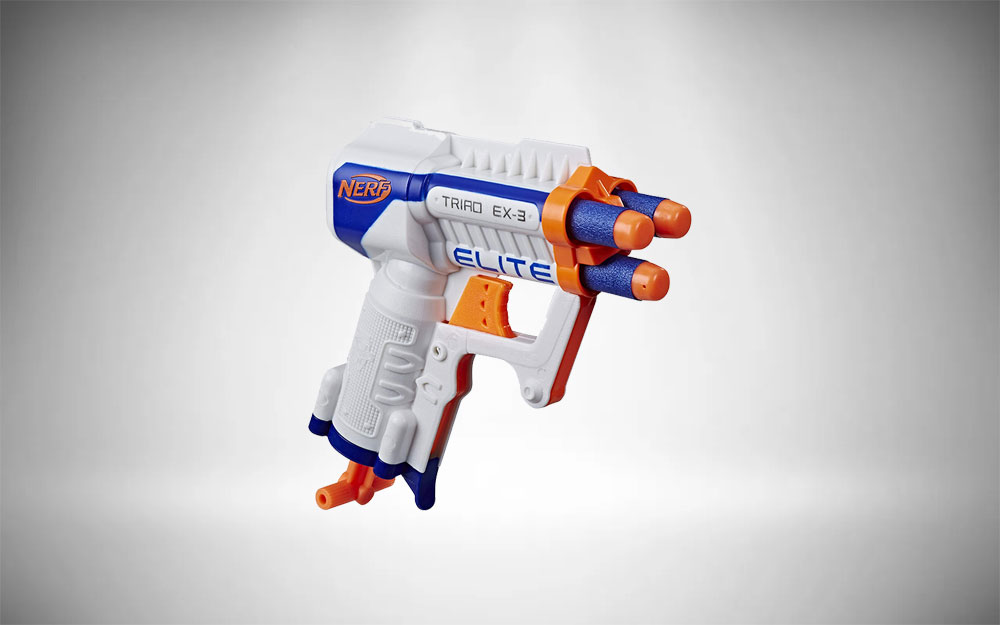 Against the Wall: There’s a couple of Nerf pistol weapons smaller than the Triad, but each carries a single shot; not ideal in a no-win scenario. Keeping three darts on a rotation, with the Triad, you don’t need to adhere to the “One Shot = One Kill” rule. 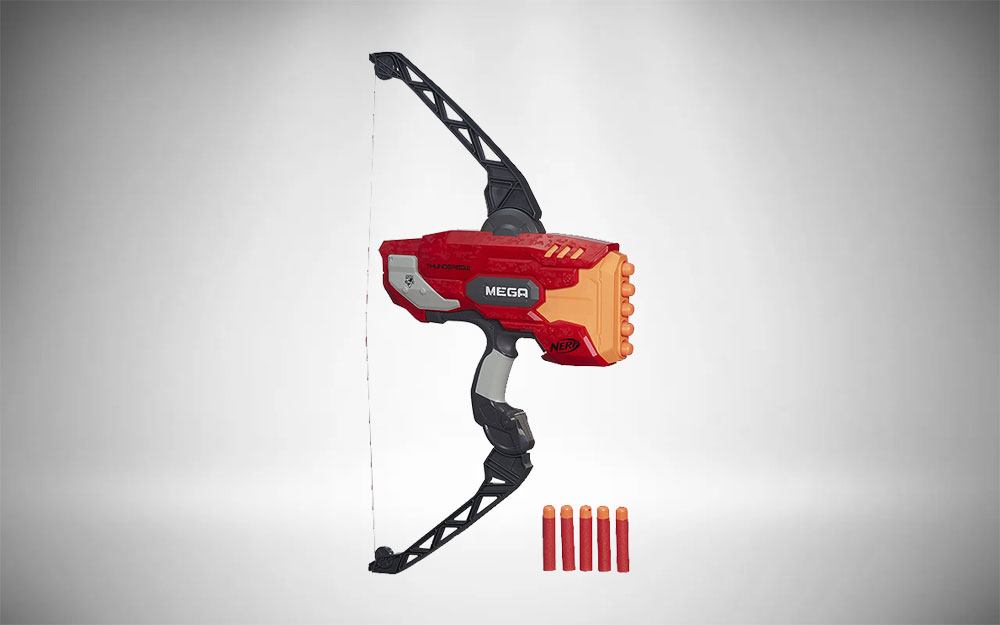 Robin Hood: Though it isn’t as big or as sleek as some of the newer Nerf gun/bow and arrow combos you’ll find on the archery range, the Thunderbow combines range, accuracy, and portability in a way that would make Daryl Dixon think about ditching the cross for a longbow.

Death Dealer: The Rival line of Nerf is intended for older kids, which is why it’s ok that it pops out 40 balls in 11 seconds at 70 mph each. A motorized flywheel gives the Khaos its edge, and will turn the toter into a one-person army. 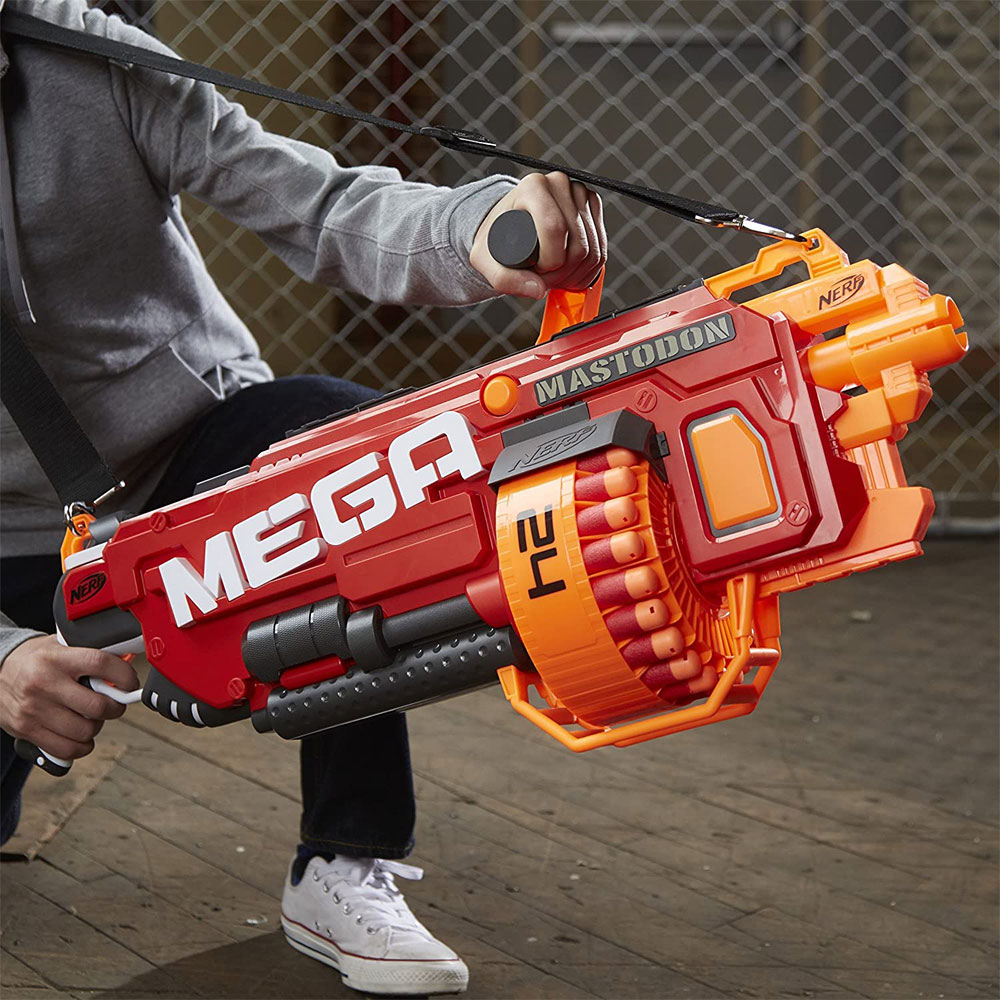 Heavy Artillery: Six D batteries give this a lot of heft, and nearly four feet in size give it a lot of girth; hence the shoulder strap for toting it to the battlefield. Similar to the Khaos, but not quite as heavy duty, you’ll get the standard softer Nerf darts, but a similar deadly flywheel action and automatic fire. It might not be the single biggest nerf gun in the world, but you’re unlikely to find your battlefield peer among the office peons. 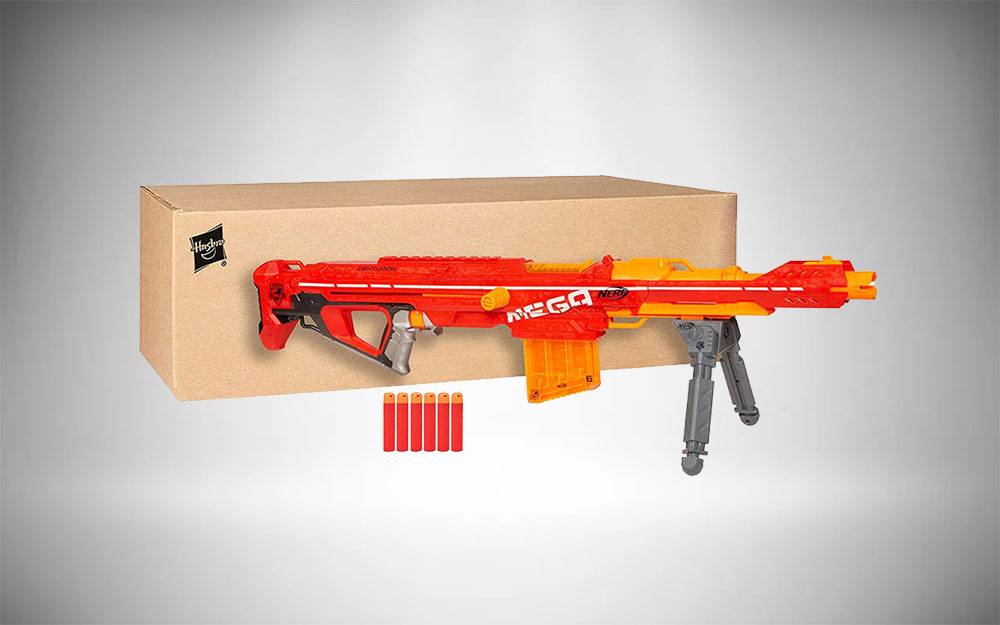 The Man on the Hill: When it comes to the battlefield, not all Nerf guns are made for up close and personal combat. The A3700 Centurian is the perfect ranged weapon for picking off the opposition. Complete with a folding bipod stand to help your accuracy when taking out the accounting department as they make their advance. This Nerf gun comes complete with a six dart clip and boasts a range of up to 100 feet. 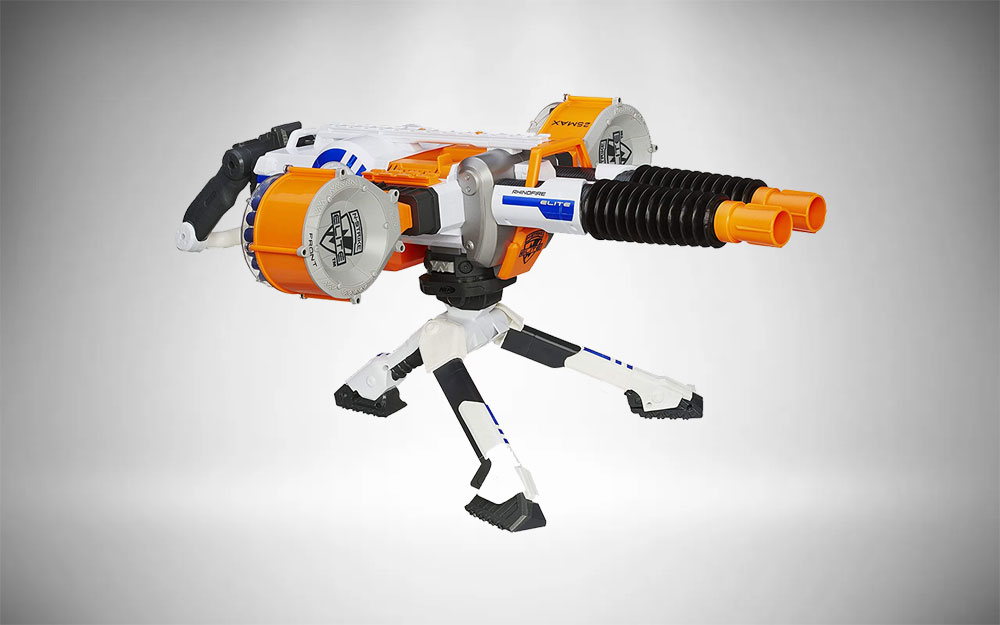 Fixed Position: Carrying around the Rhino-Fire with its dual 25-round drums will make you a walking target. But mount it by your basecamp and you’ll have a nasty turret that feels like a foamy 50-cal mounted in the back of survival truck. 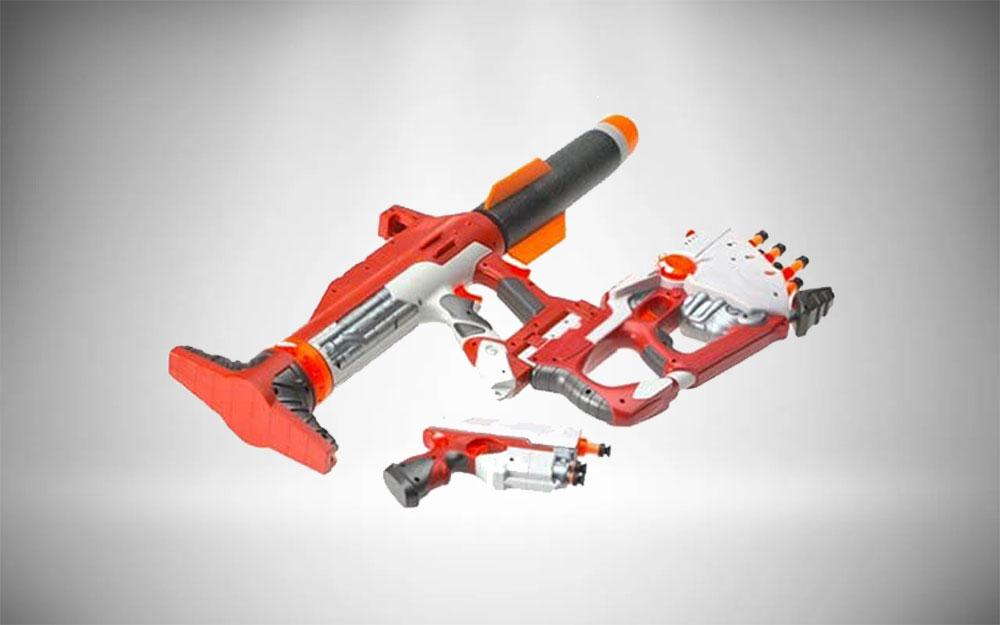 All-Inclusive: Part rapid-fire, close-quarters pistol; part precision mid-range field fighter, the missile launcher is merely the super-destructive cherry on top of this deadly sundae. It takes a little practice, but experts with the Unity are forces to be reckoned with. 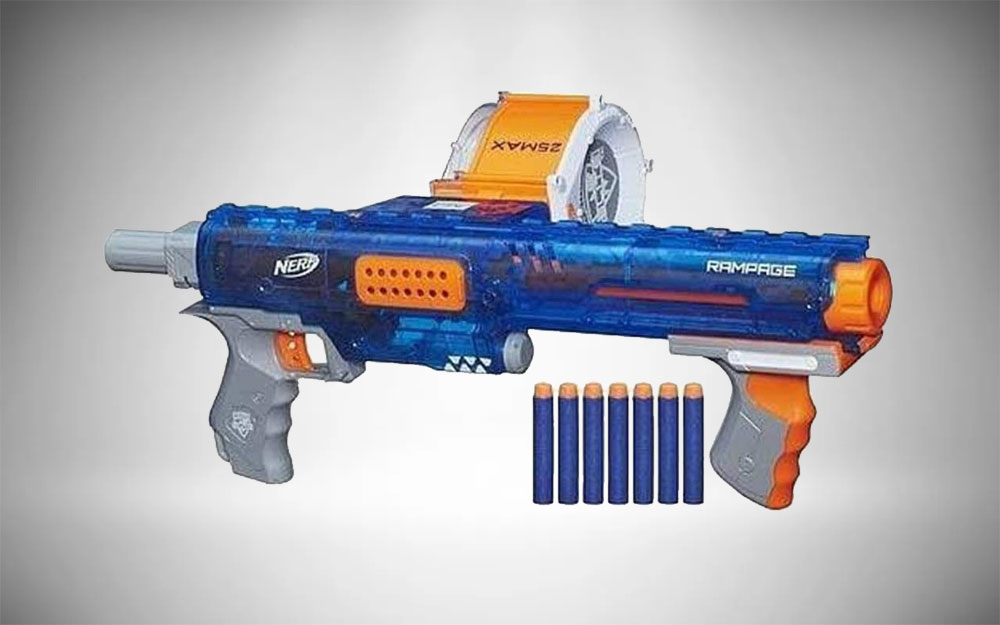 Thinking Solider’s: A primer on the handle lets you prepare the Rampage for combat with ease. And, the slim frame allows for easy movement, even when you add in the 35-round drum on the side. With an accurate single-shot assault rifle, Nerf veterans can make this far more dangerous than any automatic ammo-waster out there. Another one worth seeking out secondhand. 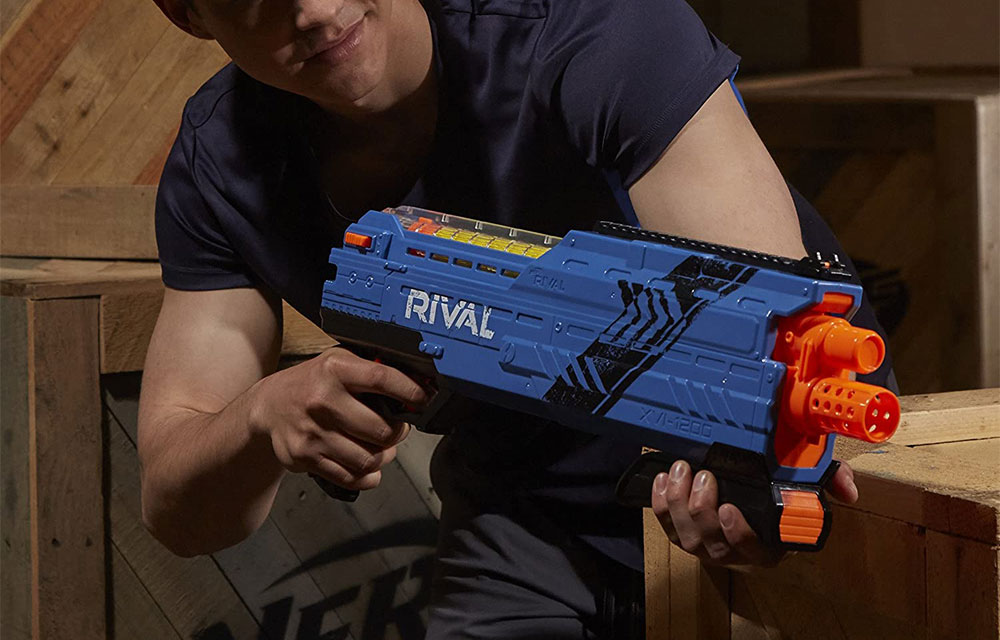 Powerless: The Atlas uses a pump action to shoot, but it still provides the same 70 mph foam attack power that made Nerf Rival guns the weapon of choice for serious firefights. Lighter than its similarly-equipped, mechanized brothers, the Atlas is good for recon, but a capacity of 24 rounds makes it a solid go-to in a straight shootout. 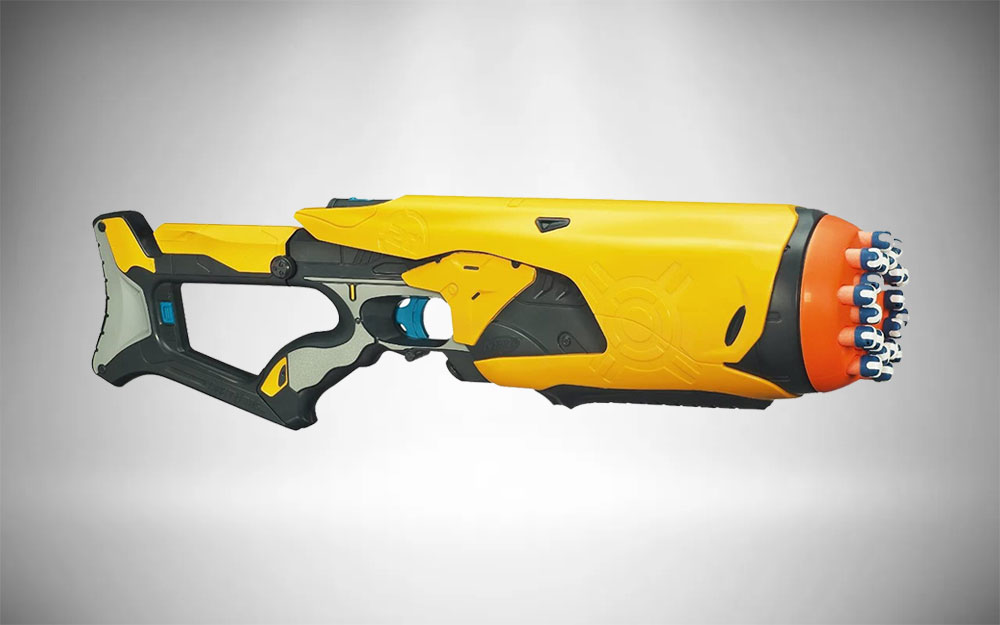 Overwhelming Odds: The Swarmfire is fun to strap on as an oversized sidearm, if you don’t mind the weight of six C batteries. Extend the stock, and you’ll get a whole array of steady shots to put your adversary in their place with a quickness. 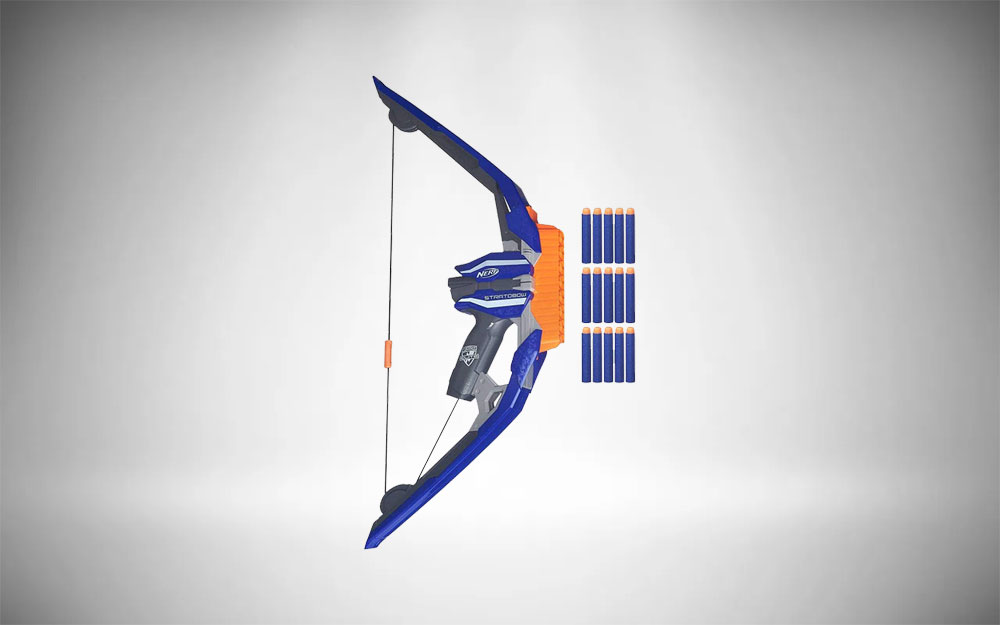 Hand-Speed: The Stratobow is what every lady or lad wants when they ache for the elegance of a bow, but demand the capacity of a rifle. Clip-fed, you can whip out darts as quickly as you can pull the string and reload on the exhale. 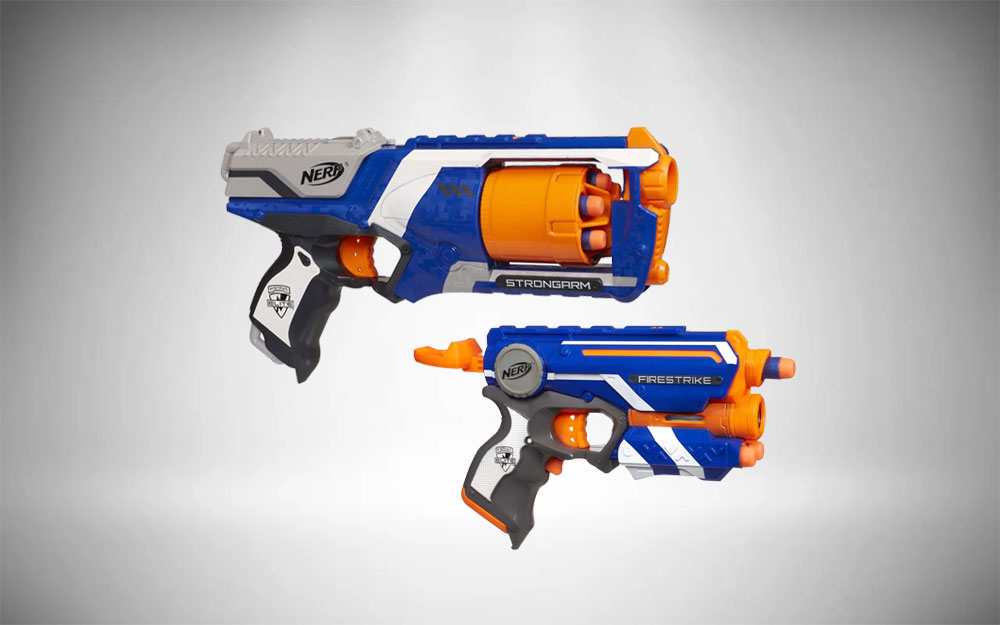 Side Piece: This is a dual pistol set that can’t be beaten for use as a sidearm arrangement. The Strongarm has Slam-Firing capability to throwing down fast, while the smaller Firestrike easily tucks into a waistband for adding the finishing touch to an opponent. 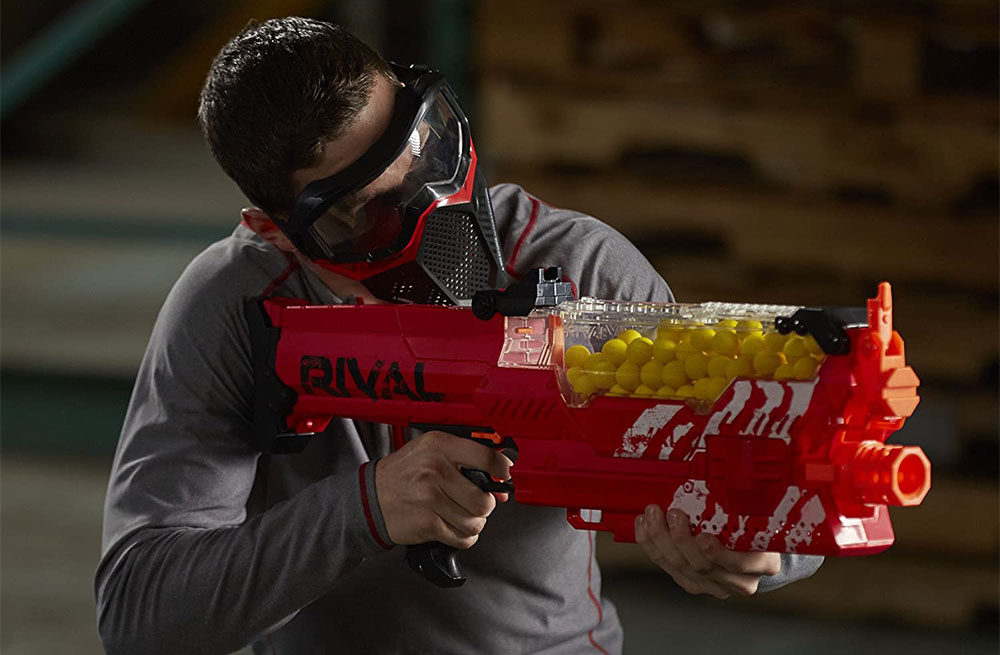 Fully Motorized – If you’re looking for the best Nerf guns, then the Rival Nemesis is a cracking choice. Forget the pump-action guns or the disc-shooters. If you want to be king of the office, you need to invest in fully automatic Nerf guns. This motorized power blaster has a 100 ball capacity perfect for suppressing fire. Whether you are laying down covering fire or mounting an over-the-top charge, this is the weapon you want by your side. 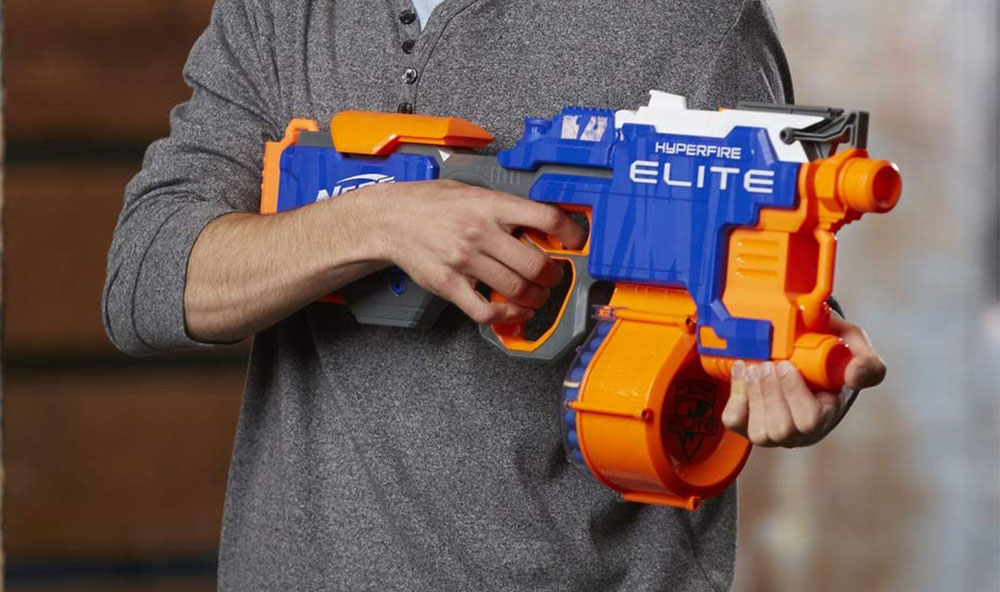 Seconds Count: Spray and pray is the strategy here. The quickest blaster you can put your hand to, the Nerf HyperFire chews through its 25 round drum in a flat 5-seconds. Though a bit unwieldy, it’s balanced well for a mass-shooter, offering more accuracy than you’d expect. 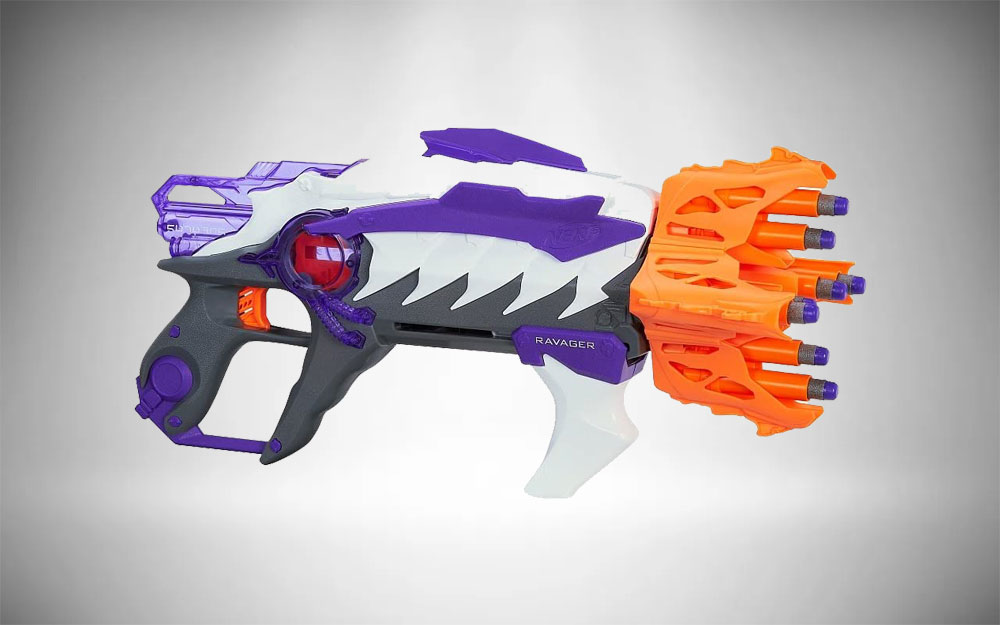 Invading Force: We’ll admit, the Ravager isn’t the finest weapon when it comes to firing, since the large head is the opposite of streamlined, and the eight-round capacity doesn’t impress much. But for style and intimidation, it’s 5 by 5. It doesn’t hurt that it’s inspired by the Halo Needler. 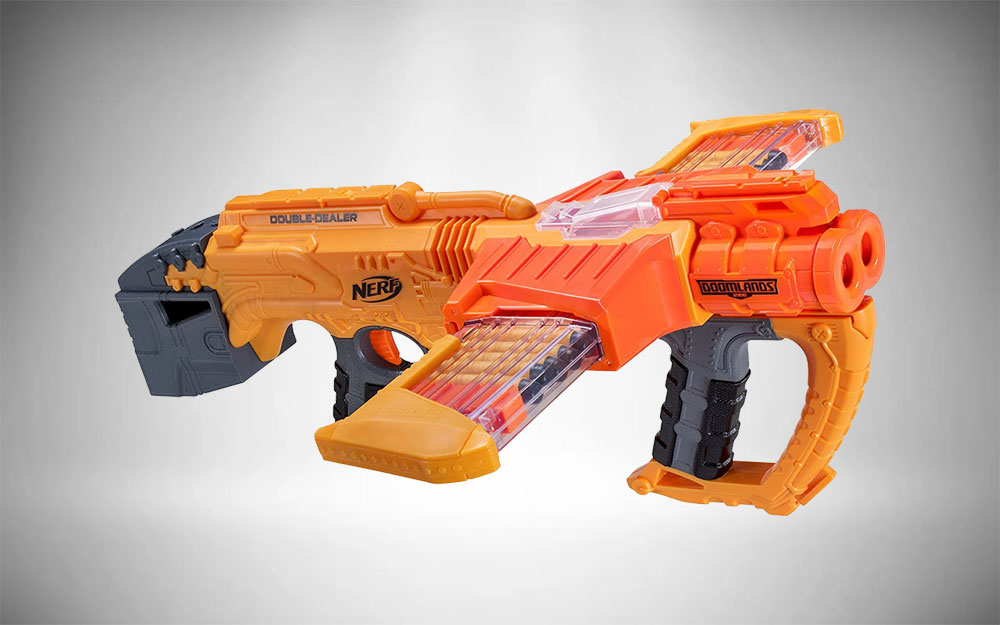 Cross Your Heart: Either a crossbow with the soul of a shotgun or visa-versa, the Double-Dealer is a pump-action feast of carnage. Dual 12-round magazines mounted on the sides keep you stocked with ammo and make reloading a breeze, while the lack of batteries to weigh you down is manna from heaven.

If you’re stumped on which is the best nerf gun for your needs, this quick FAQ will answer any questions you have.

Why Would I Need a Nerf Gun?

Nerf guns have been on the market for over thirty years. They have provided fun and entertainment for families, teens, adults and bored office workers ever since. If you have school aged kids or or if you and your friends are big kids yourself, then you should consider investing in a Nerf blaster or two.

What Style of Nerf Gun Do I Need?

As we have seen in this article, there are many different options available to you. If you are just playing around with your kids or buddies in the backyard, then a smaller nerf gun would probably be ideal. If you want to take things more seriously, then looking at the automatic nerf blasters like the Rival series might just give you the edge. At the end of the day, it’s about having fun, and whichever nerf product you buy is going to guarantee you plenty of that.

Do I Need to Spend a Fortune?

As we have just seen, certain Nerf guns can retail for fairly high amounts. Unless you are going to take your Nerf play super seriously, you do not need to worry about remortgaging your house and living out of your vehicle in order to fund your playtime. There are Nerf guns for sale at a range of prices and to suit all budgets.

Will My Nerf Blaster Need Batteries?

That depends on the product that you buy. Some of the new nerf guns are fully motorized and therefore require batteries to use. If the concept of replacing batteries from time to time doesn’t appeal to you, there are plenty of items in the nerf range that will give you just as much fun without the stress of being left powerless mid-skirmish.

Should I Wear Protective Clothing?

While it might not be essential, it is always a good idea to be safe when playing with anything. Nerf guns do fire projectiles, to a pair of safety goggles will never go amiss.

As you can see, you’re not the only one who takes firepower seriously. We’ve covered a range of Nerf guns to satisfy the casual combatant as well as the office assault troops. Whether you’re in the market for a compact Nerf pistol or high-powered Rival guns, the perfect foam-firing weapon is out there. While we’ve by no means covered every Nerf gun out there, you should have a pretty good idea of what’s for sale these days.

Got any harrowing tales of Nerf gun combat? What were your favorite old Nerf guns growing up? Have you ever shelled out the big bucks for one of the big boys? Drop us a line in the comments below–we’d love to hear from you! 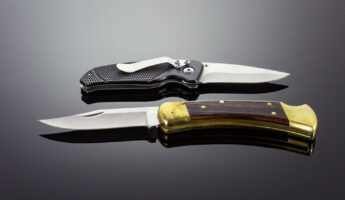 The World’s Most Beautiful Gun Club 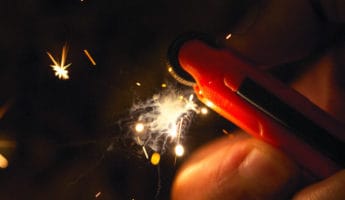 Blaze On With The 14 Best Ways to Start a Fire 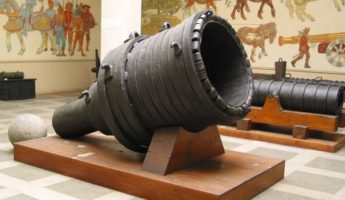 18 Incredible Weapons of History that Made Warfare Weird