J.R.R. Tolkien’s masterworks of fantasy have several unforgettable locales, from Mount Doom to the racially insensitive Minas Tirith – AKA The White City. While each one adds to the tale and might be a fascinating place to visit, you wouldn’t want to live in most of them.

There are a few that are pretty idyllic, including the woodsy Rivendell and Barad-dûr, for those among us who like a good spire. Though nice, nothing has the same appeal as The Shire, home to the Hobbits who largely drive the tales from Middle Earth. Quaint and cozy, there’s few among us who couldn’t enjoy a nice hobbit hole, to the point that several architects have made their own Hobbiton houses.

In celebration of these semi-subterranean abodes, we found 19 hobbit homes that would make any halfling proud.

One of the most famous hobbit holes ever made was crafted by hand on rented property by a man named Simon Dale. This is a sustainable underground dwelling that Mr. Dale dug out, only to be forced to leave after issues with the landlord. He’s since gone on to offer plans for anyone interested in the subterranean lifestyle to make a place all their own.

The current dwelling of Simon Dale, The Undercroft is a slight variation on his original hobbit theme, where he learned from his mistakes and devised an even more impressive house using the same Lord of the Rings notions. Still employing sustainable ideas throughout, including an immense front window for passive solar, The Undercroft ranks as hobbit home 2.0

Built in Matamata, New Zealand for the original Lord of the Rings trilogy, before it was decided that The Hobbit needed to be three movies, these are actually nothing but facades of hobbit houses, since the interior shots were done in a studio. However, they now house sheep of the locals, because that’s how New Zealand does things.

Made to order by a family-owned and operated business, Wooden Wonders will let you get a chicken coop, a shed, or a cottage from their wide range of building options. They can do it above or below ground, depending on your specifications, and each one brings a little bit of fantasy that has your personal touch all over it.

The Shire of Montana

For a scant $245 a night, this Shire reproduction crafted by Steve Michaels and his wife Christine can be yours. They’ve gone for the deep cuts to make every space feel as fanciful as possible, even creating benches and environmental additions that add special Shire flair to the thriving metropolis of Trout Creek, Montana.

That plain white exterior surrounding the lagoon in Dietikon, Switzerland is deceptive. Duck inside one of these Earth Houses built by the Vetsch Architektur firm and you’ll be treated to domed ceilings, wide, luxurious floorplans, and space to spare, littered with modern conveniences. The same firm has continued this building style and now boasts more than 90 houses in the eco-friendly hobbit style.

Made in 1975 with no direct intention of emulating Tolkien’s description of The Shire, William Morgan’s Dune House nonetheless conjures up images of the squat residents of Middle Earth. A dual room pair of domiciles measuring 750-square-feet apiece, these land somewhere in the gray area between science fiction and fantasy.

For approximately $42 a square foot, you can order a Green Magic Home, which brings the joy of cave dwelling into the 21st century. Cut to your specifications and complete with wooden doors and windows, there’s no end to the ways you can build a Green Magic Home. From tiny to immense, each design works with the natural environment while never skimping on contemporary luxury.

Probably the most impressive piece on this list, Peter Archer loved Tolkien’s work so much, he just couldn’t help but re-create it to his own specifications. Though it might not slink under the turf like most hobbit houses, it captures the fantasy essence in every curve and lovingly crafted rafter.

Partially a private rental, but also a live-in art gallery, the adobe structure works perfectly with the powerful Santa Fe heat, and the location can’t be beat. It’s a short trip to the Santa Fe plaza, making it far more urbane than the traditionally bucolic hole-in-the-ground.

Hobbit-inspired in theory only, Villa Vals in Switzerland is proof that the future lies beneath the surface, not in the skyscrapers reaching into the clouds. Full of Dutch art and architecture by Bjarne Mastenbroek, this is where Durin would dwell were he to jump off the page.

The Hobbit House in the Cotswolds

An abandoned place that only needs a little TLC and a lot of indoor plumbing, this stone house is as lovely as it is dangerous.

A new trend among those who are tired of heating their aboveground living quarters during the brutal winters, Turf Houses make sustainable hobbit/viking living a vogue notion that is also good for saving money on insulation, should you reside where extreme weather is the norm.

While most of the tidy, quaint, tiny spaces we found tended to aim for cute, there’s something a little grim about the Mushroom House. Quite appealling if you dig either goombas or ingesting psilocybin for recreational purposes.

Part of the Shire structure in Trout Creek, Montana, this works to capture the exact nature of the place where Bilbo penned his masterwork “There and Back Again” before the One Ring started to flay his mind.

Washington state is known for its indomitable greenery, and Orcas Island takes that legendary foliage to extremes. Rather than dipping under the landscape, this is more like a Hobbit Cathedral set among the trees.

Beneath a mound in the UK, bearing a mirrored surface is this modern-art take on the suburban subterranean space. It digs greedily and deep to offer a spacious abode that virtually disappears like a trapdoor spider.

Built on a private peninsula overlooking the Mount Hartman Nature Reserve where the rare Grenanda Dove makes its nest, this is a rental to remember that is as much luxury hacienda as it is fantasy villa.

Built by dress designer Kristie Wolfe for a pittance, this is our favorite choice due to the painstaking artistry that Ms. Wolfe brings to everything she does. Appropriately placed in the kingdom of Hawaii, there’s few places more mystical and serene in the world. 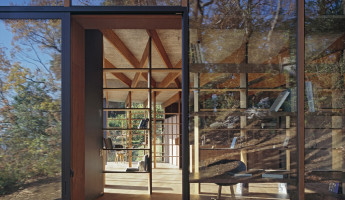 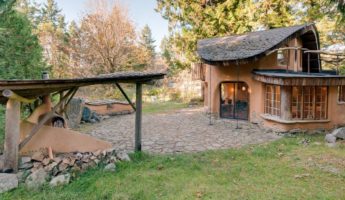