of 10
It's Another Glorious Morning for Some Hocus Pocus - via People
Oh Cheese and Crust Thee Young Foolish Children - via CNN
It's Always a Glorious Morning for Hocus Pocus - via Movie Screencaps
Oh to be cursed with such idiot sisters - via Teen Vogue
They'll Put a Spell on You! - via Exbulletin
Billy Butcherson The Unsung Hero - via WeChoiceBlogger
Anything can Happen on a Full Moon
These Sisters Always Wanted a Child - via
The Story of Three Young Children and a Good Zombie - via
Those Brooms Look Terribly Uncomfortable - via IMDB
58 Hocus Pocus Quotes to Bewitch, Beguile, and Bedazzle
Buy Now 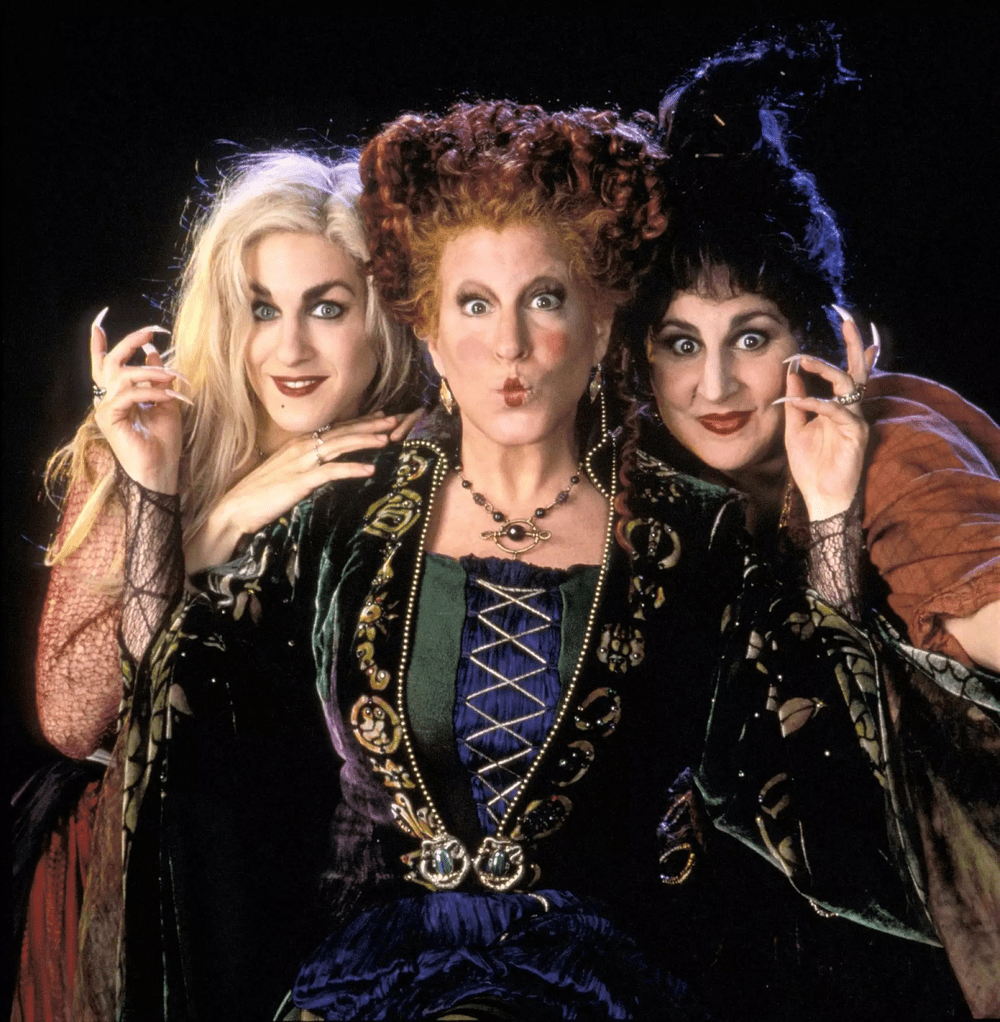 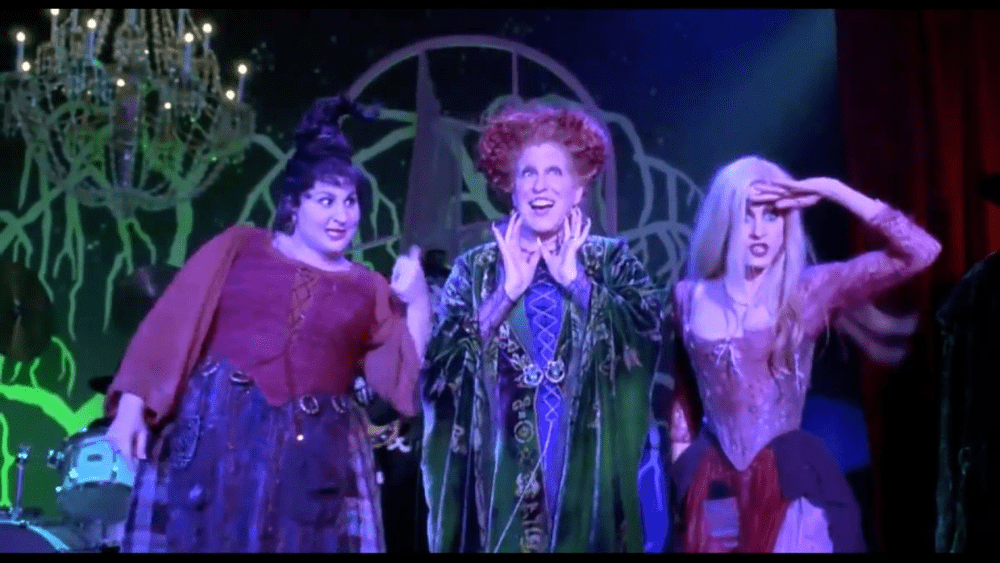 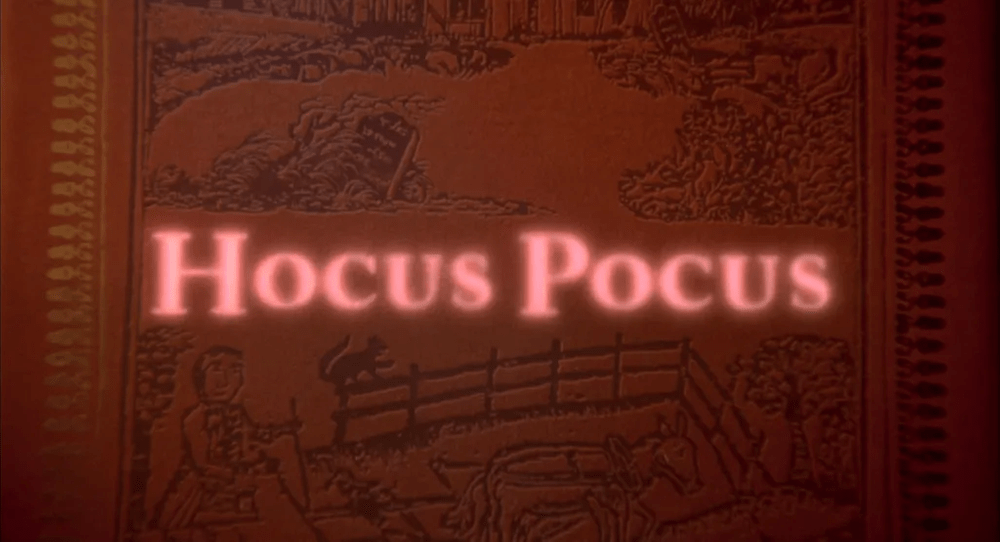 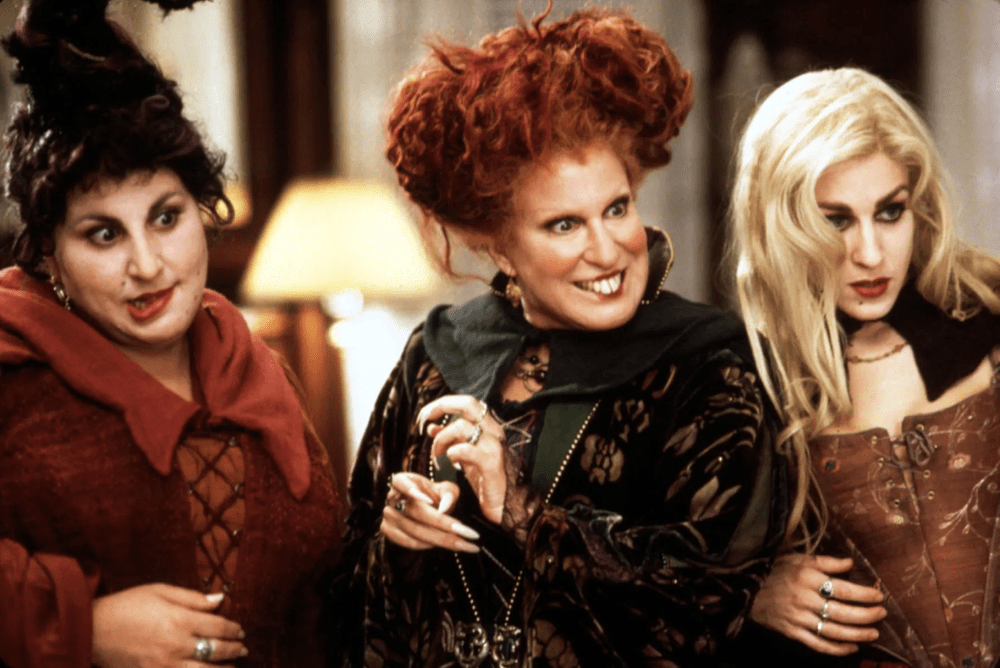 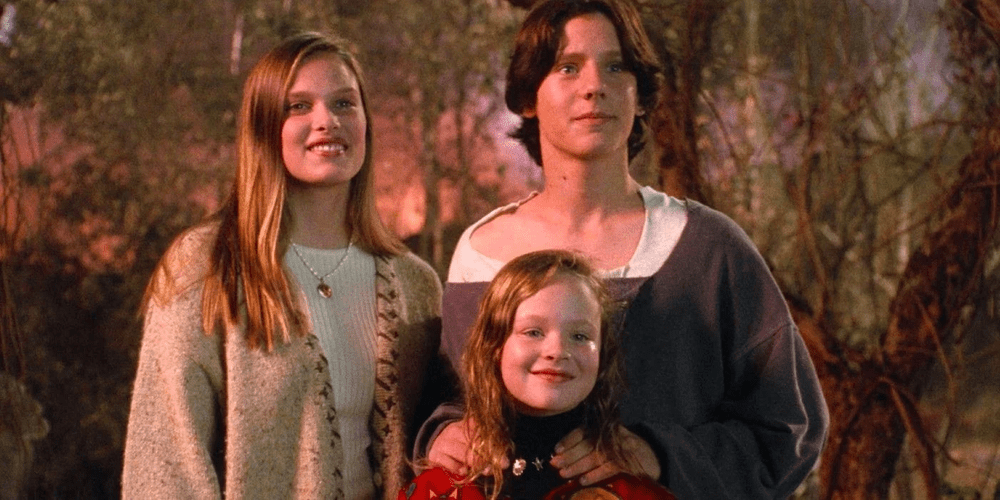 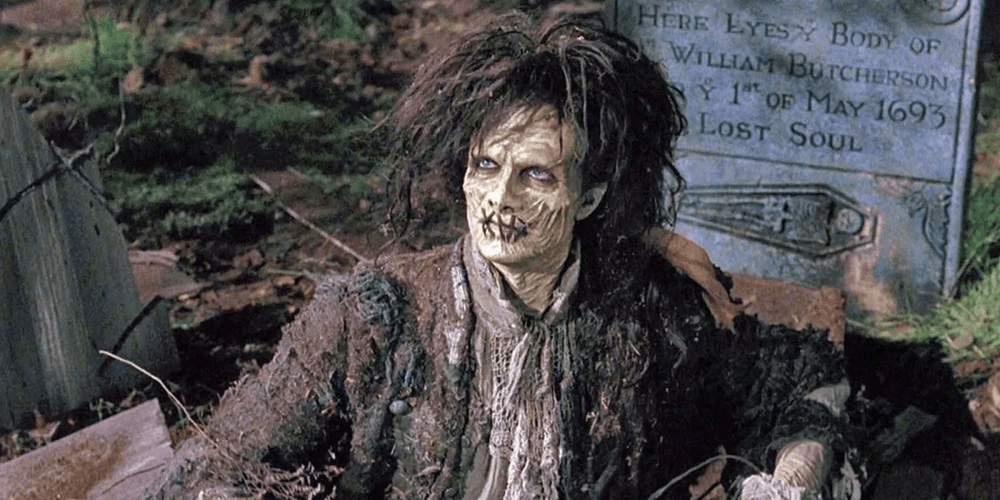 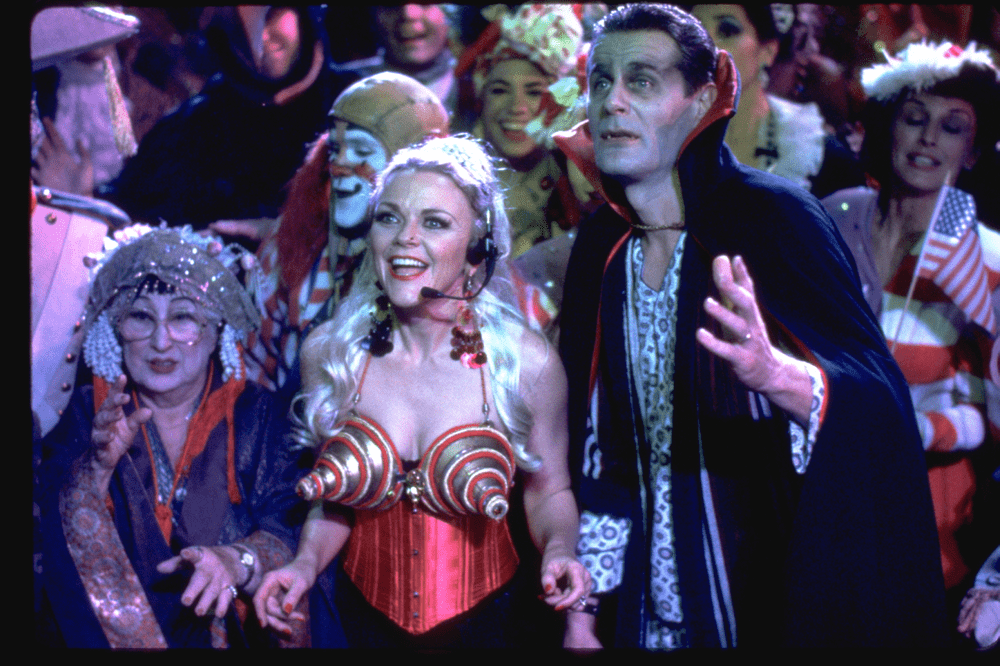 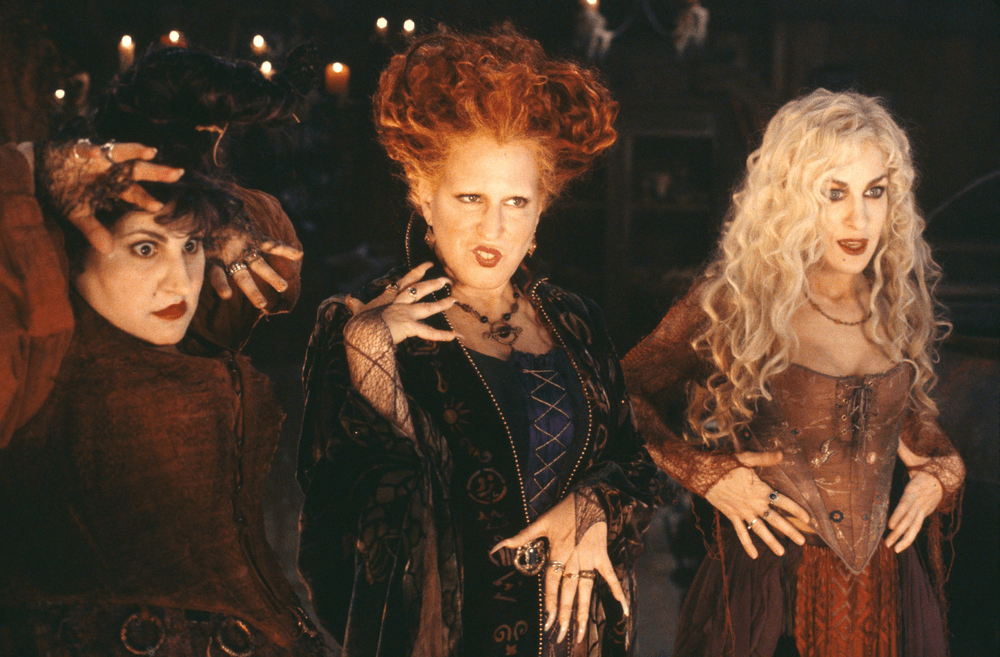 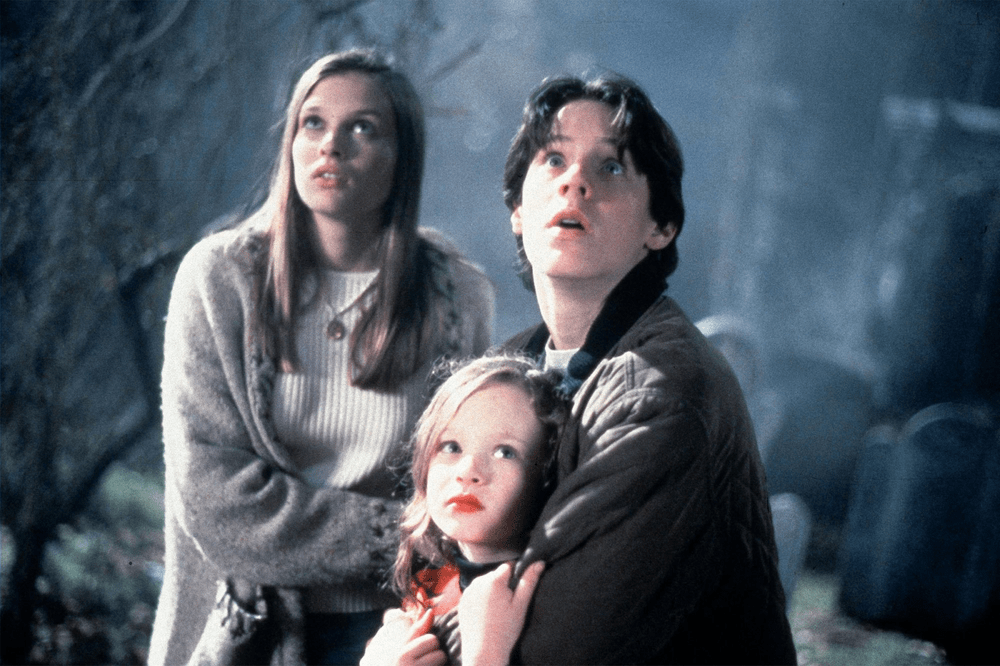 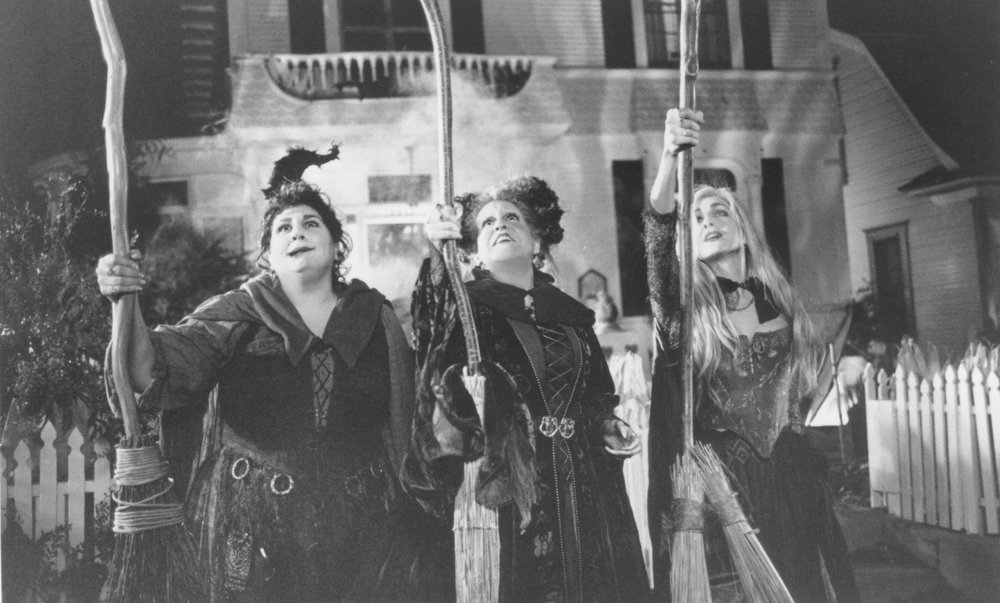 And though we may lack a virgin to light the Black Flame Candle, we want to try and re-summon Salem’s Sanderson sisters with these 58 Hocus Pocus quotes!

Just A Bunch of Hocus Pocus

Directed by Disney powerhouse Kenny Ortega, Hocus Pocus met a lukewarm reception during its original 1993 release. However, many moons later, it is now one of Disney’s longest-reigning Halloween films.

What makes Hocus Pocus so magical?

Well, for many long-time fans, nothing screams wholesome fun better than talking black cats and reanimated dead. For others, it’s the lingering impression of the Sanderson sisters.

This witch trio is played by Bette Midler, Sarah Jessica Parker, and Kathy Najimy. These withces achieve what very few Halloween characters have: they’re lovable, fun, and utterly wicked. We cheer for their defeat while enjoying every second of their villainy.

And the best part? The Sandersons sisters are slated to return in the 2022 sequel!

However, until witching hour arrives, you’ll need something to dazzle thy senses. So, lucky for you, we’ve put together this list of Hocus Pocus quotes that are sure to enchant you!

(For more Disney goodness, you can also check our favorite Up quotes and High School Musical songs.)

Hocus Pocus may be a 90s movie, but its script is far from corny. Between Bette Midler’s acting chops and Jason Marsden’s endearing voice role as Binx the cat, this film is full of great one-liners.

Let’s look back on its most famous lines with these 10 Hocus Pocus quotes:

6. “Why was I cursed with such idiot sisters?” – Winifred Sanderson

7. “It doesn’t matter how young or old you are. You sold your soul! You’re the ugliest thing that ever lived, and you know it!” – Dani

10. “Couldn’t you forget about being a cool teenager just for one night?” – Dani

Winifred, Mary, and Sarah Sanderson are some of Disney’s most beloved witches. They’re devious, scheming, and repugnant—and that’s only some of the compliments we can think of!

They’re also incredibly quotable. Without the sisters’ catchy incantations, Hocus Pocus wouldn’t be the hit that it is today.

Therefore, we must present 13 magical Hocus Pocus quotes from the Sanderson’s, plus a few other characters:

11. “We must find the book, brew the potion, and suck the lives out of the children of Salem before sunrise. Otherwise, it’s curtains. We evaporate! We cease to exist! Dost thou comprehend?” – Winifred Sanderson

13. “You hags! There are not enough children in the world to make thee young and beautiful!” – Thackery Binx

14. “I suggest we form a calming circle.” – Mary Sanderson

17. “Well, it says to form a circle of salt to protect from zombies, witches, and old boyfriends.” – Allison

19. “Unfaithful lover long since dead. Deep asleep in thy wormy bed. Wiggle thy toes, open thine eyes, twist thy fingers toward the sky. Life is sweet, be not shy. On thy feet. So sayeth I!” – Winifred Sanderson

21. “Twist the bones and bend the back.” – Winifred Sanderson before turning Binx into a cat

22. “My ungodly book speaks to you. On All Hallow’s Eve, when the moon is round, a virgin will summon us from under the ground. Oh, oh! We shall be back, and the lives of all the children of Salem will be mine!” – Winifred Sanderson

Spare for some cheesy gags, Hocus Pocus holds up amongst adult fans thanks to the tongue-in-cheek humor you likely missed as a kid.

From the film’s most innocent to its more (ahem) questionable jokes, here are 15 funny Hocus Pocus quotes:

27. “I need one of those instant ice packs. You girls are giving me a fever!” – Bus Driver

28. “To convey gorgeous creatures such as yourselves to your most forbidden desires.” – Bus Driver

30. “You’re going to turn me into one of those fat, useless, contented house cats.” – Thackery Binx

31. “Thank you! I really like yours too. Of course, I couldn’t wear anything like that because I don’t have any—what do you call them, Max? Yabbos? In fact, he loves them!” Dani

34. “Maybe you could learn to breathe through your nose.”- Max

35. “Sisters, Satan has married Medusa. See the snakes in her hair.”- Mary Sanderson

37. “It is a prison for children.”- Winifred Sanderson

It’snever too early to start planning for Halloween. Whether it’s prepping costumes or making a playlist of the best Halloween songs, a rewatch of Hocus Pocus should fit into your festivities somewhere.

Here are 8 Hocus Pocus that are perfect for celebrating the greatest season of them all!

39. “Sisters, All Hallow’s Eve has become a night of frolic, where children wear costumes and run amok!”- Winifred Sanderson

41. “It’s not Dad. It’sDadcula. Oh, my goodness. Who must this charming young blood donor be?”- Dave

43. “Aren’t you broads a little old to be trick or treating?”- Master’sWife to the Sanderson Sisters

45. “It just so happens that Halloween is based on the ancient feast called All Hallow’s Eve. It’s the one night a year where the spirits of the dead can return to Earth.”- Allison

46. “But everyone here knows that Halloween was invented by the candy companies. It’s a conspiracy.”- Max

Even if you’re no longer a fan of Halloween, Hocus Pocus is a fantastic childhood movie you should consider checking out again.

Between Bette Midler’s rendition of I Put a Spell on You to Sarah’s enchantment of the town’s children and the cozy autumnal air of Salem, Hocus Pocus nails the nostalgia factor for many fans.

Thus, we’d be remiss to close out this list without including these 12 memorable Hocus Pocus quotes:

49. “I am beautiful! Boys will love me!”- Sarah Sanderson

50. “Take good care of Dani, Max. You’ll never know how precious she is until you lose her”- Thackeray Binx

57. “I killed you once. I shall kill you again, you maggoty malfeasance! Hang onto your heads!”- Winifred Sanderson

Decades on, Hocus Pocus continues to draw in new and old fans—and it’s no wonder why.

Its fantastic characters, spellbinding plotline, and quotable one-liners haven’t lost an ounce of charm. Compared to other Disney TV movies from the same decade, Hocus Pocus is singular in its enduring legacy.

How about you? What are your favorite Hocus Pocus quotes? Feel free to let us know in the comments below!