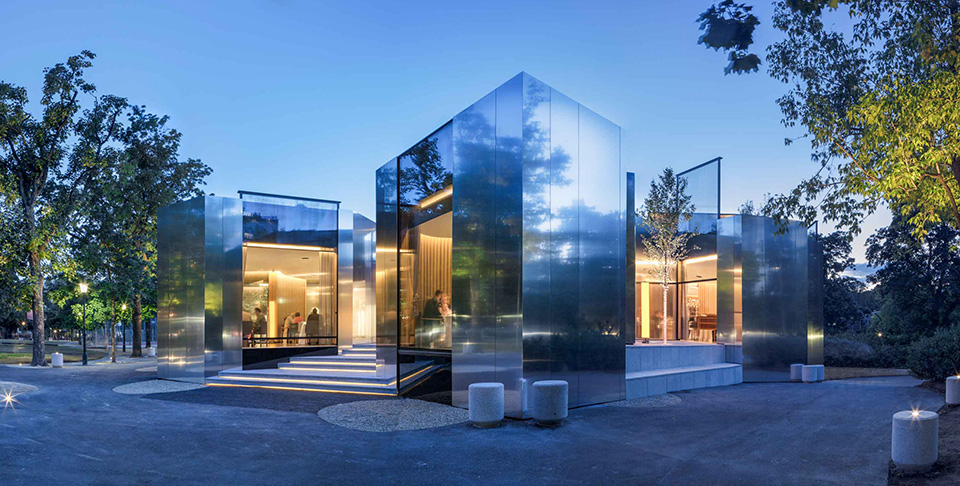 The use of mirrors is a well-known interior design technique often employed in small rooms or apartments. For cramped quarters, mirrors help provide the illusion of space. Mirrored design isn’t exclusive to indoor space, however, as new trends in mirrored architecture are bringing the reflections outside. Mirrored houses, cabins and art installations show just how other-worldly mirrors can be in architecture. It’s a fascinating trend that we at TheCoolist have followed closely.

Just how impressive can mirrored architecture be? We’ve rounded up a list of 10 of the most remarkable mirrored houses, cabins and more from around the world. It’s a blend of architecture and fantasy that is very, very real. 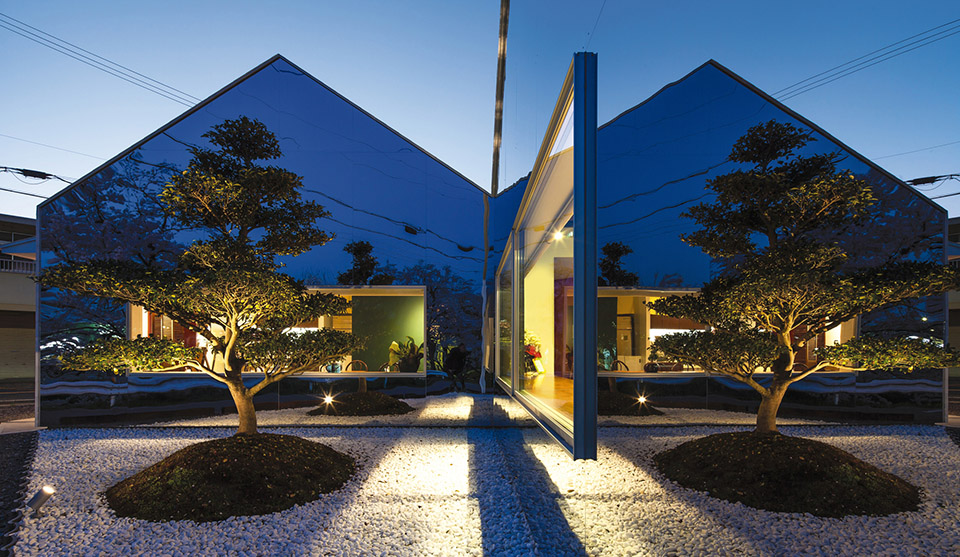 The Japanese architecture firm bandesign covered two walls of a cafe in mirrored panels from top to bottom. These mirrors reflect a row of cherry trees lining a river bank on the other side of the road. The project, called Mirrors, is located in a residential area that is frequently visited by tourists during cherry blossom season. The mirrored building is split into two wings with the reflected walls angled towards each other. A Camilla tree, standing on a white gravel patch with tiled edges, is situated in the middle of the space between the two walls. The mirrored walls reflect the Camilla tree and the cherry trees and create a fantastic view that entices the area’s visitors. 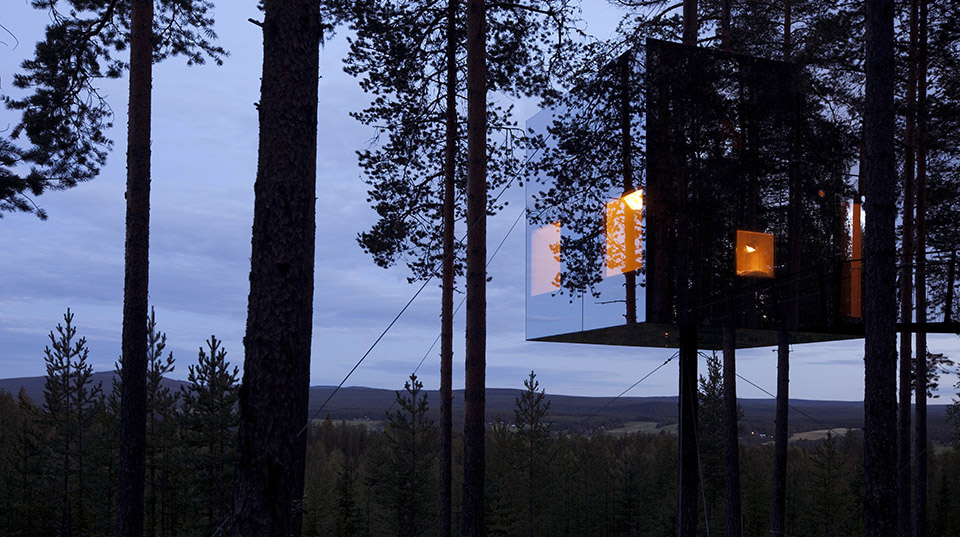 This incredible hotel in Sweden takes guests into the trees. Treehotel offers treerooms, contemporary accommodations and a one-of-a-kind experience deep in the forest. One of Treehotel’s accommodations is the Mirrorcube, a 4 x 4 x 4 meter cube with mirrored walls on the outside. The cube has an aluminum frame built around a tree, interiors made of plywood with a birch finish, and six windows with views of the surroundings. The cube is essentially a cabin for two and includes a double bed, bathroom, lounge, and a terrace on the rooftop. The mirrored walls of the cabin allow it to blend into its peaceful forest environment. 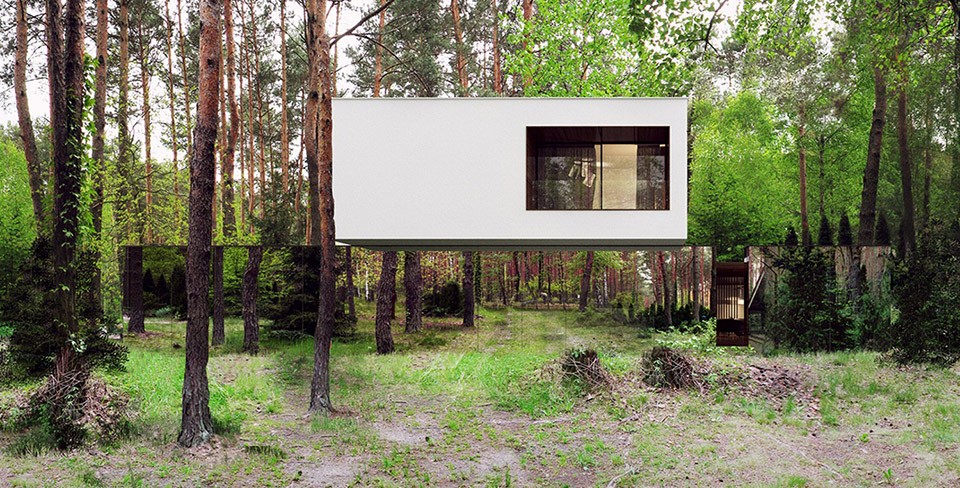 The Mirror House, a design concept by Polish firm Reform Architekt founder Marcin Tomaszewski, is a two-story house with the exterior walls of its lower floor covered in a reflective surface. The mirrored house is located in a forested area and, when viewed from one side, the mirrored lower floor makes the upper floor appear as if it is floating in the forest. With a creative use of mirrors, this design appears to come out of another world. 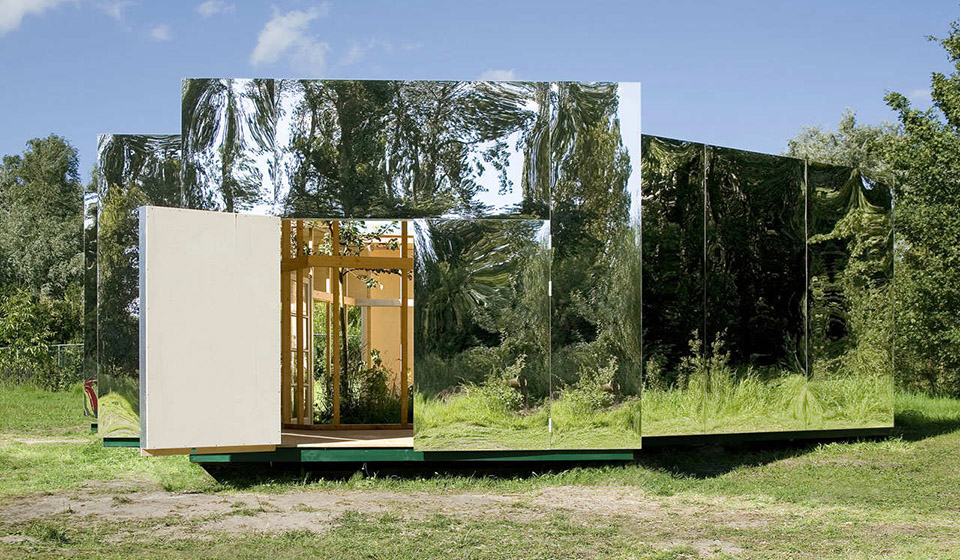 The Archive by Amsterdam-based architecture firm Bureau LADA is designed to be a functional studio for the modern artist. The exterior of the studio is covered entirely in mirrors which reflect the forest around it. On the inside, the studio has an open courtyard with a garden and a table. The courtyard is surrounded by translucent walls that allow natural light in. This mirrored artist’s studio is designed to blend in with its surroundings while giving the artist privacy and inspiration at the same time. 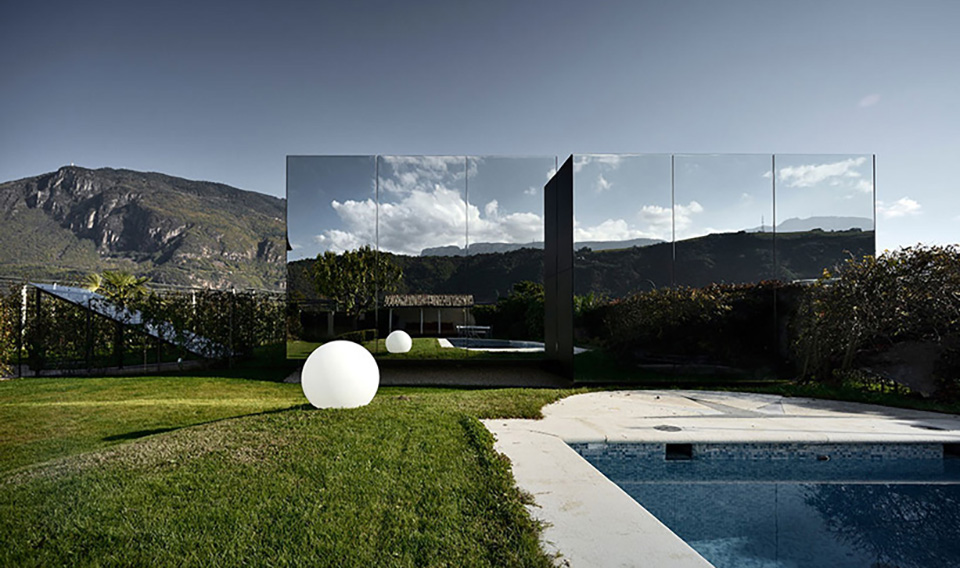 Designed as luxury holiday homes, the Mirror Houses by Peter Pichler Architecture are two structures whose west facades are clad in mirrors. The mirror architecture of the holiday dwellings reflects the stunning views of the dolomite mountains in Bolzano, Italy. The houses have separate access, gardens and balconies. Both also stand on a base slightly above the ground – giving them a “floating” appearance. 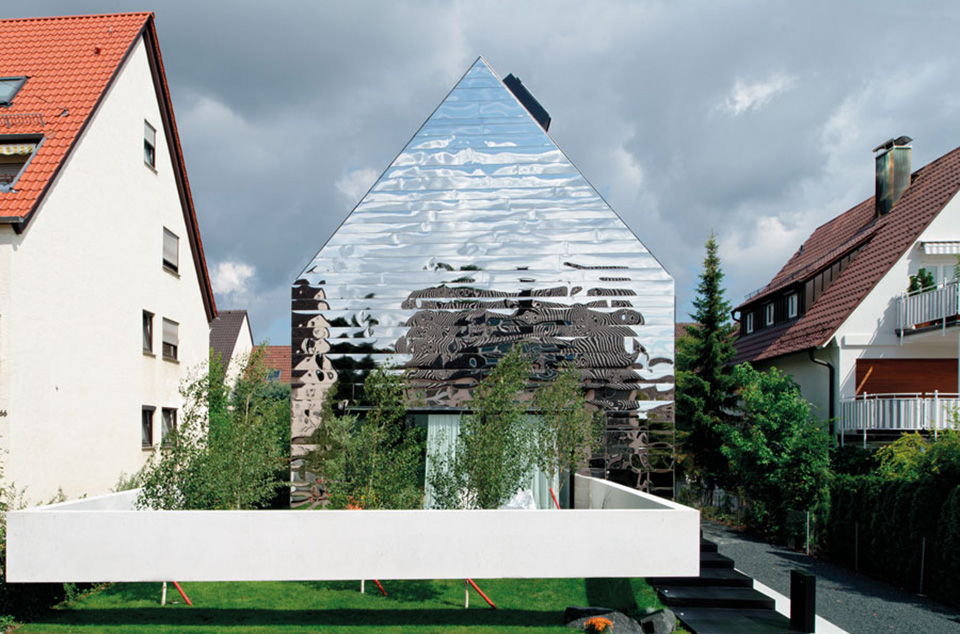 German architect Bernd Zimmermann renovated a house created in the 1950’s and covered its entire exterior with polished stainless steel, reflecting its environment. The architect could not change the proportions of the house, but the interiors were fair game and the architect completely renovated the inside to create new spaces, open plan areas and galleries. He also closed most of the windows and created new ones. According to the description of the project, the exterior mirrors allow the house to adapt to its environment without being “subordinated” by it.

Viennese architecture firm PPAG Architects won a competition to do the renovations and extension of the popular restaurant Steirereck in Vienna. The studio added four block extensions that were covered in a metal material that reflected the park area around the restaurant. The mirrored blocks create a cozy atmosphere that lets the restaurant guests feel comfortable and at the same time feel like they are connected to the outside. In addition to the reflective surface of the extension blocks, the restaurant design also incorporated large windows that provide the guests with a view of the surroundings. 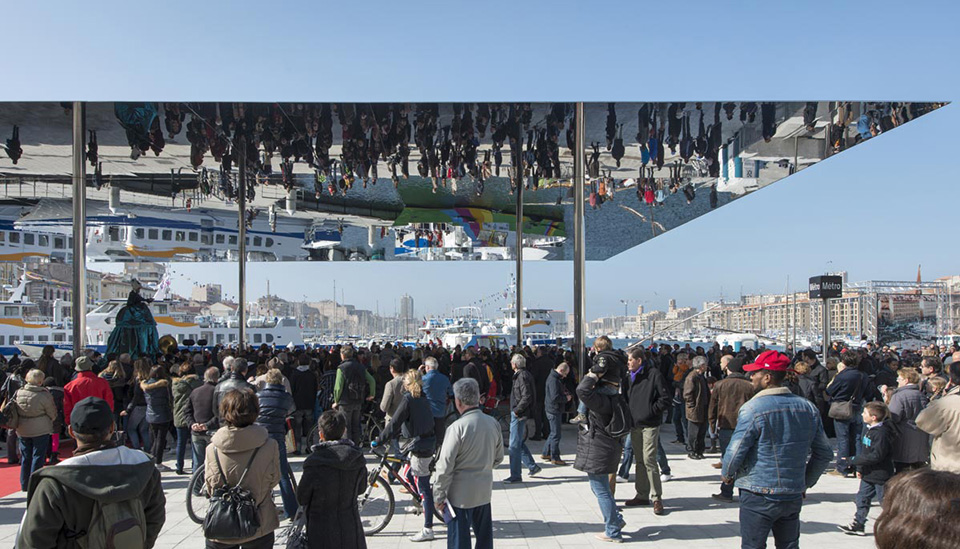 Architecture and design firm Foster + Partners worked with Michel Desvigne, Tangram Architectes and several other consultants to transform the Marseille Vieux Port into a modern public space. One of the key transformations include an events pavilion with a mirrored canopy. The canopy is open on all sides and is made of reflective stainless steel. The reflective steel surface creates an interesting visual for the pedestrians and visitors of the port. 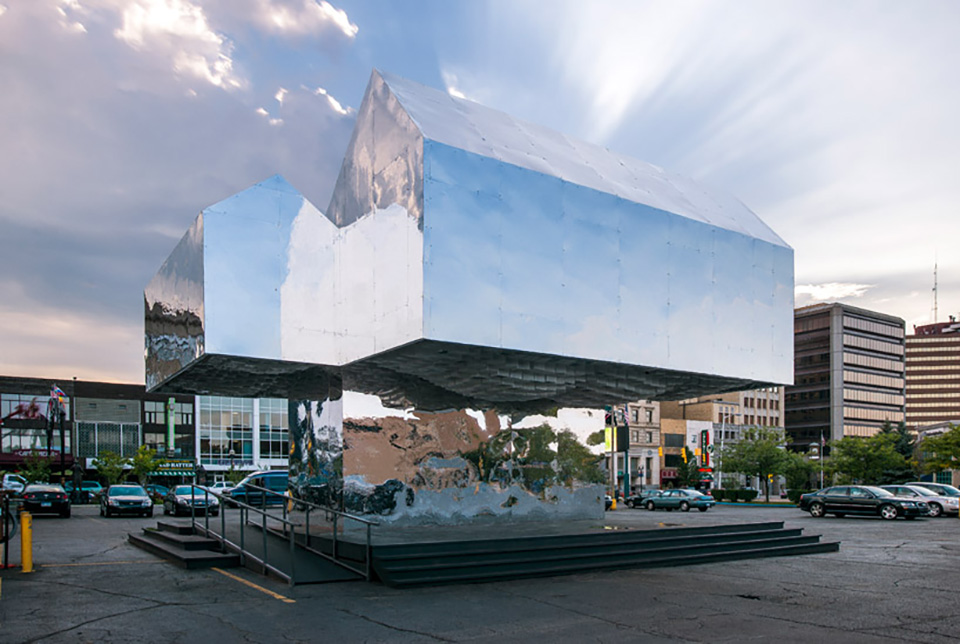 Created for an international competition judged by MOMA curator Pedro Gadanho, Mark’s House by studio Two Islands is a Tudor-style house covered in reflective panels and set on a pedestal that’s also covered in a mirrored surface. The mirrored pedestal makes the structure appear as if it is floating in the air. The mirror house is named after its imagined Flint resident, Mark Hamilton, who loses his home to foreclosure. 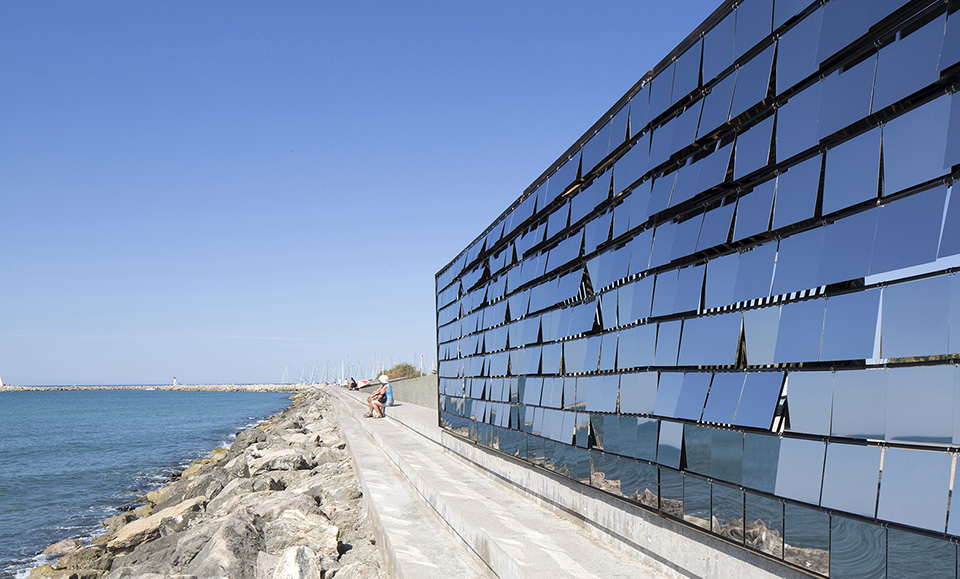 Designed by NAS Architecture as part of the French architecture festival Festival des Architecture Vives, the Breath Box is a rectangular seaside structure covered with more than 300 mirrored flaps made of polished steel. The Breath Box is designed to reflect its environment and work with the coastal winds. The mirrored flaps are attached to the structure on a hinge, allowing the coastal wind and the visitors to lift them up. Only one side is covered with these flaps so that visitors can enter the box and interact with the mirrored panels.

These ten amazing projects showcase what mirrored architecture is all about. What other projects involving mirrors should be added to this list? Share them in the comments below or send us a message on Facebook or Twitter.