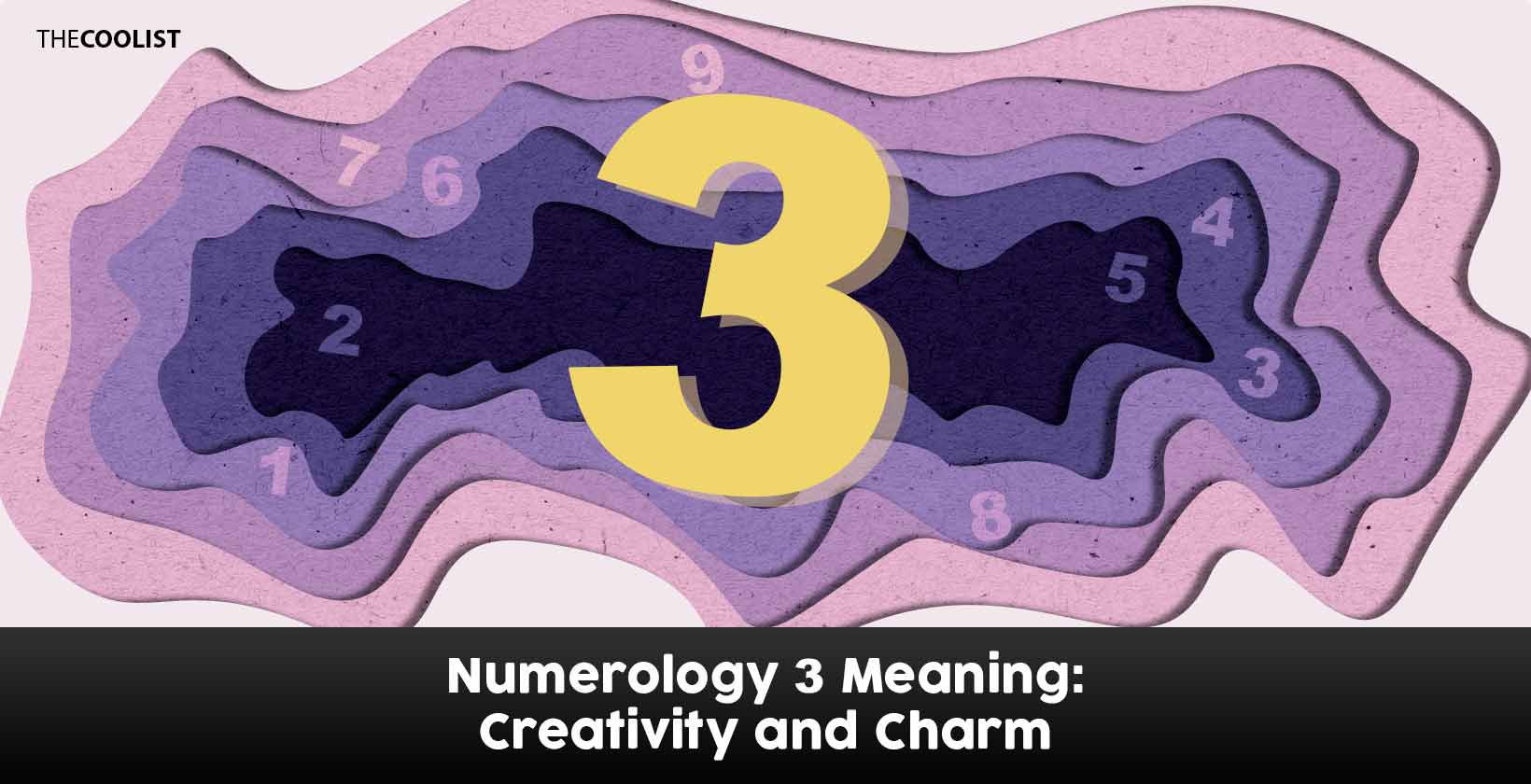 The numerology of 3 has significant meanings for creativity and passion. People who resonate with the number 3 in their lives are creative souls who find joy in artistic endeavors.

Numerology examines nine single-digit numbers, including the number 3, and the three master numbers, 11, 22, and 33. The practices of numerology hold that each number harbors the hidden meaning of the world. Numerological symbols like the number 3 are capable of guiding you through life as these numbers highlight your strengths, weaknesses, and other qualities.

What does the number 3 symbolize?

The first concept the number 3 symbolizes is the Holy Trinity. The Holy Trinity is one of the most well-known symbols of the number 3, as it represents the unity of the Father, the Son, and the Holy Spirit as one singular Godhead. The Trinity in Christianity is one of the central affirmations about God because Christians believe that God is one figure represented in three persons.

Omnipotence, omniscience, and omnipresence of God

The second concept the number 3 symbolizes is the omnipotence, omniscience, and omnipresence of God. We see the 3 symbolism with God, religious bodies regarding him as an all-powerful, all-knowing being. Omnipotence means that God is always in control, while omniscience means God’s ideas are always true and omnipresence signifies God is present everywhere.

The third concept the number 3 symbolizes is birth, life, and death. The symbolism refers to the three stages of existence all life embodies. The number 3 is heavily associated with the life stages because the stages hold great significance to a person’s existence, regardless of their background or characteristics.

Past, present, and future

The fourth and final concept the number 3 symbolizes is our past, present, and future. The 3 symbolism of time is similarly significant to 3’s association with the life stages. The past, present, and future all hold great importance to every individual. By representing the three specific moments of time, the numerology of 3 emphasizes the importance of our history, current path, and unfolding destinies.

What is the meaning of the number 3 in numerology?

The number 3 in numerology means creativity, self-reliance, and positivity. The number 3 is a sign of optimism and inspiration, and people who resonate with this number regularly express themselves creatively and radiate confidence in everything they do. As a result, numerology 3 carries potent motivational vibrations, spurring born creators and innovators onto a powerful life path.

Is the number 3 a master number?

What does a number 3 house in numerology mean?

A number 3 house in numerology signifies a creative space that encourages passion, optimism, and fun-loving energy. People who live in a number 3 house gravitate towards careers in the creative field, from painters and writers to those with professions in marketing and graphic design. The optimistic and passionate energy of number 3 also makes for a warm and happy home.

What is year 3 in numerology?

A year 3 in numerology refers to a fun and creative personal year. A personal year is a number in numerology we calculate by adding your date of birth (day, month, and year) and the current year. During a personal year 3, self-improvement and creativity will take center stage as you work on expressing your emotions, finding joy in activities, and moving forward with your talents in the creative field. A personal year 3 will give you the confidence to put yourself out there and tune into your inner creative side even if you don’t consider yourself a creative person. It’s important to remember that creativity doesn’t just refer to painting, writing, and drawing. Gardening, cooking, and even creative problem-solving are just a selection of different ways that you can bring some creativity into your life.

What does the number 3 mean spiritually?

Is the number 3 powerful?

Yes, the number 3 is powerful because of its broad cultural and religious significance. For example, the number 3 in the Christian faith represents the Holy Trinity of the Son, the Father, and the Holy Spirit as one singular Godhead. The Buddhist faith sees the number 3 as the triple gem or jewels, which is a powerful combination of the Buddha, the Dharma, and the Sangha. Meanwhile, the Ancient Greek Pythagoras and his followers believed that each number had a deeply significant meaning, with 3 being the most perfect as it represents the beginning, middle, and end.

What is the energy of the number 3?

Yes, 3 is a good number because it represents harmony, luck, and stability. Different cultures throughout the world see the number 3 as a lucky number because it represents the past, present, and future and the cycle of birth, life, and death. To add, people with the number 3 are generally very ambitious, appreciated, and successful, using their power to influence and help those around them.

Is 3 a lucky number?

Yes, 3 is a lucky number, especially in Asian countries like China and Japan. China sees the number 3 as a symbol of good luck because its pronunciation in Mandarin (sān) sounds similar to the word birth (dàn). Meanwhile, Japanese culture believes that the number 3 is lucky because it represents the past, present, and future, as well as the mind, body, and spirit.

What is the Biblical meaning of the number 3?

What does 3 mean in astrology?

Does the number 3 mean anything in Indian numerology?

Yes, the number 3 holds tremendous meaning in Indian numerology, due to its ruling planet of Jupiter. According to Vedic Astrology, Jupiter governs finance, and so the number 3 has a strong association with wealth building and personal stability. Jupiter’s expansive influence translates to social matters. As a result, Indian numerology says people with the number 3 tend to have larger-than-life personalities, big ideas, and dominant creative energies.

What does 3 mean in Chinese numerology?

The number 3 in Chinese numerology means to live, making it a good number in the eyes of the Chinese. Traditional Chinese beliefs are highly superstitious as some individuals go to extreme lengths to avoid certain numbers, like the number 4, because its pronunciation is similar to the word for death. In contrast, the number 3 is similar sounding to the word for birth, life, or live. Chinese culture consequently believes number 3 is a lucky number, attributing it to three important stages of life — birth, marriage, and death. Moreover, the repetition of the number 3 becomes more auspicious, such as with the number 333.

What does the number 3 represent in Feng Shui?

The number 3 in Feng Shui represents creation and birth. Feng Shui is an ancient Chinese traditional practice of arranging buildings, furniture, and objects to create harmony, balance, and peace in an environment. For example, Feng Shui consultants will use 3 vases to bring good luck to a home as 3 is a lucky number in Feng Shui.

What does the number 3 mean in Japanese numerology?

The number 3 in Japanese numerology means luck because it represents creation. Japanese culture sees numbers as lucky and unlucky which is similar to Chinese culture. In the case of number 3, Japanese traditions believe that the number 3 brings good luck because of its links to birth, the past, present, and future, as well as the mind, body, and spirit.

What are the most compatible numbers with 3 in numerology?

The compatibility of 8 and 3 in numerology is difficult due to their contrasting energies. The number 8’s energy radiates power and authority, while 3’s energy is creative and optimistic. Opposites attract, so 8 and 3 sometimes have strong, respectful, and promising relationships.

8s are goal-oriented, whereas 3s take a more relaxed approach toward life. A difference in outlooks is what causes 8s and 3s issues because 8 quickly becomes annoyed with 3’s almost unmotivated mindset towards serious tasks. Meanwhile, 3s sometimes find 8s to be demanding and uptight. However, this isn’t to say that 8s and 3s should avoid each other at all costs. 8s and 3s can learn to live with each other’s contrasting views and energies if mutual respect and effort are brought into the relationship.

The compatibility of 9 and 3 in numerology is very strong. 9s and 3s are a match made in heaven because of their shared characteristics of compassion, optimism, and generosity. Both parties have energetic personalities, which in some instances causes problems, but once 9s and 3s learn to share the spotlight, they will restore harmony throughout their relationship.

The compatibility of 3 and 5 tends to be harmonious. 3 and 5 make an excellent match because the two share an optimistic outlook on life. Furthermore, both enjoy social outings, especially with their respective partner in tow. Money is sometimes an issue for 3s and 5s because they’re both so relaxed that they’re sometimes negligent with monetary affairs. However, 3s and 5s will live in perfect harmony as long as the responsibilities are split.

The compatibility of 3s and 6s is strong as both have positive outlooks on life. 3s and 6s similarly exhibit attractive personalities as they’re both extremely social, meaning they love the company of others. Although the pair have many similarities, they’re also very different, bringing their strengths to the relationship. 6s are nurturing people who will be completely devoted to the 3, whereas 3s will bring a generous and playful side that keeps 6 on their toes.

The number 3 in numerology is creative and joyous, setting people with the number up for great success in creative fields. The number’s significance in different cultures and religions also makes 3 a prominent number in numerology. From the Christian faith’s Holy Trinity to the three life stages, 3 is an important and fascinating number that crosses cultural barriers.

We’d love to know what you think about the number 3 in numerology. Comment down below with your thoughts and opinions.