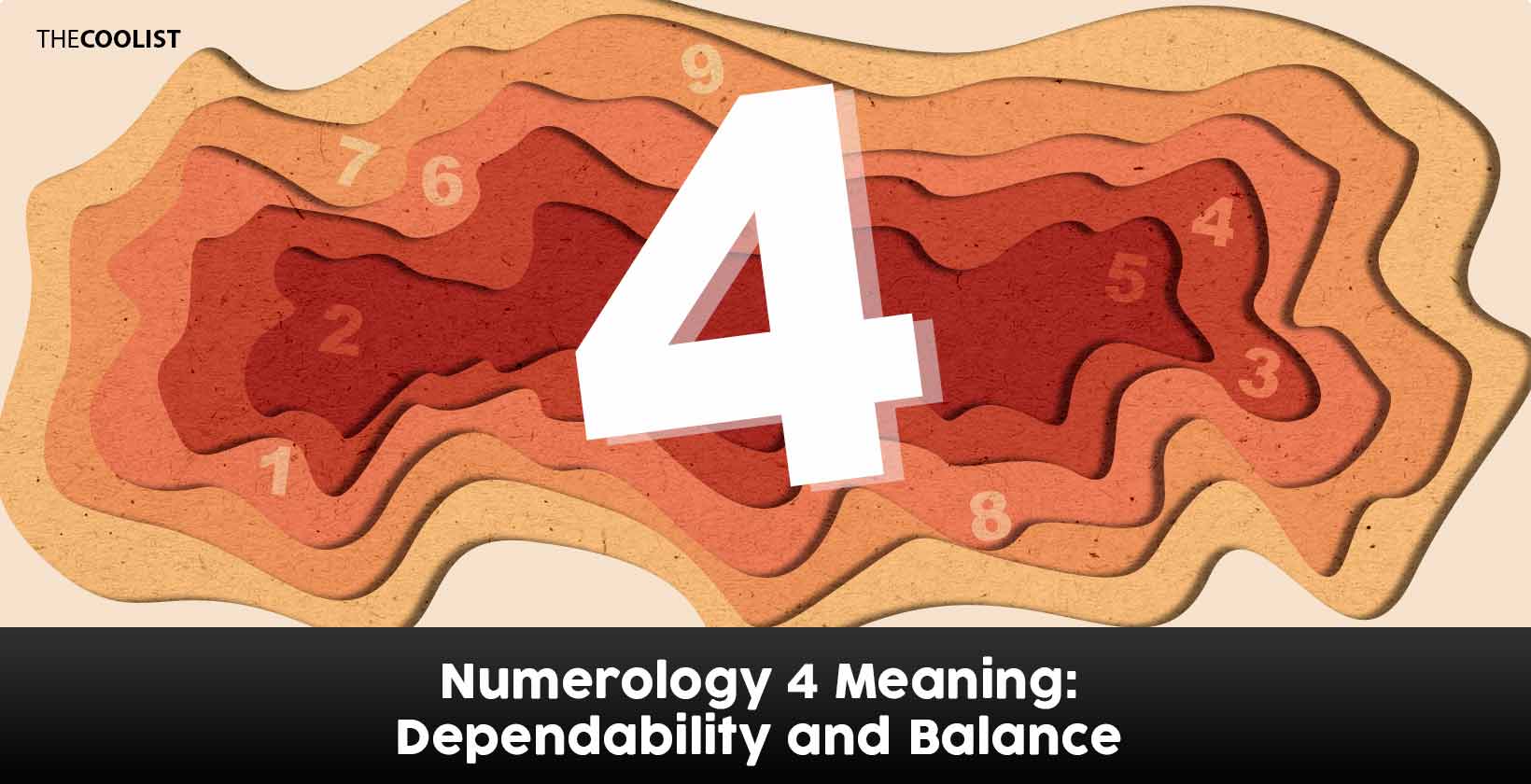 Stability, reliability, authority, and dedication characterize numerology 4. Counterintuitively, numerology 4 also carries with it connotations of dissatisfaction with an unsustainable status quo. People with the number 4 in their lives have the drive to build something solid, durable, and meaningful (even if it means radically upending existing modes of thinking and doing). Many cultures around the world view the challenging aspects of 4 as an unlucky omen, but ultimately the number 4 is a profound teacher.

The system of numerology places special significance on nine numbers, including 4, as well as the three master numbers. The vibration of the number 4 can be taken on its own merits or analyzed through numerology’s five core numbers. The number 4 holds spiritual significance in other systems as well, such as Vedic astrology, Feng Shui, and even Christianity, which is generally rooted in natural laws and fundamental truths.

Below, we take a close look at the meaning of the number 4 in numerology. By aligning your intent with 4’s potent spiritual energies, hidden truths are revealed along the path to self-discovery.

What does the number 4 mean in numerology?

In numerology, the number 4 means stolid reliability, dedication to a higher cause, and disciplined authority. The number 4 is a sign of strength and efficiency as it has a focused and committed approach toward life and work. Numerology 4 signifies grit in the face of adversity.

Throughout numerology, 4 offers a great amount of stability and sticks to what it already knows instead of branching out and trying something new. The wise energy that comes with the number 4 means it only sees things in black and white and believes that there is a strict definition between right and wrong.

All in all, the number 4 has profound mental strength and often leads with its head instead of its heart.

What does year 4 in numerology mean?

In numerology, a 4 year means portends vision, restriction, effort, determination, and breakthroughs. Your year will bring you clarity that now is the time to highlight new priorities and work towards long-term goals that could alter your life for the better. 4, after all, is the number of organization and work, meaning you, throughout the year, will develop a clear vision of what you want for your life and career.

Personal year 4 is all about putting things in action and making your dreams a reality. It is the best year to achieve all the goals you have set for yourself and deal with any potential challenges or obstacles that present themselves to you.

Why is the number 4 special?

Is 4 a master number?

Although 4 is not a master number, it does link to master number 22 (since 2+2=4). People with a 22/4 master number will feel a powerful imposition of emotional sensitivity from their twin 2s over their fundamental drive towards routine and stability from the number 4. This opposition often creates conflict. But if 22/4 people achieve balance, they become profound life teachers, channeling the stability of 4 through the doubled-up diplomacy of 2.

What does the number 4 mean spiritually?

Spiritually, the number 4 means that you need to take the time to meditate, pray, and bring yourself closer to the divine realm. The number 4 is a sign of balance and stability. Take it as a reminder that to feel completely at peace, you need to trust yourself and strengthen your connection to the spiritual realm.

Is 4 a powerful number?

Many people agree that 4 is a powerful number in numerology because the number 4 has ties to leadership, stability, and power. People with number 4 personalities are confident individuals who truly are a force to be reckoned with as they are consistent, disciplined, and secure.

Is 4 the strongest number in numerology?

The number 4 is not the strongest number in numerology, because double-digit master numbers hold the most power. However, 4 is one of the strongest single-digit numbers in numerology due to its square, solid nature. Additionally, 4 is a reduction of master number 22, and people with 22/4 have the greatest ability to build and teach of all.

What energy does the number 4 bring?

The number 4 brings the energy of stability and balance. There are many reasons why numerology 4 has such a solid connotation. For example, the number 4 represents the four elements in balance: earth, fire, wind, and water. In nature, the number 4 relates to the four phases of the moon as well as the four seasons. Pythagorus’s followers believed 4 to have special significance as the final digit of the tetractys, a series of numbers that adds up to the most divine number 10 (1+2+3+4=10). Geometrically, a shape with four equal sides has equal bearing in all cardinal directions. In all cases, 4’s energy represents forces in balanced opposition.

Is 4 a karmic number?

4 is a karmic number, and people with this specific karmic number should establish a more disciplined approach toward life. Karmic numbers present themselves to people who need to rectify mistakes that they have made throughout their lifetimes as a way to help them gain clarity on where they went wrong.

4 is a good number in numerology as are all numbers, but it isn’t always easy. For example, a musical composition must first go through a turbulent development section before reaching a stable conclusion. The number 4 brings with it a similar journey before reaching equilibrium. For this reason, some cultures such as China and Japan consider 4 to be unlucky. Challenge is an opportunity for improvement, so let the number 4 guide you as a teacher, and good things will come.

What does 4 symbolize in Chinese?

In Chinese, the number 4 symbolizes death. For the most part, Chinese people see the number 4 as a very bad number as its pronunciation, “Si” in Chinese, is the same as death. Similar to how western countries view the number 13 in a negative way, Chinese hotels, buildings, and housing blocks will often skip floors 4, 14, and 24 as they believe it will bring bad luck to those who enter.

What does the number 4 mean in Feng Shui?

What does the number 4 mean in Japanese?

In Japanese, the number 4 means bad luck. The reason is similar as in Chinese, since the Japanese word for 4 (“shi”) sounds like the word for death. In order to ward off the bad energy of 4’s death connotation, Japanese hotels, hospitals, and apartment blocks will refrain from using the number 4 for levels or rooms. Additionally, maternity wards in Japan will also avoid the number 43 as its meaning is “stillbirth.” Further still, Japanese culture shuns the number 444 as well as the number 4444 because of the negative energy.

What does the number 4 mean in Indian numerology?

In Indian numerology, the number 4 means constructive radicalism. Although a birth number 4 has the natural urge to build, it is not content to build on what it sees as broken foundations. Thus, Indian numerology 4 has a powerful energetic push to start tabula rasa, free from the constraints of outdated mindsets and practices.

Does the number 4 mean anything in astrology?

Uranus and the moon’s north node Rahu rule over the number 4 in astrology. People use astrology as a way to predict future events by the planet’s and stars’ configurations. For Leo and Scorpio zodiacs, the number 4 is a lucky number that connects itself to power, discipline, and consistency. The fourth house in astrology is the house of home and family. When planets move across the fourth house, they encourage us to uncover what makes us feel at home and create safe spaces where love and care flourish.

What planet rules the number 4?

The planet Uranus rules the number 4 in astrology. Before the discovery of Uranus and Neptune, however, astrologers associated 4 and 7 with the north and south ends of the moon, respectively. In India, Vedic astrologers similarly assigned 4 to Rahu, the moon’s north side.

Is 4 a lucky number?

No, 4 is not a lucky number, especially in some Asian countries. Countries like Japan and China, for example, see the number 4 as incredibly unlucky because the pronunciation of the number sounds like “death”. People even have fears of the number four which is called tetraphobia.

What does a 4 house number mean in numerology?

In numerology, a number 4 house address is indeed auspicious. The number 4’s solid, stable characteristics are ideal both for the physical and spiritual aspect of a home. In its most basic form, a building will have four major walls on a square foundation. The number 4 reflects this architectural reality, and lends the energy of endurance to any home which bears this number in its address. Moreover, the number 4 house address portends a harmonious, prosperous household in which its inhabitants may grow and thrive.

What color is 4 associated with?

Is the number 4 male or female?

The number 4 is female. People see even numbers, like the number 4, as feminine, and odd numbers, such as 1, 3, 5, 7, and 9, as masculine. 4’s feminine association dovetails with its dedicated, reliable numerological meaning. Female 4 brings a highly receptive, anchoring wisdom to the fold, balancing out more reactive spiritual elements and allowing their best characteristics to thrive.

What does the number 4 symbolize in the bible?

The number 4 in the Bible symbolizes the creation of the material universe. On the fourth day of creation, God completed the material universe, bringing into existence the Sun, the moon, and all of the stars. The purpose of the Sun, moon, and stars was to give off light, divide the day from the night, and signal the days, years, and seasons, of which there are 4.

What numbers are the most compatible with 4 in numerology?

In numerology, the numbers 2, 6, and 8 are the most compatible with 4. However, there are additional pairings of 5 and 9, which we discuss below.

2 and 4 compatibility in numerology

2 and 4 are compatible in numerology because 4s are practical personalities that see the world through a realistic lens. Number 2s, on the other hand, can open their eyes and show 4 situations from a different perspective.

Number 2s are supportive in relationships and can offer a level of guidance that many other numbers can. When you combine a 4 with a 2, the 4 will help ground the 2, which is often on an impractical path, and put them on the right track to better their future.

6 and 4 compatibility in numerology

6 and 4s share the same loyal, reliable, and dependable personalities as one another. The dependable nature of 6 and 4 creates a highly compatible couple with the potential for a long-lasting relationship. A 6 in numerology will work well with a 4 as the 6 will bring with them a nurturing and caring side that will help 4 connect on a deeper level and reassure them that they’re loved and supported.

8 and 4 compatibility in numerology

8s and 4s are both ambitious and desire to work hard. Their drive and work ethic are two qualities that bring them together as a solid and promising match. Both 8 and 4 will support each other’s goals and make the other feel secure and happy throughout the entire relationship.

5 and 4 compatibility in numerology

The numbers 5 and 4 are a difficult match in numerology as 4s strive for stability, and 5s are always seeking change. With two very different energies, 5 and 4 will want to pull in different directions, which could ultimately cause tension or cause the other to step out of their shell and see life from a different perspective.

9 and 4 compatibility in numerology

4 and 9 in numerology are an unusual match in numerology. Number 4s need stability while number 9s enjoy spontaneity. However, their shared desire for committed relationships and respect brings these two numbers together in harmony.

The number 4 in numerology is reliable, stable, dedicated, and determined. People who have the number 4 have their goals set in stone and are willing to do whatever it takes to get there. While numerology 4 often signifies challenge and dissatisfaction with outdated tradition, the end result always points towards a natural harmony.

We’d love to know what you think about the number 4 in numerology. Comment your thoughts and opinions in the comment section down below!