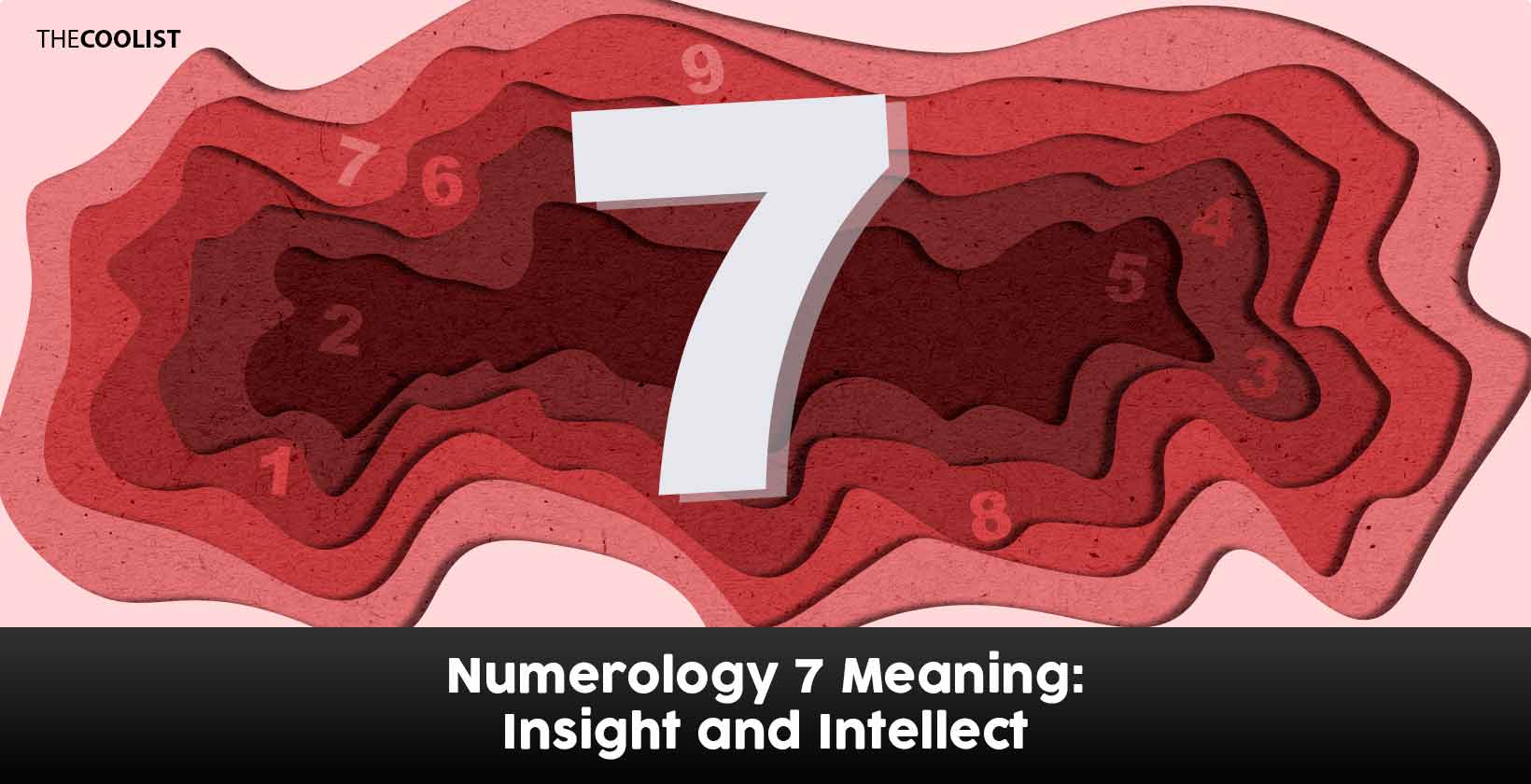 Numerology 7 is spiritual, intellectual, and determined. People with the number 7 in their lives are in tune with their spiritual side and stop at nothing to uncover the hidden meanings behind the world and the universe around them. The number 7 carries different meanings throughout many cultures and is seen as both a lucky and unlucky number.

What does the number 7 mean in numerology?

In numerology, the number 7 means logic, understanding, spirituality, and intellect. People with the number 7 are searchers for a deeper meaning, and they won’t stop chasing this meaning until they uncover the truth. 7s simply want to understand how the world works, and their intellectual and understanding minds give them all they need to focus on their exploration of life and everything around them.

Numbers 7s are extremely spiritual and find themselves in touch with their own psychic energy more than any other number. The number 7s spiritual approach to life, however, is met with intellect, and 7s will do everything in their power to find the answers to some of the most abstract questions of the world.

Why is the number 7 special?

The number 7 is special because of four main reasons. Firstly, the number 7 represents the seven heavens. The seven heavens are the seven individual levels of heaven that correspond with the seven classical planets. Secondly, the number 7 is special because there are 7 notes in a scale. The 7th scale degree is called either the subtonic or leading tone. Thirdly, there are 7 prime colors in Isaac Newton’s color sequence, red, orange, yellow, green, blue, indigo, and violet. Newton believed that the number seven was the epitome of completeness therefore, he thought that there must be seven colors in light and seven colors in the rainbow. Fourthly, the number seven is special throughout many religions and cultures. For example, in Islam, babies are named on the 7th day following the birth of a child. Additionally, in Christianity, God creates the world in 7 days.

Is 7 a master number?

What is the spiritual meaning of the number 7?

Spiritually, the number 7 means that although 7s are very much in tune with the spiritual realm, they’ll face some setbacks on their quest for a spiritual enlightenment. The number 7 is an encouragement that you need to dig deeper with your knowledge, manifest your ideal spiritual connection, and better understand the divine realm in order to acknowledge and accept your true self.

What energy does the number 7 have?

Is the number 7 good luck?

Is 7 a powerful number in numerology?

Yes, 7 is a powerful number in numerology as it represents the need to find a connection with the spiritual realm. People who harness the number 7 are highly intellectual and see the world from an entirely different perspective. 7s are logical thinkers who will analyze all situations, seek out the hidden truths, and try to understand the world on a deeper level.

Is the number 7 male or female?

What does year 7 mean in numerology?

Year 7 in numerology means learning, privacy, truth, and reflection. The 7 year means it is time to seek answers to life’s questions and learn what you want for your future. Year 7 emphasizes a slow-pace, quiet, and introverted life. Although you’ll be taking a more laid-back approach throughout this year, your 7 year is a year of great transformation due to the emphasis on learning, reflection, and truth. One example of a year 7 in numerology is the year 2023 because 2 + 2 + 0 + 3 = 7.

What does 7 mean in Chinese numerology?

In Chinese numerology, 7 means good luck or bad luck, depending on the context. For example, some Chinese people believe that the number 7 is unlucky because of the ghost festival occurring on the 15th day of the 7th Chinese month. However, the number 7 has a multitude of other meanings in Chinese numerology that are either neutral or auspicious. For example, the number 7 represents the yin and yang combining with the five elements of metal, water, earth, fire, and wood. Additionally, 7 is associated with the Seven Sages of the Bamboo Grove, a group of artists and scholars that have greatly influenced Chinese art.

What does 7 mean in feng shui?

The number 7 means creativity, completion, and the Western region of the home in feng shui. 7 is linked to the metal element, and feng shui consultants suggest that you place a metal item on the western side of your home to encourage creativity. Additionally, the Western direction is called Dui in feng shui and means completion.

What does 7 mean in Indian numerology?

What color is the number 7?

The number 7 corresponds to two colors. Firstly, the number 7 is associated with the color violet. Violet is the 7th color of the rainbow. Secondly, the number 7 is the color blue according to the hexadecimal color code. The hexadecimal color code consists of a # and six numbers. The first two numbers of the code represent red, the second two are green, and the last two are blue. In number 7’s case, the code would be #000007, which means the code contains only blue color.

What does a 7 house number mean in numerology?

A 7 house number in numerology symbolizes a calming atmosphere and a zen-like spiritual energy. A number 7 house is the ideal home for relaxing and tuning into your spirituality on a deeper level. Although a 7 house number can be calming, 7 houses can be incredibly transformative and the process of transformation can be difficult for some. However, the transformative power of the number 7 in numerology can serve to strengthen your spirituality. People that would be happy living in a number 7 house are those in retirement, creatives, and people in recovery.

What does the number 7 mean in astrology?

What is the biblical meaning of 7?

There are four prominent biblical meanings of the number 7. Firstly, the number 7 represents the power of God. In the Bible, it took God 6 days to create the universe and mankind, then on the 7th day he rested. Genesis 2:3 states, “Then God blessed the seventh day and made it holy, because on it He had rested from all His work which He had created and made.” Secondly, the number 7 signifies the Seven Churches of Revelation. The seven churches are Epehsus, Smyrna, Pergamum, Thyatira, Sardis, Philadelphia, and Laodicea. Thirdly, Jesus spoke seven statements from the cross. The Seven Last Words from the Cross are compiled from the four gospels of Matthew, Mark, Luke, and John. Fourthly, Christ has 7 stars in his right hand as he appears to John as told in Revelation. Revelation 1:16 states, “In his right hand he held seven stars, and coming out of his mouth was a sharp, double-edged sword. His face was like the sun shining in all its brilliance.”

What numbers are most compatible with the number 7?

The numbers that are most compatible with the number 7 are 1, 2, 5, and 9. Numbers 7, 2, and 5 all possess the qualities of acceptance and respect. However, the numbers 1 are compatible with 7s because they help each other grow, while 7s and 9s share optimism and compassion.

7s and 2s are highly compatible with one another as they’re both accepting, compassionate, and want a long-lasting and meaningful relationship. Number 7s will thrive on the support, love, and devotion that number 2s give them, while number 2s will be happy in the romantic bubble that number 7 provides.

One of the only issues 7s and 2s will face is the fact that both are incredibly stubborn. Once 7 and 2s tone down the stubbornness and focus on their relationship, they will collectively work on fixing their issues and resolving conflicts as a team.

The compatibility of 7s and 9s is neutral as both are optimistic, sociable, and forgiving. However, their optimistic outlook means that neither party try to work through the negatives of the relationship. For the most part, there will be very minimal disputes between a 7 and a 9, but when tensions rise, they should try to overcome them together and not just sweep the issues under the rug.

7s and 1s are complementary to one another as they both have traits that can help the other grow and develop as a person. For example, 1s maintain high standards, good work ethics, and have impeccable attention to detail in everything they do. However, 7s are optimistic, adventurous, and willing to try new things. 7s ultimately bring spontaneity to the relationship, and 1s help 7s stay on track and strive for their goals and future plans.

A 1 and a 7 have very different personalities and can cause conflict as in times of stress. The 1 will see the 7 as undisciplined and uncaring, whereas 7 will see 1 as overbearing, bossy, and judgemental.

The numbers 7 and 5are an excellent combination that can form long-lasting relationships filled with great promise and respect. 5s have a more relaxed outlook on life, whereas 7s search for a deeper knowledge and understanding. Although these very different views on the world may not seem like a good match, both the 7 and the 5 give each other the space they need to practice their views individually. When a 7 and a 5 come together, they share a powerful, respectful, and enjoyable relationship, one where they try to build each other up instead of tear each other down.

Numerology 7 symbolizes a deep spiritual connection and self-actualization. People with the number 7 will find themselves searching for answers in order to understand the world around them on a far deeper level. The number 7 holds power as both an auspicious and troublesome sign. Nevertheless, 7 remains an important number throughout different cultures and religions.

We would love to know what you think about the number 7 in numerology. Comment your thoughts and opinions down below!