Master Number 22: Numerology of “The Master Builder” and Meaning 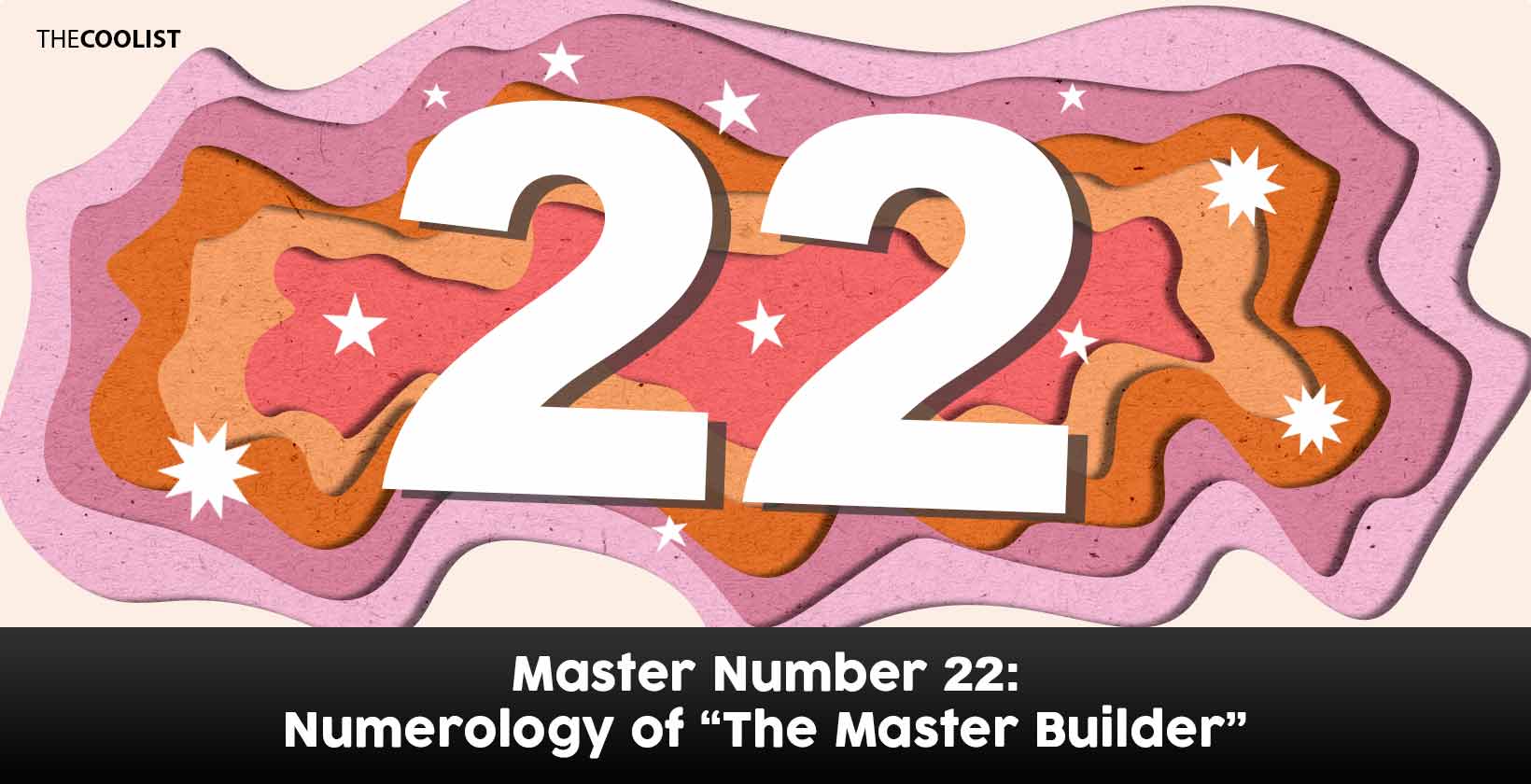 Yes, 22 is a master number. In numerology, master numbers are three double-digit numbers that carry more vibrational energy and potential than other numbers. Master number 22 lies at the center of the three master numbers, between 11 and 33.

What does the number 22 mean in numerology?

The number 22 in numerology means the following three things.

We discuss these three numerological meanings of number 22 below.

Twice the vibrations of the number 2

Master number 22 in numerology means that there are twice the vibrations of the number 2. In numerology, the number 2 is the smallest even number that vibrates with a powerful harmonizing energy that provides harmony, peace, and quiet that brings people together. The number 2 has the strongest intuition, a trait that gives it tremendous power in unifying people.

In the case of numerology 22, the traits associated with the single-digit 2 are twice as prominent. In short, master number 22 vibrates with twice as much harmony, intuition, and service to others.

The number 22 reflects the number 4, but adds complexity. Master numbers like 22 don’t need to be reduced to a single-digit number to realize their powerful qualities. However, number 22 still carries the characteristics of its root number 4. And in numerology, 4 is a no-nonsense number that uses practicality, organization, order, and determination in its approach to life and work. Furthermore, 4 is considered a stable number representing the four necessary elements in life—fire, water, earth, and air. 22 filters the stolid characteristics of number 4 through the intuitive energy of the number 2 twice over, offering a preternatural disposition towards lasting achievement.

Double the potential of master number 11

Yes, 22 is a good number. Like other master numbers, 22 is a powerful number for those who want to create or build something great in life. Master number 22 can transform even the wildest dreams into solid accomplishments.

Yes, 22 is a lucky number because it has the ability to achieve truly great things. It can envision a grand idea and then materialize it in the real world. That said, it doesn’t mean that number 22 gets everything without anything. Number 22 is not a magician but more of a visualizer and an actualizer.

Master number 22 is lucky because it’s blessed with uncompromising zeal and energy to pursue its ambitions and dreams. Its luck stems from 22’s confidence, hard work, focus, and intent on building things of great meaning and value.

What does seeing 22 mean?

Seeing the number 22 means the four things below.

Yes, seeing the master number 22 is rare. 22 is considered the most powerful number in numerology mainly because of its rareness and manifestation power. So, when you see master number 22, consider yourself lucky. Seeing the double master number 2222 is an even more powerful occurrence. Take seeing this potent number as a sign to pay attention to something of great potential happening in your life.

What is the spiritual meaning of 22?

There are two spiritual meanings of 22. First, the number 22 means working on enriching your spiritual life. The number 22 is a subtle yet powerful influence letting you know to wake up about something in your life. It asks you to look for inspiration and ideas that help improve your spirituality and fulfill your soul purpose. Second, number 22 reminds you that you have a higher spiritual purpose in this world. Numerology 22 appears when you’re asked to accept your highest spiritual power. It’s important to embrace your spiritual power and not become afraid of it, but instead, use it to serve those around you to help better humanity.

Is there a meaning for 22 in Chinese numerology?

Is there a meaning for 22 in Indian numerology?

Yes, there’s a meaning for the number 22 in Indian numerology, which relates to the number’s ruling planets. First, the number 22 represents the planet Uranus according to Vedic numerology. Uranus rules the number 4, which is the root number of 22. In Vedic astrology, the planet Uranus is known as the “Awakener.” The Uranian influence of the number 22 is associated with progressiveness and enlightenment at its best and irresponsibility at its worst. Second, 22 is co-ruled by the moon, which is influenced by the numbers 2 and 11. The Lunar influence of the number 22 relates to the mind, moods, emotions, and contentment in life. People associated with the moon influence are intuitive, patient, supportive, empathetic, gentle, and someone who brings peace and balance to whatever relationship and connection they have.

What does a 22 year mean in numerology?

A 22 year means long-range goal setting in numerology. In numerology, time is perceived in 9-year cycles, each with specific frequencies. Then you get the added intensity beyond its sum if you get a 22 year number, which adds up to 4. The foundational energy of the number 4 is about getting serious about the future, sharpening your skill set, and being methodical in getting your life in order.

Year 22 in numerology indicates the need to get planning, stay organized, and focus on building a detailed vision board of what you want to get or achieve in this lifetime. It is the year of setting foundations from the creative plans and ideas you’ve come up with the previous year.

Master number 22 was important in the year 2023 because it is a master number that symbolizes a lasting work or legacy. The number 22 was about progress, success in making your dreams come true, and prosperity in your life. It’s the number for someone who has the ability to leave a lasting legacy in 2023. Numerology 22 for the year 2023 called for working towards an enlightened mind to help lead you in discovering your divine life purpose.

Is the number 22 powerful?

Yes, the master number 22 is powerful because of its capability to turn dreams into reality. Master numbers like 22 are incredibly powerful in their own right, and they don’t need to be reduced to a single digit to reveal their essence. Besides that, numerology 22 has the power to build something out of nothing. It’s a number that is like an engineer or architect who takes a vision of something that hasn’t existed before and creates a detailed blueprint for it. And it doesn’t end there because the power of the master number 22 transforms even the loftiest of ideas into concrete realities with its practical wisdom, skills, and leadership drive.

What does 22 mean in astrology?

The master number 22 means two things in astrology. First, the number 22 signifies transformation and rebirth. Master number 22 is associated with Pluto, the planet of new approaches and perspectives. Pluto looks at things differently than others, coming up with new outlooks in life. Even when things seem impossible, Pluto gets it done. Second, the number 22 means living life to the fullest in astrology. Master number 22 represents Scorpio, the zodiac sign that’s all about passion, excitement, intensity, drive, and chasing experiences that make life worth living.

What does 22 mean in tarot?

In Tarot, the master number 22 means two things. First, number 22 means starting over from scratch or mastery over oneself. Numerology 22 is associated with the vibrational energy of The Fool card in Tarot. The Fool card in the Tarot signifies one’s complete surrender to the divine source. When this card appears, it represents being inexperienced and not knowing what to expect, but not in a bad way. The Fool represents a new beginning or beginner’s luck, opportunity, potential, and the youthful joy of walking into a new and exciting world. Second, number 22 signifies achieving your desired goals. Master number 22 is associated with The World card on Tarot, which denotes the highest attainment. When The World card appears, it represents fulfillment, achievement, and completion of a cycle of life followed by a pause just before a new cycle begins. The final card in the major arcana of Tarot signifies that the world is at your feet and whatever you’ve been going through in this lifetime is at its finishing point.

What does 22 mean in the bible?

The number 22 in the Bible means two things. First, 22 in the Bible means disorder and chaos. The number 22 represents double 11, which symbolizes chaos. In the Bible, mentions of 22 relate to disorganization. For example, the first king of Israel after it was split into two, Jeroboam I, reigned for 22 years. In addition, Arab, who was known as the worst Israelite king, was on the throne for 22 years. Another one who was known as one of the worst kings of Judah, Amon, ruled for two years beginning at age 22. Second, the number 22 means God’s power in the Bible. The Hebrew alphabet, which composes God’s words, has 22 letters. Furthermore, there are 22 books about Israel in the Old Testament, which represent God’s light and blessings to the Israelites. Lastly, Psalm 22 quotes the last words of Jesus, which explains the sufferings and glory of the Lord.

What numbers are most compatible with master number 22?

Numbers 11 and 22 have good compatibility because they look for the same things in a relationship, like commitment. They are both effective communicators and can make an ideal pair. That said, it’s important to strive to be considerate of each other’s needs, as numbers 11 and 22 express their emotions and desires differently. Number 11 is more open in displaying emotion, the opposite of number 22.

The compatibility of numbers 22 and 33 is strong because of their shared responsibilities and commitment to their relationship. Their partnership will be long-term and happy if they don’t take each other for granted. Otherwise, the number 33 is likely to become a doormat with its distaste for confrontation when paired with the number 22’s occasional temperamental outbursts.

Master number 22 is a powerful force in numerology. The number 22 represents growth and a higher purpose. People that have master number 22 as their number are eager to achieve success and experience life.

Does the number 22 resonate with you? Tell us your thoughts on numerology and master number 22 in the comments below.