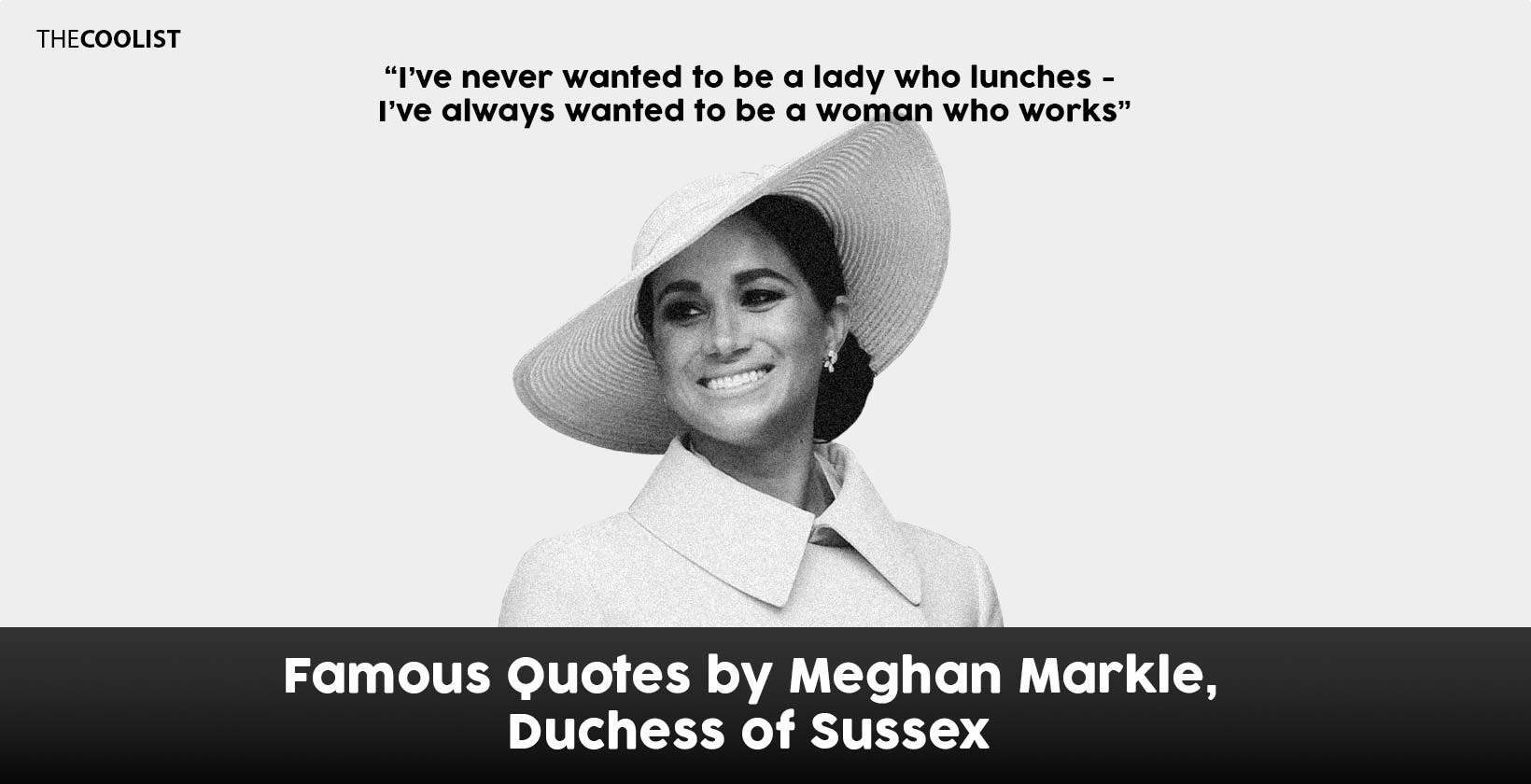 The best Meghan Markle quotes offer poignant insights into feminism and ethnicity. Below, we recount some of the Duchess’s most inspiring and eye-opening quotes.

I don’t sit around thinking about my titles and roles; I just do what feels right.

Meghan wasn’t born into royalty. And like few of us can understand, she went from nothing to starring in a US drama series to then marrying into a royal family from a country different from her own. This woman, who has been standing up for the rights of women, as well as voicing her opinion on ethnic discrimination, really deserves more credit than she’s been given.

This article is going to look at some of Meghan Markle’s most memorable quotes, including quotes on her opinion on motherhood, snippets from the controversial Oprah Winfrey show, and her feelings on love and marriage.

Below are nine inspirational Meghan Markle quotes that show the depth of the Duchess’s character. Meghan Markle is a prime example of a girl boss who came from nothing, excelled in her acting career, and stole the heart of a member of the royal family.

1. Reflecting on where I came from helps me to appreciate and balance what I have now.

2. I think the biggest part of being a girl boss in the office, at home, or anywhere you go is just knowing your value.

3. Make a choice: Continue living your life feeling muddled in this abyss of self-misunderstanding, or you find your identity independent of it.

4. You are complete with or without a partner. You are enough just as you are.

5. You draw your own box, and you introduce yourself as who you are … You create the identity you want for yourself.

6. With fame comes opportunity, but it also includes responsibility — to advocate and share, to focus less on glass slippers and more on pushing through glass ceilings.

7. Take things with a grain of salt, and find balance within your life. On your lunch break, leave to go and get some fresh air. You don’t need to make your life your job. I have to find that balance for myself, as well… I think you have to make time for yourself so that work doesn’t become the end-all be-all.

8. I’ve also learned that saying ‘no’ is just as valuable as saying ‘yes.’ It’s something that, I think, comes with age and really having a sense of your self-worth. And then you make choices based on that.

9. If you make a fashion mistake, that’s one that’s going to resonate for a very long time.

11. You have no idea what’s going on for someone behind closed doors. No idea.

12. Rude and racist are not the same.

13. Three days before our wedding, we got married. No one knows that.

14. I just didn’t want to be alive anymore. And that was very clear and real and frightening.

15. There were concerns and conversations about how dark his skin might be when he’s born.

16. The queen has always been wonderful to me.

17. It’s really important that young women be reminded that their involvement matters and that their voice is heard. Even if it feels like it’s small, it really can make an impact.

18. Women make up more than half of the world’s population and potential, so it is neither just nor practical for their voices, for our voices, to go unheard at the highest levels of decision-making. The way that we change that, in my opinion, is to mobilize girls and women to see their value as leaders and to support them in these efforts.

20. You can be a woman who wants to look good and still stand up for the equality of women. There’s no uniform for feminism; you are a feminist exactly the way you are.

22. When girls are given the right tools to succeed, they can create incredible futures, not only for themselves but also for those around them.

23. It’s not just about girls going to school and becoming smart girls — it’s knowing that those smart girls become influential women, and that ends up changing the world for the better.

24. When we empower girls hungry for education, we cultivate women who are emboldened to effect change within their communities and globally.

Below are three Megan Markle quotes on ethnicity that captures the struggles she faced as a biracial woman. Meghan has strong opinions when it comes to ethnicity coming from a mixed-race household. Her mother, Doria, is African-American, and her father, Thomas, is caucasian.

25. My dad is Caucasian, and my mom is African American. I’m half black and half white. Being biracial paints a blurred line that is equal parts staggering and illuminating.

26. My mixed heritage may have created a grey area surrounding my self-identification, keeping me with a foot on both sides of the fence, I have come to embrace that.

27. To say who I am, to share where I’m from, to voice my pride in being a strong, confident mixed-race woman. That when asked to choose my ethnicity in a questionnaire as in my seventh-grade class, or these days to check ‘Other,’ I simply say: ‘Sorry, world, this is not Lost, and I am not one of The Others.’

“Be Kind” quotes from Meghan Markle

Below are two “Be Kind” quotes from Meghan Markle. Meghan is an advocate for kindness above everything and is eager to spread a message of positivity.

The following three Meghan Markle quotes on love will give you a fantastic insight into her romantic inclinations.

30. Kindness is the No. 1 quality I look for in a man. You can see in how he treats anyone – from a CEO to a housekeeper – and it’s a reflection of how nice a guy is. Funniness and confidence come after that… When a guy approaches me, it’s fantastic if he can make me laugh.

31. I’m really big on day dates. If you go for a stroll, have a picnic or lunch with a glass of wine — it doesn’t get better than that.

32. It’s really attractive if a man has a skill that you want to improve in yourself. If you can learn from someone, then that’s sexy.

33. At the end of the day, if the guy is going to write the girl a letter, whether it’s chicken scratch or scribble or looks like a doctor’s note, if he takes the time to put pen to paper and not type something, there’s something so incredibly romantic and beautiful about that.

Marrying into royalty is like nothing any of us can expect, but these four quotes from Meghan Markle display how she feels about her marriage to Prince Harry, the Duke of Sussex.

34. I look at our son, and what a beautiful example that he gets to grow up with a father who is so comfortable owning [feminism] as part of his own self-identification. That there’s no shame in being someone who advocates for fundamental human rights for everyone, which of course, includes women.

35. We’re two people who are really happy and in love.

36. Just a cozy night. What were we doing? We were trying to roast a chicken. It was just an amazing surprise. It was so sweet and natural and very romantic. He got down on one knee . . . As a matter of fact, I could barely let him finish proposing, like, ‘Can I say yes now?!’

37. I think everything about Harry’s thoughtfulness and the inclusion of [Princess Diana’s stones] and obviously not being able to meet his mom, it’s so important to me to know that she’s a part of this with us … It’s incredibly special to be able to have this [ring].

Below are five Meghan Markle motherhood quotes that capture her views on being a young, working mother. After becoming a mum to both Archie and Lilibet, Meghan Markle has continued to work and be a doting mother to her children.

37. It’s magic. It’s pretty amazing. I have the best two guys in the world, so I’m really happy.

38. Other bucket-list items: I want to travel more, and I can’t wait to start a family, but in due time.

39. Being a working mom and traveling as well with a baby, my goodness, it’s a lot, but it’s all so exciting.

Quotes from Meghan Markle and Prince Harry about each other

The following four quotes about Prince Harry and Meghan Markle show the depth of feeling the pair have for one another. Whether you love them or hate them, their feelings for each other leave nobody uncertain.

42. We’re in love. I’m sure there will be a time when we will have to come forward and present ourselves and have stories to tell, but I hope what people will understand is that this is our time. This is for us. It’s part of what makes it so special that it’s just ours. But we’re happy. Personally, I love a great love story.  – Meghan Markle

43. We’re two people who are really happy and in love. We were very quietly dating for about six months before it became news, and I was working during that whole time, and the only thing that changed was people’s perception. Nothing about me changed. I’m still the same person that I am, and I’ve never defined myself by my relationship. – Meghan Markle

45. The fact that I fell in love with Meghan so incredibly quickly was sort of confirmation to me that all of the stars were aligned; everything was just perfect. – Prince Harry

Below, you’ll find answers to a few common questions about Meghan Markle.

Is Meghan Markle still a Duchess?

Yes, Meghan Markle is still a Duchess. Although Meghan Markle and Prince Harry stepped down as senior members of the royal family, the pair were still allowed to keep their titles of the Duke and Duchess of Sussex.

What did Whoopi Goldberg say about Meghan Markle?

Whoopi Goldberg said ‘Okay’ in a response to the Megan Markle interview with Oprah. During a discussion with Meghan McCain, Whoopi Goldberg simply shut down her co-host’s opinion of Markle with a simple “okay.” However, before Whoopi showcased her disagreement with her viral one-word reply, Meghan McCain said the following “We have two American women — Meghan Markle and Oprah Winfrey — who are single-handedly finishing what George Washington and our revolutionary counterparts did. I’m all for it.”

Is Meghan Markle an actress?

Yes, Megan Markle is an actress. Before marrying into royalty, Meghan Markle was an actress who began her acting career at Northwestern University. Markle’s most prominent acting role was as Rachel Zane in the prime-time legal drama Suits.

What did Meghan Markle say about Kate?

Meghan Markle said that Kate had made her cry before her wedding over flower girl dresses. However, in the media, many people initially believed that Meghan had made Kate cry.

The following quote is Markle’s recollection of the moment “No. [I didn’t make Kate cry] No, no, the reverse happened. And I don’t say that to be disparaging to anyone, because it was a really hard week of the wedding, and she was upset about something, but she owned it. She apologized, and she brought me flowers and a note apologizing, and she did what I would do if I knew that I hurt someone. To just take accountability for it.”