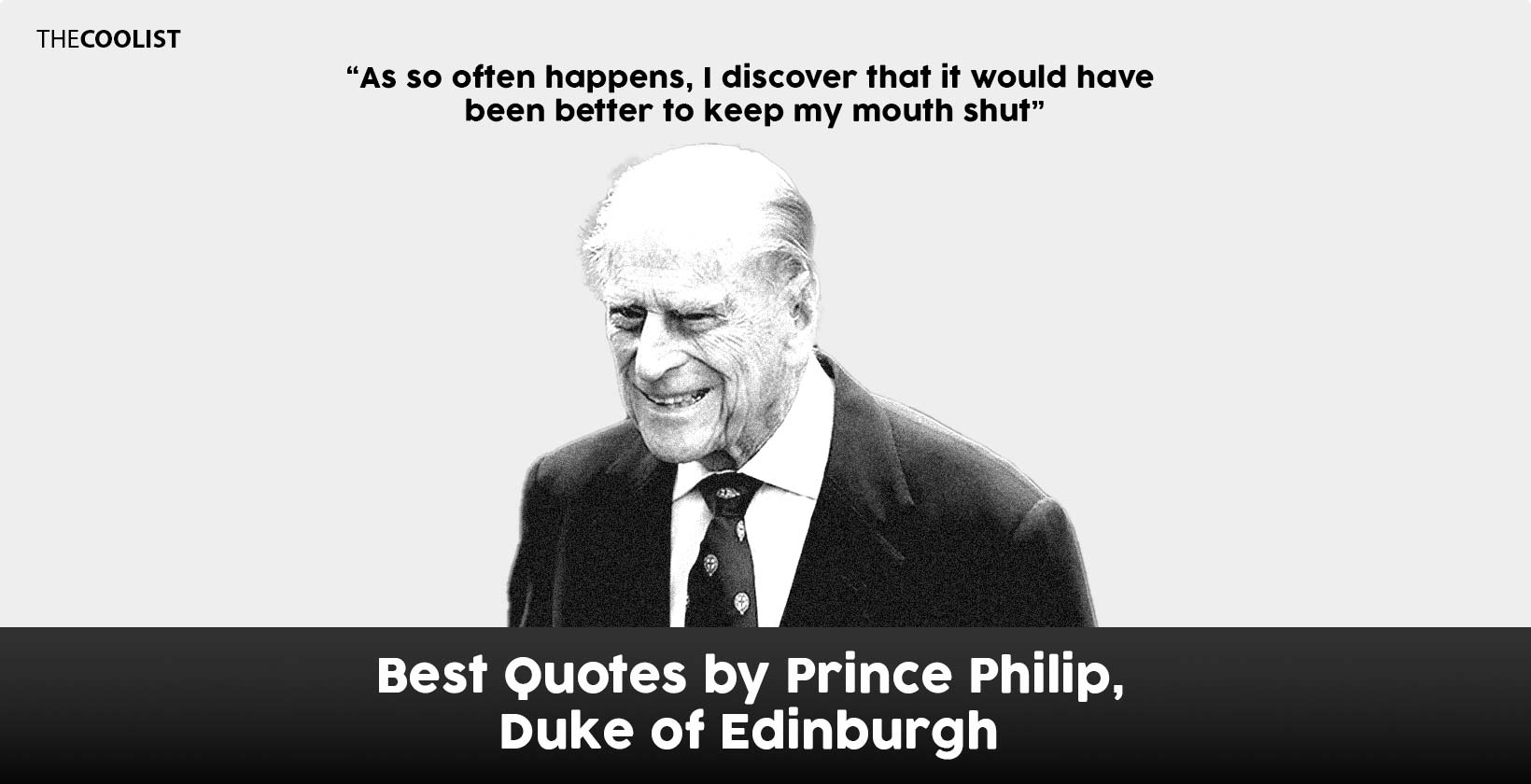 Prince Philip quotes are easy to find online, after all, the Duke of Edinburgh became somewhat famous for his public speaking gaffes during his lifetime. However, in later years, he readily embraced his ability to put his royal foot in his mouth.

Dontopedalogy is the science of opening your mouth and putting your foot in it, which I’ve practiced for many years.

Prince Phillip was a fascinating man, and his position as the royal consort required great concentration and dedication. The following collection of Prince Philip quotes accurately captures the man who stood beside the Queen for so many years.

Below are 7 famous Prince Philip quotes that that capture the sarcastic wit of the former royal consort.

1. Everyone has to have a sense of duty — a duty to society, to their family. I mean, you name it.

3. I reckon I’ve done my bit. I want to enjoy myself a bit now, with less responsibility, less frantic rushing about, less preparation, and less trying to think of something to say.

5. In the first years of the Queen’s reign, the level of adulation — you wouldn’t believe it. You really wouldn’t.

6. [Uttered after being offered fine wine during a visit to Italy] I don’t care what kind it is; just get me a beer.

7. I am the only man in the country not allowed to give his name to his children.

The following are a few of the comical things the Duke of Edinburgh has uttered over the years.

8. People think there’s a rigid class system here, but dukes have been known to marry chorus girls. Some have even married Americans.

9. Cannibalism is a radical but realistic solution to the problem of overpopulation.

11. I have never been noticeably reticent about talking on subjects about which I know nothing.

12. As so often happens, I discover that it would have been better to keep my mouth shut.

13. [Prince Philip on his youth] I was not the least aware I was any different from any of the others. It’s true I had this title of Prince, but it’s surprising how you can live it down. My favourite subject at school was avoiding unnecessary work.

14. If you travel as much as we do, you appreciate the improvements in aircraft design of less noise and more comfort — provided you don’t travel in something called economy class, which sounds ghastly.

15. [On his secret to a successful marriage] Tolerance is the one essential ingredient… You can take it from me that the Queen has the quality of tolerance in abundance.

16. It’s better to get out before you reach the sell-by date.

Prince Philip has quite the reputation for saying inappropriate things in public, and below is a selection of his most unseemly quotes.

17. It would have been very easy to play to the gallery, but I took a conscious decision not to do that. Safer not to be too popular. You can’t fall too far.

18. [When asked about the food at Buckingham Palace] I never see any home cooking — all I get is fancy stuff.

19. [In conversation with the head of Channel Four] So you’re responsible for the kind of crap Channel Four produces!

20. [To Elton John] Oh, it’s you that owns that ghastly car is it? We often see it when driving to Windsor Castle.

21. [To a student backpacking through Papua New Guinea] You managed not to get eaten, then?

23. In education, if in nothing else, the Scotsman knows what is best for him. Indeed, only a Scotsman can really survive a Scottish education.

24. [When addressing female politicians at a function] Ah, so this is feminist corner then.

25. [Talking about his daughter Princess Anne] If it doesn’t fart or eat hay, she isn’t interested.

26. Bugger the table plan, give me my dinner!

28. [To a female police office in a bullet proof vest] You look like a suicide bomber.

29. We don’t come to Canada for our health. We can think of other ways of enjoying ourselves.

30. [To a disabled man driving a mobility scooter] How many people have you knocked over this morning on that thing?

31. The Philippines must be half empty as you’re all here running the NHS.

Also read: The best quotes from Diana Princess of Wales

Prince Philip has stirred up plenty of controversy in his time as the royal consort, and below is a collection of his most contentious quotes.

32. A gun is no more dangerous than a cricket bat in the hands of a madman.

33. [To a group of deaf children listening to a Caribbean steel drum band] Deaf? If you’re near there, no wonder you are deaf.

34. [To a British student in China] If you stay here much longer, you will go home with slitty eyes.

35. [To a British student in Budapest] You can’t have been here that long — you haven’t got a pot belly.

36. [Asked of a Scottish driving instructor] How do you keep the natives off the booze long enough to pass the test?

37. It looks as though it was put in by an Indian … I meant to say, cowboys. I just got my cowboys and Indians mixed up.

38. [To survivors of the Lockerbie Pan-Am disaster] People usually say that after a fire it is water damage that is the worst. We are still drying out Windsor Castle.

39. It was part of the fortunes of war. We didn’t have counsellors rushing around every time somebody let off a gun, asking, ‘Are you all right — are you sure you don’t have a ghastly problem?’ You just got on with it!

41. [To a woman presenting him a gift during a visit to Kenya] You ARE a woman, aren’t you?

42. I would like to go to Russia very much – although the bastards murdered half my family.

43. [During a visit to the Cayman Islands] Aren’t most of you descended from pirates?

44. [After eating a vast breakfast cooked by French chef Regis Crépy] The French don’t know how to cook breakfast.

45. [Asked of an aboriginal leader at the Aboriginal Culture Park in Queensland, Australia] Do you still throw spears at each other?

Below are a few classic quotes from Prince Philip that have become well-known to the British public (and beyond) during his time as the royal consort.

46. Holidays are curious things, aren’t they? You send children to school to get them out of your hair. Then they come back and make life difficult for parents. That is why holidays are set, so they are just about the limit of your endurance.

47. It is my invariable custom to say something flattering, to begin with, so that I shall be excused if by any chance I put my foot in it later on.

48. [To a female solicitor] I thought it was against the law these days for a woman to solicit.

49. Any bloody fool can lay a wreath at the thingamy.

50. Human population growth is probably the single most serious long-term threat to survival. We’re in for a major disaster if it isn’t curbed…We have no option. If it isn’t controlled voluntarily, it will be controlled involuntarily by an increase in disease, starvation, and war.

The following are five of the most iconic quotes about Prince Philip, made by his wife, Queen Elizabeth II, and influential figures around the world.

51. Prince Philip is, I believe, well-known for declining compliments of any kind. But throughout, he has been a constant strength and guide. – Queen Elizabeth II

52. The Duke of Edinburgh has made an invaluable contribution to my life over these past fifty years, as he has to so many charities and organizations with which he has been involved. – Queen Elizabeth II

53. On Prince Philip’s many visits to Australia, we have come to know him as a man of compassion and service, personal warmth, intellectual curiosity, and generous spirit. – Reverend Kanishka de Silva Raffel

55. He was a towering symbol of family values and the unity of the British people as well as the entire global community. – Uhuru Kenyatta, Kenyan president

Why do people hate Prince Philip?

Many people hate Prince Philip because of his controversial and often prejudiced comments. That said, people’s feelings towards Prince Philip remain divided. There are those that disliked him and felt his comments were not fitting for his social standing and position as royal consort. Then, some of the public felt that Prince Philip was harmless and meant no offense with his comments. Either way, it’s obvious that he often failed to think before he spoke.

There is no denying that many of the Prince Philip quotes in this article could offend many; it is often more the timing of his comments that makes them that much more problematic. It’s true — Prince Philip had a tendency to be blunt to the point of rudeness. However, this bluntness can be attributed to the lavish lifestyle of the royals combined with the undeniable class differential in the United Kingdom.

Did Prince Philip have any redeeming qualities?

Yes, Prince Philip had many redeeming qualities. Prince Philip is often judged purely for his straight-shooting manner and frequent public speaking gaffes. However, looking deeper at his character, he was a good man — a doting husband and a highly regarded officer in the Royal Navy. The Duke of Edinburgh was a proud family man who was always there for his children and grandchildren. He was a pillar of strength to his family. Upon his passing, Prince William remarked that his grandfather was the first person he would turn to for advice.

Prince Philip was a highly ranked member of the British Royal Navy when he became the royal consort overnight. He went from being the leader of men to the quiet stalwart who lived in the public eye yet whose contributions lay primarily in the shadows. Prince Philip also created the Duke of Edinburgh Award Scheme, which is now found worldwide. He was proud of his heritage and the country he called home.