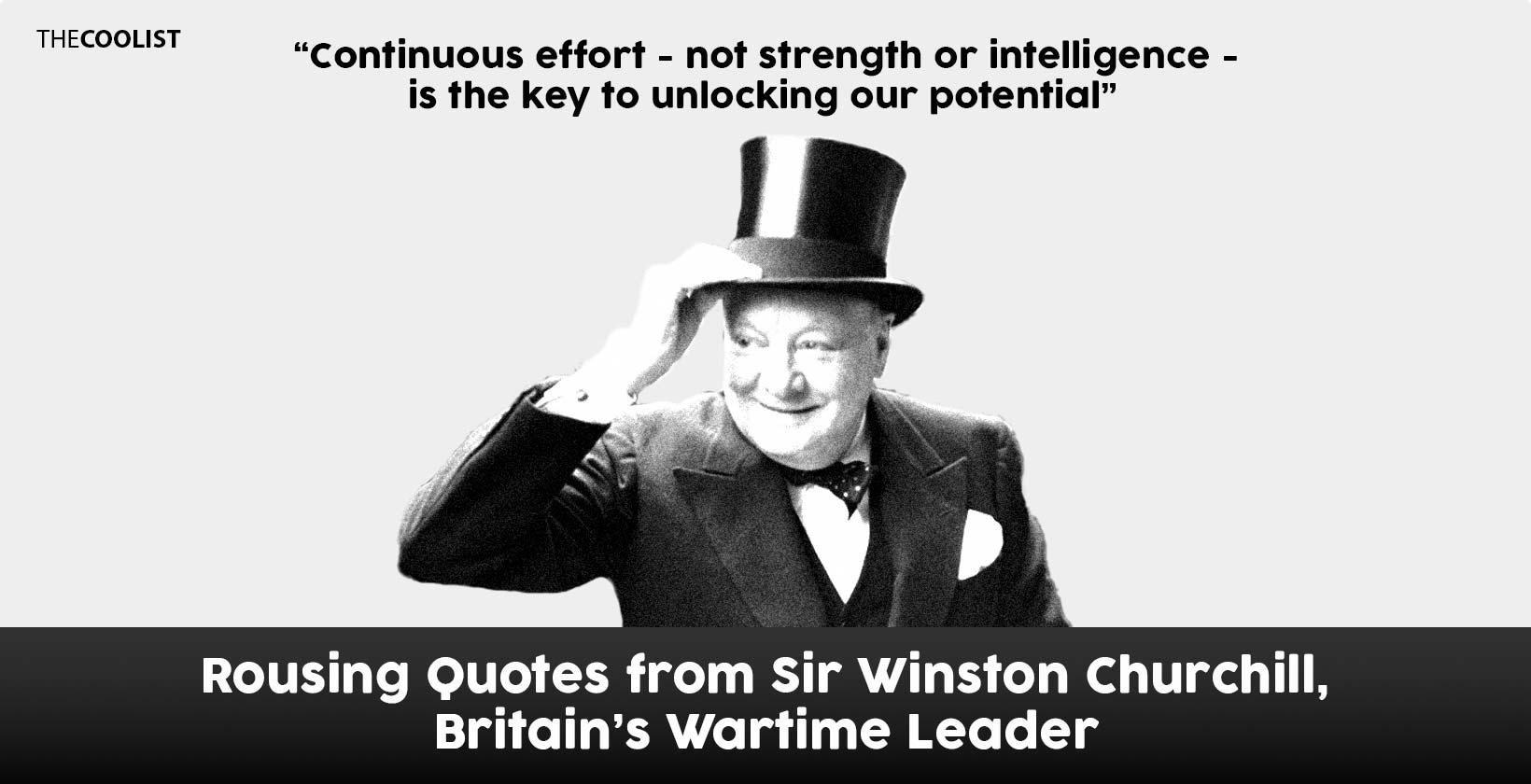 Winston Churchill quotes have a rousing honesty about them that’s just as relevant today as it was when they were first uttered. Below, you will find some of the most brutally honest and inspirational quotes from Britain’s wartime Prime Minister.

If you are going through hell, keep going.

There are few political figures who have left such an enduring legacy as Winston Churchill. A man whose reputation continues to split people’s opinions, especially when viewing the past with the sensitive eyes of the present.

Winston Churchill led England boldly through the Second World War and through its continued rebuilding of the 1950s. His contributions to the country and boundless, and the following collection of Winston Churchill quotes captures exactly how deeply he believed in his country.

1. [When accused of being drunk in parliament — this quote is often attributed to Churchill and is one of his most well-known quips, however, it is not confirmed whether it was ever spoken] I may be drunk, Miss, but in the morning, I will be sober, and you will still be ugly.

2. It is no use saying ‘we are doing our best.’ You have got to succeed in doing what is necessary.

3. It has been said that Democracy is the worst form of government except for all those other forms that have been tried from time to time.

4. It is a mistake to try to look too far ahead. The chain of destiny can only be grasped one link at a time.

5. I have never accepted what many people have kindly said, namely that I have inspired the nation. It was the nation and the race dwelling all around the globe that had the lion heart. I had the luck to be called upon to give the roar.

6. If you have an important point to make, don’t try to be subtle or clever. Use a pile driver. Hit the point once. Then come back and hit it again. Then hit it a third time-a tremendous whack.

The following eight Churchill quotes on war accurately capture the Prime Minister’s ability to rouse the spirits of those around him. Many of Churchill’s most well-known quotes came during the Second World War.

7. Never in the field of human conflict was so much owed by so many to so few.

8. An appeaser is one who feeds a crocodile – hoping it will eat him last.

9. Let party interest be ignored, let all our energies be harnessed, let the whole ability and forces of the nation be hurled into the struggle, and let all the strong horses be pulling on the collar.

10. Let us therefore brace ourselves to our duty and so bear ourselves that if the British Commonwealth and Empire lasts for a thousand years, men will still say, ‘this was their finest hour.’

13. The British Empire and the French Republic, linked together in their cause and in their need, will defend to the death their native soil, aiding each other like good comrades to the utmost of their strength.

14. If Hitler invaded hell I would make at least a favourable reference to the devil in the House of Commons.

Additional reading: A collection of ghastly quotes from Prince Phillip

Below are nine Winston Churchill quotes on success and failure. Churchill considered himself an optimist, despite his sometimes combative nature.

15. Success consists of going from failure to failure without loss of enthusiasm.

16. Attitude is a little thing that makes a big difference.

18. You have enemies? Good. That means you’ve stood up for something in your life.

19. If we open a quarrel between past and present, we shall find that we have lost the future.

20. Success is not final, failure is not fatal: it is the courage to continue that counts.

21. Continuous effort – not strength or intelligence – is the key to unlocking our potential.

22. It is wonderful what great strides can be made when there is a resolute purpose behind them.

23. Every man should ask himself each day whether he is not too readily accepting negative solutions

24. The farther backward you can look, the farther forward you are likely to see.

25. The greatest lesson in life is to know that even fools are right sometimes.

27. You will never get to the end of the journey if you stop to shy a stone at every dog that barks.

28. Kites rise highest against the wind – not with it.

29. There are a terrible lot of lies going about the world, and the worst of it is that half of them are true.

30. The English know how to make the best of things. Their so-called muddling through is simply skill at dealing with the inevitable.

31. One ought never to turn one’s back on a threatened danger and try to run away from it. If you do that, you will double the danger. But if you meet it promptly and without flinching, you will reduce the danger by half. Never run away from anything. Never!

33. Courage is rightly esteemed the first of human qualities because it has been said, it is the quality that guarantees all others.

34. If one has to submit, it is wasteful not to do so with the best grace possible.

35. All the great things are simple, and many can be expressed in a single word: freedom; justice; honor; duty; mercy; hope.

36. Every day you may make progress. Every step may be fruitful. Yet there will stretch out before you an ever-lengthening, ever-ascending, ever-improving path. You know you will never get to the end of the journey. But this, so far from discouraging, only adds to the joy and glory of the climb.

Churchill’s opinions on the monarchy

The following two quotes capture Churchill’s opinions on the monarchy. Winston Churchill had a very good relationship with King George VI. However, he had a very special bond with Queen Elizabeth II.

37. The monarchy is so extraordinarily useful. When Britain wins a battle she shouts, “God save the Queen”; when she loses, she votes down the prime minister.

38. The age of chivalry is not dead. Here is a Lady we respect because she is our Queen and we love because of the person she is.

Below are nine funny Winston Churchill quotes that never fail to get a chuckle. Churchill was a clever man with a wicked sense of humour.

39. I am prepared to meet my Maker. Whether my Maker is prepared for the ordeal of meeting me is another matter.

40. My most brilliant achievement was my ability to be able to persuade my wife to marry me.

41. Men occasionally stumble over the truth, but most of them pick themselves up and hurry off as if nothing ever happened.

42. Personally, I’m always ready to learn, although I do not always like being taught.

43. When the eagles are silent, the parrots begin to jabber.

44. History will be kind to me, for I intend to write it.

45. Broadly speaking, short words are best and the old words, when short, are best of all.

46. Everyone has his day, and some days last longer than others.

47. In the course of my life, I have often had to eat my words, and I must confess that I have always found it a wholesome diet.

The following five quotes from Winston Churchill on drinking capture the political leader’s fondness for a tipple. Churchill was a renowned drinker before, during, and after his political career.

48. All I can say is that I have taken more out of alcohol than alcohol has taken out of me.

49. The water was not fit to drink. To make it palatable, we had to add whisky. By diligent effort, I learned to like it.

50. My rule of life prescribed as an absolutely sacred rite of smoking cigars and also the drinking of alcohol before, after, and if need be, during all meals and in the intervals between them.

51. Meeting Franklin Roosevelt was like opening your first bottle of champagne; knowing him was like drinking it.

52. [In response to a female opponent saying, “If I were your wife I’d put poison in your tea!”] If I were your husband, I’d drink it!

Below are the eight best one-liners from Winston Churchill, proving that a quote doesn’t need to be long to leave a lasting mark.

54. In a war, you can only be killed once, but in politics, many times.

55. Ending a sentence with a preposition is something up with which I will not put.

56. A lie gets halfway around the world before the truth has a chance to get its pants on.

57. Broadly speaking short words are best and the old words, when short, are best of all.

59. The true guide of life is to do what is right.

60. Tact is the ability to tell someone to go to hell in such a way that they look forward to the trip.

Also read: Quotes on life and love from Princess Diana

Below you’ll find answers to some of the most common questions about Winston Churchill.

Who was Winston Churchill?

Winston Churchill was an English politician, soldier, and writer. Churchill served two terms as Prime Minister. His first term spanned the entirety of the Second World War. Churchill is one of the greatest prime ministers in English History. He was the first prime minister to serve during Queen Elizabeth’s reign.

When did Winston Churchill die?

Why was Churchill voted out?

Winston Churchill was voted out because his conservative party lost the general election in 1945, thus removing Churchill from his position as Prime Minster. While Churchill took over for a second term in 1951, he only remained in the position for four years. His rapidly declining health forced him to resign from his position.

Winston Churchill was prime minister for a total of nine years. However, he did not serve these years consecutively. Winston Churchill’s first term ran from 1940-1945 and then from 1951-1955.