There’s no way to determine what exactly it is that makes a band great. Sometimes their transcendent powers come largely from a single member, as with Freddie Mercury of Queen. Sometimes it’s the mix of personalities, as it was with The Beatles.

Bands sometimes attain legendary status with a single notorious album, like Sex Pistols’ Never Mind The Bollocks, Here’s the Sex Pistols. There’s no formula, so to claim that anyone can find the greatest bands from any single decade is preposterous. 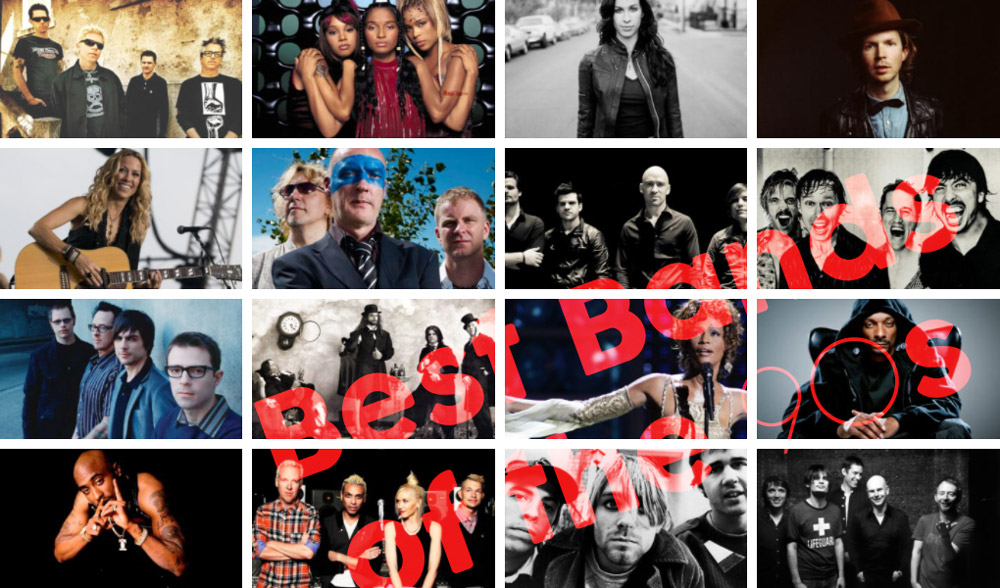 Greatness, in this case, was determined largely by the overall cultural impact of the band’s work. How many artists did they influence, how did they change the musical landscape, what did they bring to the artform, what did they leave fans with, and how did they contribute to music.

There are hundreds that were left off, so if you have a favorite, make your case in the comments. Otherwise, sit down and see what you should be listening to.

What Counts as a Band from the 90’s

This is a difficult call since there are bands who came out big in 1989, but it wasn’t felt until the 1990’s. Then there’s some who were marginalized, only receiving recognition later. There’s artists who dropped onto the scene in 1999 but weren’t noteworthy until later. It’s a wide spectrum, bearing exceptions to every rule.

To choose a “band from the 90s” they had to have been prolific during the period in question, done some of their most seminal work during that period, and be largely identified with that timeframe.

Metallica is a good example of a band that was heavily active in the 90’s, but is still considered an 80’s band, since most of their groundbreaking work happened a bit before the cutoff. The same with Michael Jackson or Guns ‘N’ Roses. The Bloodhound Gang would be an example of a noteworthy 90’s band very much identified with the era, though they’re out since novelty songs about animal husbandry and burning roofs do not greatness make.

Best Bands Of The 90s

The 90’s was a huge time of growth for the rap and hip-hop music, with many artists making a name for themselves in these genres, breaking into the mainstream. Perhaps most famous is a man who would give his life to symbolize the East Coast vs. West Coast rap scene, and the seriousness with which music was taken at that time.

Rock music was another genre that went through an overhaul in the 90’s, with alternative rock cropping up everywhere. Probably no single band was nearly as influential as the grunge rock of the murky, angsty, disillusioned Nirvana. Another tragic tale, the landscape of the rock and pop world was forever rocked by this band, whose influences are still being felt today.

Unlike rap and rock, both of which were seeing major upheaval in the 90’s, country was quietly plugging away with few breakout stars. Garth Brooks managed to make country more fun, with his stadium appearances and approachable lyrics, and gave city folks a more relatable kind of pickin’ and grinnin’ than the standard twangy steel guitarist.

Led by Gwen Stefani’s musical vision, No Doubt was a quiet riot of strong, catchy lyrics with socially conscious overtones, all fronted by the classy yet aggressive Stefani. Doing a lot for women in rock, No Doubt helped break barriers for female-fronted bands that could truly kick the PA.

Among the more thoughtful of the grunge rockers, Pearl Jam was a little more soulful and melancholy than the disenfranchised ennui of Nirvana. Crooning at times and then switching over to rampant attacks against social injustice, Pearl Jam is a mix of human interest and derisive condemnation.

Pop was soft and light in the 90’s, with Destiny’s Child and the incomparable Queen Bee Beyoncé Knowles landing in the latter part of the decade. Evidence that female minorities can bring the noise and empower, this legacy is both shamed and continued every time Beyoncé loses album of the year to a set of out-of-touch Grammy voters.

Hate them for being pretentious or adore their bold vision, Radiohead joined with oddity bands like Pink Floyd and Daft Punk as unique outlooks that are often not fully understood by the dominant culture. Proof that weirdos need love too, and that they should celebrate their oddities, rather than trying to be “normal.”

Though hardly a force these days, the inflammatory Marshall Mathers was the 90’s all over the place, even when we’d rather forget how obnoxious and intolerant we were back then.

ICP rose in the 90’s, and their particular brand of vicious, downtrodden rap and screaming rock still speaks to those who spend their lives scraping along on the forgotten lower end of society.

Fun, fast, and playful, The Offspring show an offshoot of rock that none anticipated. While others were going the route of depression, The Offspring were reveling in simple licks and a sense of wacky that was infectious, then would blindside with insight.

Celine Dion falls into this category too, but Houston really broke the mold of true, classy diva. Her vibrato singing is still emulated by every warbly-voiced young girl, and her stage power is that of an operatic star turned pop singer.

Weirdness personified, the enigmatic Tool gets notice as much for their oddball videos as for their industrial rocking and incisive, cerebral decrying of the establishment.

Largely considered to be the progenitors of Nerd Rock, Weezer is thought by many to be They Might Be Giants for the everyman, but only because they are.

Though it wouldn’t appear much in the actual 90’s, the rise of smart, thoughtful rock like Foo would become the norm over the next twenty years, proving the staying power and dominance of Dave Grohl, rocker, filmmaker, and human being extraordinaire.

Throwing Copper was a cornerstone album, and the spiritual, thoughtful, sometimes explosive band Live was one of the few groups who could make the human condition both so soft and so powerful.

The 90’s seemed built for REM, with the odd pop-culture references of Stipe’s music. Though they came from the 80’s, REM defined the alt-rock segment of the community, leaving many to consider whether they were with or against this reflective rock bastard child.

Though not as influential as Tupac, Biggie Smalls brought his own sad anthem to the mix, and he did it with a sense of style and swagger that truly made him the king.

One of many pejoratively-named “girls with a guitar” that came out of the 90’s, women who were writers, singers, musicians, deadly talents, and stunningly beautiful arrived in the 90’s with Jewel, Sarah McLachlan, and many others showing the heart and soul of rock and pop lies with the ladies.

Awkward and odd, Beck was a guy who was playing a rock star who actually became a rock star emulating himself. So strange, only the 90’s could have spawned him.

The angry industrial scene was dying out in the 90’s as the anger of the 80’s gave way to the Weltschmerz of grunge, but NIN was still out there screaming strong and renouncing God, offering anthems for the thrash metal crowd.

Alanis was one of the first ladies to make a pop/rock crossover that actually worked, and a vanguard who cemented empowerment for women in a new age. Though hardly Tina Turner or Aretha Franklin, Alanis had her own kind of sweet spirit, but could transform into a lady tiger at a snap.

If you aren’t in love with Shirley Manson, and don’t respect the hard-hitting attitude and pervasive message of Garbage, then you aren’t human. Welcome interstellar traveler!

25. Rage Against The Machine

Bob Dylan might have defined a generation with his protest songs about stopping the fall of bombs, but Rage is protest music for the new era. Polarizing and unrelenting, they’re the example to follow now more than ever: Caustic civil disobedience. Come back to us… 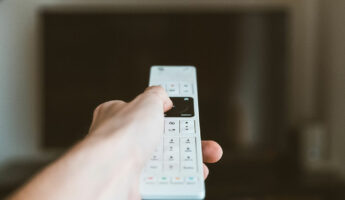 15 Most Iconic 90s Cartoons and How to Watch Them Today 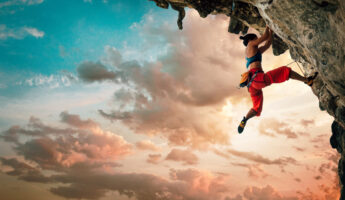 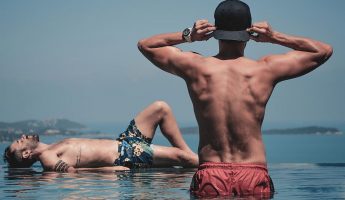