When it comes to low-power personal transit, E-bikes get all the press merely because they’re easier to ride, easier to use, and less likely to cause a serious injury than an electric skateboard. But life isn’t meant to be easy, it’s meant to be fun, and while there’s a lot to be said for pedaling along on an electronic bicycle, once you give the E-board a shot, you’re likely to find yourself hooked. It’s a rush that’s more playful than a bike and feels less like work and more like street slaloming. You haven’t lived until you’ve gone whipping down the blacktop like a demon, weaving along free from all fetters. Just you, your board, and the road.

What Makes a Good Electric Skateboard

This is a tough question with no clear answer, since different boards do different things. Going off-road means something wholly different than using it as a commuter conveyance, and those who want to do tricks are looking for something different still. What each board has in common are good materials that don’t breakdown, strong batteries that provide long rides between charges and satisfy your need for speed, a well-balanced frame that won’t put you on the pavement should you take a turn wrong, parts that are simple to find and replace, and support from the company should you need help with your board. Using these universal traits, we tracked down the smoothest, sturdiest, stablest, most satisfying electric skateboards in the world to date.

Those looking to snag a passable board for a bargain should set their eyes on the Blink line, as each offering is a master class of doing a lot with a little. Scant ounces under 8lbs, the maximum range is only about 5 miles, and the speed is only 10mph, but the Lite is built to last and comes in a fifth of the price of those that deliver more. Low-cost but hardly cheap, here’s your entry-level piece of note. Purchase: $300

A starter off-road e-board, serious adventurers will eventually want to build their own, but for going from pavement to grass to sand without a hitch, all on a beast of a board that is kind to newbies, here’s your solution. Able to run for hours on one charge, you can swap out the burly tires for sleek street models if’n you fancy. Purchase: $850+

Making a big noise out of Shanghai, the Stary Board is a lot of lightweight bang for your buck. It can go up to 19mph with a 200lbs load, yet is just under 9lbs itself, so carrying is never an issue. Tack on a gearbox and motor in-wheel and you’ve got a sleek runner that cuts only the best corners. Purchase: $900

A really solid board that tackles hills like a champ, will go 24 miles per charge and hit a top speed of about 18mph, the Slim Stealth is a little on the heavy side and gets a little pricey for what it has under the hood, but if you find a sale, snap up this reliable, long-distance goer. Purchase: $1,099+

You have a few options with E-Glide, each one more stunning than the last. The OG GT is a spunky little commuter, with the Lithium GT bringing in more push for better go power on the streets or lawns of the world. Want to hit the Burning Man Playa then tackle some dunes at the salt flats? Get the big AT, with its broad body for stable riding and terrain attack capabilities. Purchase: $1,200+

Big and heavy, the ZBoard dumps the handheld remote in favor of footpads on the body itself, which takes a child a few seconds to master. The weight keeps range close to 16 miles, but the top speed is a thrill-inducing 20. Plus, side handles make carrying as simple as toting around a light carry-on. Purchase: $1,300

The M1 was built with the notion of uninhibited flow first and foremost in the minds of the designers. To achieve this, they put two hub motors on the rear so that the M1 operates like an ordinary skateboard should you want that, then can turn on the juice without missing a beat. The real tale to tell are the swappable batteries that turn the 10 mile range into a quest to capture the horizon, one battery boost at a time. Purchase: $1,400

A pretty bamboo body hides the shrieking presence inside. With a range of about 20 miles and a top speed closer to 22, there’s plenty of meat and gumption underneath those runway good looks. Able to chug up hills like a champ, dump adrenaline into your system during acceleration, and corner like a fiend, there’s no better mix of style and spooky substance to be had today. Purchase: $1,449+

Don’t confuse the Onewheel+ with the odious flaming Hoverboard of yesteryear. This choice is designed to the hilt, with an all-terrain tire that can blaze a grassy trail or navigate city streets equally well. Gyros and stabilizing features galore keep you level and even at all times, even as you tilt to move through your day. An advanced software interface lets you tweak the operation of the whole vehicle to get more speed, longer range, or change your tilt settings. The price is well worth it so long as you plan to really make it work for the money. Purchase: $1,500

The original the Dual+ was wonderful, but had a nasty habit of batteries melting down. This is actually good news, as it means Boosted’s second attempt is both a little cheaper than it should be (though not as cheap as we’d like to see, given they’re coming out of the penalty box) and will be tested and re-tested to perfection. Top speed is good at 22mph, though the 7-12 mile range isn’t going to blow your hair back, except literally. Still, it’s a powerhouse that performs and looks smashing doing it. Purchase: $1,500+

The awkward name is derived from the 4 motors, one for each tire, that is loaded onto the board. It chews up hills, thanks to the 4-wheel drive makeup, can get up to almost 25mph and will go over 20 miles before you have to plug it back in. Proof that the electric skateboard is just learning to come into its own, the Qu4tro sets the bar. Purchase: $1,700

Though not technically an e-board, the Mellow Drive is a battery/motor combo that can turn your existing board into a 25 mph banshee. Typically it only gets about 10 miles to a charge, and it’s way more expensive than just buying another electric board, but if you like to retro-fit and tinker, or have a deck you can’t part with, the Mellow is music to your ears. Or, you can get one of their pre-fab boards. Purchase: ~1,800

There’s scant difference between the Carbon Street and Bamboo Street, but those differences are notable. Naturally, this is the more rugged of the two, able to take a battering without giving up. It’s also faster by 2-3 mph and can go a little further. If you need the extra push and durability, spring for it, but it’s overkill for most standard riders. Purchase: $1,960 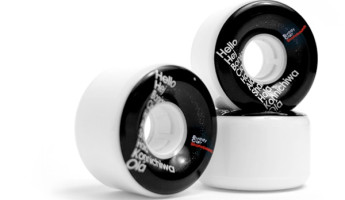