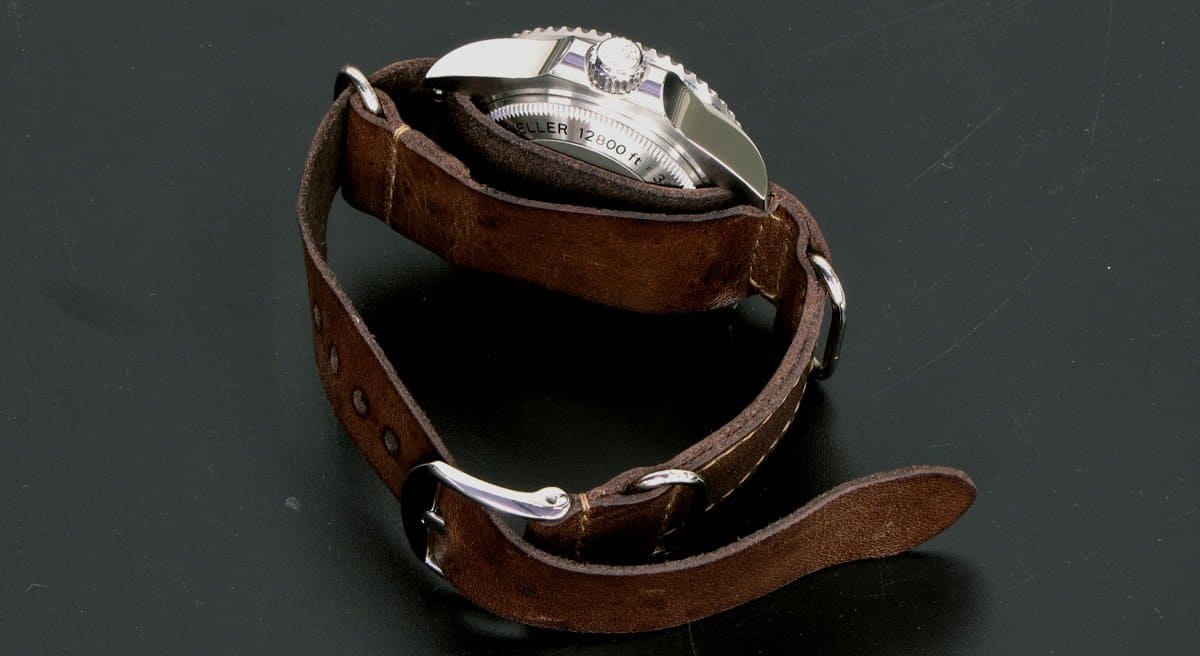 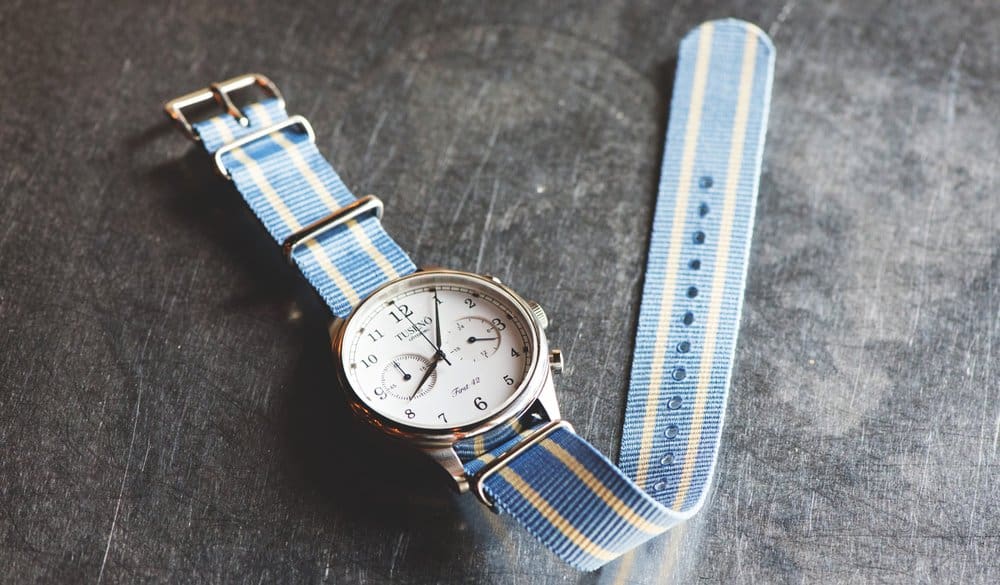 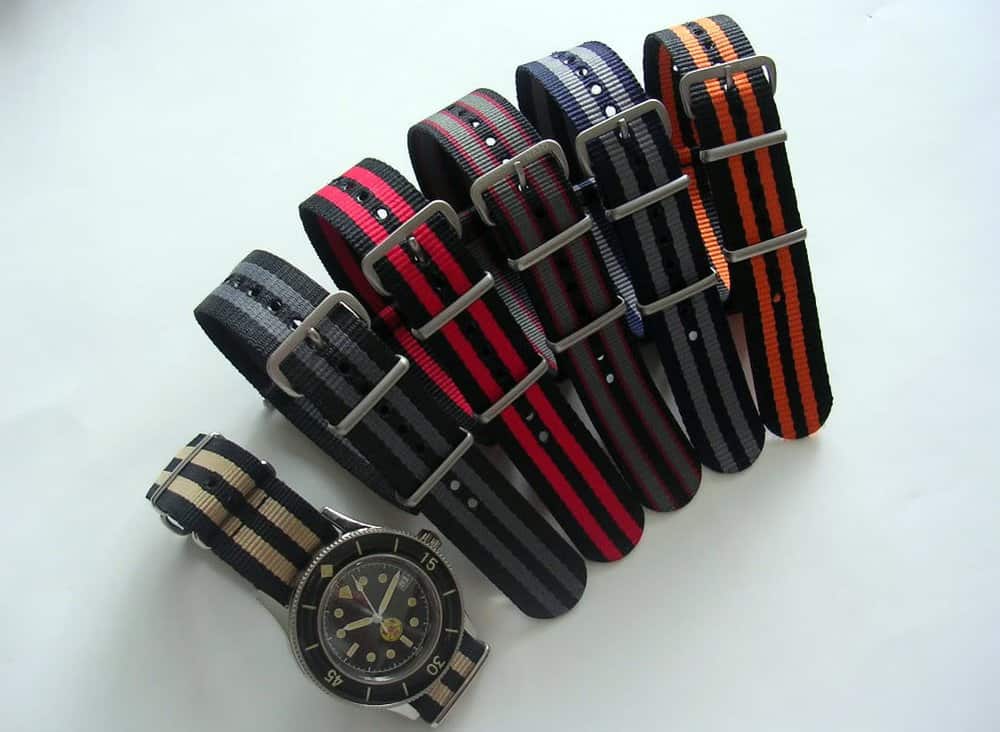 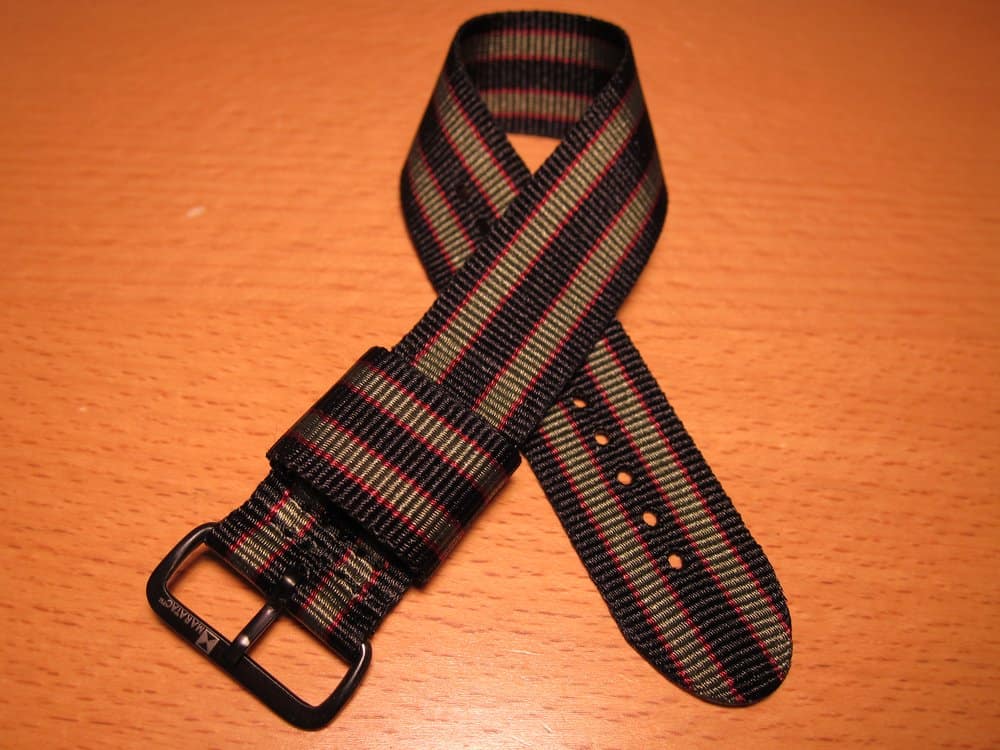 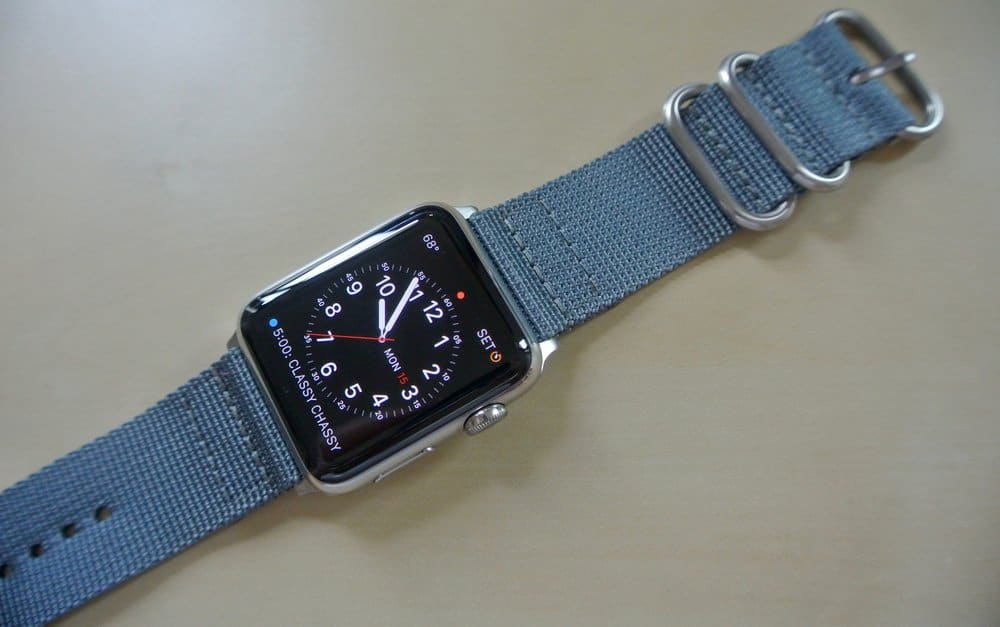 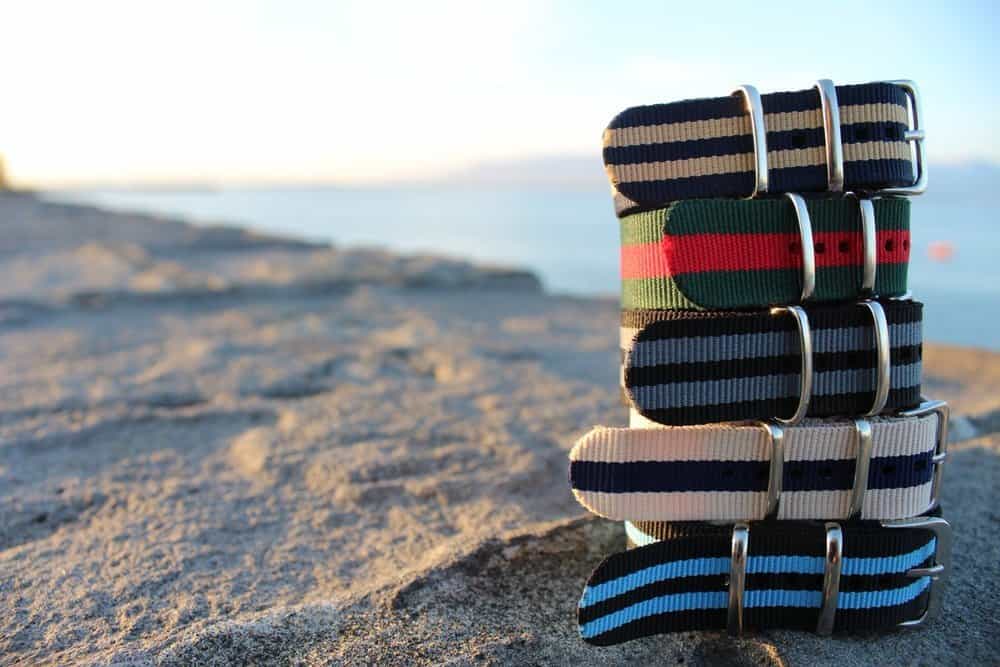 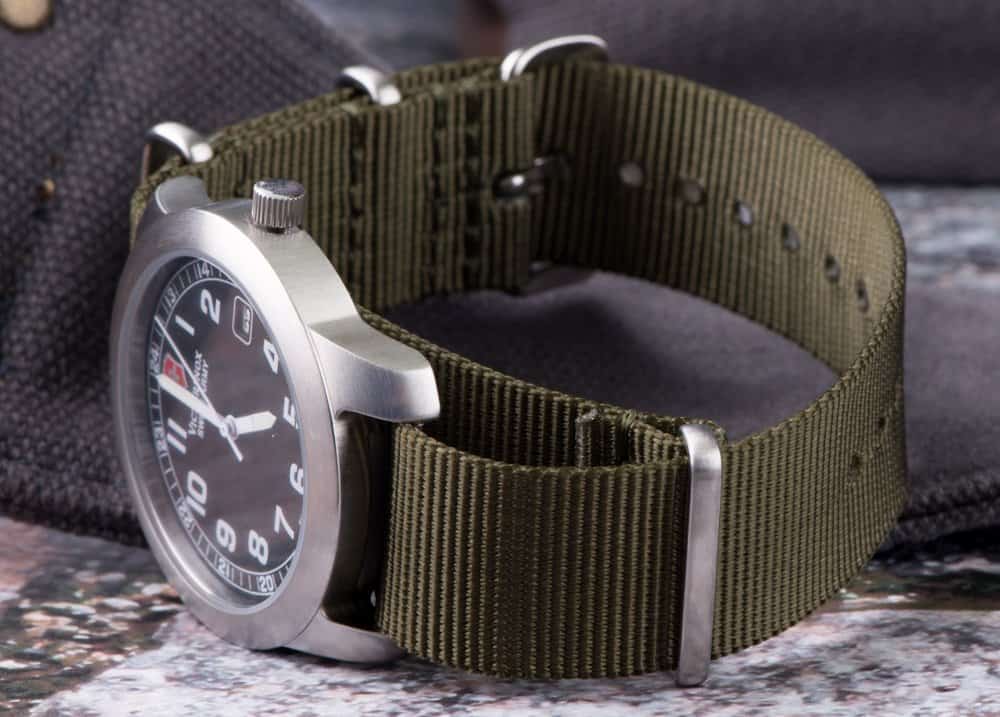 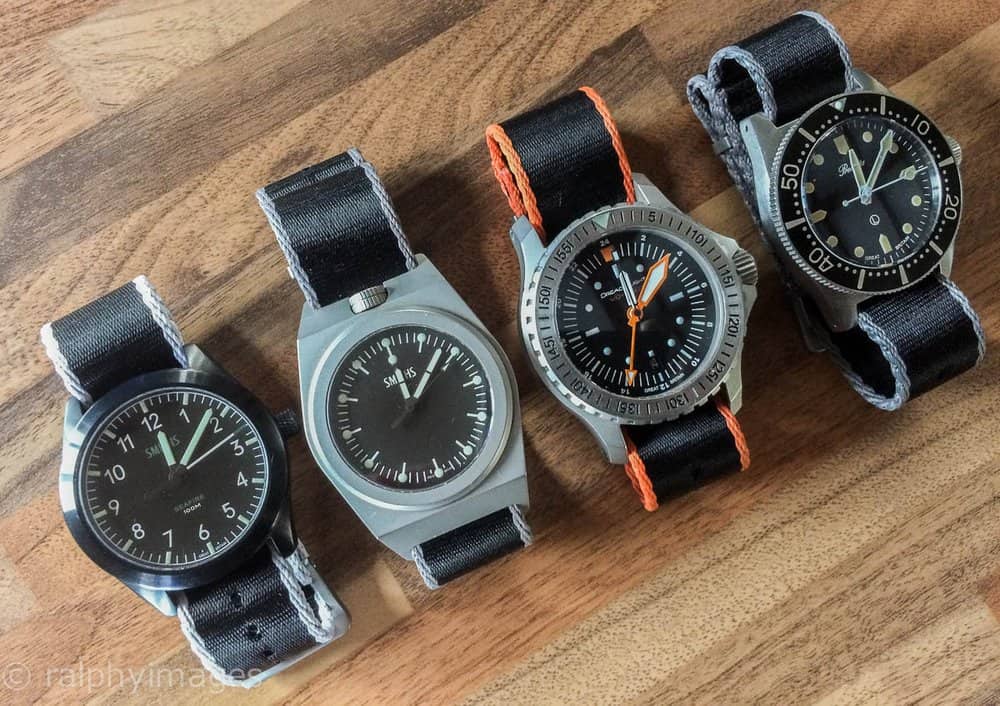 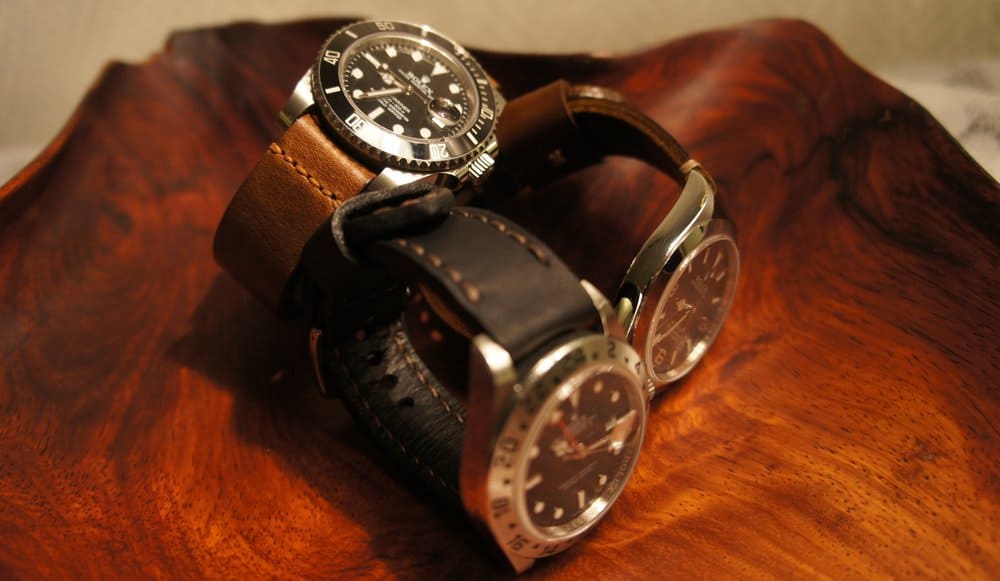 Not all NATO watch straps are created equal. Though they bear certain similarities, such as the sturdy, breathable design and thin, blocked-off rings for holding all the ends in place, there’s certainly such a thing as a good vs. a bad NATO band for your watch. Though they all might bear the same look, build, and even coloration, knowing what to look for when you snag a strap to keep your Rolex on your wrist can save you, quite literally, thousands of dollars.

What is a NATO Strap

Beginning in World War II, the NATO strap was designed for early divers who needed a smarter way to hold their watch than the leather straps that were popular at the time. Those had several design flaws that would become apparent in water, such as being too short, lacking in water resistance, and bearing a tendency to break, causing the watch to drop away, leaving the diver in a life or death struggle that they didn’t always win.

Thus, the NATO strap was devised. Largely produced using nylon, these straps – which bear no affiliation to the North Atlantic Treaty Organization that shares the acronym – had a pair of rings to hold them, so that should one fail there was a redundancy that would prevent the watch from being lost to the briny deep. They also are made of a single piece of fabric which loops around both the top and bottom of a watch face. This sets them apart from other straps that have two distinct pieces, with one attaching to the top spring bar and one attaching to the bottom.

The single strap design creates the redundancy that holds the watch in place, and offers additional adjustment features for expanding, contracting, and otherwise altering the fit, all without needing to buy extra equipment.

To this day, the NATO style strap – along with the ZULU, which is a similar band of nearly identical form – is largely thought to be the best way to hold a timepiece since it’s more comfortable, more reliable, more adjustable, and bears smarter engineering than most standard watch straps.

An increasing number of watch manufacturers now have a NATO strap as part of the package, which makes it easier to get them without needing to find an aftermarket solution. For those who buy a watch that doesn’t come with said strap, all you need to do is remove the factory band for your watch, or take it to a jeweler who will remove the watch face from its current strap, leaving it ready to be fitted for a NATO. At that point you can add whatever fixture you choose, or have a jeweler do it for you.

Since watch bands are meant to be replaced, this is a relatively simple procedure which most can do themselves, and those that can’t can have done for a nominal fee.

Note: When you buy a NATO strap, you will need to know the lug width of your watch.

There’s NATO straps of every stripe, but there’s a few rules for finding a good one. Foremost among them is to seek out nylon rather than leather. The reason behind this is that NATO straps were made to supplant leather, offering a lighter, simpler, lower maintenance solution to wrist woes. By choosing a leather NATO band, you negate many of their best properties, and aren’t sticking to a true NATO way of life.

It’s not only a denial of the origin, but leather bands are prone to wearing out and won’t give you anywhere close to the same weather and water resistance that can be found in nylon. They’re also more expensive to maintain since you’ll need to keep the leather healthy, while you can just dunk the nylon style in some water and it’s back in fighting shape, no oils or special cleansers required.

Now that you’re primed, all that’s left is to pick the best band for your needs and move on down the road.

Individual bands are far less important than the brands that back them. While these simple loops of nylon should all theoretically stand up to the same level of strain and abuse, only those crafted with a little extra care actually prove themselves in the field.

Maratac is largely considered the biggest player in the NATO game, bearing a whole bench of smartly designed NATO straps that are all military spec’d and ready for action. They started with the designs put out by the British MOD (Ministry of Defense) and then began producing better than required. Soft, strong, and woven like masterpieces, there’s little that rivals a Maratac.

Omega gets a lot of credibility for making some of the best NATO straps on the market, but the issue here is price. Granted, they make fine gear, but it’s difficult to justify spending $200 on a strap, which is what you’ll find more often than not when you shop Omega’s outlets. Bold, gorgeous, and built for movement as much as being seen, it’s nice kit if you can afford it.

From flashy, splashy, colorful and fun all the way down to the most staid pieces you’ve ever wrapped around your wrist, Crown & Buckle make good products in all kinds of colors, sizes, and styles. At prices that are kind enough for any budget.

Simply because nylon is the more traditional material of choice for NATO items doesn’t mean you must choose it. Leather lovers who want soft, supple items that have the NATO build rendered in various gorgeous hides will find the most options to sink their teeth into with StrapsCo. They also branch into all manner of exotic options, alongside the old standbys.

Truth in advertising, Best Nato literally has some of the longest lasting, most fetching NATO choices out there. Thoughtful, fashionable, and unique, if you can’t find something from them, maybe a NATO band isn’t what you need.

Clockwork Synergy plays fast and loose with what is technically defined as a NATO strap, offering not only leather choices, but two-piece items that seem to have almost wholly abandoned the NATO notion in favor of more unremarkable options. Despite their slapdash grasp of what kind of wristwear they’re making, they make each item to exacting standards, and make finding the right band for your needs easy to do on their smartly laid out website.

If there’s a gap in the Gnomon lineup, we have yet to find it. There’s not much flash to be had here. Simple, stable craftsmanship is what they bring to the table, all at a price that’s as kind as anything out there.

Though their online store leaves plenty to be desired, the affordable, bombproof gear TF produces more than makes up for it. They even have special clasps and built-in features to many of their items that factors in a whole new layer of protection and style.

When you want to go the bespoke leather route, Bas & Lokes will help keep you covered, for a price. At least you never need to worry about being another watch strap in the crowd when you pay for this privilege.