Lighthouse Pictures: 22 Stunning Spots Where the Sea Meets the Shore 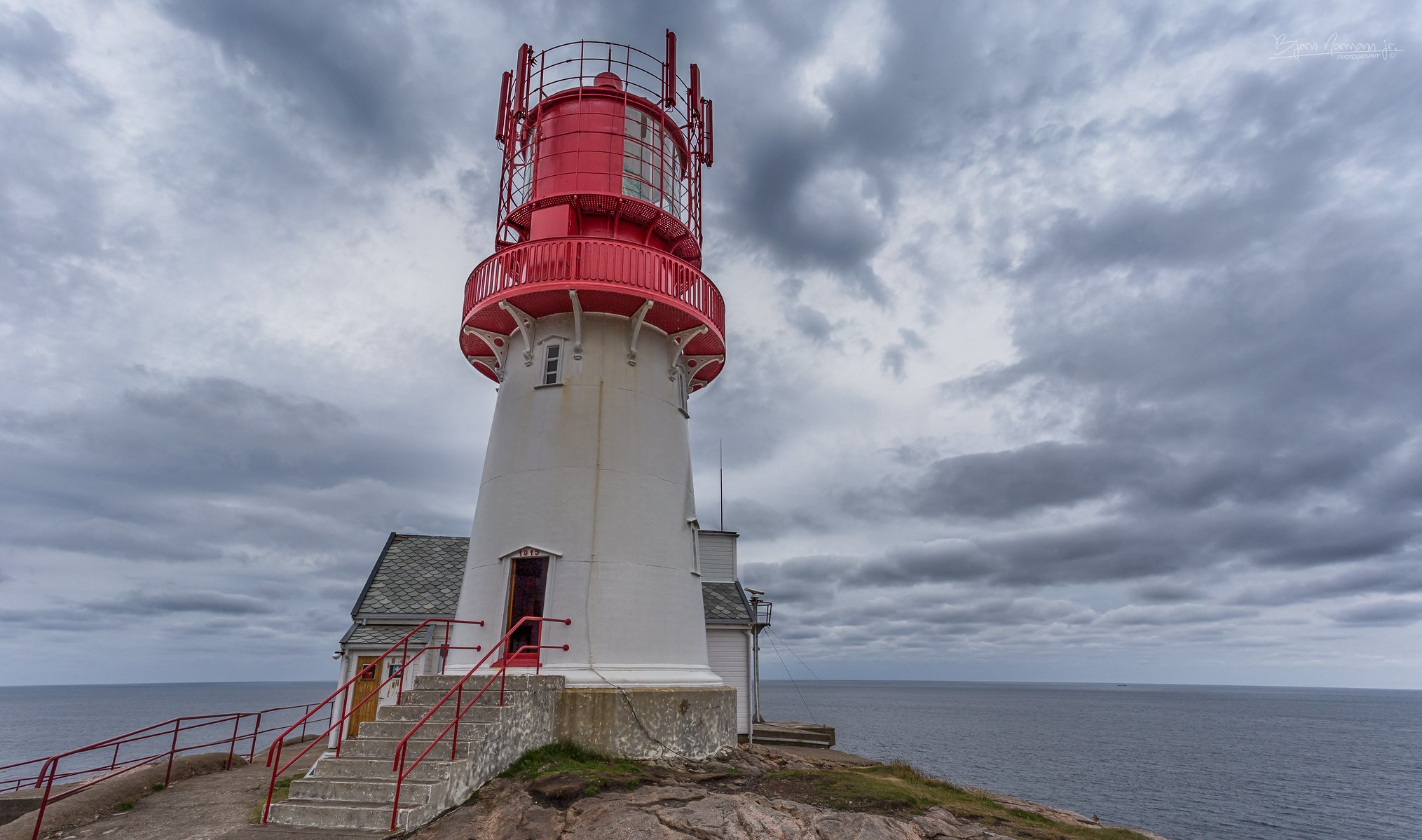 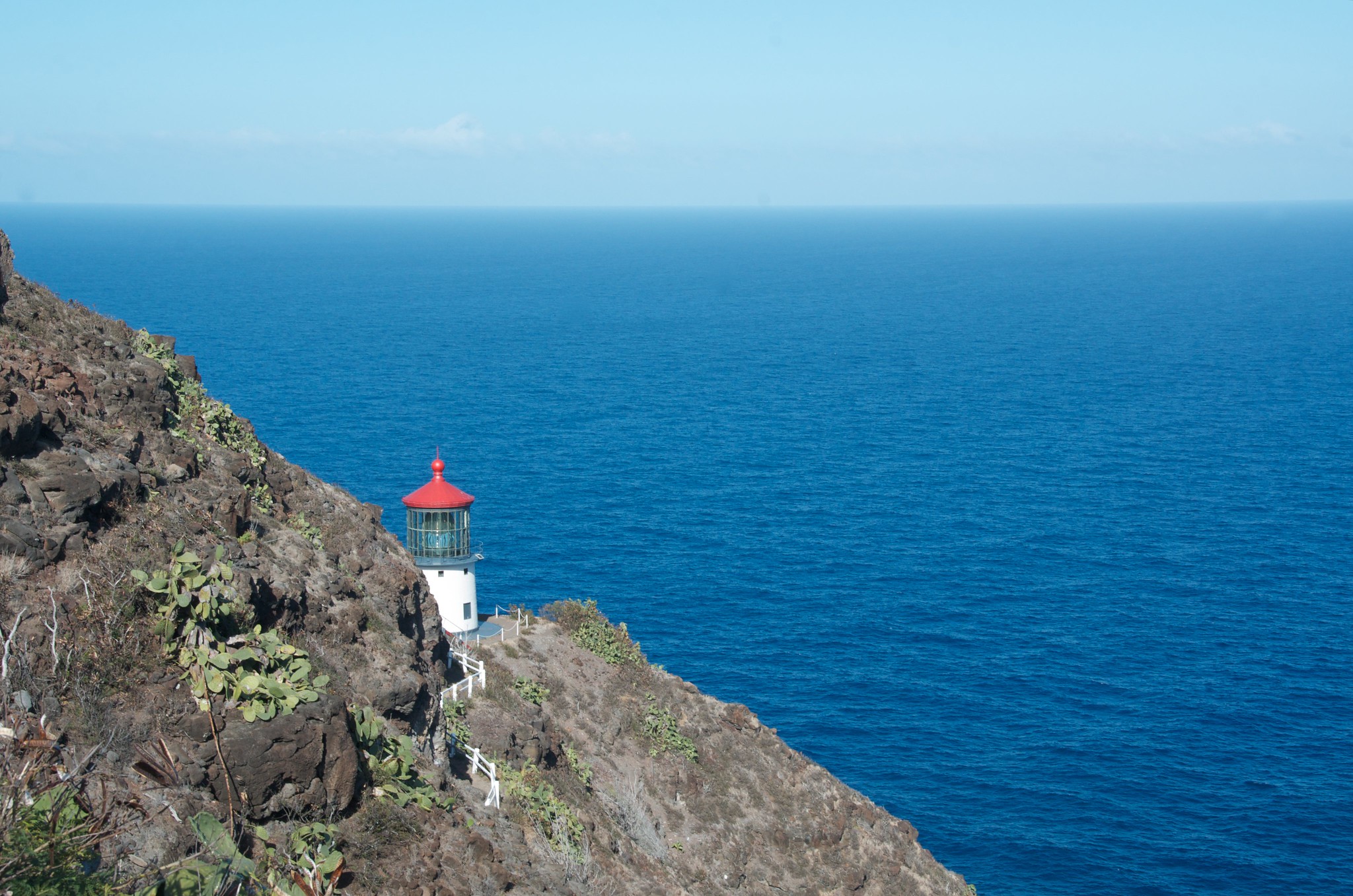 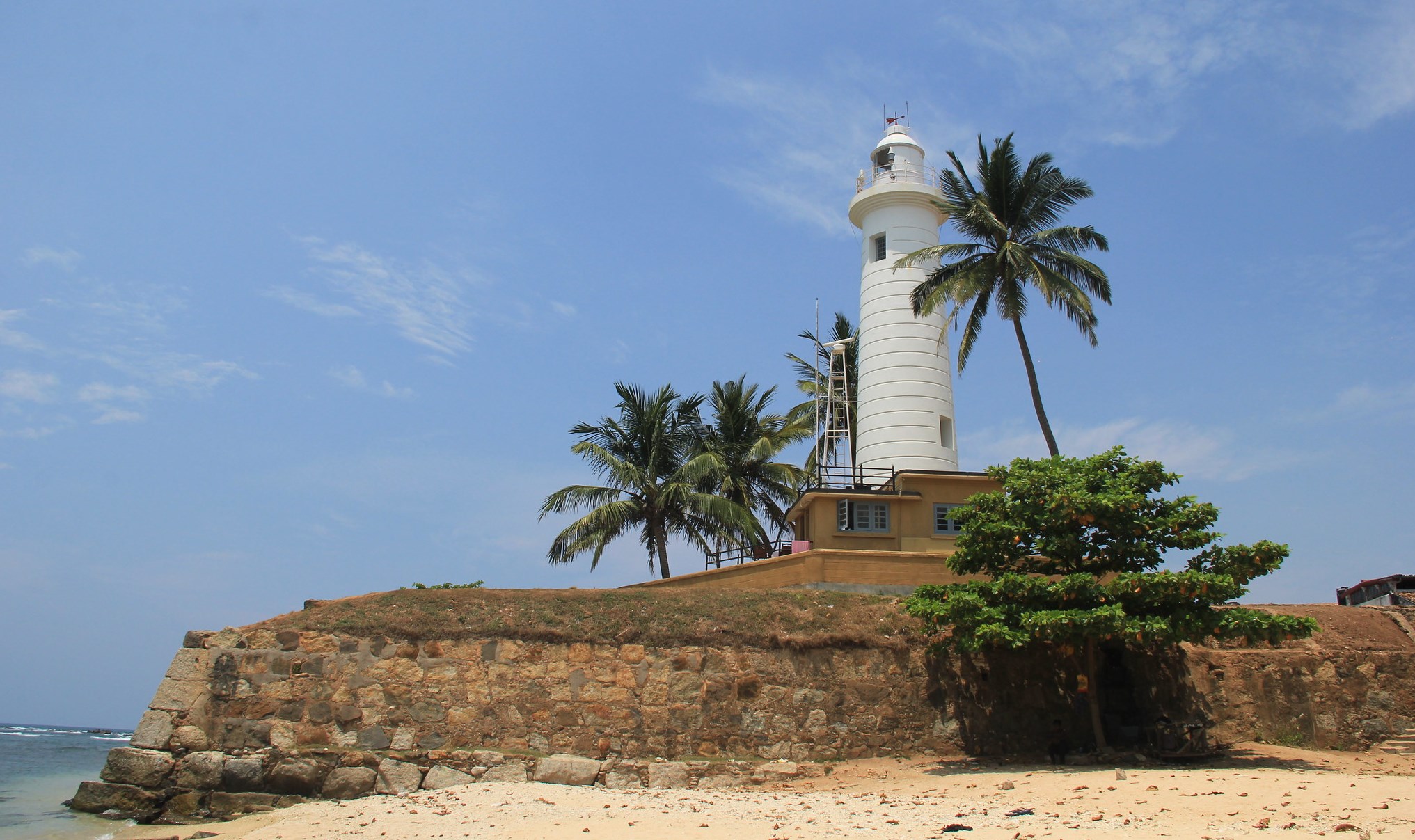 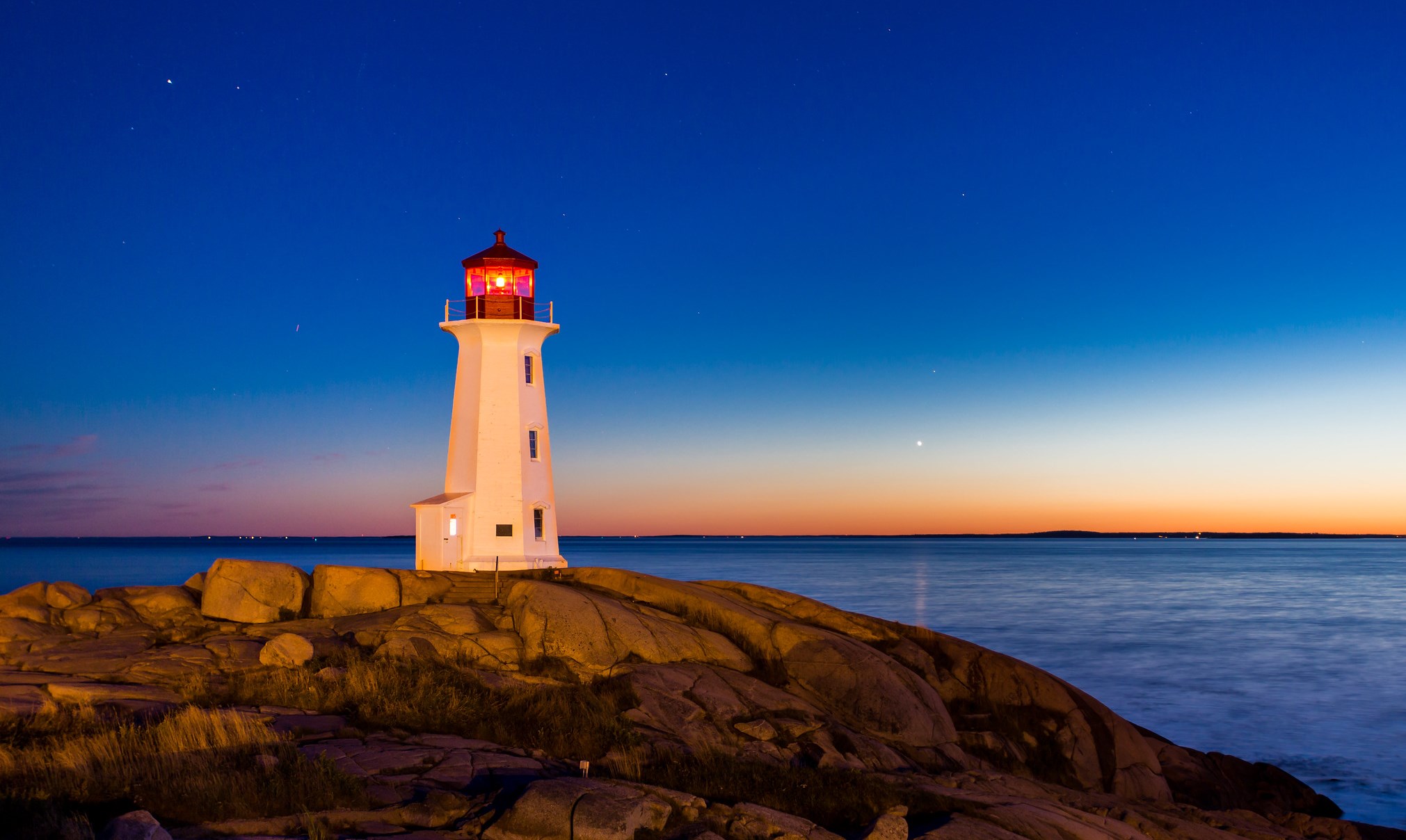 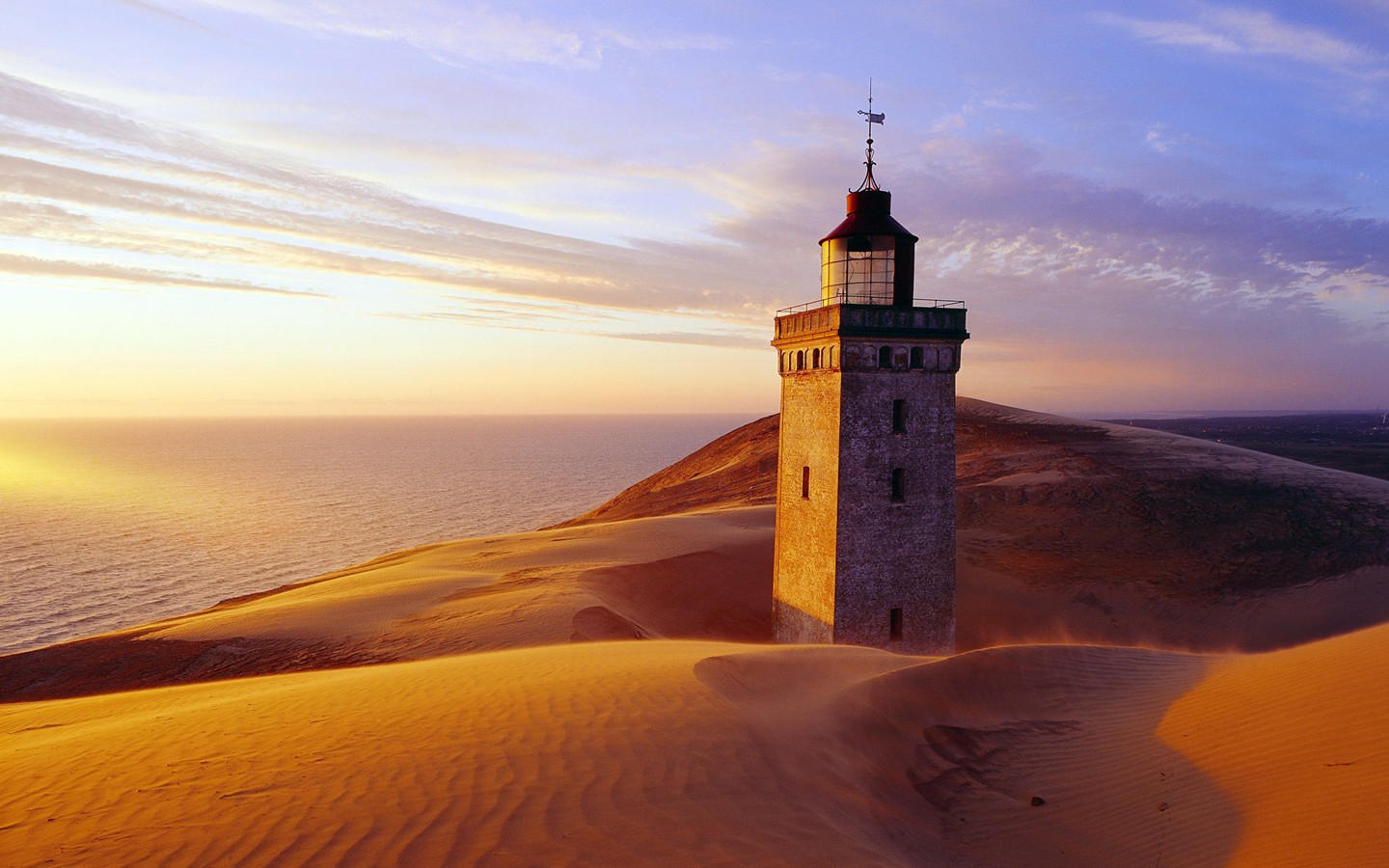 Lighthouses and photography go together like Thomas Kinkade paintings … and lighthouses. By their very nature, lighthouses exist in some of the most idyllic and chaotic places in the world, where storms are common, and the grandeur of the sea meets the land.

Sometimes violent and powerful, occasionally as calm as a mountain lake, a lighthouse picture can capture the full range of human emotions, so long as the camera rests in the right hands.

To celebrate these works of nature, architecture, and the people behind the lens, we’ve sought 22 pictures that celebrate all that is glorious in lighthouse photography. 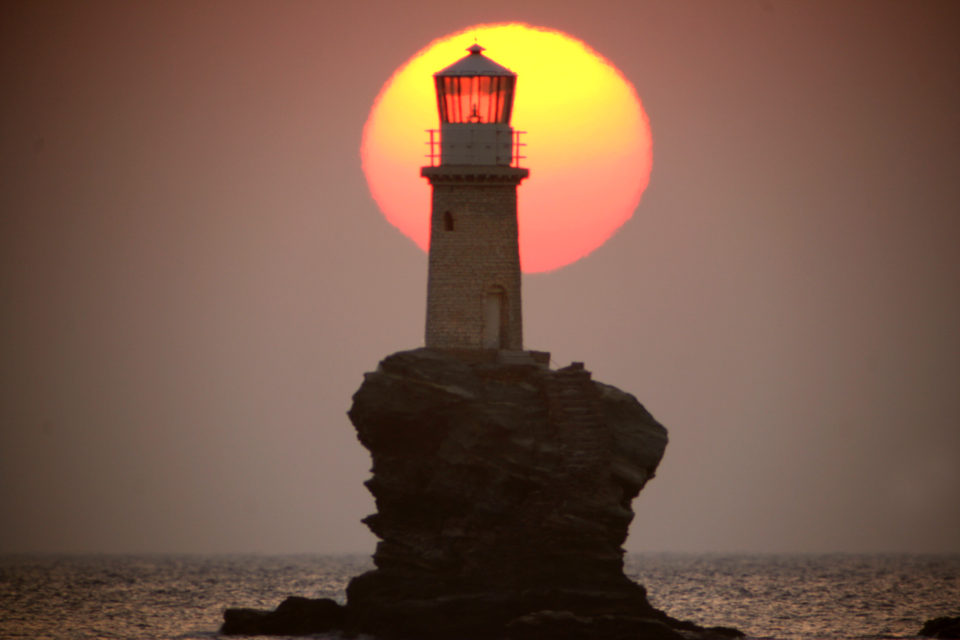 Situated atop a tiny jut of rock off the island of Andros in Greece, this small and steadfast house is a mixture of human endeavor and nature that have stood against years of erosion. Weathered steps lead off into the cliff face showing where the sea has reclaimed the land around this outcropping. 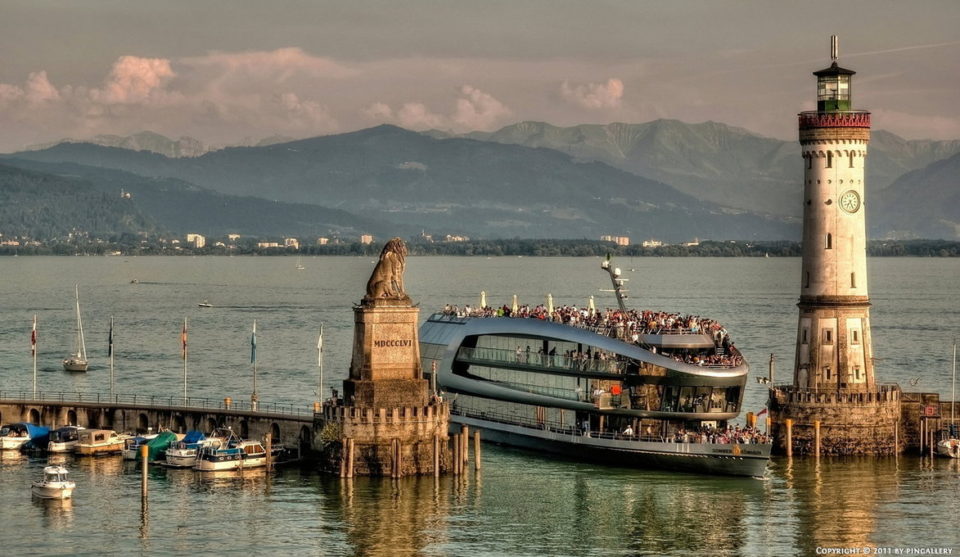 The southernmost lighthouse harbor entrance in Germany, the lighthouse on the right, was made in 1812, with the rest of the harbor taking twenty more years to finish. On the left is the Bavarian lion. This photo counterpoints the traditional with the modern as a sleek ship slides along beside the two-hundred-year-old masonry. 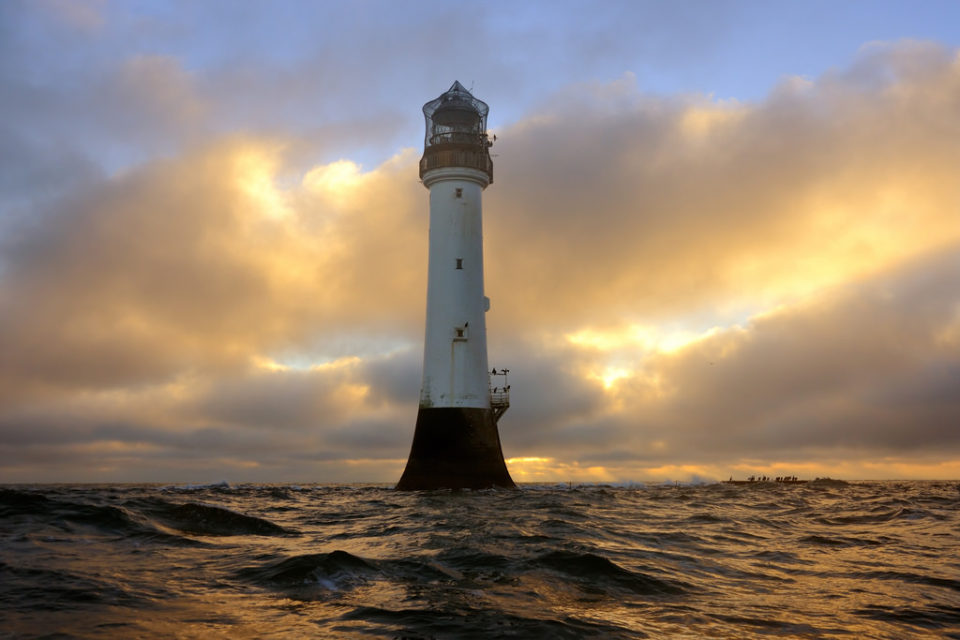 A dozen miles off the Scottish coast, where some of the finest whiskey is made, stands Bell Rock lighthouse. This majestic structure appears to hover atop the waves. However, the sense that this lighthouse sits directly atop the water is but an illusion. Only when viewed from above, can one see the submerged rocks that hold this lighthouse above the lapping waves captured in the foreground. 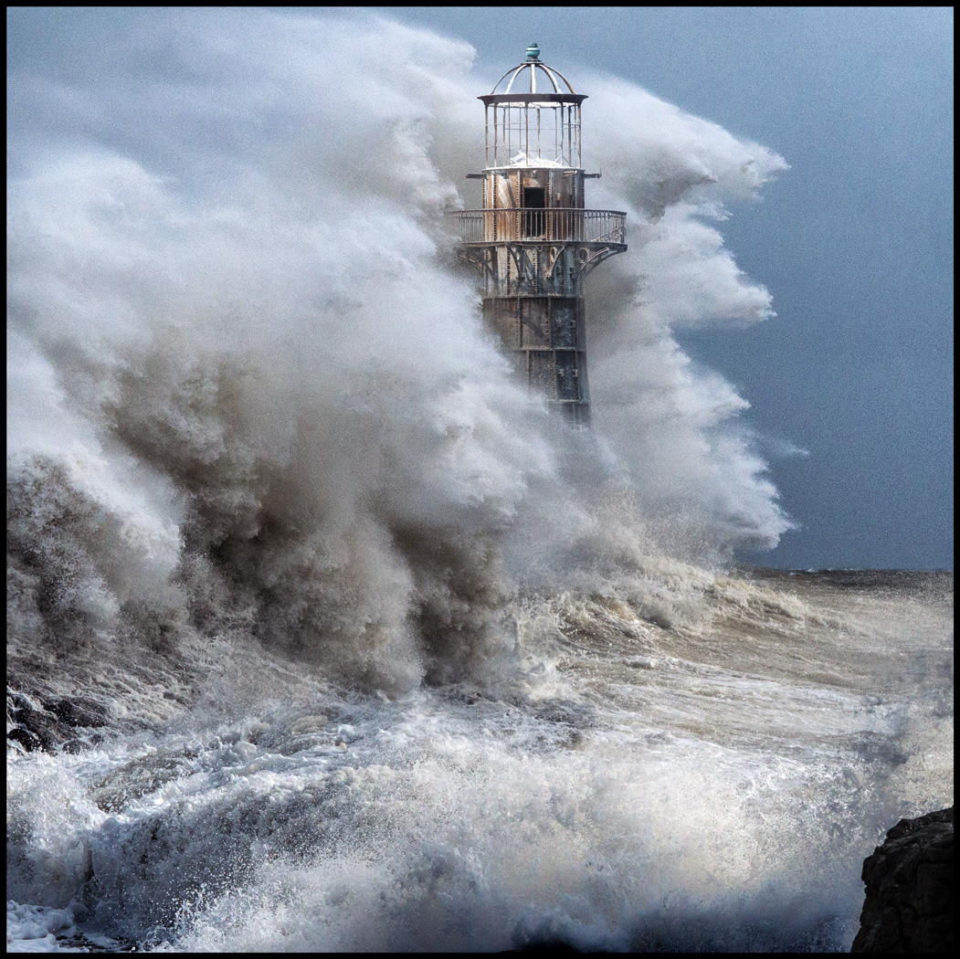 Ironworks often adorn lighthouses, but this English masterpiece uses it from base to crown. Though this causes some oxidation, as seen around the works near the doorway, it also allows the monument to stand against the often violent sea around it. 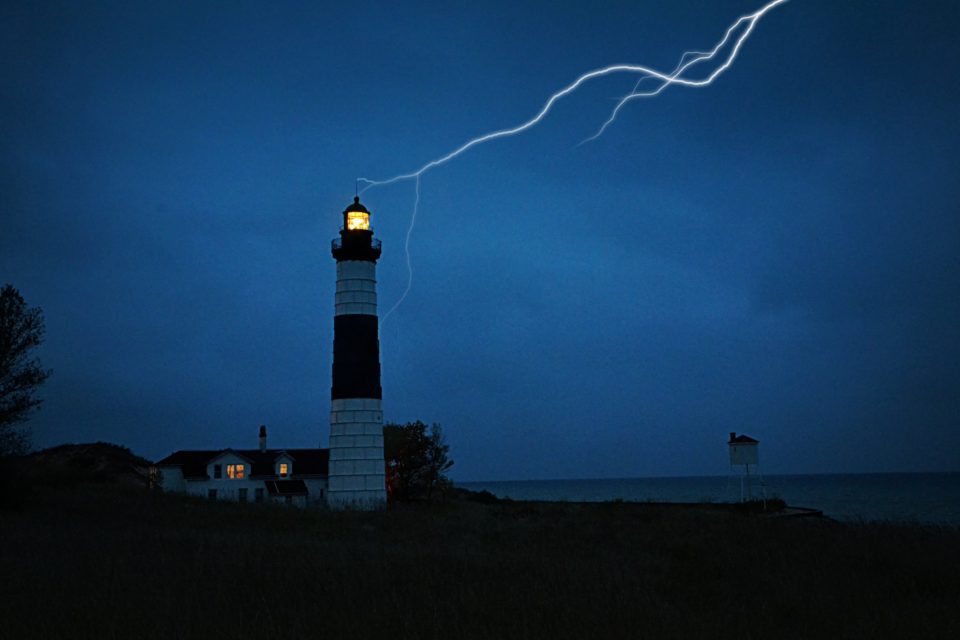 Claims that this simple lighthouse is haunted are perpetuated by the unpredictable weather that requires it also to be a lightning rod. Furthermore, the moment of impact captured here by gentleman adventurer Robert Sims paints a wonderful picture that conjures up all manner of macabre images. Though we can’t suggest enduring the danger that such a photo requires, we applaud the results wholeheartedly. 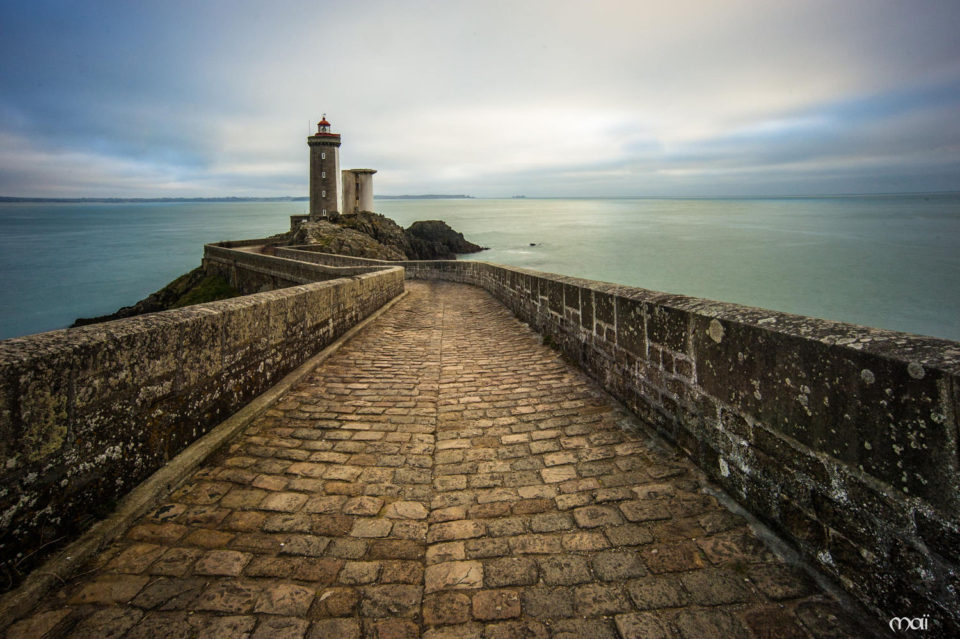 At a distance, the Petit Minou could be mistaken for a modern construction. Still, with the weatherbeaten stones in the foreground, it becomes easier to see how the building is a piece of history. First lit in 1848, the lighthouse is still in operation today, guiding ships to safe passage around the submerged rocks lining the roadstead of Brest. 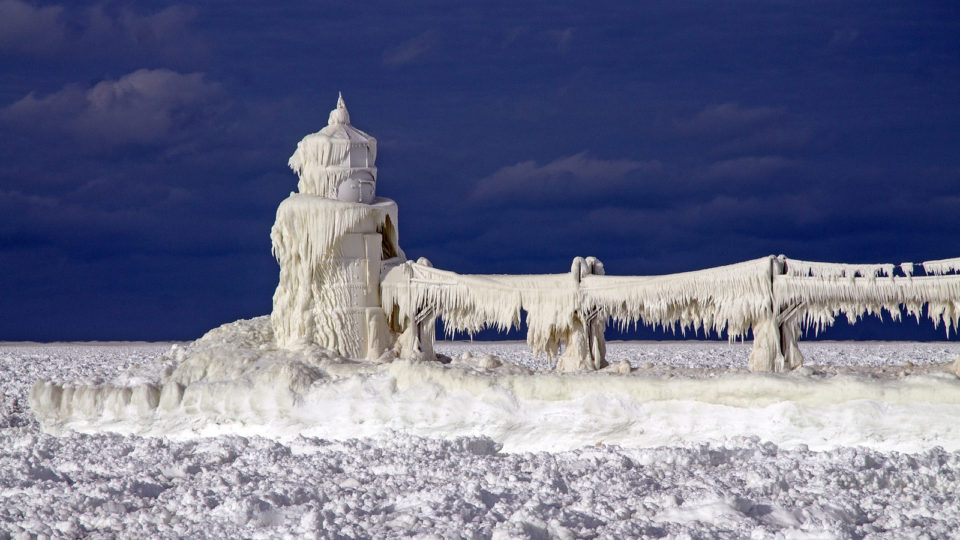 The St. Joseph lighthouse could easily be mistaken for an Antarctic marvel. But, in truth, it sits on Lake Michigan. This iconic image is an excellent example of how powerful lighthouse pictures can be. This legendary shot came about after the lighthouse was coated in ice during what is colloquially known as the Polar Vortex. A stark example of the madness of weather that surrounds the Great Lakes region. 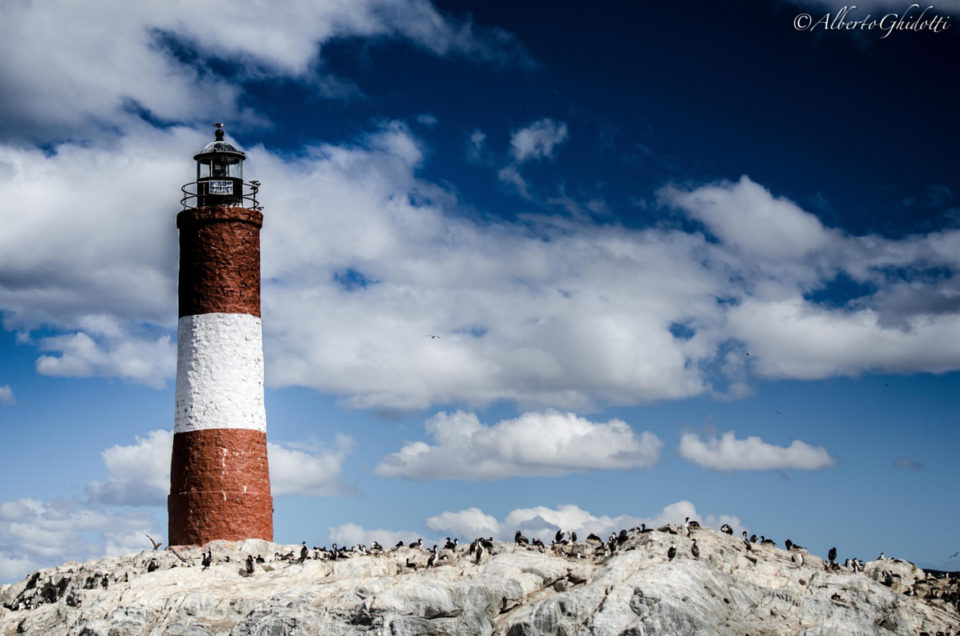 Texture is the key to this photograph, which enshrines the profound work that goes into creating a lighthouse. This picture captures the depth of craftsmanship that went into creating this Argentinian sentinel. 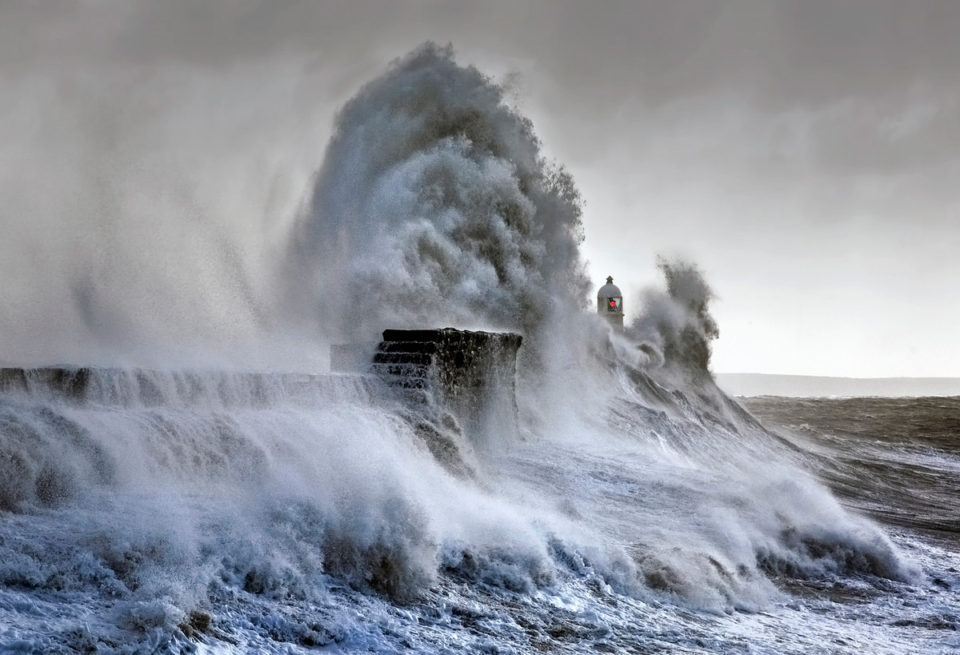 Photographer Steve Garrington chronicled the buffeted Porthcawl Point just to show how this tiny titan regularly endures raging seas. Huge swells crashing over it are commonplace. However, the eternal red eye never fails to cut through the spray, warning seafarers during the choppiest of tides.

Built in 1860, this Welsh dragon was the last active coal and gas-powered lighthouse in the UK before being upgraded to just gas in the 70s. It finally moved to electric power in 1997. 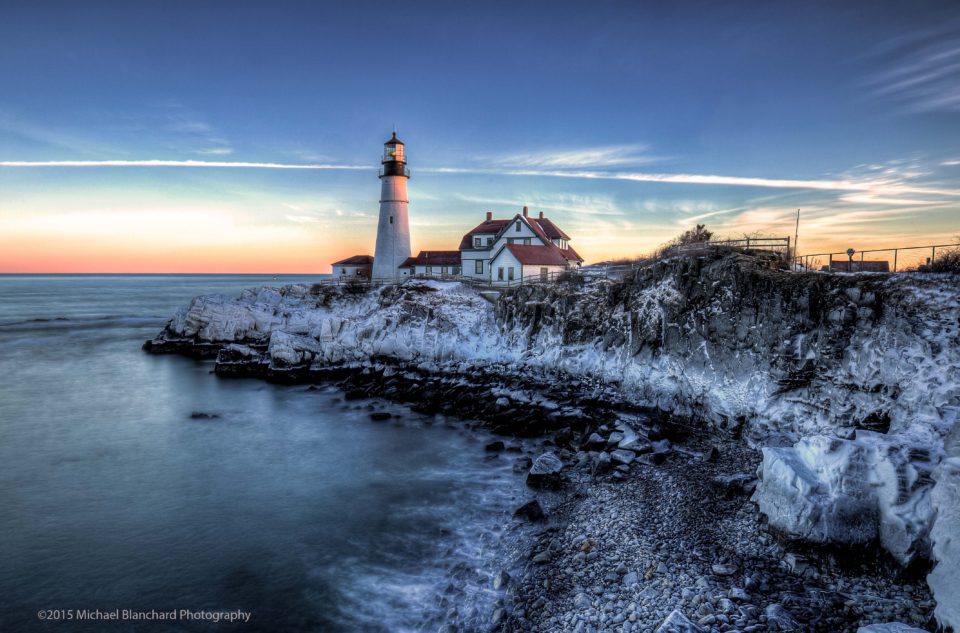 Cape Elizabeth in Maine has never looked so idyllic or artful as it does in this shot from Michael Blanchard, who has made it his life’s work to show the glory and the heartache that comes with a life beside the sounding sea. Though hard to believe, this is untouched by brush or software. 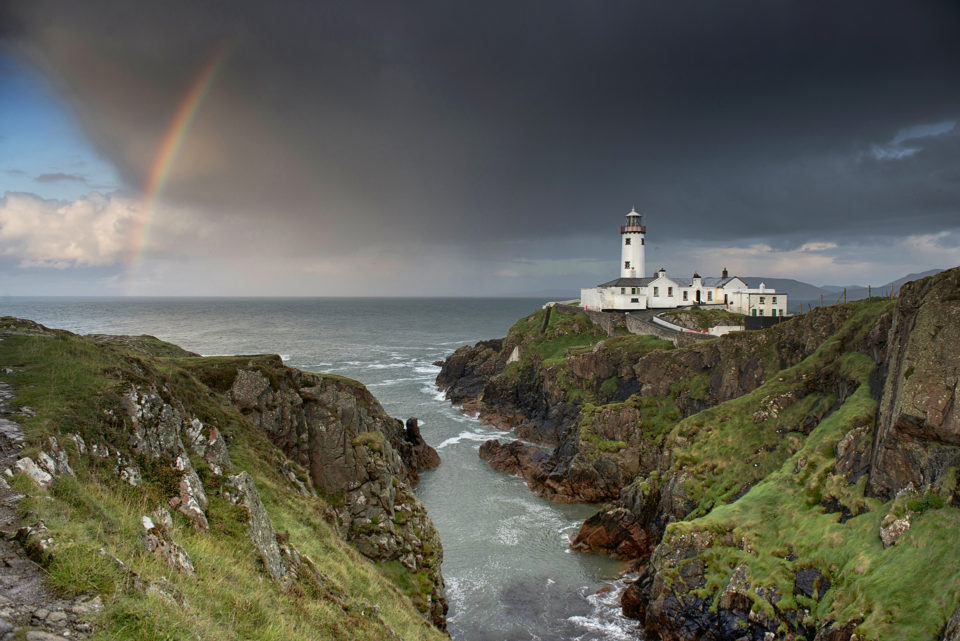 This image from Jolene Hanson is one of those stunning lighthouse pictures where the lighthouse itself is almost pushed into the background. You could chop this image into several separate shots, and each one would be breathtaking. As a storm abates, the menacing clouds lurk over the lighthouse, juxtaposed with the clean blue and the dainty rainbow, assuring the tiny white homestead that all is well, for now. 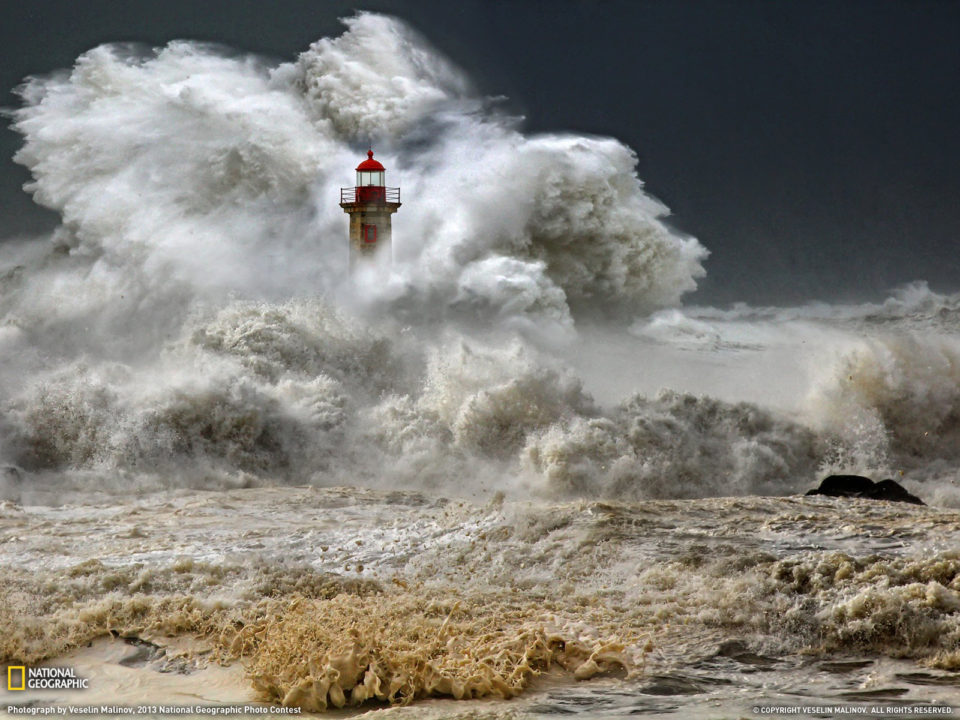 Technically, this is a pair of images blended together. Regardless, it captures the violence that most lighthouses must survive to aid vessels in finding safe harbor. Braving a furious sea off the coast of Portugal, the Porto lighthouse silently states how small humanity’s endeavors are when pitted against an angry Atlantic. 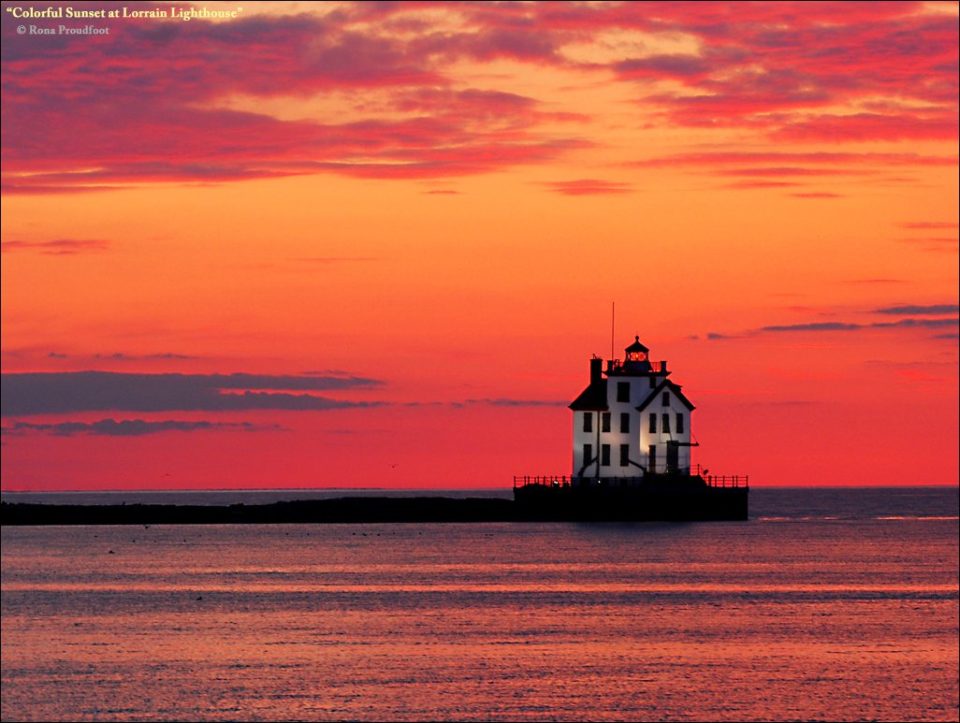 Easily mistaken for a rustic cottage, the Lorain lighthouse rests on Lake Erie. Yet, it is a massive draw for those visiting Ohio due partly to its charm when placed against the brutal storms that will often whip against it. 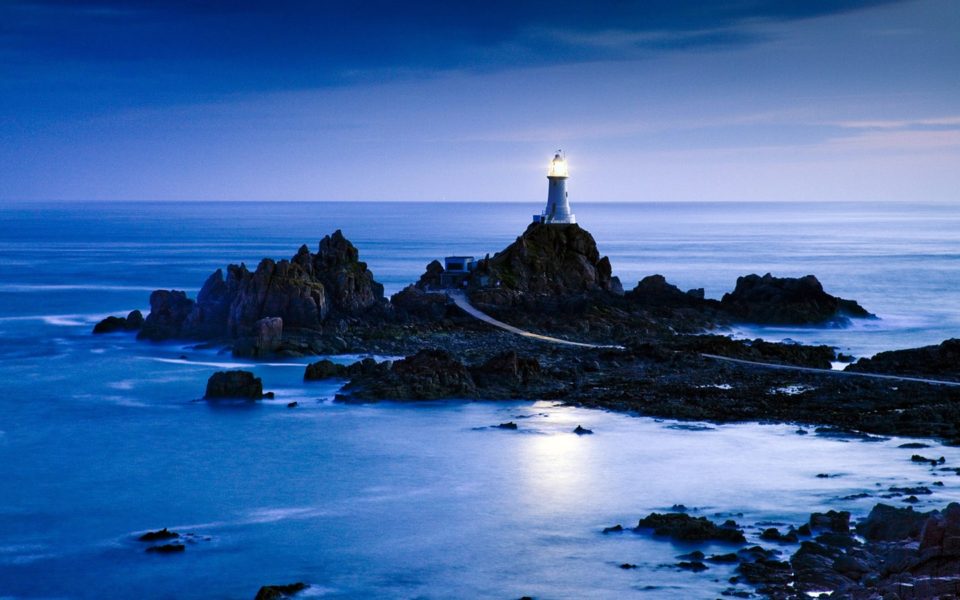 This shot of La Corbiere is another photo that could easily be mistaken for a painting. Pre-dawn blues color the landscape, offering a sense of peace and serenity that embodies the spirit of the lonesome lighthouse and the tiny strip of road that connects it to the world. 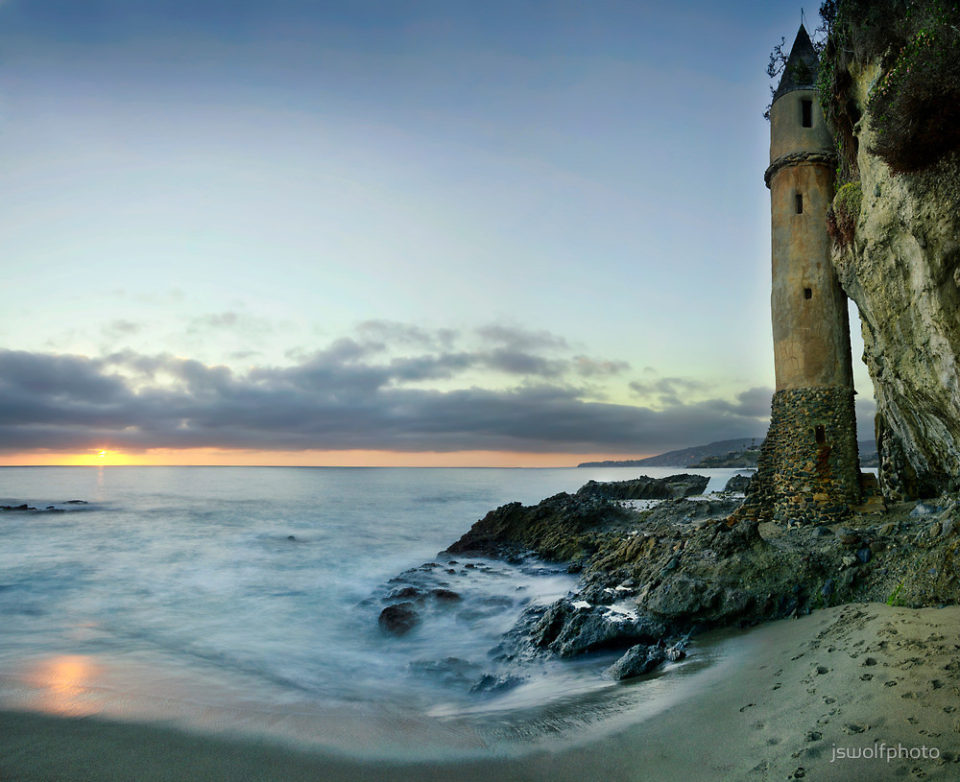 The Victoria beach lighthouse is a curiosity of a bygone era. It is nestled against the cliffs rather than standing proudly above them. Few take the time to climb and capture a shot like this. However, all California natives know that it’s well worth the hike.

Tower of Hercules by Anibal Trejo 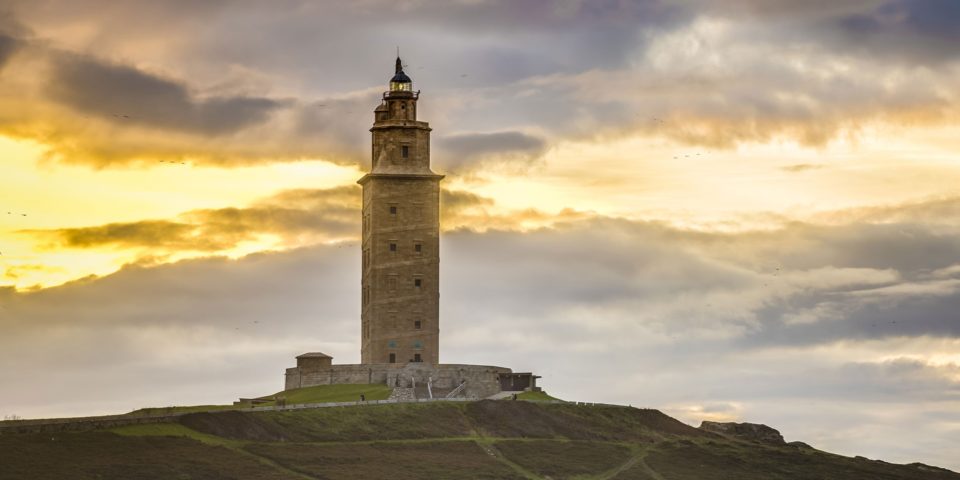 Constructed in the age of the Holy Roman Empire, this is the only lighthouse from that time that still operates today. While much of Rome has fallen to ruin and rot, due to the sea air and neglect, the Tower of Hercules has been maintained through millennia to keep ships of every nation safe.

Built in the second century AD, this is the oldest extant lighthouse in the world. Moreover, it was built using the original plans set aside for the Lighthouse of Alexandria – one of the seven wonders of the world. 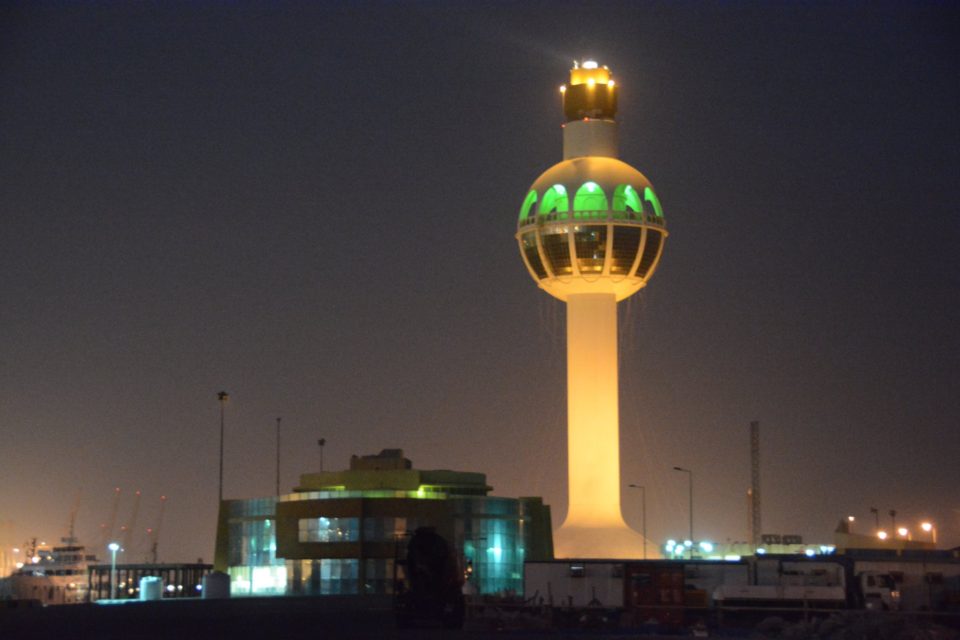 Completed in 1990, the Jeddah Light of Saudi Arabia is the largest lighthouse in the world. While not as impressive from an architectural perspective as many of the others on this list, it is still a modern marvel. 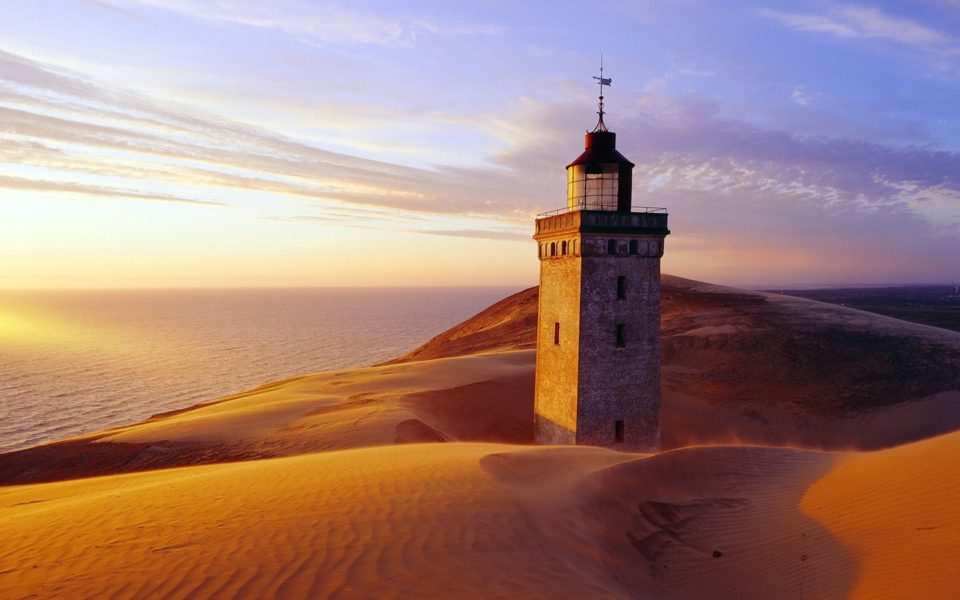 Part castle, part machine, this small Danish lighthouse bears a low profile due to being placed atop a sandy region rather than sunk into bedrock like many of its cousins. Beautifully rendered, it’s an indicator of how even the land can pose a problem for these stalwarts of the shore.

Built in 1900, the Rubjerg Knude lighthouse is just 23 meters tall. However, due to the ongoing erosion of the cliff face and fears that the lighthouse may one day be lost to the sea (estimated for 2023), it was decided to relocate the entire building. The move took place in 2019 using specially designed rail tracks.

Galle Lighthouse, Sri Lanka by Gallop Around the Globe

The lighthouse of Galle is located inside an ancient fort. The current version was built in 1939 on the same site as its predecessor, which was sadly destroyed by a fire. However, with a history dating back to 1848, it is still regarded as the oldest lighthouse in Sri Lanka. The beach, blue sky, and palm trees only highlight this remarkable structure, making it a must-see landmark for any tourist.

The lighthouse at Makapu’u Point is something special. Not only is it located in one of the world’s most scenic spots, but it boasts another claim to fame. Constructed in 1909, the Makapu’u lighthouse is recognized as having the largest lens of any lighthouse in the United States. In addition, it was the first lighthouse in Hawaii to be equipped with a radio beacon.

A very isolated building, the cliffs upon which Makapu’u nestles are popular with hang gliders. One can only imagine the beauty of what they see.

Originally built in 1656, the Lindesnes lighthouse has gone through several incarnations. The most recent rebuild occurred in 1915. The lighthouse was captured by the Germans during WWII and became an armored fortress. Moreover, it was regarded as a very important watchpoint for the duration of the German occupation.

An Illuminating Look at the Very Best Lighthouses

There is no shortage of lighthouses in the world. From active houses to long-abandoned coastal guardians, left to slumber and face the storms alone. The above collection of lighthouse pictures is not designed to highlight just the biggest or the best. It is to showcase these structures as a whole. It is an homage to these coastal custodians who keep guard over our shores without complaint.

Through all of the advancements in technology, the lighthouse remains of the most steadfast requirements for any coastal town or port city. As these pictures capture, they are the unsung maritime heroes and deserve every bit of credit and adulation that comes their way.