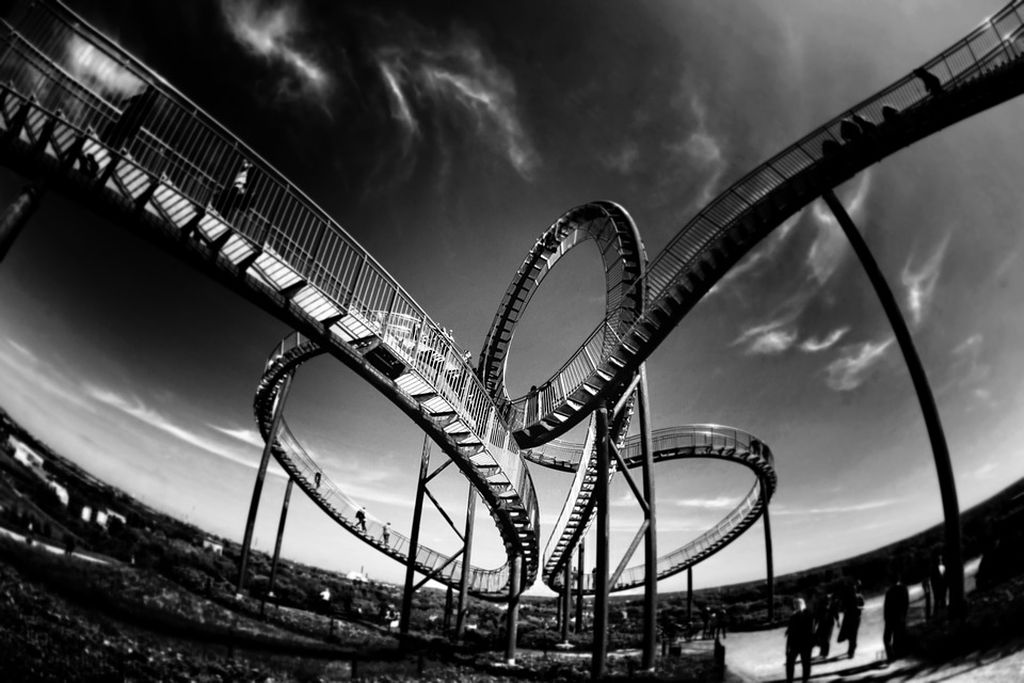 Our lives are full of fear. As adults, we fear that our kids are going to grow up to resent us. Others are afraid of being fired or passed over for a promotion. Many understand the anxiety-driven fear of a cheating spouse, or worse, the sheer terror that the bagel shop will run out of the jalapeno cheese yet again. Fear makes life hard, but it can also make life amazing; if you experience it in small doses. Say, by riding some of the world’s most terrifying roller coasters.

The key to conquering fear is not to hide it away in a dark corner, where it’s just going to grow stronger. Instead, we must learn that fear is a part of life, a great motivator, and a facet of existence we’re never going to escape. That’s why we should jump right into fear, scare the hell out of ourselves, and get it over with. When you’re ready to do that, we’ve found the 16 most terrifying roller coasters to work out all your panic.

Opened in 2021, Jersey Devil is possibly the newest and most terrifying roller coaster in the world. It also happens to be the current record holder as being the tallest, fastest, and longest single rail roller coaster ever built. To put that into numbers, we are talking 3000 feet of track and 130 feet elevation. The Jersey Devil hits a top speed of 58 miles per hour and offers twists and turns, thrills but hopefully, no spills.

When you really want to get your heart racing, nothing does it quite like a broken track. The Gravity Max hits a point where it simply ends, dumping you down like a rag doll for 34 glorious stories after it flips you upside down.

The fastest giga coaster anywhere in the world, the Fury 325 will whip you the hell back and forth across the line between Carolinas at a shrieking 95 mph. It rises higher into the air than the Statue of Liberty and has an 81-degree drop that will put your stomach a foot over your head.

The highest this goes is a scant 141 feet, but then it winds you through a decline that weaves inward, giving you a moment where you feel like you’re going to crash into both the wall and the floor.

A groundless coaster that dangles your tiny tootsies more than 200 feet in the air, leaving you to enjoy the view before the inevitable plummet. Then it whips you around and around on the spin cycle, turning your mind and guts to mush before doing it all over again.

When you find yourself tucked into one of the fiberglass shells that feels a little too much like a bullet for comfort, only then will you get the complete understanding of what you signed up for. There’s a nasty 84-degree drop that is enough to get your juices flowing, but the real story is in the tight twirls you’ll endure along the straightaways. Schedule this before the funnel cake and corn dogs.

Full Throttle doesn’t waste a second, kicking you out of the chute at 66 miles per hour. From there, it goes along the largest vertical loop on the planet, inverting you as you swing helplessly 160 feet in the air. However, don’t worry about missing the view because gravity will force your eyes open, searing the reversed world into your brain.

The vertical loop on the Thunderbird doesn’t even go over the 150-foot mark, but that’s the largest for any wing coaster anywhere. Instead of keeping your arms and legs safely inside the vehicle at all times, The Thunderbird lets it all hang out. One of the first wing rides in the United States, the lack of a place to plant your feet makes the upside-down spin many times more horrifying.

When talking about the most terrifying roller coasters in the world, then you cannot ignore The Smiler. While innocently named, it is possibly nothing but dry British wit at its very best. The Smiler offers more inversions than any other roller coaster in the world.

Opened in 2013, The Smiler tops out at 52.8 miles per hour. It might not be the fastest roller coaster in the world, but 14 inversions in under three minutes make it a beast of a ride.

You will also hit 4.8G as you hurtle along the track, unsure which was it up and which is down. But, by the time comes to a finish, you will have a better appreciation for everything poor Ender went through during his training and a smile not so much of delight but of survival.

It isn’t especially tall, and it isn’t especially long. At first glance, Sky Scream looks gentle and curving, like a streamer caught in a summer breeze. However, once you hop aboard and see how many 360-degree loops you’re going to endure at unexpected times, you will understand what makes this ride so terrifying. Sky Scream will blindside you so many times; you’ll be a little on edge for hours afterward.

Coming in at a staggering 456 feet, Kingda Ka is the tallest roller coaster in the world. It’s daunting to look at from the ground and far worse when you hit that long sideways slope that’s going to leave you breathless (and probably a little damp) when it allows gravity to take its wicked due. Far from a one-trick pony, Ka has slopes and slithers that put your pacemaker to the test.

The story here isn’t the 208 feet you’ll climb before being sent down a 116 feet concave drop. However, the underground tunnel burrowing 20 feet into the Earth is what puts the Cannibal above – or below – the rest. Even knowing you’re going to survive, as you plunge toward the underworldly darkness, a little prayer will slide through your lips.

The Hades 360 goes upside-down, which isn’t remarkable in itself. What does make it enough to sweat through your Under Armour gear is that it’s the first wooden coaster to do so. Going along on those rickety timbers, knowing it’s only them and a bit of physics jargon keeping you from flying off, will thrill you in a way no metal monstrosity can.

Don’t be surprised when you get handed goggles at the beginning of this ride. It’s the fastest roller coaster in the world, reaching 149 miles per hour in less than 5 seconds. You’ll be glad it’s the 6th longest steel coaster in the world because otherwise, you’d blink and miss the ride.

The splashdown on the Diving Coaster is anything but soothing. Oh, it’ll cool the sweat on your brow, then take you through a tunnel beneath the waves that will drive home those drowning fears. So if you’ve ever wanted to be waterboarded by a coaster, here’s your chance.

Being dropped over and over again on this high/low roller ride is just part of the fear factor. The wooden construction is the other part, creating a jittery feel to the ride that keeps you sweating bullets each time you take yet another 100-foot slide.

Opened in 2008 in the Everland theme park, comprising three six-person carriages, T Express offers an overall drop of 150.9 feet and hits a top speed of 64.6 miles per hour. The T Express is a serious rollercoaster and propels itself onto our list of the world’s most terrifying roller coasters.

Another winner in a sub-category, The Banshee is the longest inverted coaster you can find on this planet. All the blood rushing to your head will provide you with additional cognitive powers, allowing you to wonder why you do this to yourself.