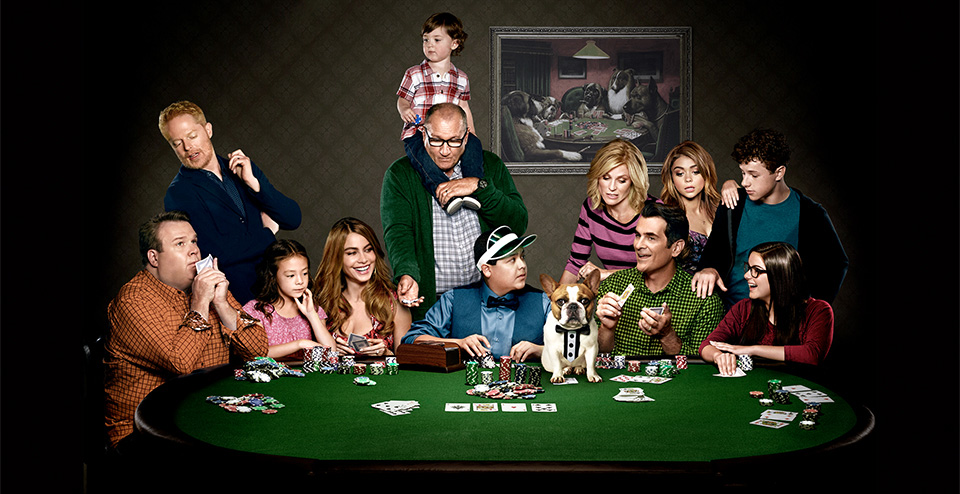 It’s officially Autumn. The air is crisp, the leaves are changing colors, and some of the best TV is returning to small screens and mobile devices everywhere. From Modern Family to Empire, everyone in your circle is going to be watching these TV events. Why not do it together? Get the details on which shows are worthy of a viewing party, and how to hook new fans into the show of your choice.

At first, the concept sounded dubious — boyish SNL vet plays buddy cop slacker. Then the critical acclaim rolled in. Brooklyn Nine-Nine is crushing the awards circuit and raking in great reviews, and it is poised for another awesome season starting this month.

Season 3 of Brooklyn Nine-Nine starts streaming on Hulu on Monday, September 28th. It’s the perfect show for a mid-week watch party, and it’s an easy cast to sell to friends. Andy Samberg is lovably hilarious, and Terry Crews was made for this role.

After 6 seasons, you probably know this family as if it was your own. Season 7 of Modern Family is here, continuing the story lines of one of the most popular shows on the planet. It’s special not just for its humor, but it’s relatability — and that’s why we’ll be watching it with our family this fall.

Season 7 of Modern Family premieres on Hulu on September 24th, and if you want to invite new fans to the show, start with the classics. The best primer from season 6 was “Connection Lost”, an hilarious coup de grâce of digital paranoia.

The Last Man on Earth

A refreshing concept like this one rarely comes to television. Fortunately for fans of great TV, Will Forte nails his role as The Last Man on Earth. The Last Man on Earth follows Forte’s Phil Miller from loneliness to discovery, and the realization that social relationships are just as difficult when there are only a few left. If you’ve seen the show, you’re likely hooked. It’s a smart show written for a smart audience that enjoys well-crafted, thought-provoking humor.

The Last Man on Earth is nominated for four Primetime Emmy Awards, and good things are in store for its Season 2 premiere. The show begins streaming on Hulu on Monday, September 28th, a perfect choice for casual, relaxed watch parties. If you’ve been following along, you’ll remember the cliffhanger Season 1 finale: revealing that Miller’s brother — played by Jason Sudeikis — is alive and well. Season 2 should start with a bang.

Hands down, Black-ish is one of the best new comedies on television. Despite having half of the viewers of Modern Family, it’s every bit as hilarious and at times, moving. If you’ve watched it, you likely identified with main character Dre Johnson, whether you’re black-ish yourself or not. It’s more than a show worth watching, it’s a show worth sharing — and it’s the right time to plan a fall season watch party.

Season 2 of Black-ish begins streaming on September 24th on Hulu. The clip above should be enough to hook your friends in to joining a watch party, but if not, episode 15 of season one “The Dozens” will get ’em sold.

The best part about this Hulu original is that you don’t have to wait for the premiere. The critically-acclaimed Difficult People just completed its first season run, meaning the full show is now available to stream. That means a fall TV watch party doesn’t need to stop when the first episode is over. Queue it up and enjoy, all at your leisure.

Difficult People follows two NYC comedians who fiercely hate just about everything about the world around them — save for each other. The daily disgust generates some amazing, even shocking humor that comes to you entirely unfiltered. Think of it like Louie meets Parks and Rec, but with a mouth full of South Park language.

Nearly 18 million people watched the season finale of Empire in March. In the final seconds, Empire lead Lucious Lyon was locked in a jail cell with some choice words for the camera. Season 2 of this break-out show will pick up where Lyon’s story left off, and it’s anyone’s guess what happens next.

On Thursdays this fall, this musical hit will steam on Hulu direct to your living room. Invite friends and family to join, it won’t be hard to hook them on the idea. Last season, Empire was the most popular new TV show in America, and it’s primed for big things this season. If your friends are new to the series, tell them to start right at the beginning — all of season 1 is waiting on Hulu.

Fans of The Mindy Project were furious when the cult hit was cancelled after 3 seasons. It’s now back with a vengeance, thanks to Hulu, with season 4 beginning just a few weeks ago. So far, according to the ratings, episode 1 of season 4 was the show’s best yet, with near perfect ratings on IMDB and elsewhere. If you watched the show in its first few seasons, you’re in for a treat now.

New episodes of The Mindy Project will be released on Hulu on Tuesdays this fall. The 67 episodes that came before it are all streaming now, and the first episode of season 4 is ready to watch. That leaves little excuse — watch away, and invite a friend or two, yeah?

This post is brough to you by Hulu. Sit back and catch up on all your favorite shows on Hulu.com!